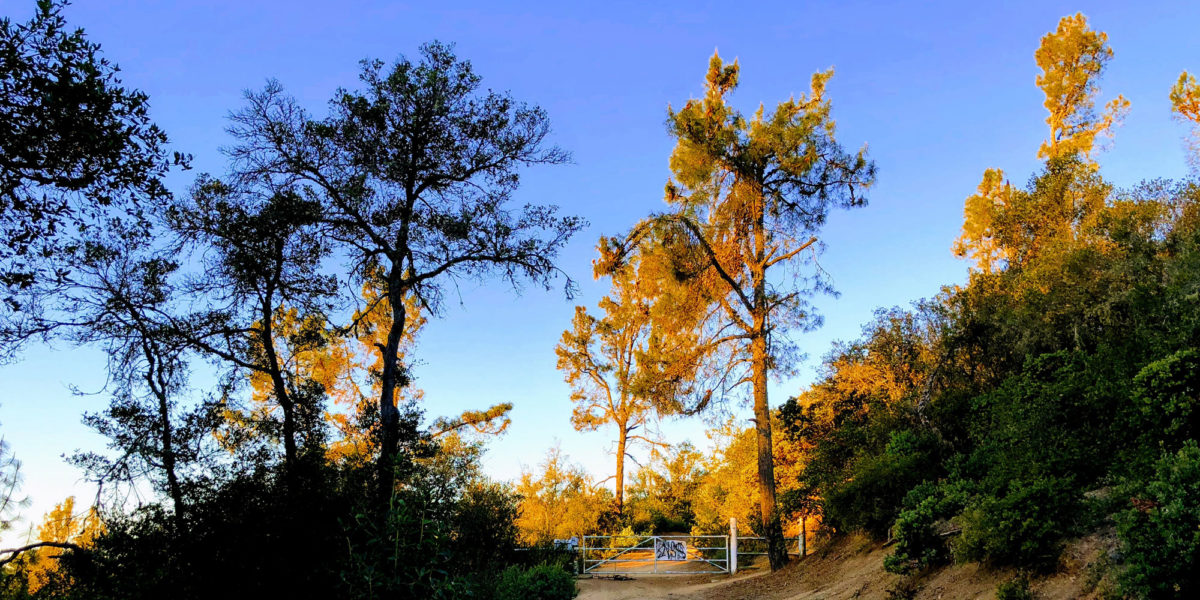 I did this summit last year, in August. It was hot but a fun trip anyway. This year, doing it in February, the weather was quite agreeable. Along with a better antenna setup, I’d be operating CW. More contacts, better chance of success.

I did this summit last year, in August. It was hot but a fun trip anyway. This year, doing it in February, the weather was quite agreeable.   Last year, I brought my sons along for the trip but they would not be joining me this time around.  Things I was looking to improve this time included getting my antenna up even higher, and sloping east if possible.  The ARRL DX CW contest was going on, so I primarily planned to operate on 30 meters for SOTA, then see if I could pick up any new DX on the other bands.

Last time I went, I parked my car on the paved road, where Buzzard Lagoon Road meets Ormsby Cutoff.  Knowing the dirt road from last year’s experience, I decided I’d drive some of it this time.  It was nice and early in the morning, so I wouldn’t have to worry about much mountain bike traffic on it.  I drove about 0.7 miles in and parked at a nice, wide spot in the road, allowing good visibility of my car while remaining completely off the main part of the dirt road.  I turned the car around so I wouldn’t have to do an awkward three-point turn later in the day with more traffic on the road.  I probably could have driven further up the road, but I did come here for a hike. 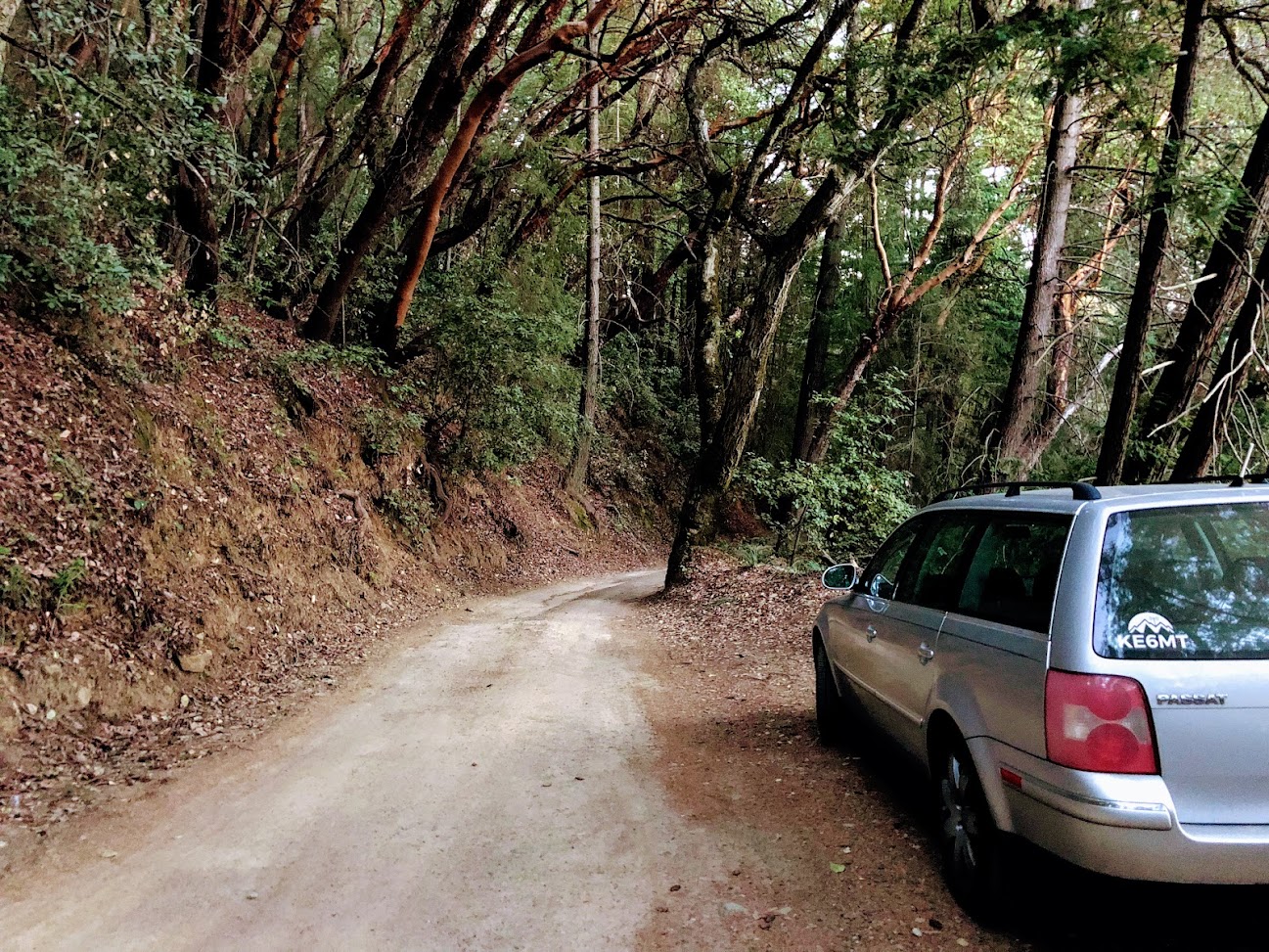 Parked and ready to hike just before sunrise!

The temperature was pleasant, perhaps a tiny bit on the chilly side with little to no wind. I got my gear together and started the hike.  My dog, Tashi, was quite pleased to be getting some outdoor time!  Before long, we were at the point where Buzzard Lagoon Road meets Aptos Creek Fire Road. Turn right here and keep climbing. 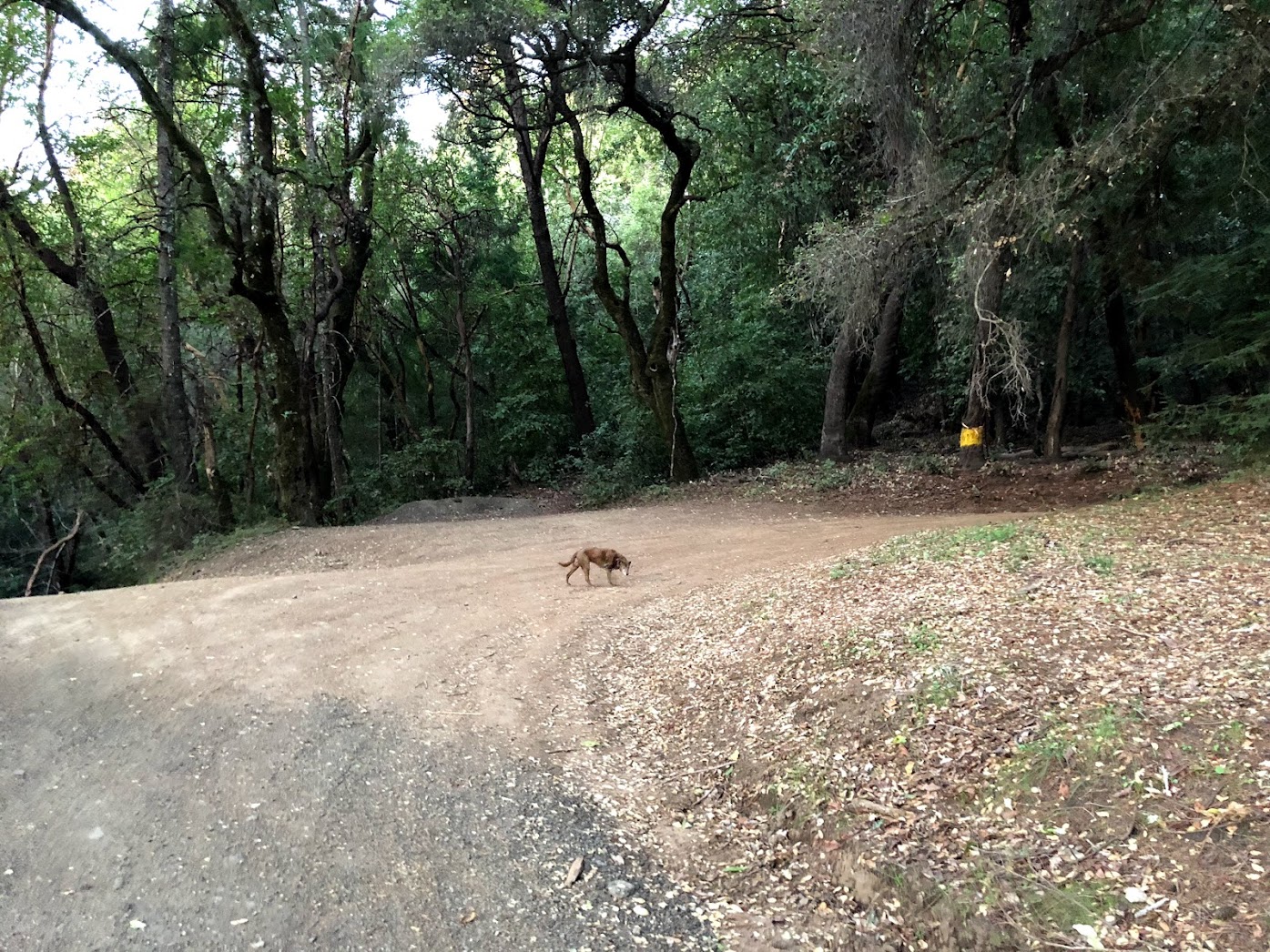 The turn is marked with a yellow-blazed tree

Further up the road, there was a pickup parked alongside the road. This is about as far as I’d feel comfortable taking a regular car up this road – about 1.1 miles. With a high-clearance vehicle you could make it almost all the way to the summit, but there are a number of ruts and other obstacles that would be very tricky in a car, and just not worth it. 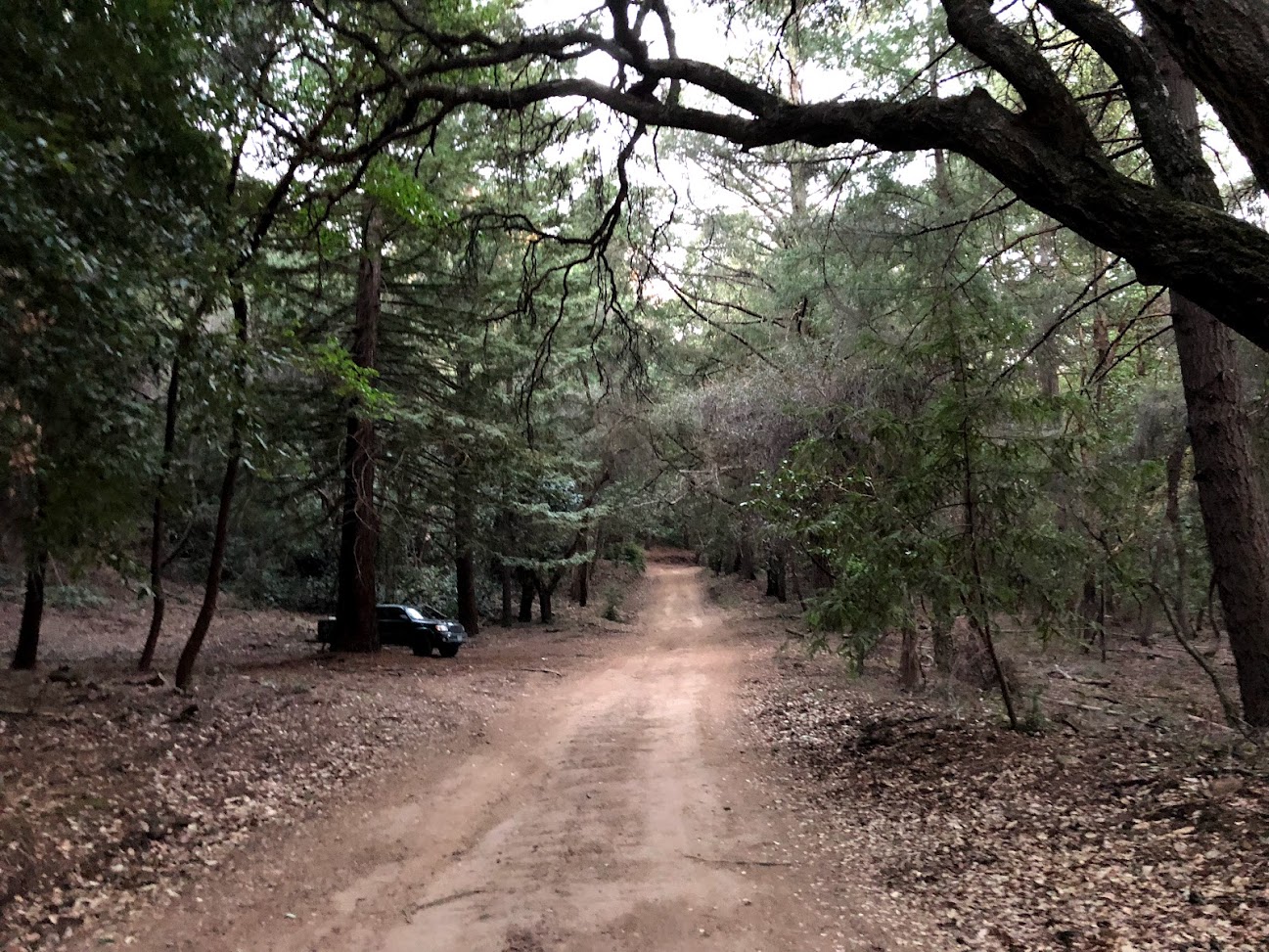 Just past here, there’s a rut that would possibly remove the bumper from a low-clearance car

As I continued hiking, the sun started making its appearance on the trees above. 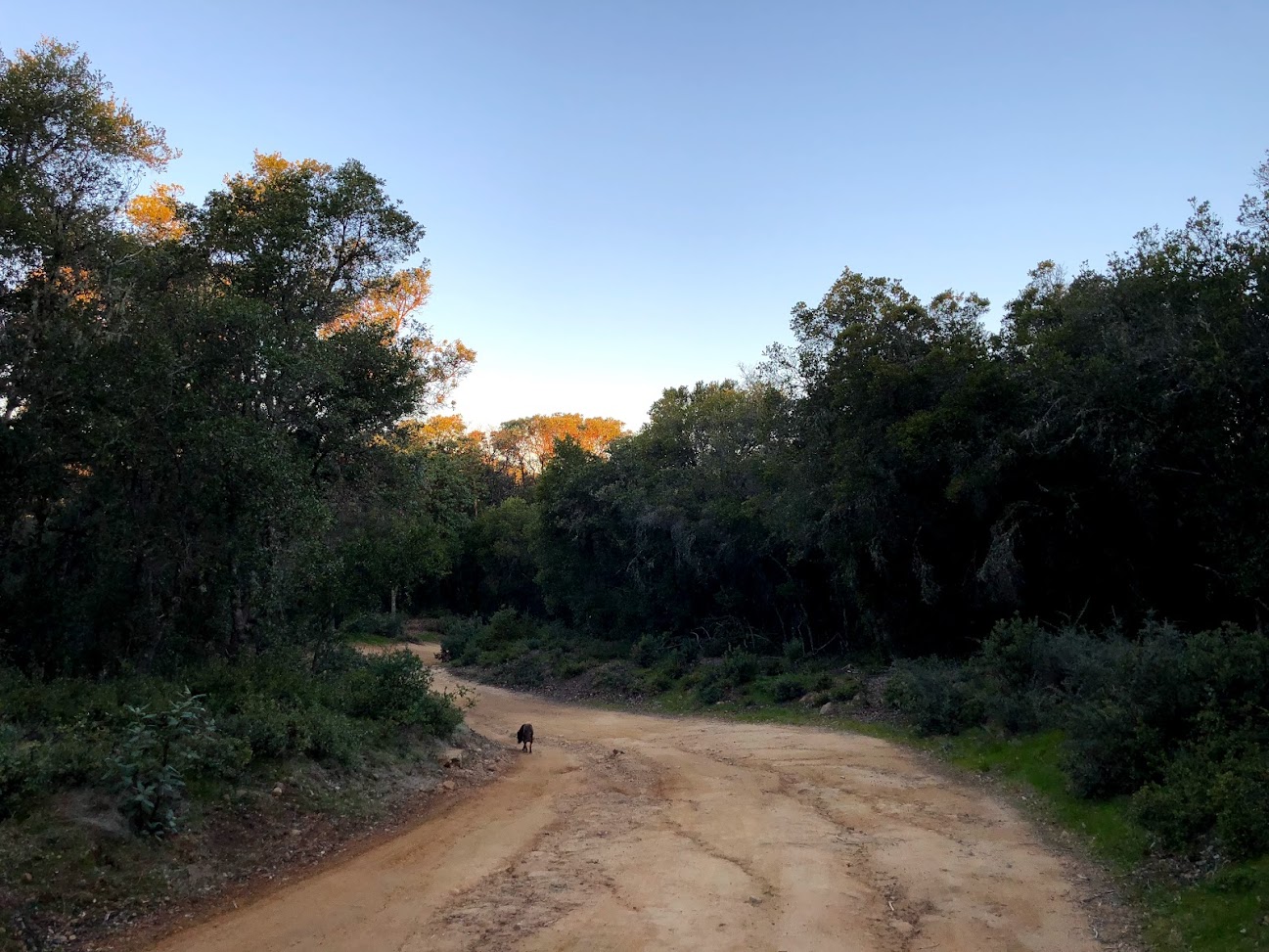 A little over 1.5 miles from where I parked, there’s a locked gate. This implies no vehicle traffic past this point, but it’s totally fine for hikers and mountain bikers. This is about 2.2 miles from the paved road. A high-clearance vehicle could easily make it to this point, and park in the wide area just before the gate. I personally wouldn’t want to take that approach, since there’s a lot of mountain bike traffic on the road. As a courtesy to the primary traffic (mountain bikes) on the road, I would do my best to slowly pass them so as to minimize dust. I’d rather buy a mountain bike and join them—it’d possibly be faster than driving. But if you’re looking for a summit that’s practically a drive-up and you’re physically limited, this is a good option. 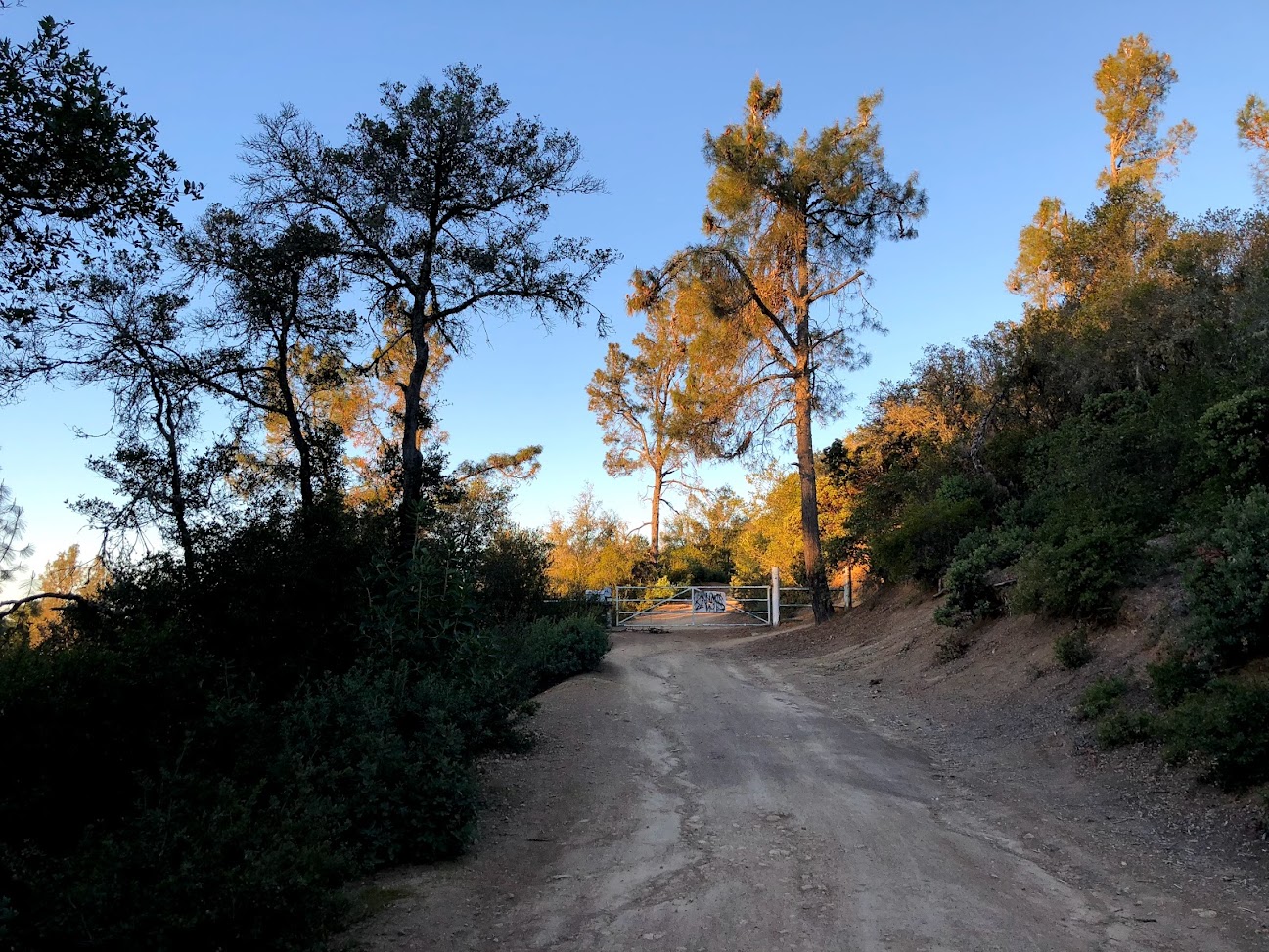 The gate near the summit

About a quarter mile past the gate, there’s a small trail that splits from the road. This trail goes directly to the summit. 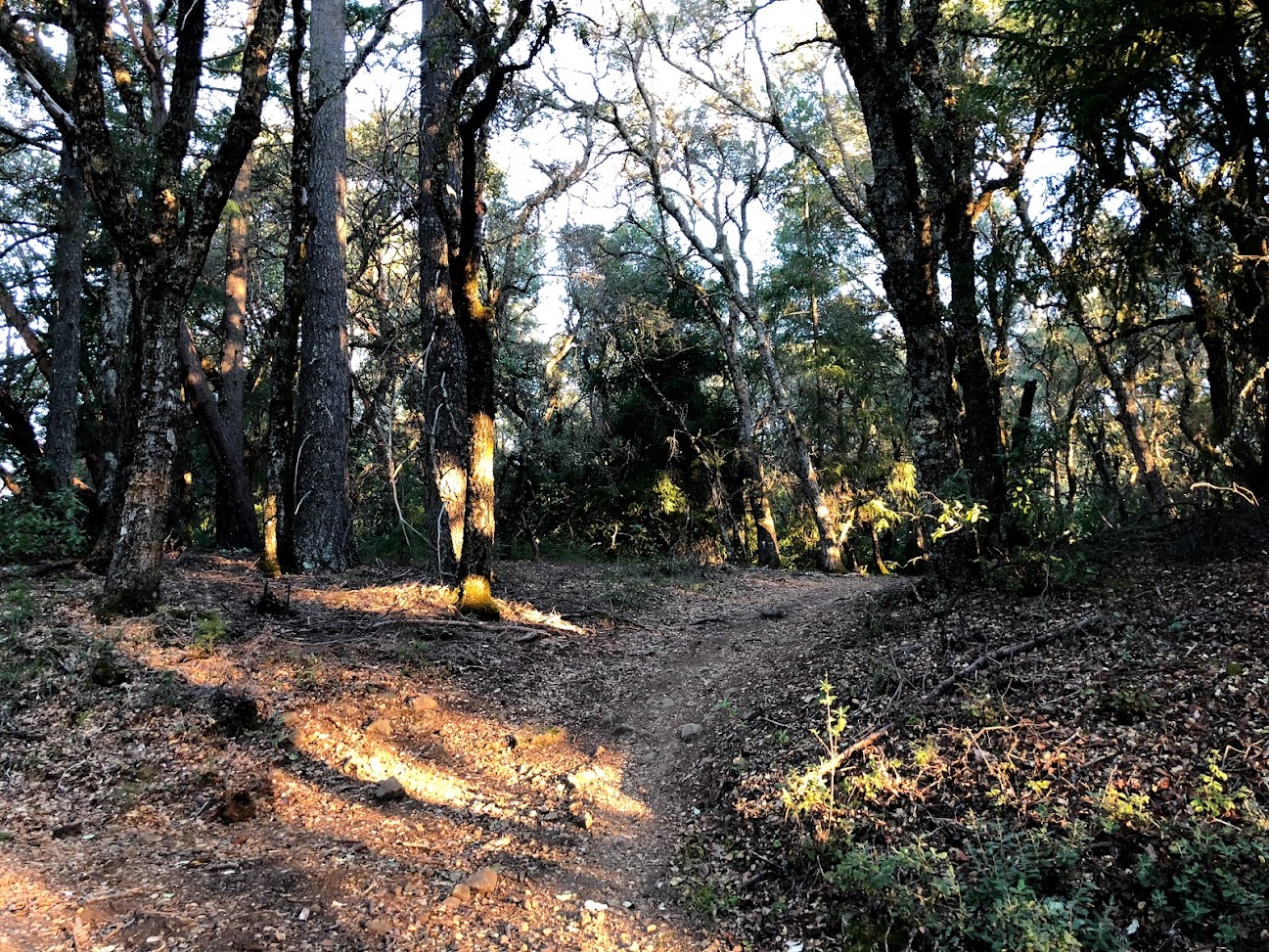 Trail to the summit

It’s less than 50 yards to the summit from the road. It’s kind of hard to tell when you’ve reached the summit, since it’s pretty flat. But there’s nothing higher around, other than the trees. I went off the trail to the right, which put me near the east slope of the summit. The nice thing about doing early-morning activations is that it’s easy to tell which way is east. 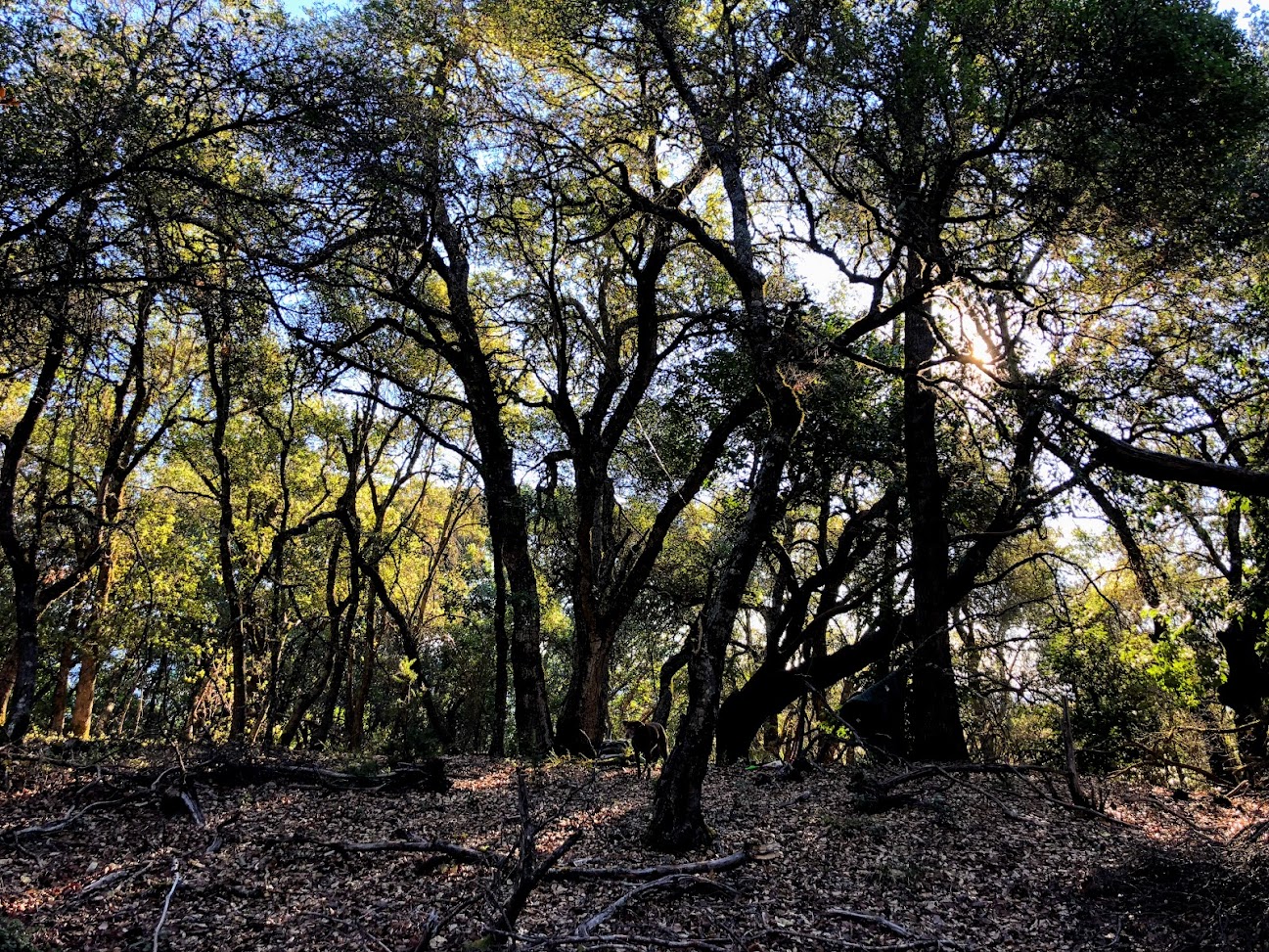 Arriving at the summit

In terms of propagation, I think this summit has a couple of negative points. There are lots of trees, which is great because you can get your antenna up easily. But I think having the trees surrounding your antenna may absorb some of the signal (probably not a whole lot, but some).  And this summit sits to the west of a much higher ridge.  Depending on the takeoff angle of the bulk of your signal, you may have trouble making far-off contacts to the east.  Nonetheless, I set my end-fed half-wave antenna up so that it was sloping to the east, with the high end up about 25-30 feet.  I disconnected the link on the wire in order to do 30-meter operation. I would normally include a picture of my antenna setup, but the photo came out blurry. Maybe next time!

Last time I did this summit, I wasn’t yet doing CW. Since there’s no cell service on the summit, I relied on APRS for self-spotting at that time. For this activation, I’d be relying on RBNHole to automatically spot me once my morse “CQ” was picked up.

I called CQ on 30 meters a few times. I started getting responses after a few calls, at which point I had a tiny pile-up. I worked through this. Then I got a new CW op, Eric K0EAP who came through quite nicely.  I swore to myself since I couldn’t remember his name at the time (we’d conversed via Twitter and email previously), but we exchanged info to complete the QSO. Then I had barely completed a contact with Keith, KR7RK when a wall of QRM (noise from other stations). Apparently, there was some rare DX station working below me on the band and people were just calling over me.  Not wanting to mess around with finding another frequency, I finished up with 8 contacts. 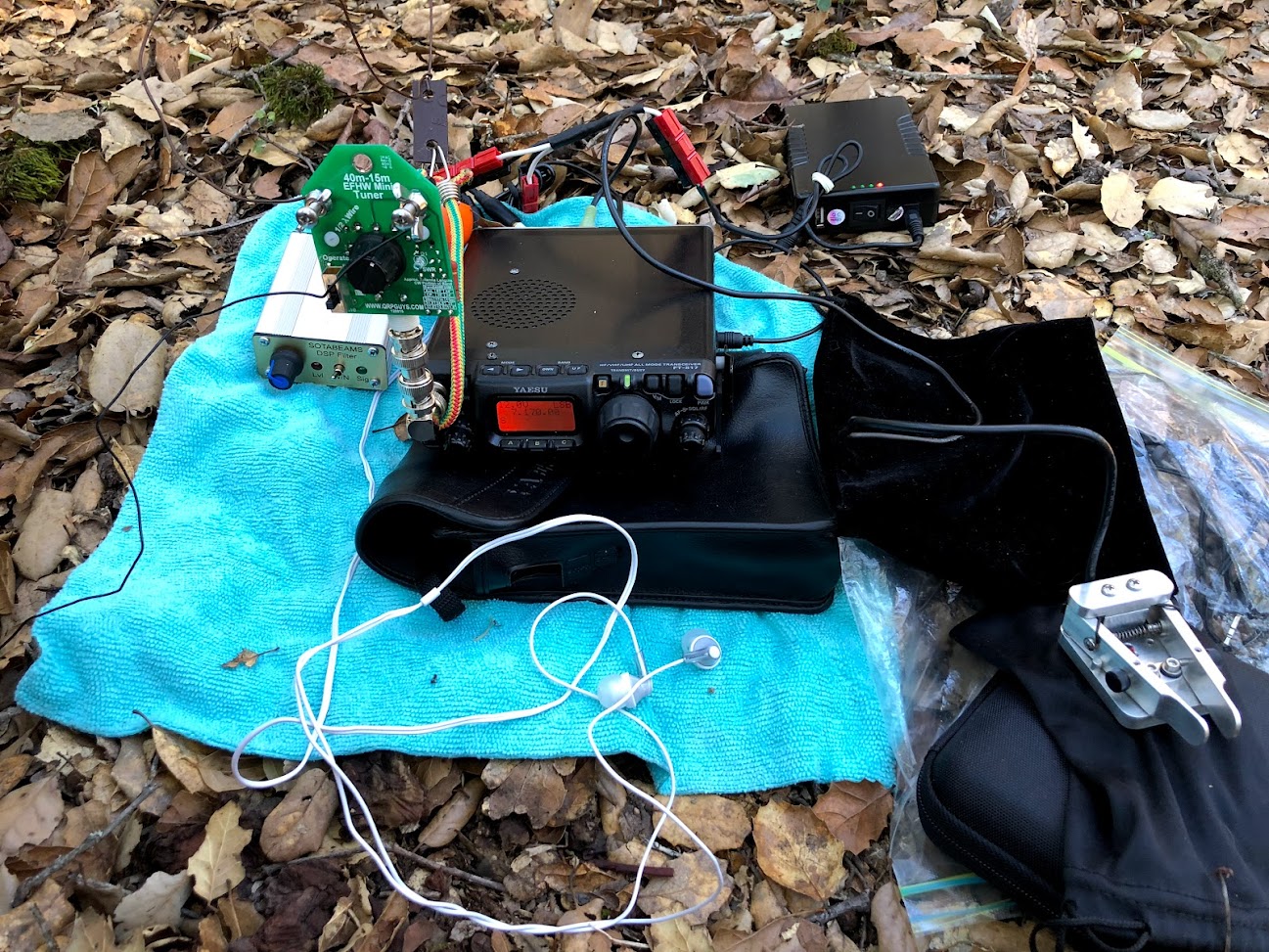 I’d brought my FT-817 for this trip, anticipating possible summit-to-summit with other operators doing activations on voice modes. But I’d forgotten to bring along my list of SOTA Alerts for the day and I had no cell service. I switched my antenna to 40/20-meter operation and tuned around a bit, but didn’t hear any SOTA stations (turns out I was a bit early).

I then switched back to CW and tuned around for DX contest stations. I heard a couple, but they were going wayyyy too fast for me. I managed to get the call sign on one, but it was a US station. The other seemed to be DX, but the signal kept seeming to fade right in the middle of his call sign.

I walked around a bit to see if I could get cell service for SOTA spots, to no avail. So I packed up and hiked back.