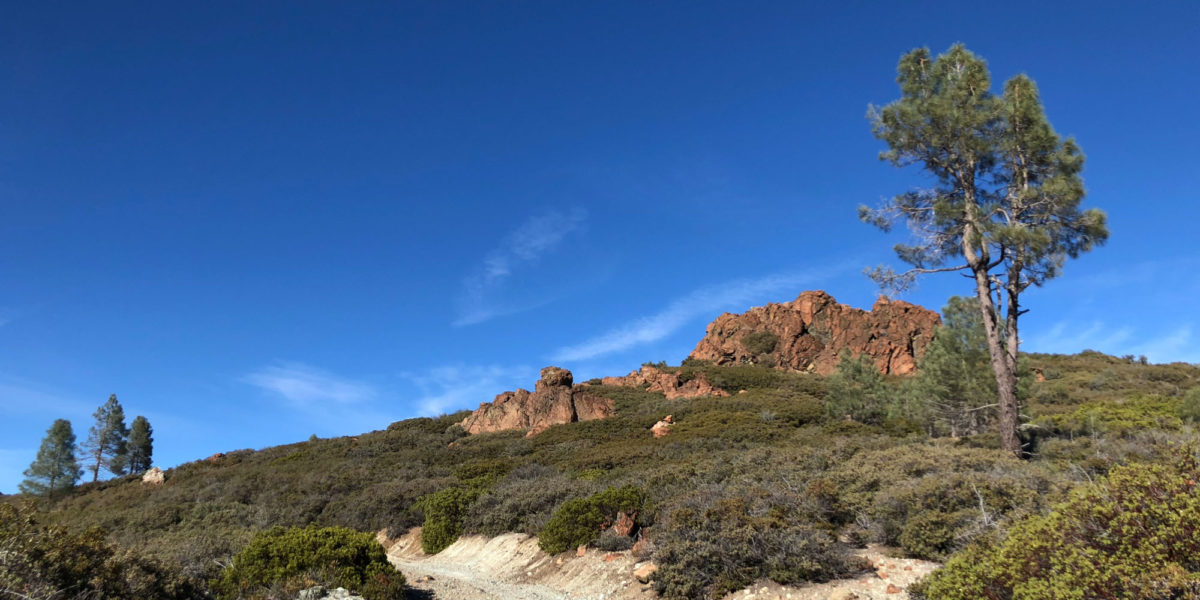 This (almost) drive-up summit was one of the most difficult “easy” summits I’ve activated. After having completed the intense bushwhacking on Peak 4850, I was looking forward to an easy summit. This one would turn out to be deceptively hard, thanks to a crazy guy on a dirt bike.

See the post on Peak 4850 for the earlier part of getting here. From where we parked for that summit, to the turnoff for Santa Rita Peak, was less than a mile of easy dirt road. We drove to the turnout, noted that it too was closed to vehicles, and we parked there. Right before the turnoff is a BLM sign pointing to the turnoff, noting a distance of .5 miles. 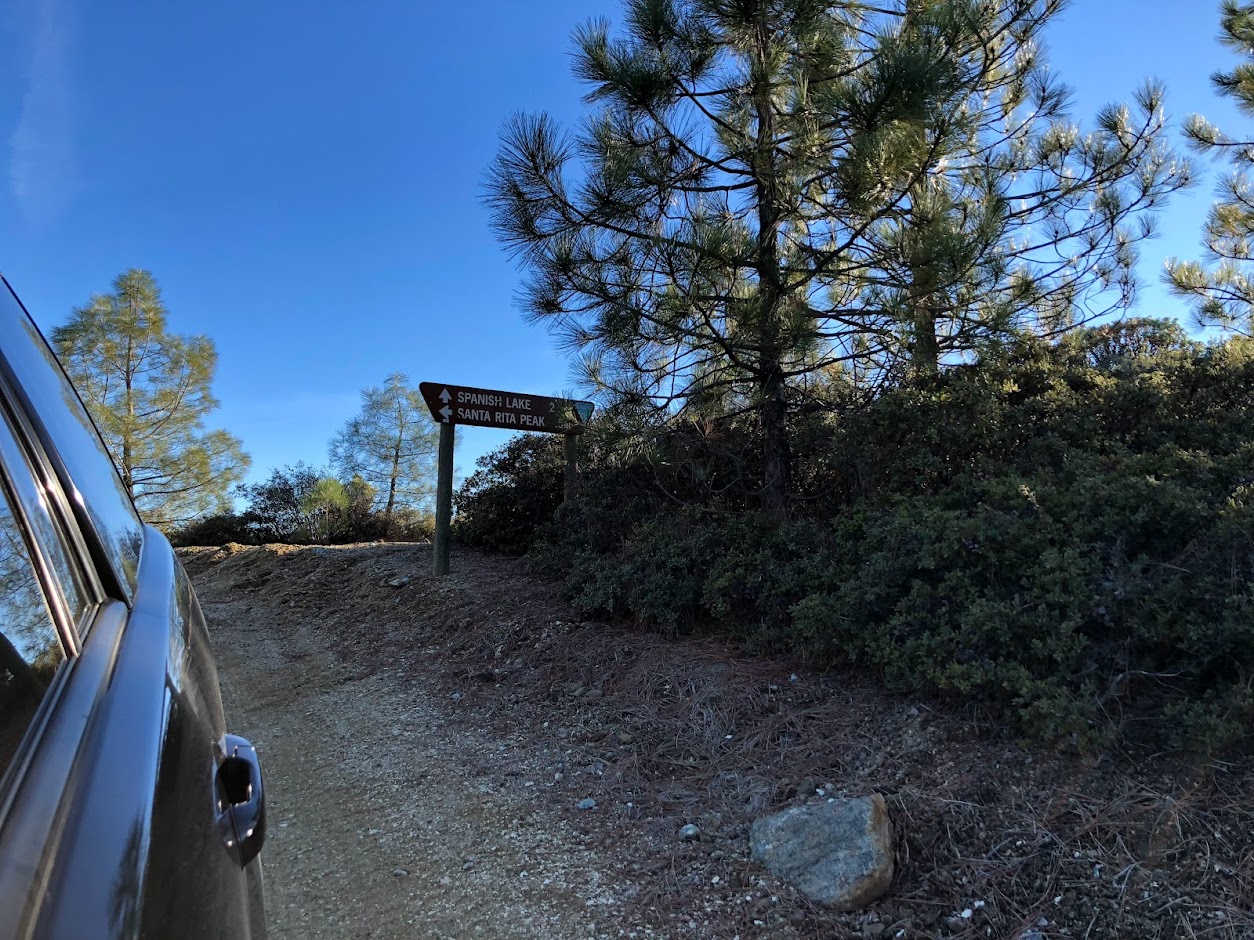 Starting the short walk up to the summit, the peak is in sight. Not seeing an obvious trail to the summit, we took the road that goes back around to a saddle below the summit. 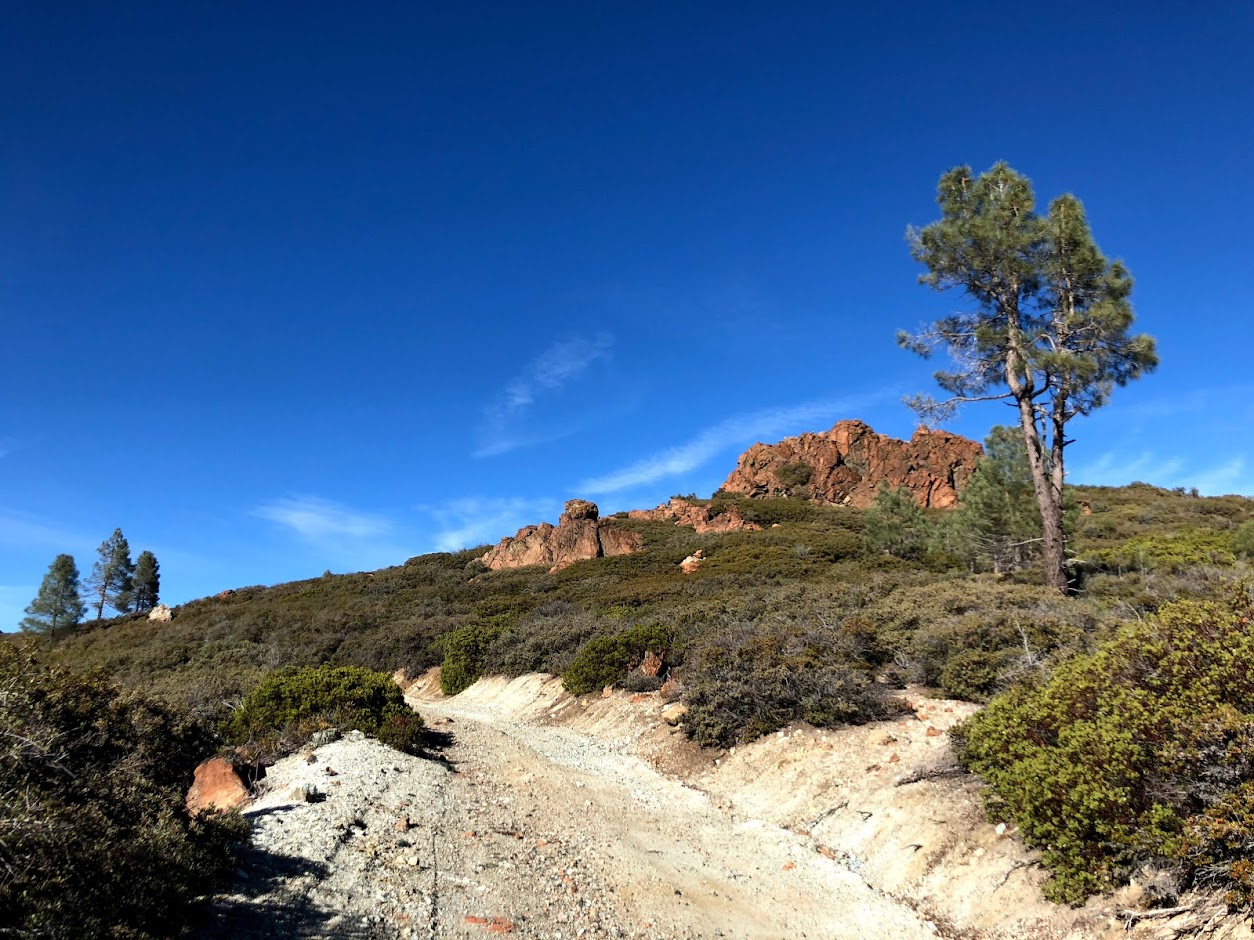 Dirt road to the summit

As expected, the hike to the top was very short. Within minutes, we were at the communications towers that sit on the col below the summit.  There’s a nice trail leading straight up to the summit block, followed by a short scramble to the very top. 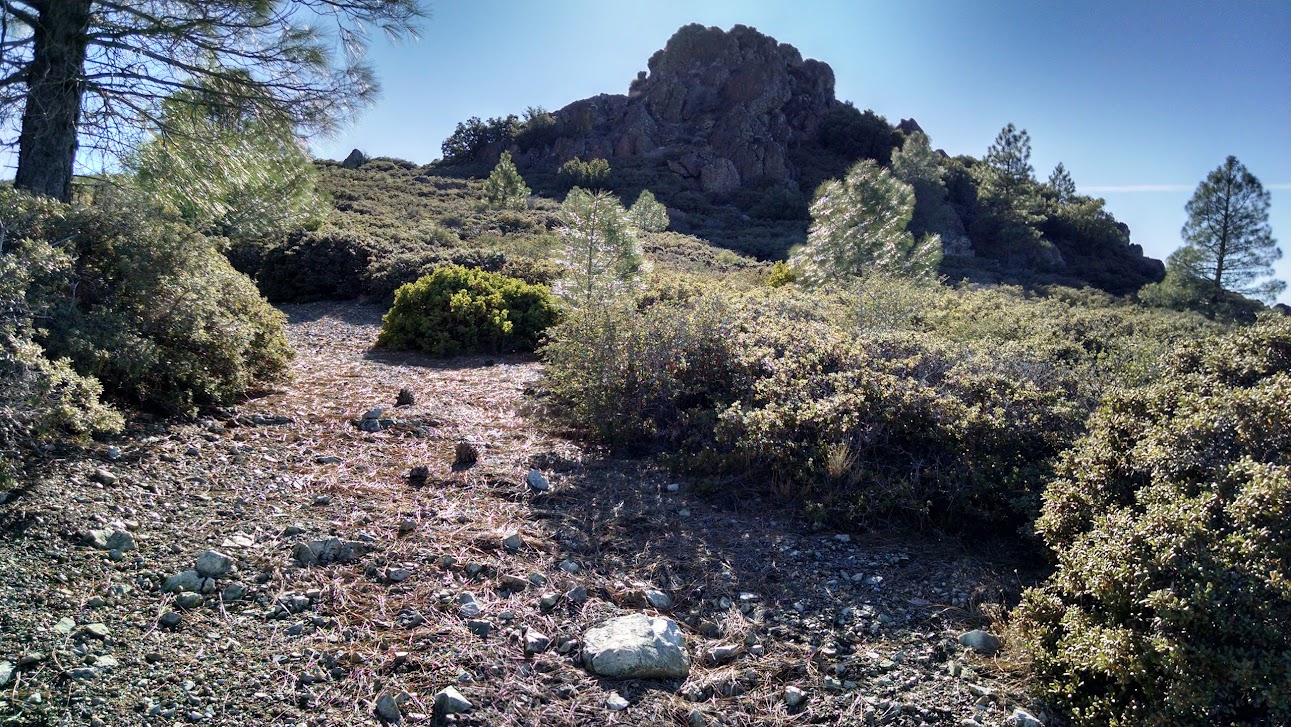 Looking up towards the summit block

Normally, I’d do a 360 shot of the summit during or after operation, but we had to depart suddenly.  However, it seems that someone else did so. Here’s their shot from Google:

Even after doing a few dozen summits, I’m still learning! I almost always use my end-fed half-wave antenna these days, and this summit was no exception. I spotted a good place to put my squid pole, and chose a steep part of the summit to throw my wire, so the pole would hold it up and off the rocks.  The mistake I made was tying my throwing weight to it — 12oz!  I didn’t even think of the impact that would have on my rope and wire once it reached the end. I threw it, and it sailed perfectly to the spot I wanted. But when it reached the end of the slack in the line, it snapped!  Fortunately, from where I was, I could tell that it had simply separated at the knot between my rope and antenna wire. The wire was intact! 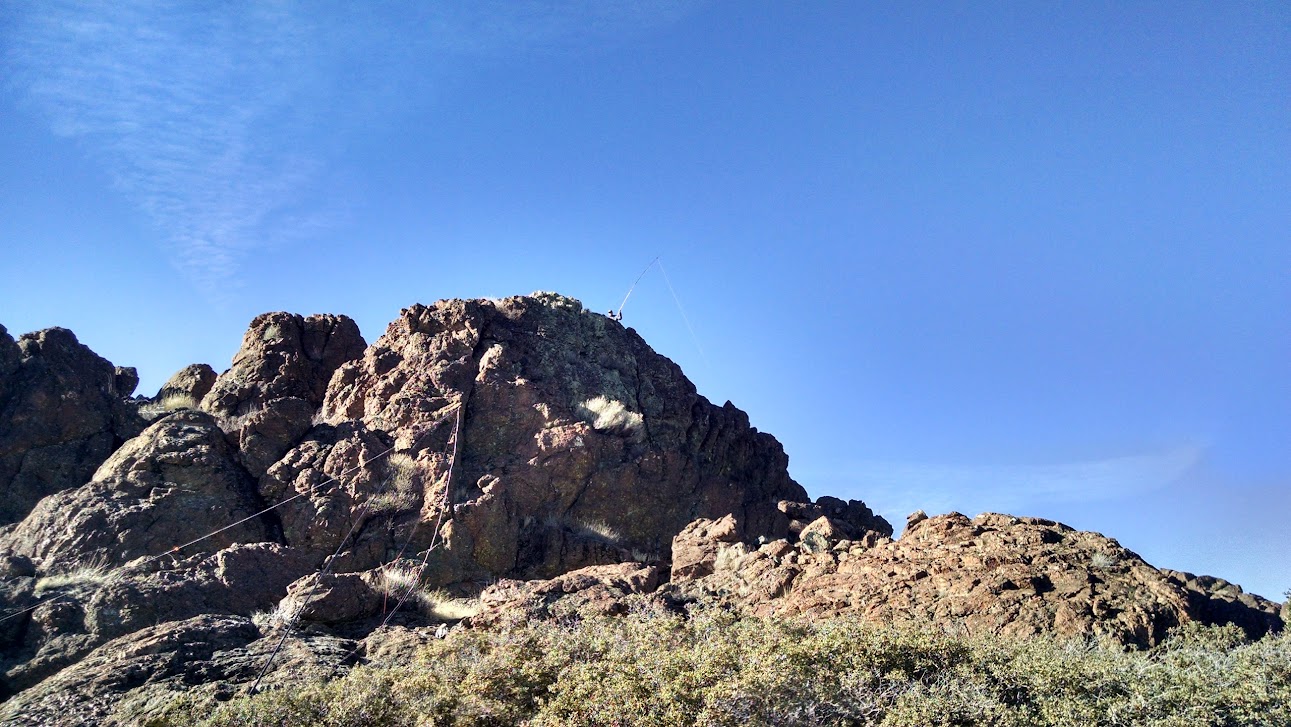 Getting set up (photo by AA6XA)

Jeff and I had agreed that I’d get “first activation” on this summit, so he was waiting for me to get set up and get my first contact. Feeling the pressure to get going, I didn’t go down to retrieve the rope.  I simply pulled the wire back up, tied it to my winder, and threw that over the rocks. I extended the pole and sat down to tune and start operating.

Since Jeff and I weren’t within easy earshot, he’d pointed out that we both have handheld radios that would allow us to communicate. I radioed him to let him know I’d had antenna trouble but that I’d be set up and operating soon. I didn’t have any cell service, so I went straight to calling CQ.  A few minutes passed without calls, so I asked Jeff if he had service.  He had marginal service, so he offered to use SMS/text to spot me.  I kept calling CQ and started getting calls back.  I also heard a dirt bike off in the distance.

I got one contact, K0LAF.  I then called Jeff on the HT to ask if the spot had gone out (so I’d know if I needed to give the reference).  He didn’t answer right away.  I called him again.  He responded with “there’s someone here telling us to leave.” Uh, OK! I got back on the HF rig and sent “QRT” twice, to indicate I had to stop.  I wish I could have provided more explanation, but it’s the best I could do.

I shut everything off and stood up to see what was going on (I couldn’t see Jeff when I was sitting).  I saw a dirt bike, and a guy with a helmet standing there talking with Jeff.  I waved, and he told me to come down from the top, that I couldn’t be here.  I let him know I had to tear down my setup.  He then said something about “you had a permit for access to public land, not to set this stuff up” or something along those lines.  He then said that if we had asked the office, “they might have just said yes.”  I was pretty confused at this point, but rather than try to argue from 40 feet above, I just packed up.  While I was packing up, he continued talking to Jeff, and I overheard something he said about “treasure” being on a mountain nearby.  At this point I had to conclude he was either crazy, or had no idea what we were doing and assumed it had to be something against the rules.

I had hoped to pack up fast enough to get down and talk with him, but he rode away as I was climbing down from the top.  You can see Jeff’s side of this in his trip report.  He apparently rode up and said “what are you doing on my mountain?!” He told us to check the BLM map.  We only had printed topo maps with us, so we hoped to get cell service later on and check the map.

Just below the summit, we called out on VHF and UHF and made one more contact.

We headed over to the next summit for the day, San Benito Mountain.  We parked and got out to hike there, and I saw that I had service, so we pulled up the BLM CCMA map.  Sure enough—it clearly shows Santa Rita Peak (and our other planned peaks) solidly within the boundaries of public BLM land.  So we resolved to go back to the summit after we finished with San Benito Mountain.

Back to the Summit

After finishing at San Benito Mountain, we drove back over to Santa Rita Peak.  The sun was going down by this point, which we knew might make things difficult on HF.  The temperature was also quickly dropping. But boy, what a beautiful sunset! 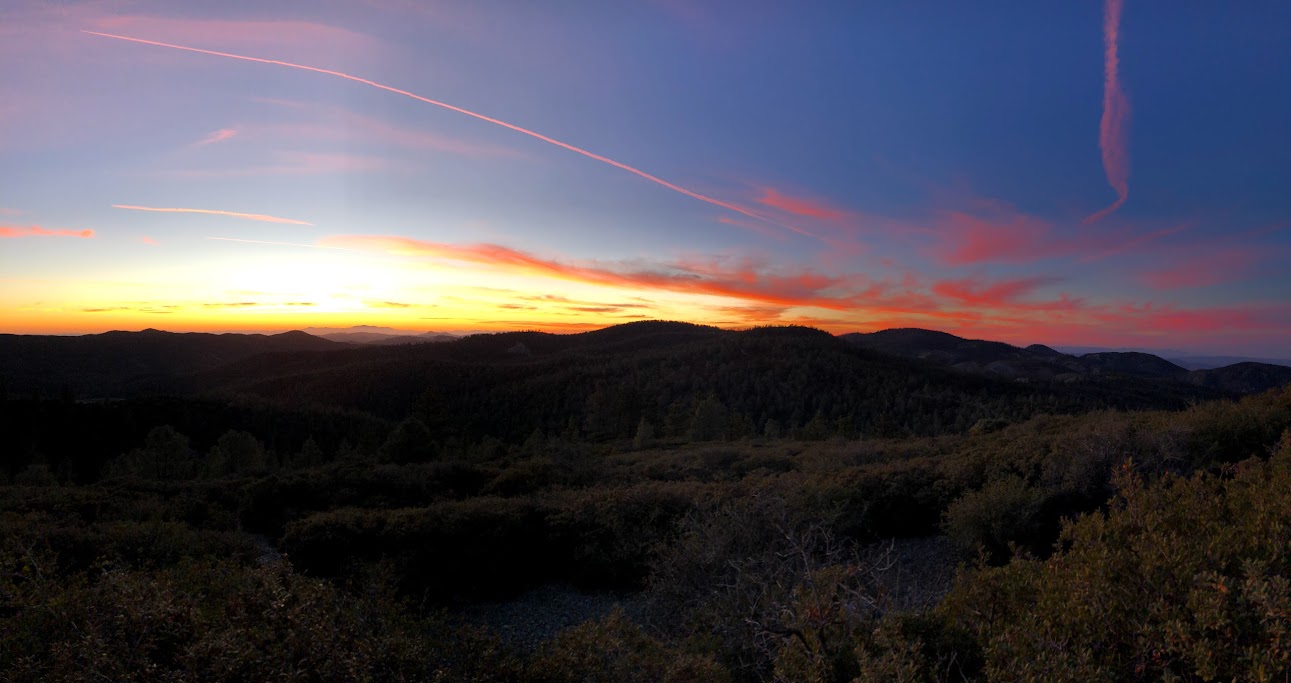 Sunset from below Santa Rita Peak

On the way over, we’d agreed to just set up Jeff’s KX-3 and antenna, and take turns operating.  We arrived at the summit and quickly set up.  We weren’t able to self-spot, so we started calling CQ. I went first and got nothing on 40 meters. I handed the paddle over to Jeff and he called CQ for a while. Nothing. He started trying other bands while I started calling on the HT. 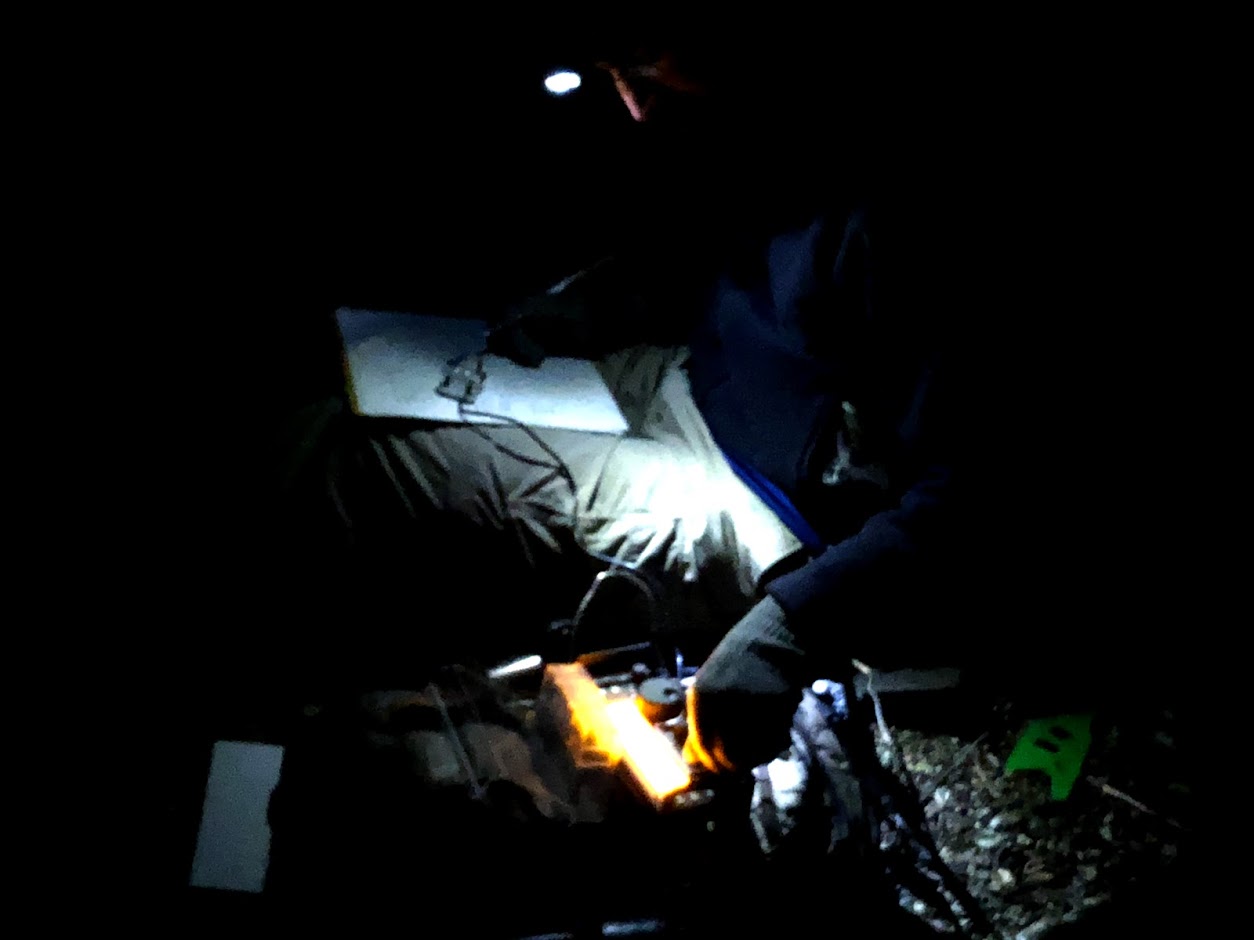 AA6XA operating in the dark

We never got anything else on HF, but heard a lot of European stations on 40 meters.  Even the KX-3 with its 10 watts wasn’t able to answer them, though.  I ended up reaching a few people on the HT, and got Jeff to contact them as well, so we both got them in our log.  With the temperature continuing to drop quickly, we packed everything up and headed back to the Pilot.

It was a long, adventurous drive on the dirt roads back to the main road, but we made it!

Thanks to all the chasers that tried! Sorry I wasn’t able to get you all on the first go.