Out of the three summits we did on this trip, this one was the easiest. Parking a short distance from the summit, it’s an easy walk up a gentle grade. There are abundant places to set up antennas and the summit area is fairly large. There’s even a little bit of cell service! After the (mis)adventures of the earlier summits (4850 and Santa Rita Peak), it was nice to have a little break.

See the Peak 4850 post for getting to the general area. Getting to this summit required we head west from Santa Rita Peak on “R11,” then took a sharp turn onto “R10.”  We followed that to a junction, with the peak obviously in sight. The road past this point is closed to vehicle access, so we parked and walked the remainder of the distance (less than a half-mile). 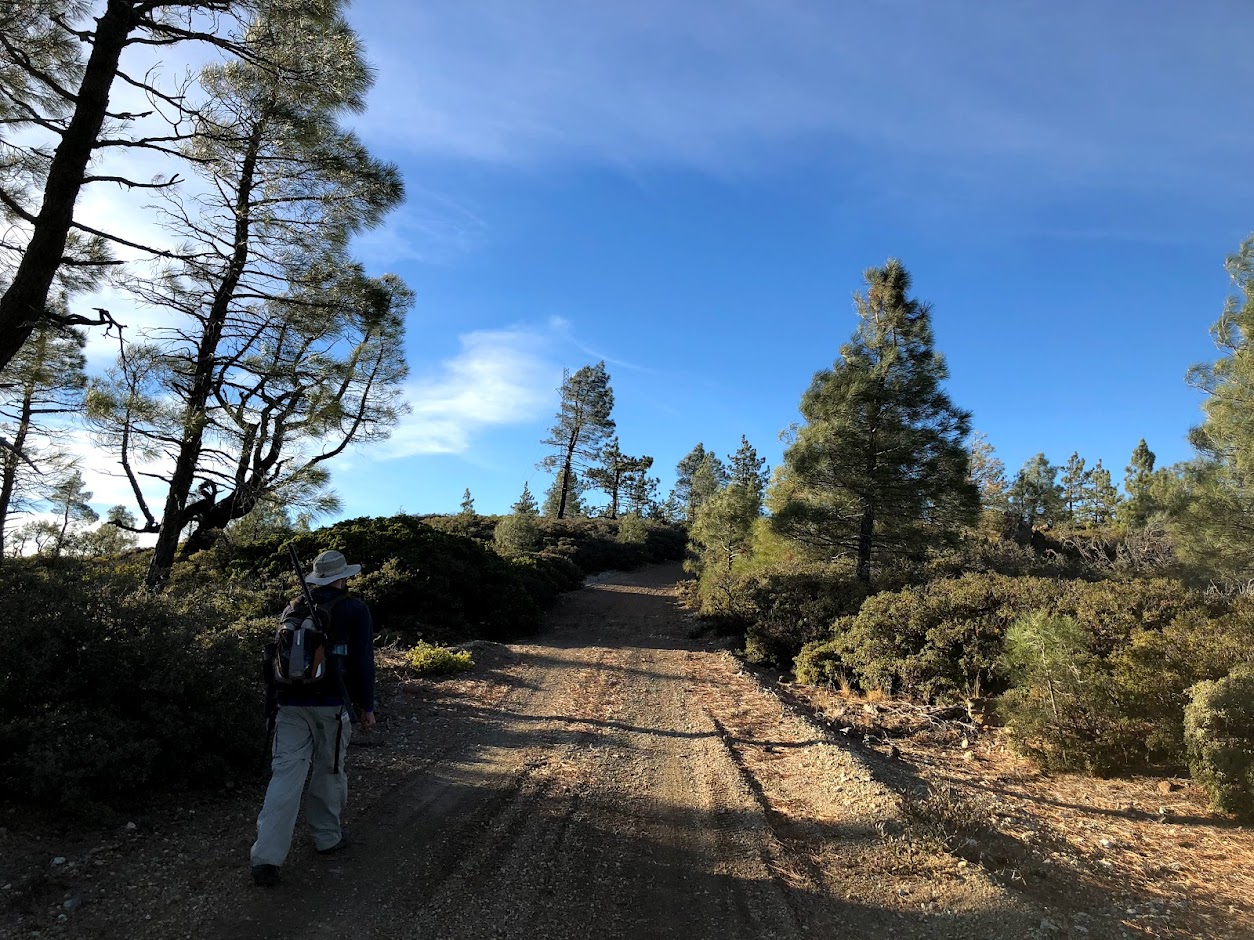 Starting the short walk to the top

Arriving at the top, there are two radio tower installations, and also a nice railing for strapping an antenna mast to.  We looked around a bit, then we went to a small rock formation which was the high point of the summit, and took turns standing on the highest point in both the Diablo Range and San Benito County.  It’s definitely not the most glamorous summit, with power lines and radio towers, but the views aren’t bad. 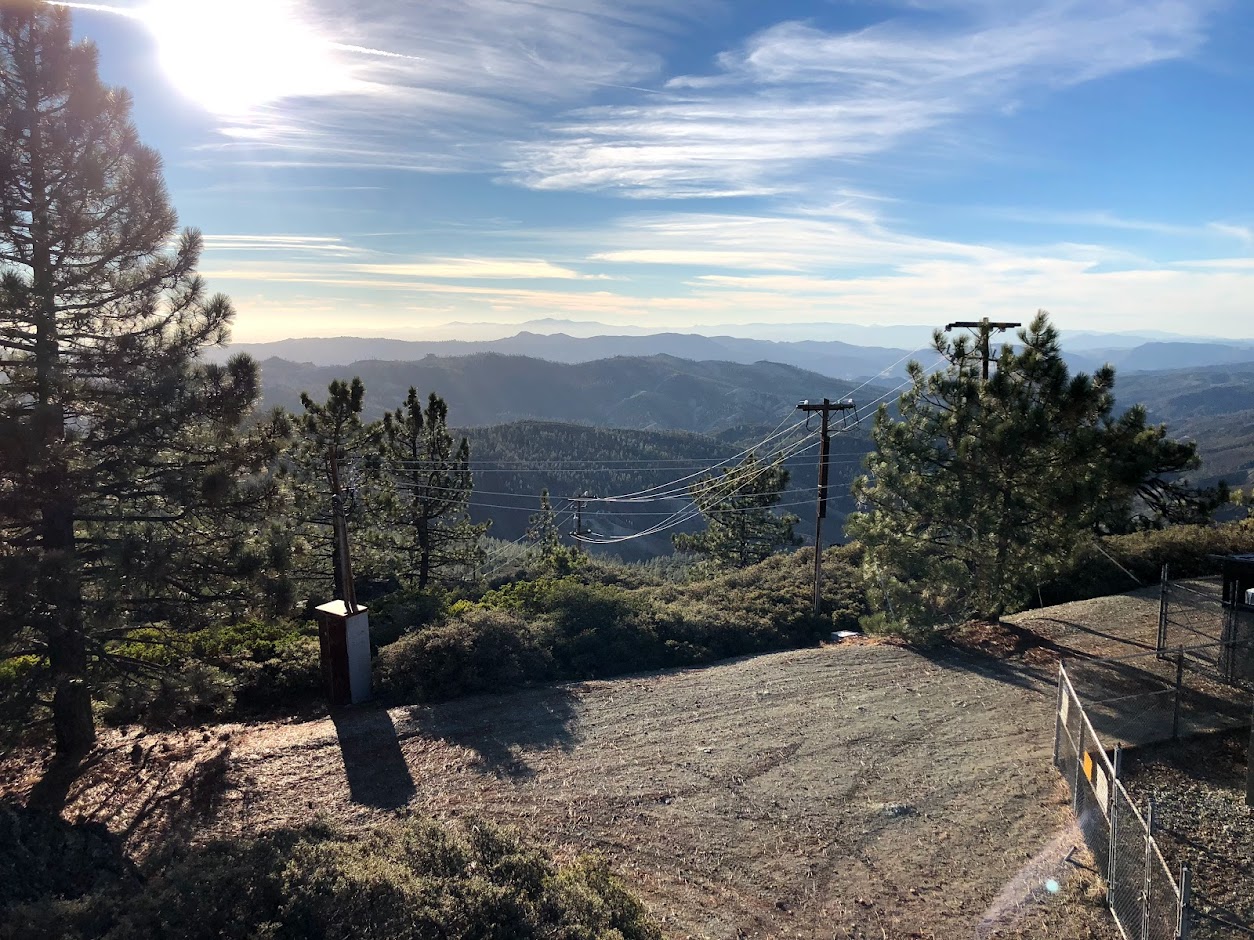 Looking WNW from the very top

Following this, we each found places to set up our antennas. Again, we made sure we weren’t too close to each other.

We agreed I’d operate 40 and 20 meters, while Jeff operated other bands.  With enough physical separation, we’d found this worked on Santa Rita Peak.

Jeff went to set his antenna up near the railing. I should have, too. But I decided to use one of the tall trees for my end-fed antenna.  I chose a tall tree with a nearby clearing.  I re-tied my rope to the antenna wire, this time with a bit more of a tail on each end.  I threw the wire over a branch.  I was trying to get it better situated, and it broke.  At first, I thought the knot had somehow come loose again, but looking at the wire, it looked like it had actually severed.  Not wanting to take the time getting the wire back up in the tree only to find out it wouldn’t tune, I decided to get out my backup antenna—my SOTABeams 40/20m linked dipole.  This took a little longer to set up, using a free-standing setup with the two sides of the antenna as two guy points, and a rope coming down from the center as the third guy line.  It wasn’t as high off the ground as I would have liked, but I plugged it in and got going.

Since I had a little bit of a cell signal, I went ahead and self-spotted on 20 meters.  It was late in the day, but I got a few contacts there anyway.  Then I moved on to 40 meters where I got several more.  I thought about operating SSB, but by the time I’d worked through my contacts on 40 meters, Jeff was done and ready to head back over to Santa Rita.  So I finished up and got everything put away.

With the exception of the antenna difficulties, not a bad activation! I’m glad I had brought along the spare antenna.

As we started our walk back down, the sun was beautifully beginning to set. 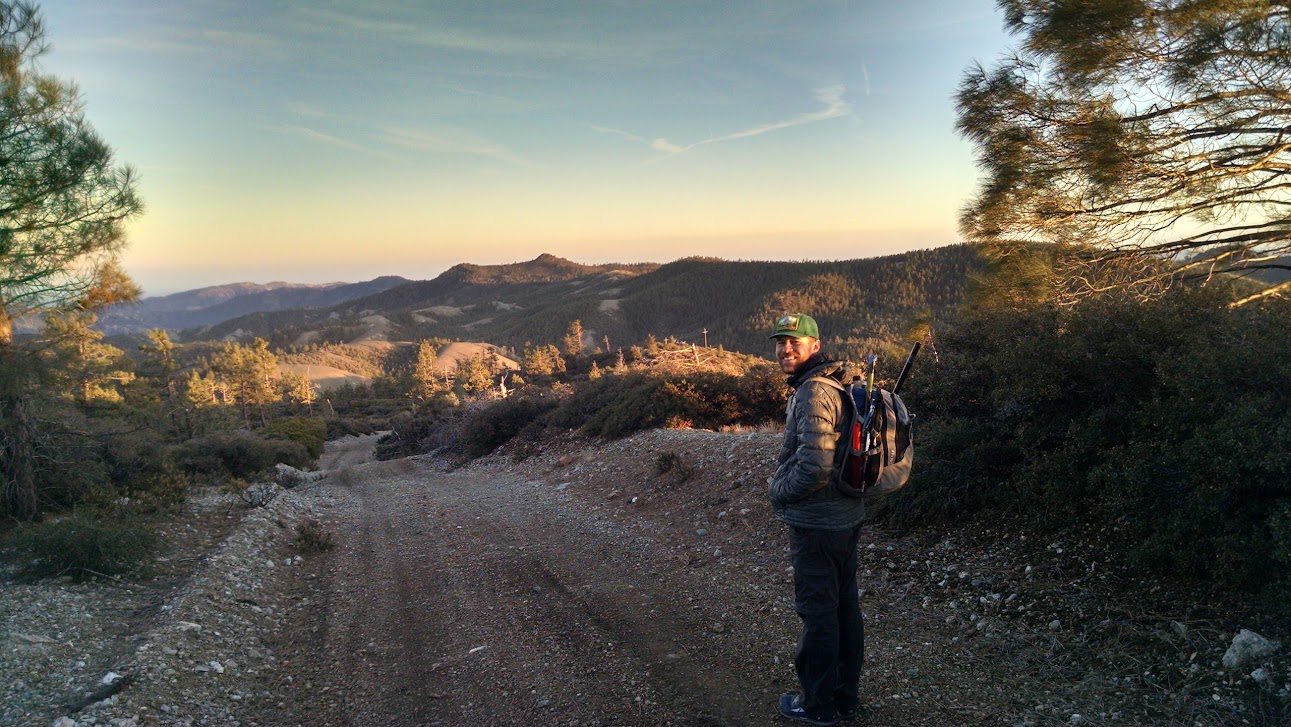