Having activated this peak once, I may not go back, unless I’m equipped with a machete or good pruning shears. This was the first of three summits in a day of activations with Jeff, AA6XA.  It’s a pretty straightforward hike followed by a nearly impassable chaparral-covered ridge.

There was a bit of preparation that led up to this. Jeff AA6XA had scoped out which summits we could likely do. We went back and forth a little bit and came up with a final plan to activate 3 or 4 summits in the area. I then researched what we’d need in terms of access. Three of the four summits planned are in the “Clear Creek Management Area.” This is a BLM (Bureau of Land Management) area, which generally means it’s pretty permissive in terms of access. Not this one. It had been closed years earlier, due to supposed asbestos risk. This was immensely controversial with the OHV crowd that used the area as a giant off-road playground.  Eventually, it was reopened, but with restricted access. Most of the dirt roads are closed to vehicle access, with certain ones marked for travel.  A $5 permit is required for vehicle access to the CCMA (Clear Creek Management Area). This can be paid at the entrance (self-service) to avoid the $10 additional online fee.

With the CCMA is the Serpentine ACEC (Area of Critical Environmental Concern). This requires a separate permit per person and is limited to 5 visits per year. I believe this area is the area deemed to have the most asbestos risk, but I had a devil of a time determining online just what areas this covered. I ended up calling the regional BLM office to ask.  I told them what summits we were planning on visiting and was told that they’re in the ACEC.  This permit is “free” but requires online purchase, which carries a $10 processing fee per person.  Each person has to actually go reserve their own permit online, individually. Jeff and I both did this. Then, about 4-5 days before our visit, I called and got the combination for the locked gate so we could enter this area.

Jeff and I left my house before dawn, with a drive of over 2 hours to get to the entrance, and another 1-2 hours driving the dirt roads to our first summit. This is a very remote area.

The roads were pretty smooth at the beginning but quickly turned into something I wouldn’t do in a car.  I was really glad we’d brought my Honda Pilot with its all-wheel drive.  After about 90 minutes of dirt roads, we arrived at the turnoff for our first summit of the day, Peak 4850.  We had hoped we could drive the jeep trail to the summit ridge and hike the rest of the way. Upon arriving at the turnoff for the jeep trail, there was a sign posted saying it was closed to vehicles. Not only that, it was too narrow for my vehicle.  We parked at the wide spot in the road where the turnoff was and started our hike. 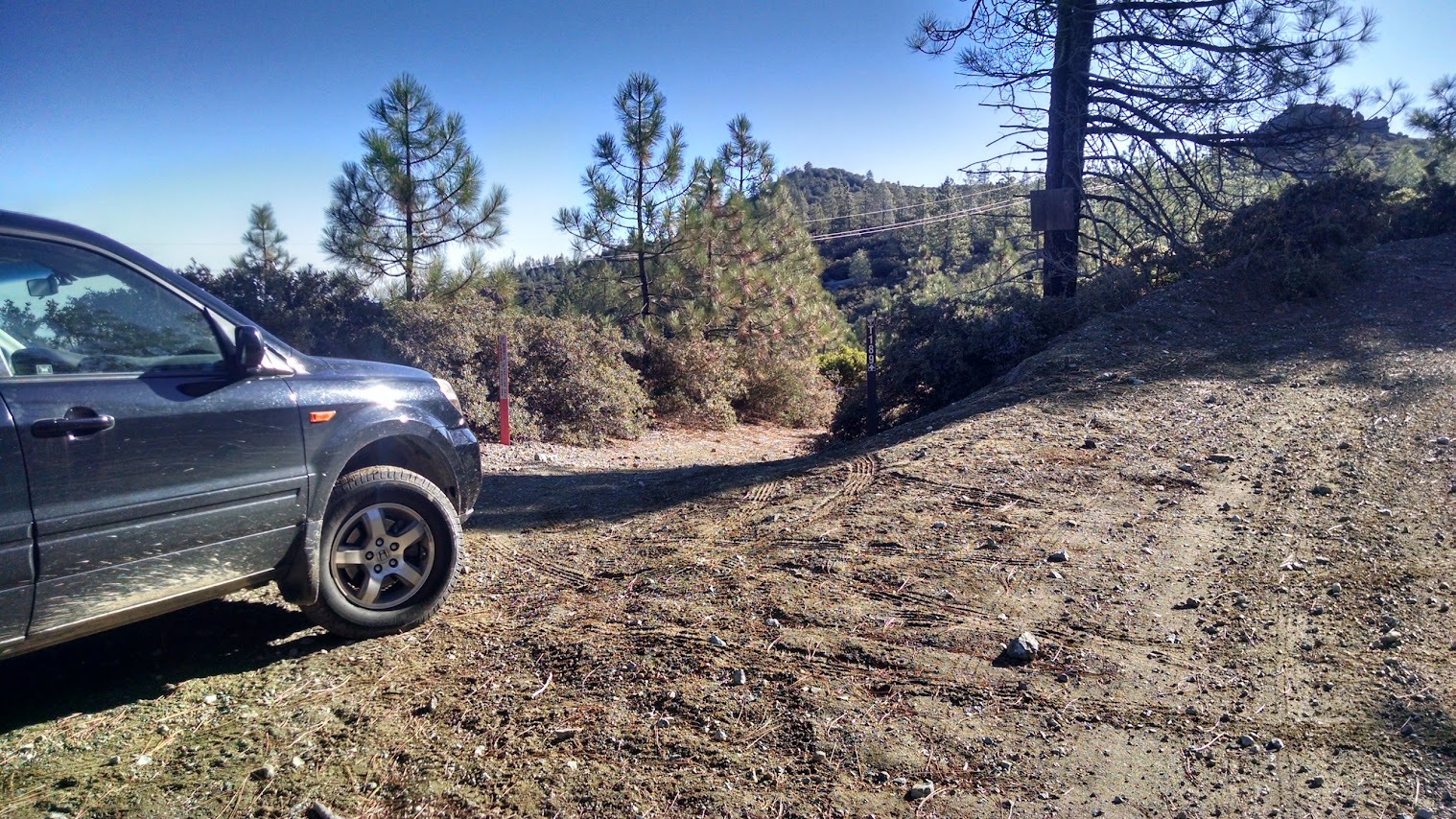 Every family SUV should get this dirty, once in a while

The hike starts out going downhill. Then, it starts going up and down over various small features, before starting to climb back up again in earnest.  Both directions of this hike involve elevation gain.  The middle half of the hike skirts the San Benito / Fresno county line, actually crossing it three times in each direction. 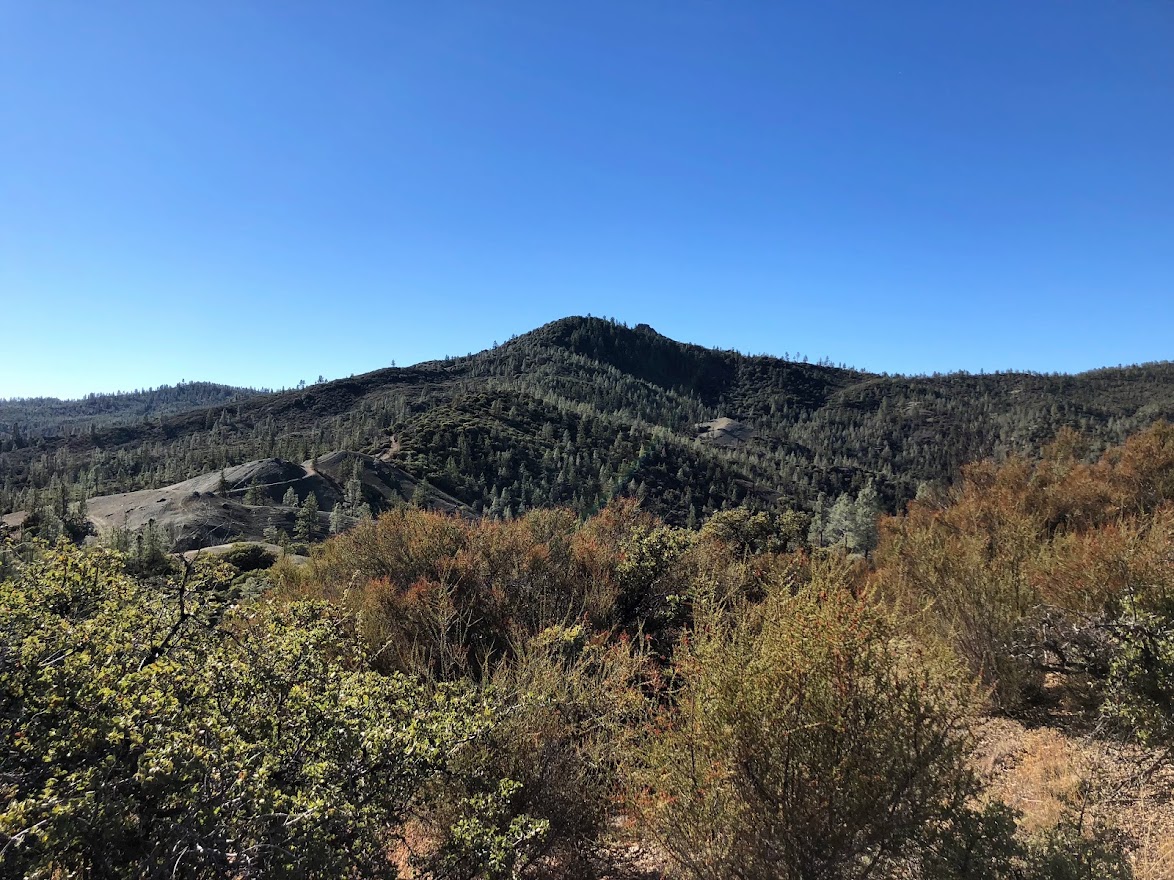 Looking back toward Santa Rita Peak, the second summit of the day

After about 2.25 miles, we arrived at the turn in the jeep road indicating the spot where we’d head west toward the summit.  This started out innocently enough as a fairly open cross-country hike. 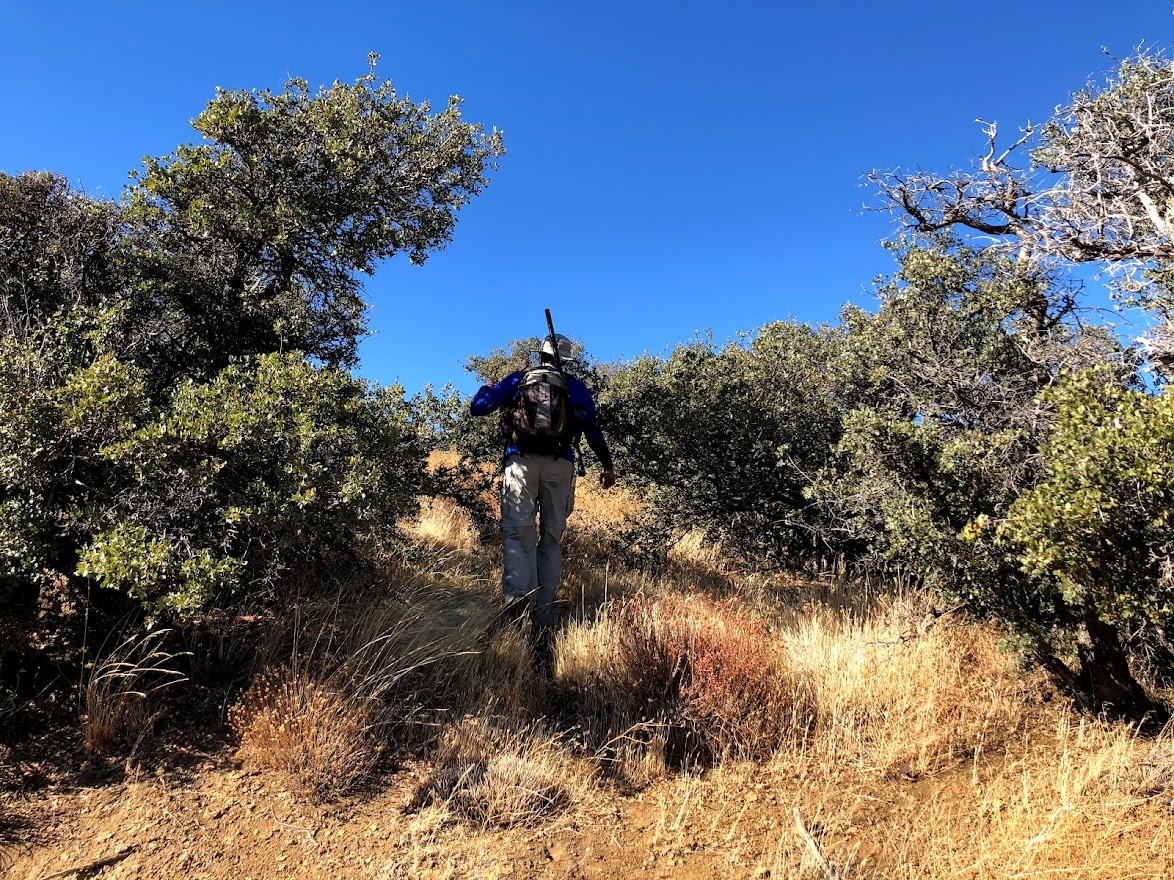 Jeff AA6XA starting up the ridge

Within minutes, we were pushing our way through brush, trying to find clearings where we could. One of the clearings even had remnants of a camp, with old cans embedded in the dirt. On our way back, we determined one of them to be a Pepsi can from the early 60’s.  Moving on, the brush got thicker and thicker as we proceeded, to the point where it was taking minutes to move just 10 yards forward.  What had looked like a possible path on Google’s satellite view had indeed changed over the years and was thoroughly overgrown. 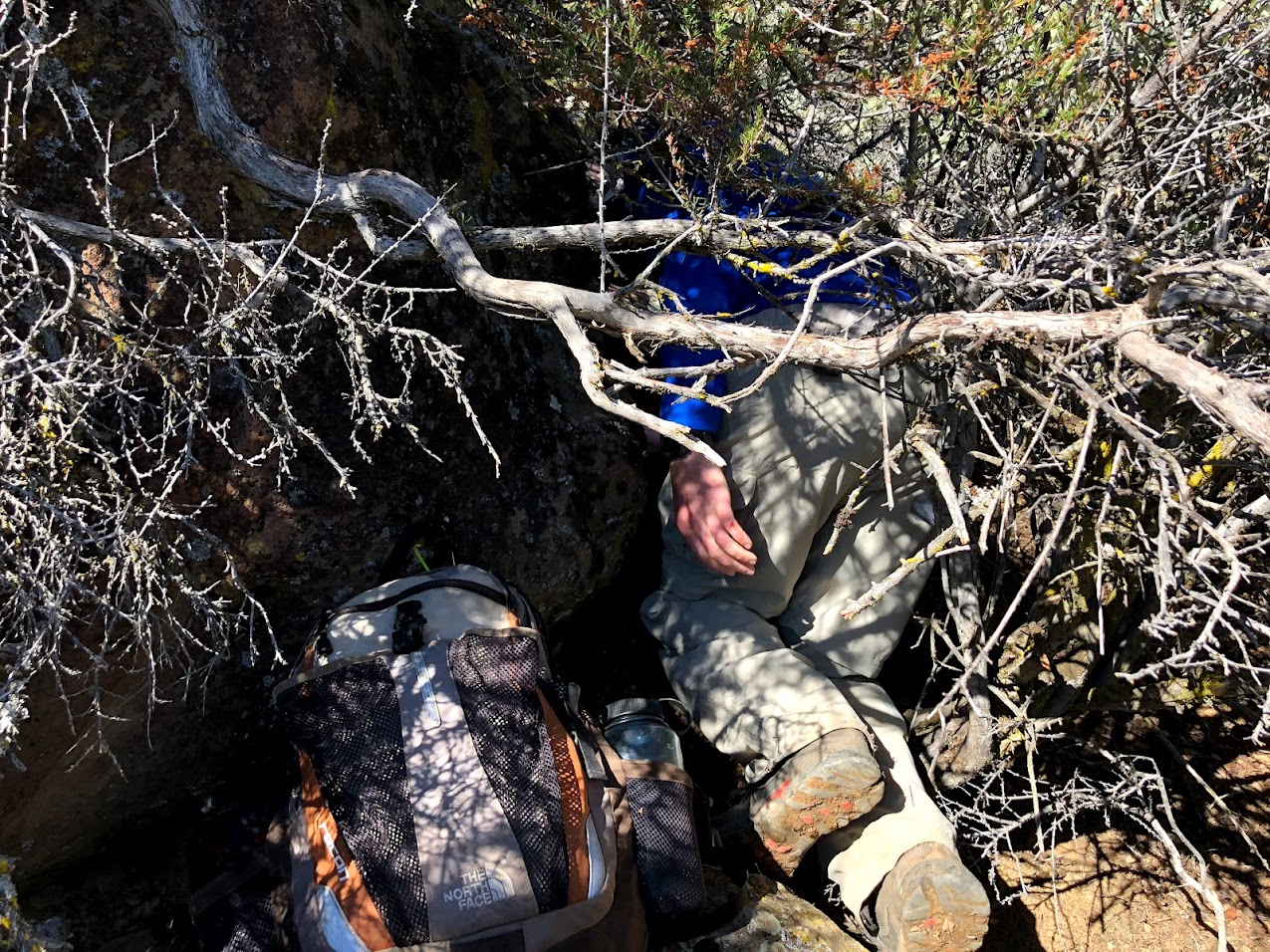 After around 45 minutes of bushwhacking, we found ourselves up on some rocks. A sub-peak of 4850. We checked the altimeter and map and determined we were now within the activation zone, so rather than pointlessly bushwhack for another hour, we called it good and started setting up our antennas.

I got my end-fed set up while Jeff set up his doublet. There wasn’t a lot of room on this peak, and we somewhat inadvertently had our antennas pretty close to each other.

We quickly found out that our antenna positioning was a problem! Even on different bands, my MTR-3B and Jeff’s KX-3 were interfering with each other. Since Jeff had more band-agility, I stayed on 30 meters, and he found a band with the least interference, which turned out to be 40 meters.  We probably should have adjusted our antennas, but we just decided to roll with it.  We both started calling CQ right away.

Jeff had four contacts in the log before I got my first reply. Right after he told me he’d gotten his four contacts, I started getting answers.  First was Ken K6HPX.  Being new to CW, I was a bit nervous about having to send my summit designator (since we were doing multiple summits), or even being able to tell if the caller was asking me for the summit reference. But I did manage to somewhat copy Ken was asking for it, and proceeded to send it. He was kind enough to correct the spot on SOTAWatch.org so it would have the correct reference. Thanks, Ken!

With that in order, we wrapped up our QSO and the calls kept coming in. By the time I’d worked through the pileup, I had 12 in the log. There was one really weak station I couldn’t quite copy.  I took a little break to eat, while Jeff worked some other bands.  I considered also working some other bands, but then decided against it. Knowing we’d be spending some time bushwhacking to get back to the trail, we decided to pack it up after a little while.

With our equipment packed up, we headed back down through the thick brush. 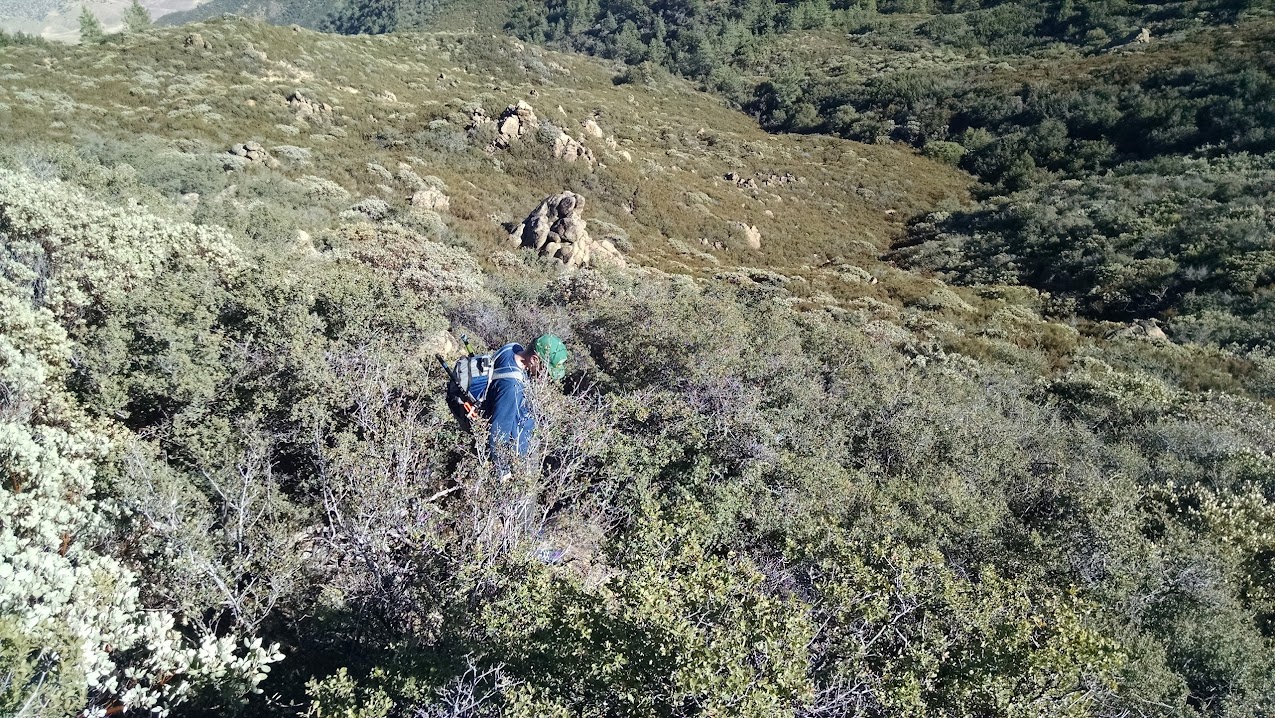 Working our way back down

The bushwhack back down was a lot easier. Downhill!

Getting back to the trail, we had a pleasant hike back to the vehicle.  I could occasionally hear a dirt bike or some similar vehicle off in the distance.  I didn’t know it at the time, but it would mean something for the next planned summit of the day. On to Santa Rita Peak!