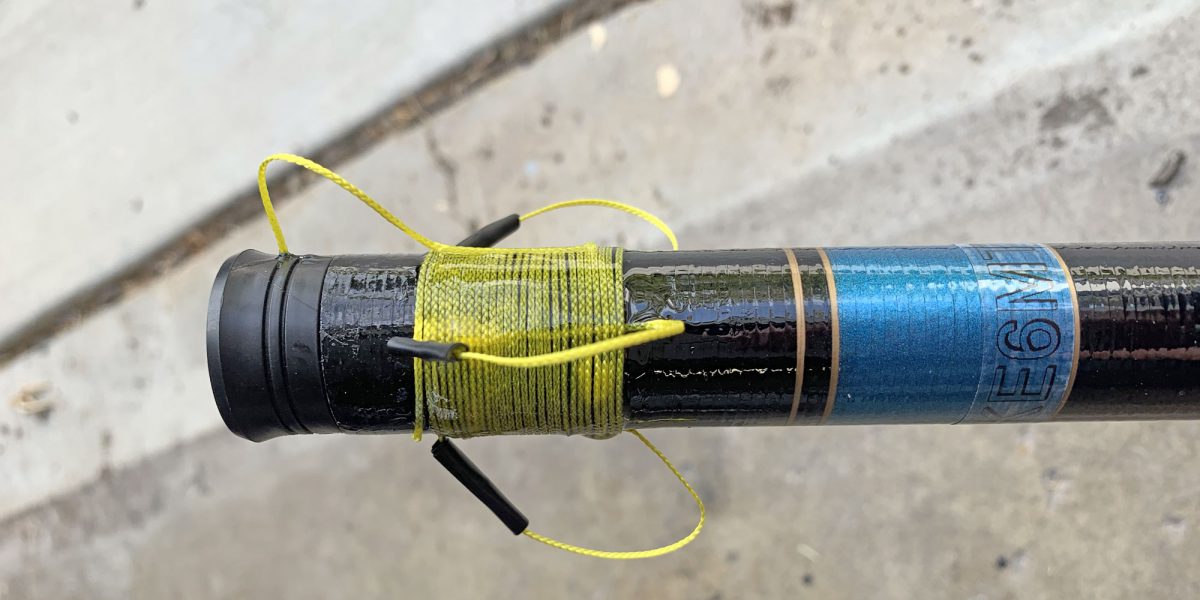 How do you quickly, easily, and inexpensively get your antenna wire up in the air? This is one of the first things I wanted to solve when I first set out to do portable operations.

How do you quickly, easily, and inexpensively get your antenna wire up in the air? This is one of the first things I wanted to solve when I first set out to do portable operations.

There were several options that were easy to find, but didn’t quite fully fit what I had in mind — most notably from SOTABeams. They have some great masts, but the weight and cost weren’t quite in the range I had in mind.

At some point I stumbled across Peter VK3YE’s videos on YouTube. He has at least one video on using inexpensive telescoping fishing poles as masts. Then I found out that it’s something a lot of people have done. After a good deal of searching, I found what I wanted on eBay. I think I’ve mentioned before, I usually search for “7.2m FRP Pole” on eBay and come up with several options, such as this one.

Here’s a good thing to know: the “7.2m” isn’t the actual length of the pole when fully extended. It’s most likely the length of all the individual pieces combined, if they weren’t fit into each other. This pole has become my standard mast for all of my SOTA activations, if I’m not throwing the antenna wire over a tree or some other arrangement. I’ve even lost or destroyed at least 2 or 3 of these, and it’s not that big of a deal since their price ranges from $9-12 USD. If you’re more into making your purchases on Amazon, they cost more but they are available.

More recently, thanks to a tip from Amy AG7GP, I found a “9m” version of the pole on eBay. The collapsed length is the same, but it’s a bigger diameter, in order to accommodate more sections for the overall additional width. With the top section removed, it’s about 21 feet or 6.4 meters when deployed.

The longer mast is great, but the additional height really isn’t necessary, so I’ll probably bring the pole when I’m doing shorter SOTA operations. The primary pole I’ll keep using is the “7.2m” pole. The deployed length of this one, by the way, is about 16.5 feet or 5 meters.

Over time I’ve played around with different ways I can use the pole, resulting in a few improvements. A few of these things:

Up until recently, I’d either jammed the bare pole into some rocks, or guyed it with my “ice cream lid” guying ring. Then I got some really great ideas from Adam K6ARK. I’ll be writing more about his great ideas, since he’s a genius with making things for portable operations. Namely, an upcoming post on my tri-band EFHW (end-fed half-wave) trapped antenna, built on Adam’s and Fred KT5X’s (see Fred’s UltraLyte SOTA presentation) ideas.

These are the three improvements I got from Adam K6ARK. They may seem like simple things, but they make a world of difference in the use and durability of these masts:

Here are some pictures of these most recent improvements:

The process for adding the guying cordage is pretty simple:

I’ve set this pole up a number of times, both with and without the guying setup. It’s a great setup! I can’t recommend these poles enough, and with these improvements they become an exceedingly excellent choice for SOTA and other portable operations.

After sending this post out, Fred KT5X got in touch with me with the following notes. He’s got a lot of great ideas to share. Part of the challenge of ham radio is getting all of these great ideas into one place. Here you go: