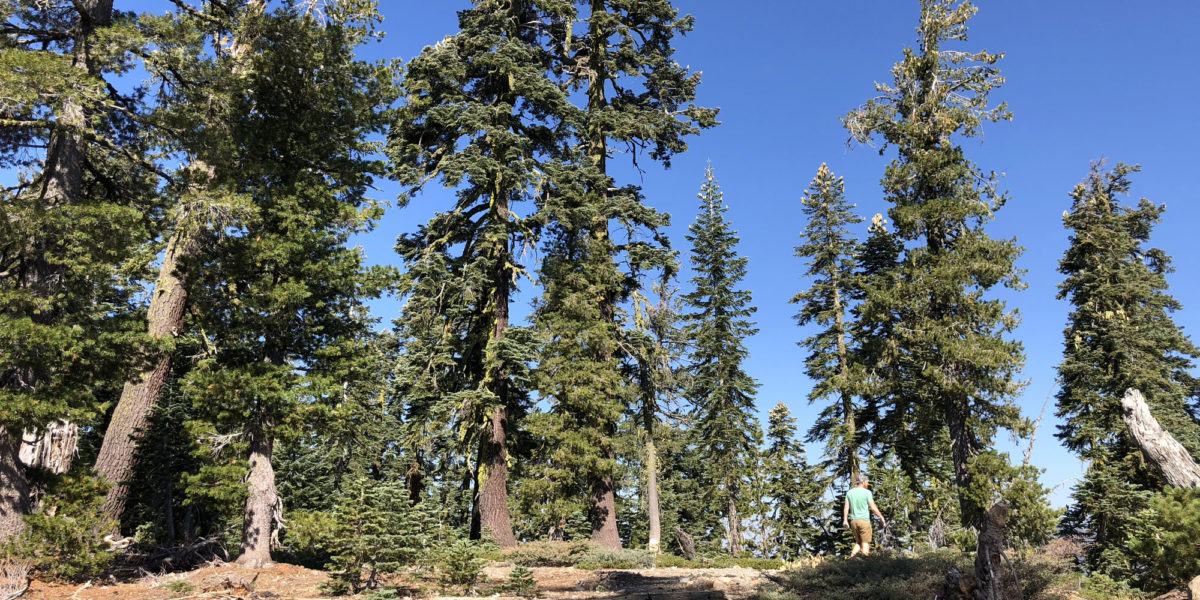 I usually try to squeeze in a little SOTA action on most of my trips, even if they’re not SOTA-related.  On this group trip I was looking at a few nearby summits for a little side-trip.  I ended up setting my sights on this one—a previously un-activated drive-up summit with a very short hike.  But the road to it is a rough one!

I usually try to squeeze in a little SOTA action on most of my trips, even if they’re not SOTA-related.  I have an annual group camping trip my family and several other families go on.  This year, it was at an area called “French Meadows” tucked away in the wilderness east of Lake Tahoe. I looked at a few different summits. Originally, I was planning on getting a more difficult one, but the more I looked at it, the more it looked like an all-day excursion—not very good when I’m supposed to be with my friends and family.  I ended up setting my sights on this one—a previous un-activated drive-up summit with a very short hike.  But the road to it is a rough one!

There are probably at least 2-3 ways to get to this summit, but since we were camping in the French Meadows reservoir, there was one main option—take French Meadows Road to FS 96.  Near the beginning of the drive, a little while after crossing over the Middle Fork American River, the pavement ends.  But the dirt road that continues is nice and smooth.  Things don’t get rough until turning onto FS 96.  At the beginning of this dirt road, there’s a sign that indicates no cars or trailers.  They mean it.  The road is a little bit rough for the first couple of miles, then it gets a little more rough. No problem at all for a serious off-road vehicle, but I had to take it slow in the Honda Pilot.  Still, after about 4-4.5 miles on that dirt road, we arrived at the top of the ridge.  I’d considered continuing on to Mosquito Ridge Road and taking that up to a road that appeared to directly cross the summit, but I was more in the mood for a short hike rather than driving all the way.

It’s not hard to find the start of this one.  After checking out the views from the rock outcropping near where we parked, we got on with the hike to the top.  Just look for the sign that says “Tevis.” 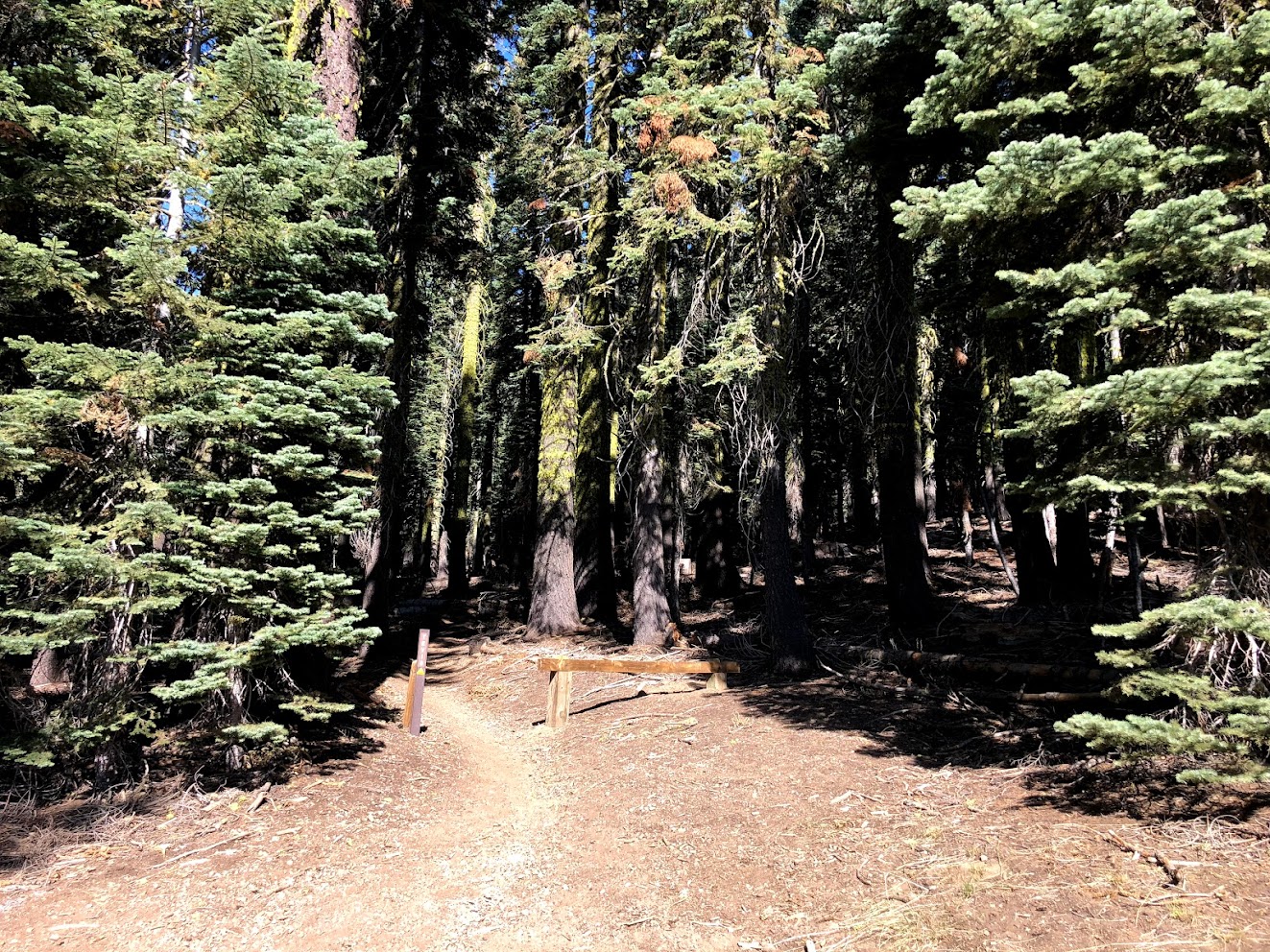 Start of the trail

I had three of my friends with me—it’s fun having people with you once in a while!  We took a couple of the switchbacks up the hill, zig-zagging upward towards the summit. 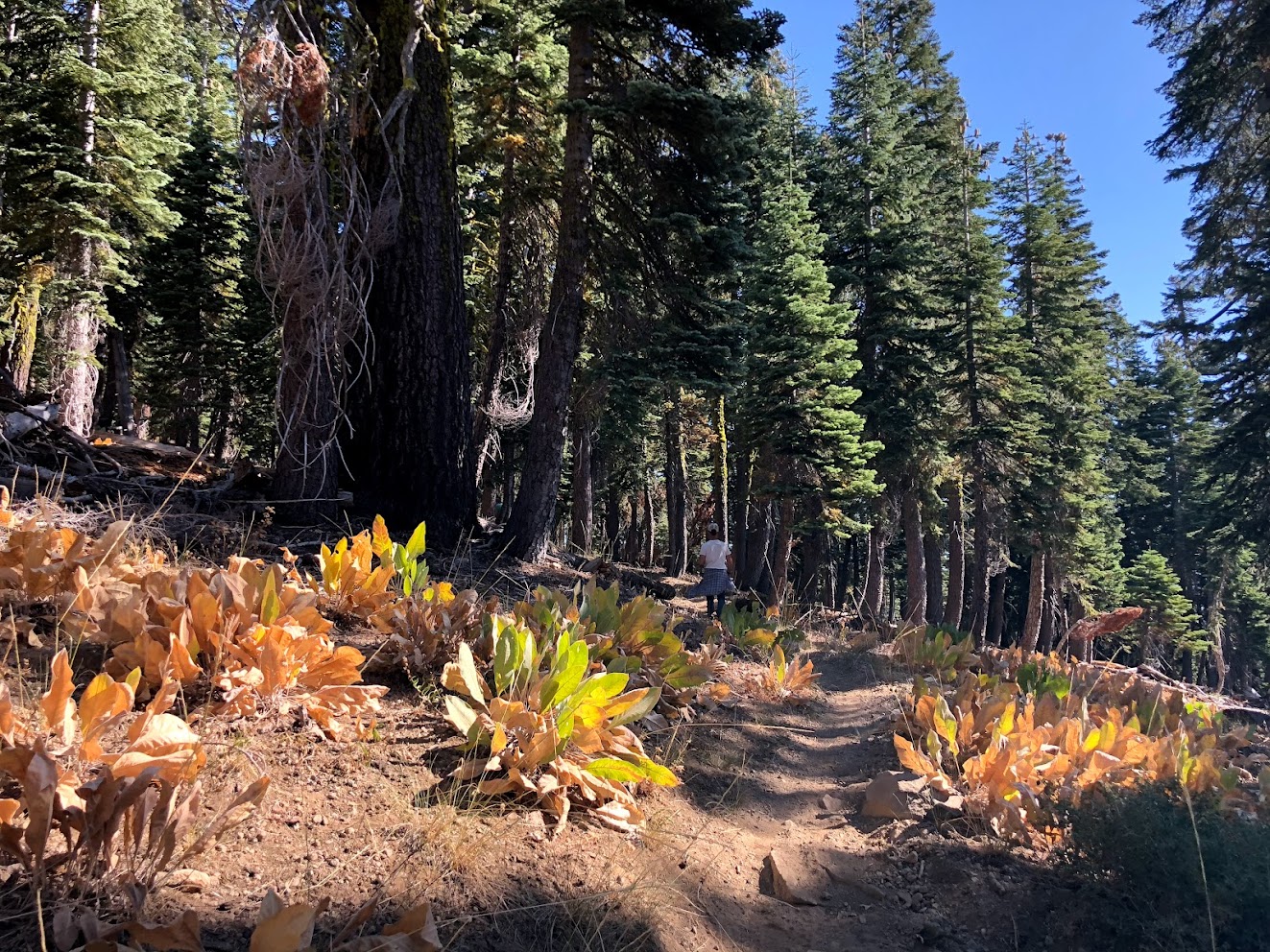 Going up one of the switchbacks toward Red Star Ridge

At a certain point, we were so near the summit, it seemed silly to keep following the trail, so we cut left through the woods, heading straight for the summit.  After about 50-60 yards, we crossed the road that traverses near the summit, and kept going, looking for the highest point. 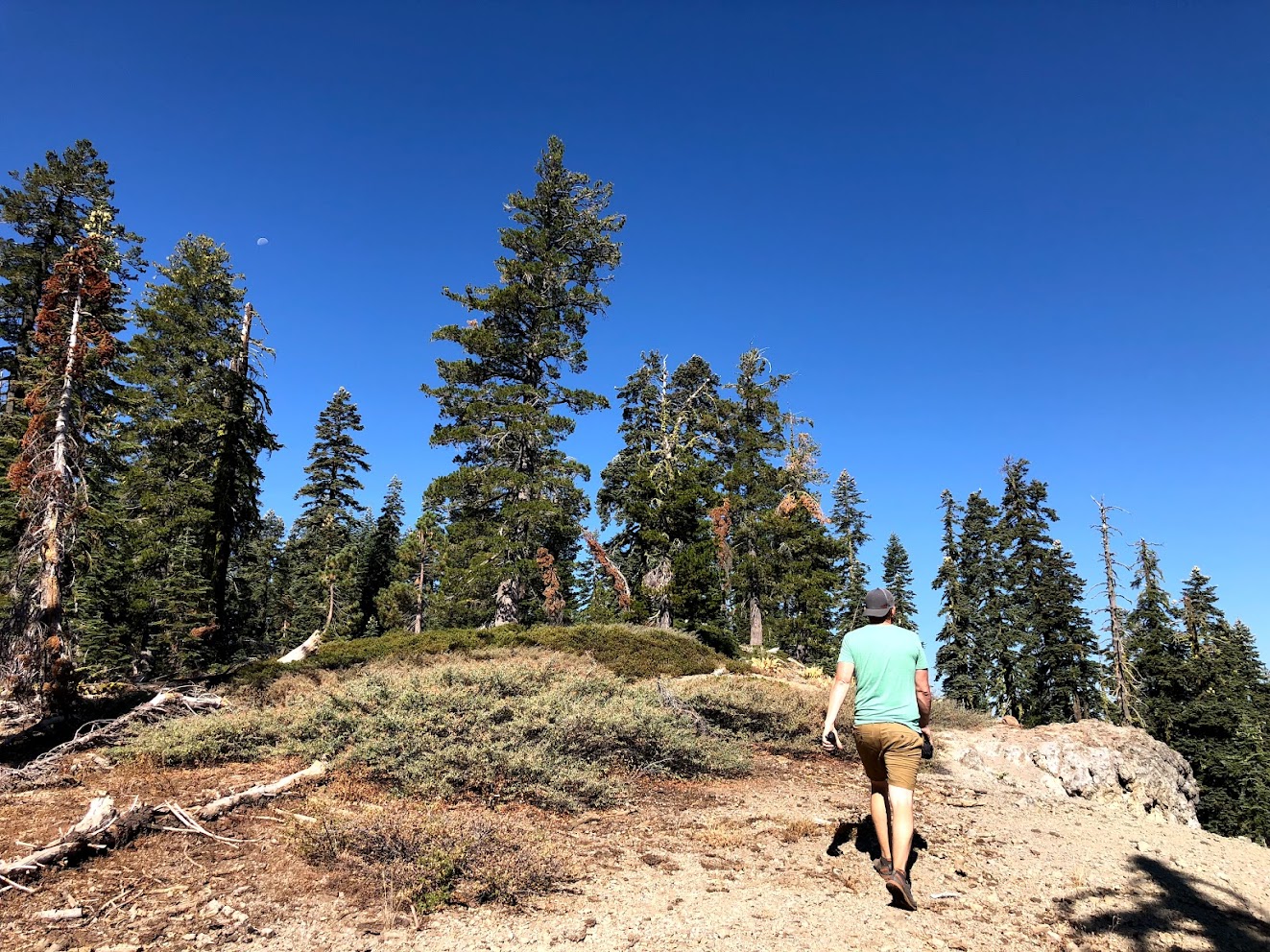 Within another minute or two, we were at the highest point, consisting of a fairly flat area with lots of trees and a steep drop-off on the east side.  Perfect for SOTA! 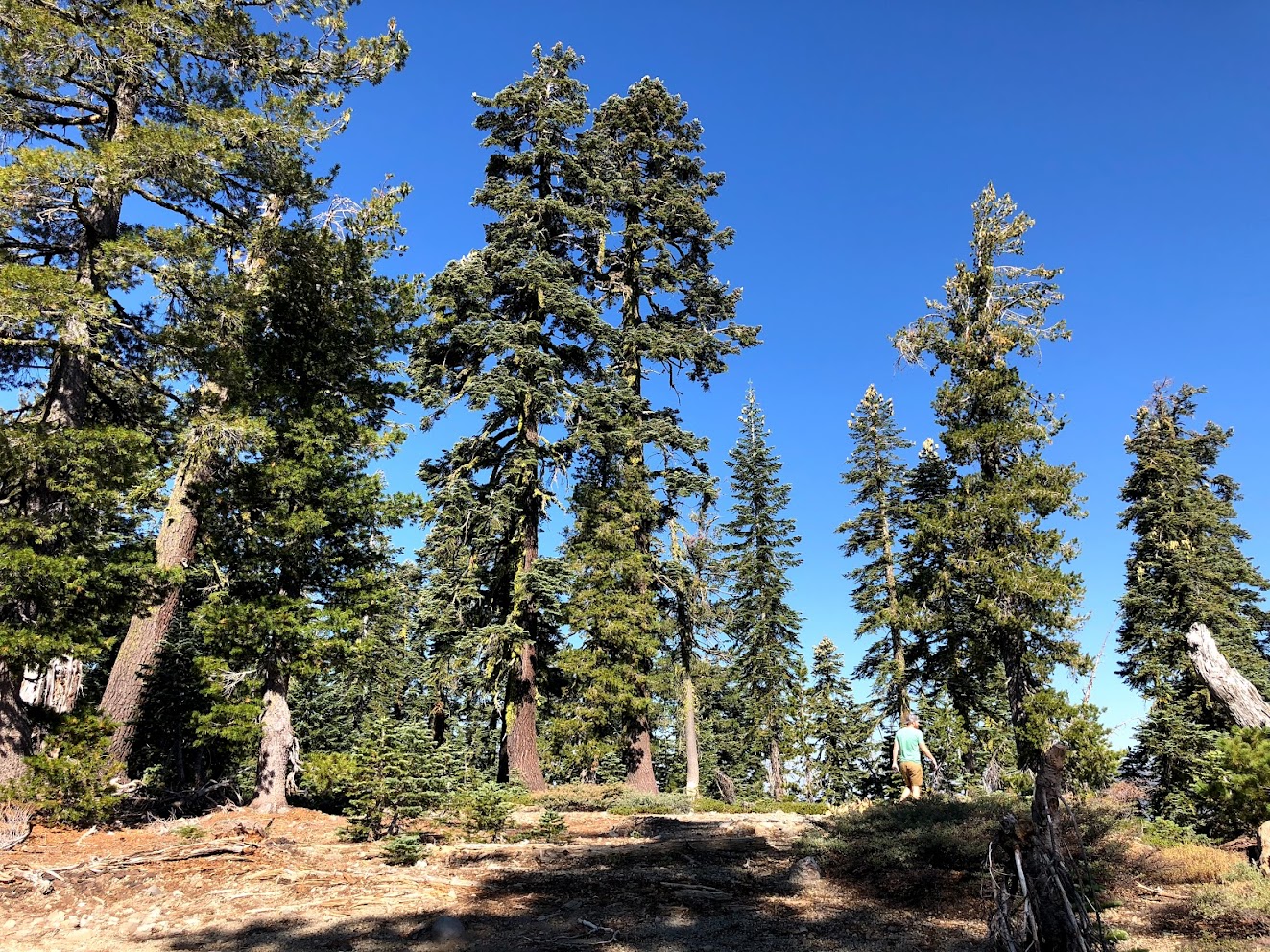 Just below the top

While I got busy throwing my antenna over a high tree branch, one of my friends got his drone out and prepared to get some great aerial shots.  I got the end-fed antenna thrown over a good branch on the first throw!  I hooked everything up, including the little speaker I have for the MTR, so that my friends could hear what was going on (even if they couldn’t understand it).  I got busy making contacts! 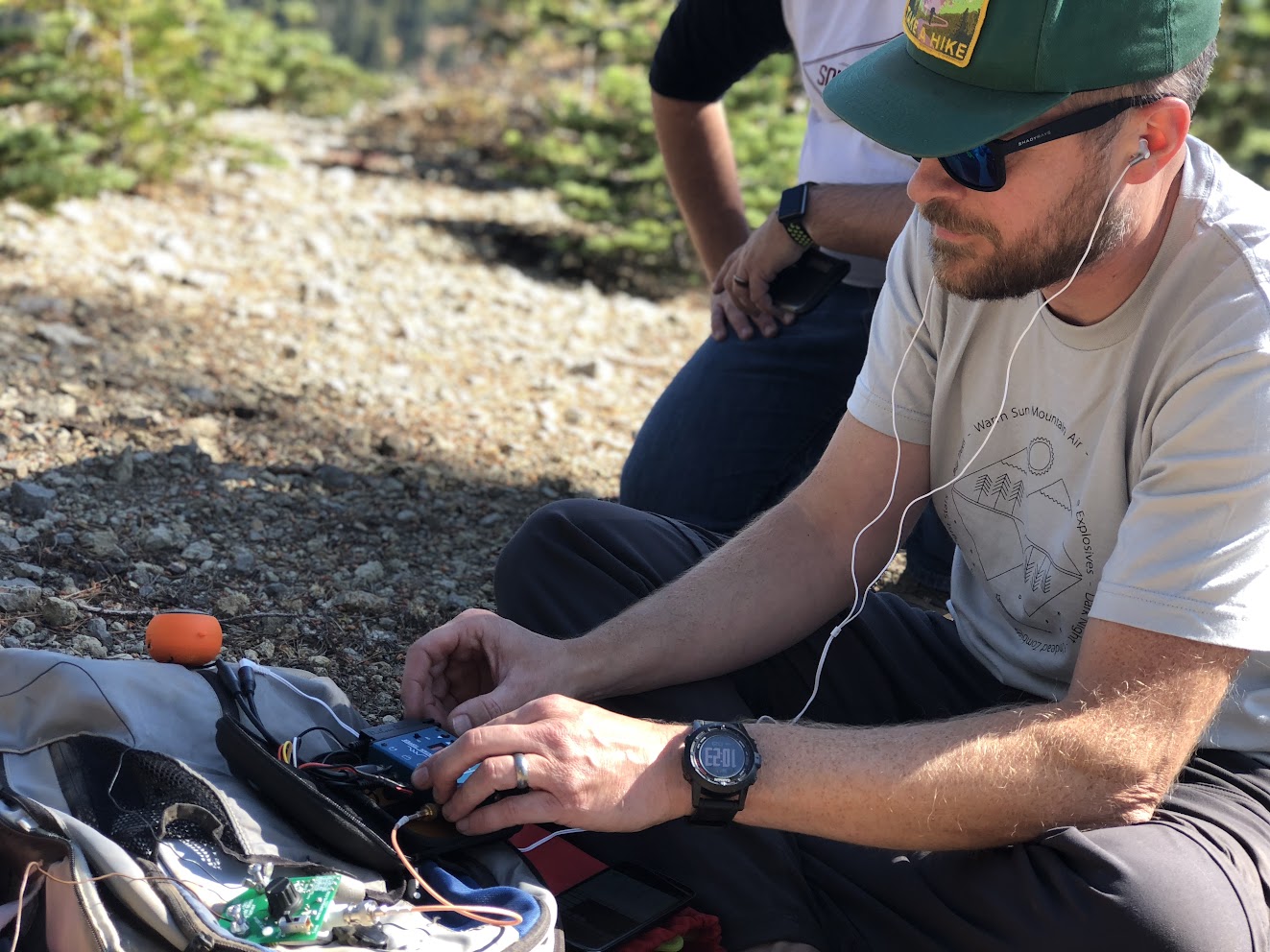 Right off the bat, I got an S2S (summit-to-summit) with George KX0R.  He found me and answered my call.  I then got a coupe more regular chasers on 40 meters before it went quiet.  I then switched to 20 meters.  There was lots of action here. I got several regulars and a couple I didn’t quite recognize.  Following that, since I had service, I noticed Jeff AA6XA was on 30 meters on a summit not too far away.  I don’t think we quite had line-of-sight, but I figured I’d try anyway.  We managed to make the contact, but just barely!

I had my sound-isolating headphones on and apparently, my friends asked me questions once or twice and I didn’t hear them. In fact, there were a few close-by drone shots and I was still able to hear the audio from the radio and keep making contacts! Some of the drone shots had blurry focus, but here’s one that made it. If you go full-screen you might be able to see my antenna wire: