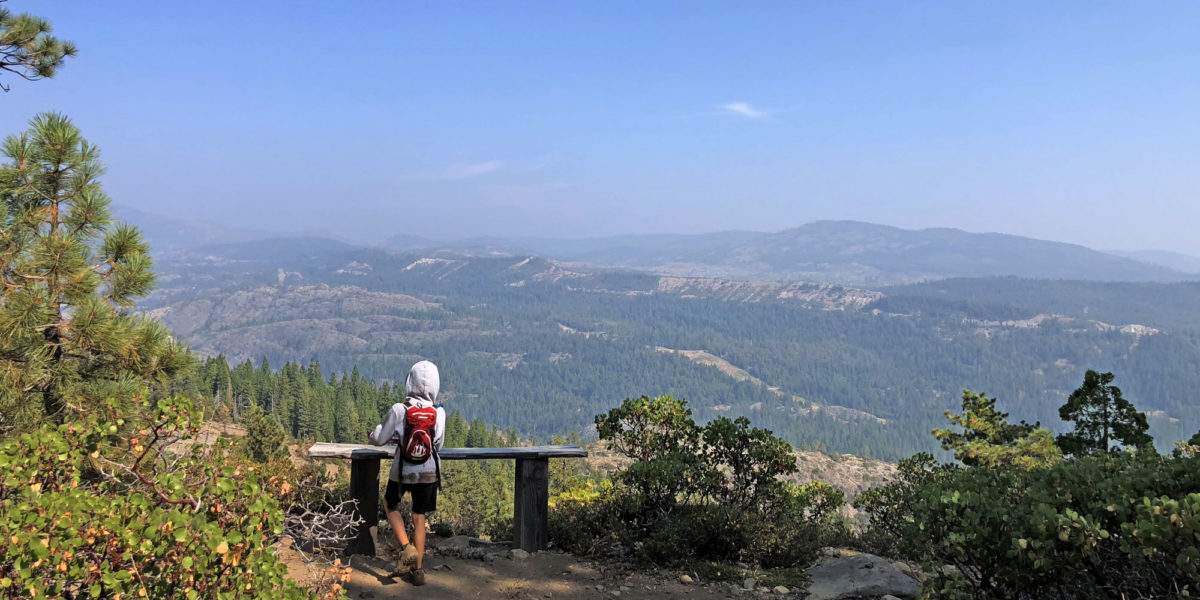 This was the second (and final) summit of the day with my boys and the dogs, after Grouse Ridge.  I had an optional third one planned, but things always take longer when kids and dogs are involved!  This summit is another easy one, with most of the difficulty being the drive to get there.

This was the second (and final) summit of the day with my boys and the dogs, after Grouse Ridge.  I had an optional third one planned, but things always take longer when kids and dogs are involved!  This summit is another easy one, with most of the difficulty being the drive there. It’s something that could theoretically be done in a sedan (as Jeff AA6XA can attest), but I’d definitely feel more comfortable getting here in a higher clearance vehicle, ideally with AWD.  That’s what I did for this trip.

From CA 20 Turn onto Last Chance Mine Road, FS 20-16. I don’t think it’s signed, but about 1.5mi up the road, another road (20-16-2) splits off to the right. After about another half mile, this takes you straight up to a junction where there’s enough room to park.  The first half of this drive is on pretty rough road, but it smooths out toward the end.  There were a couple of sandy sections with deep tire grooves on either side.  At one point, the Pilot even got low enough in the grooves to scrape the sand a bit.  So that part would be sketchiest for cars, but probably still doable if you stay out of the grooves. 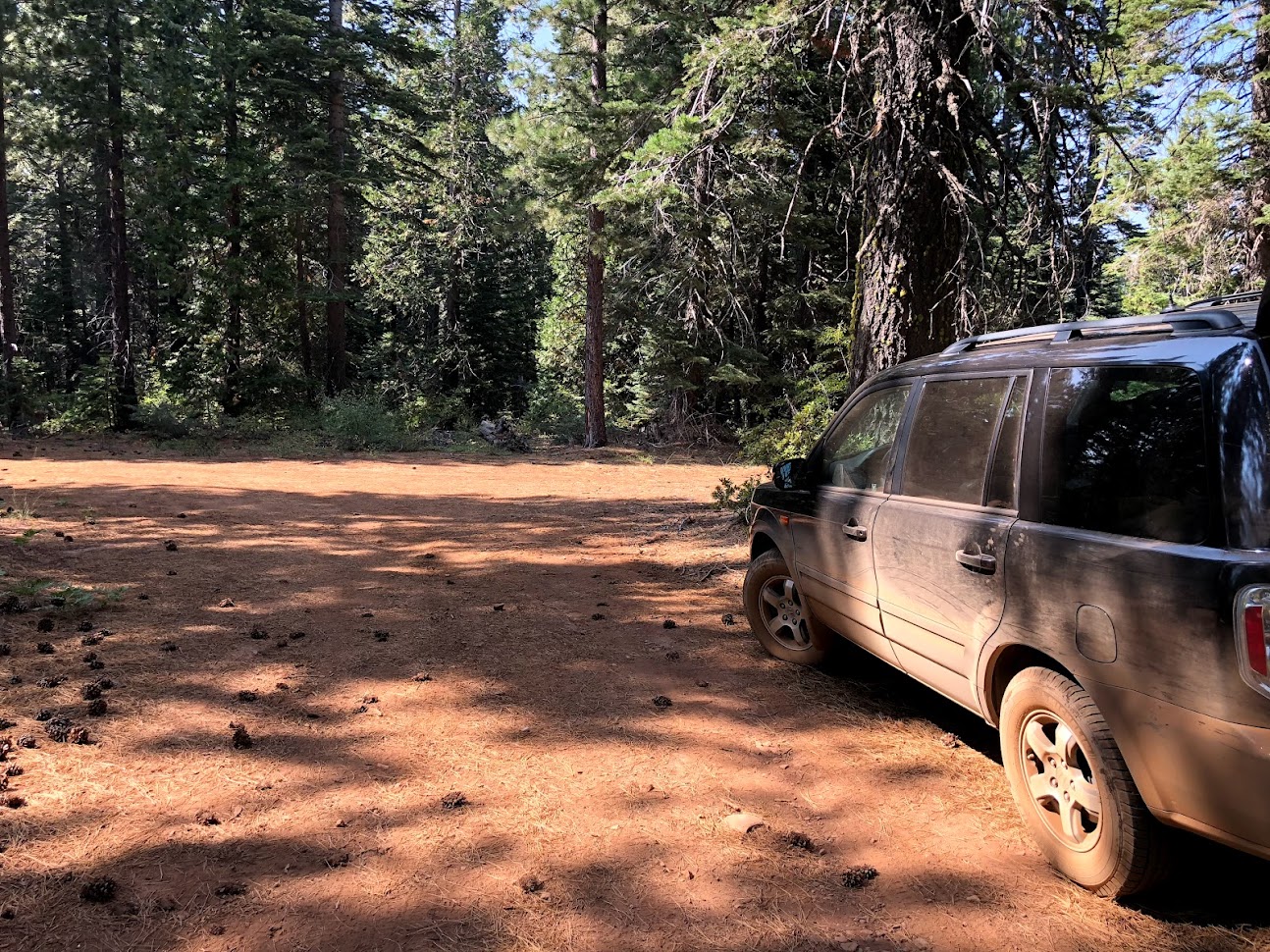 The trusty (and dirty!) Pilot parked safely off to the side

Heading south from the parking spot on the road, we started looking for an old, overgrown logging road I’d spotted when driving past the junction a bit. 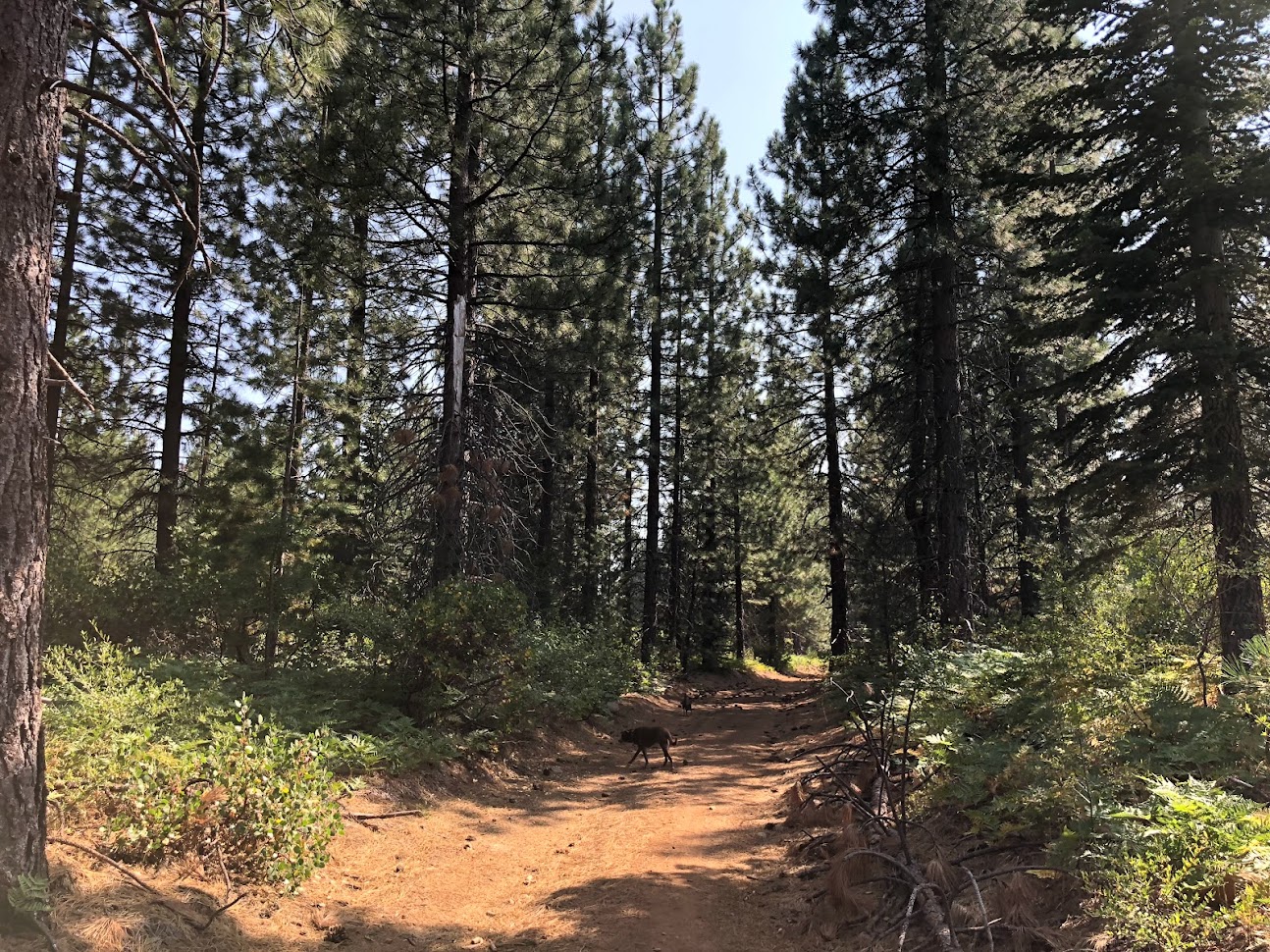 Heading south on the road

In a minute or two, we were at the old logging road. 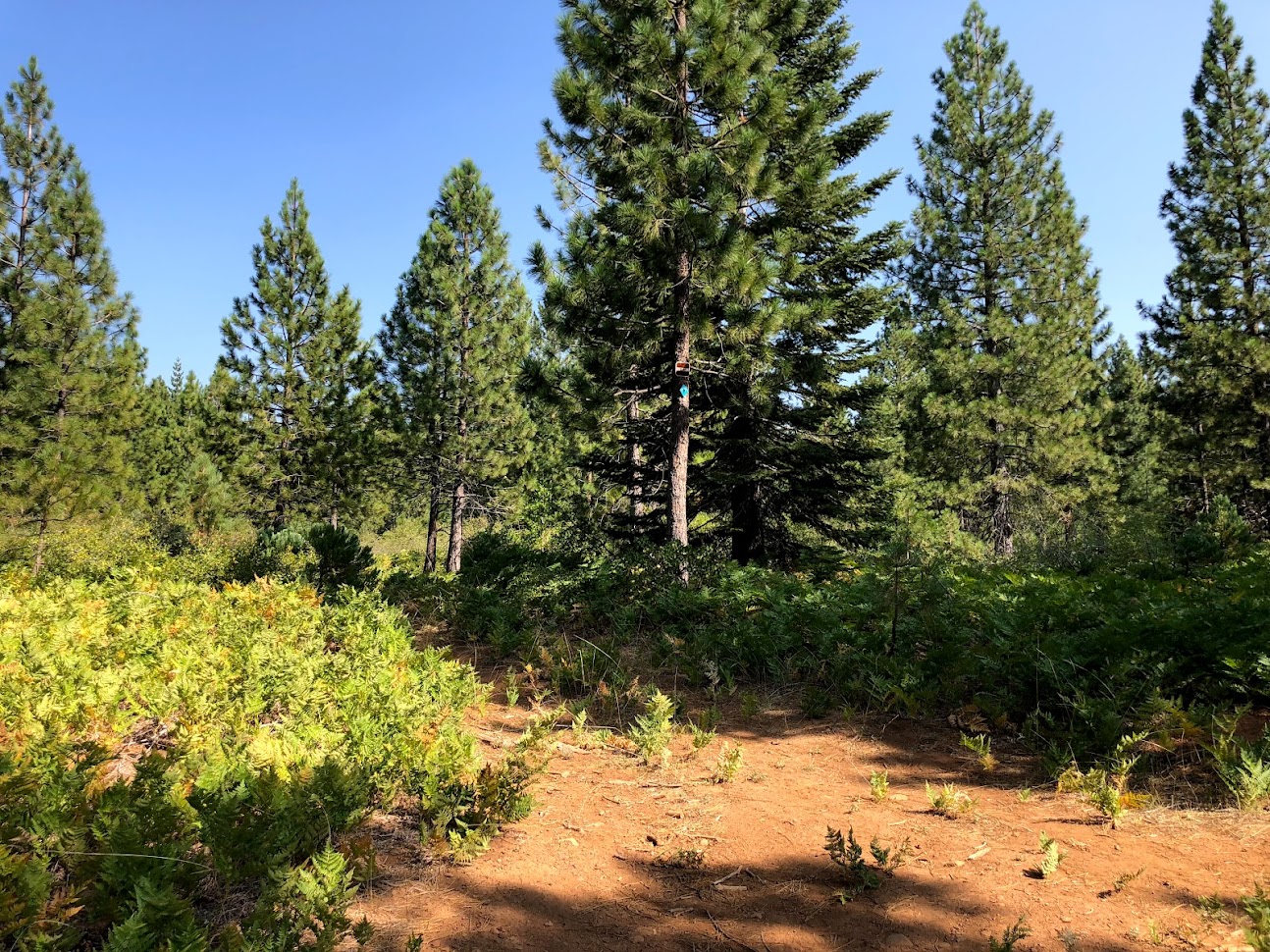 For what it’s worth, I think we may have already been in the activation zone when we parked. But I’d researched the area on Google Maps satellite view and noted that we may be able to get out to a clearing.  This was confirmed by a 2013 trip report by Eric KU6J (sk).  I didn’t know for sure that we’d still be able to get to the clearing without some bushwhacking, so I paid attention to potential operating spots on the way up. 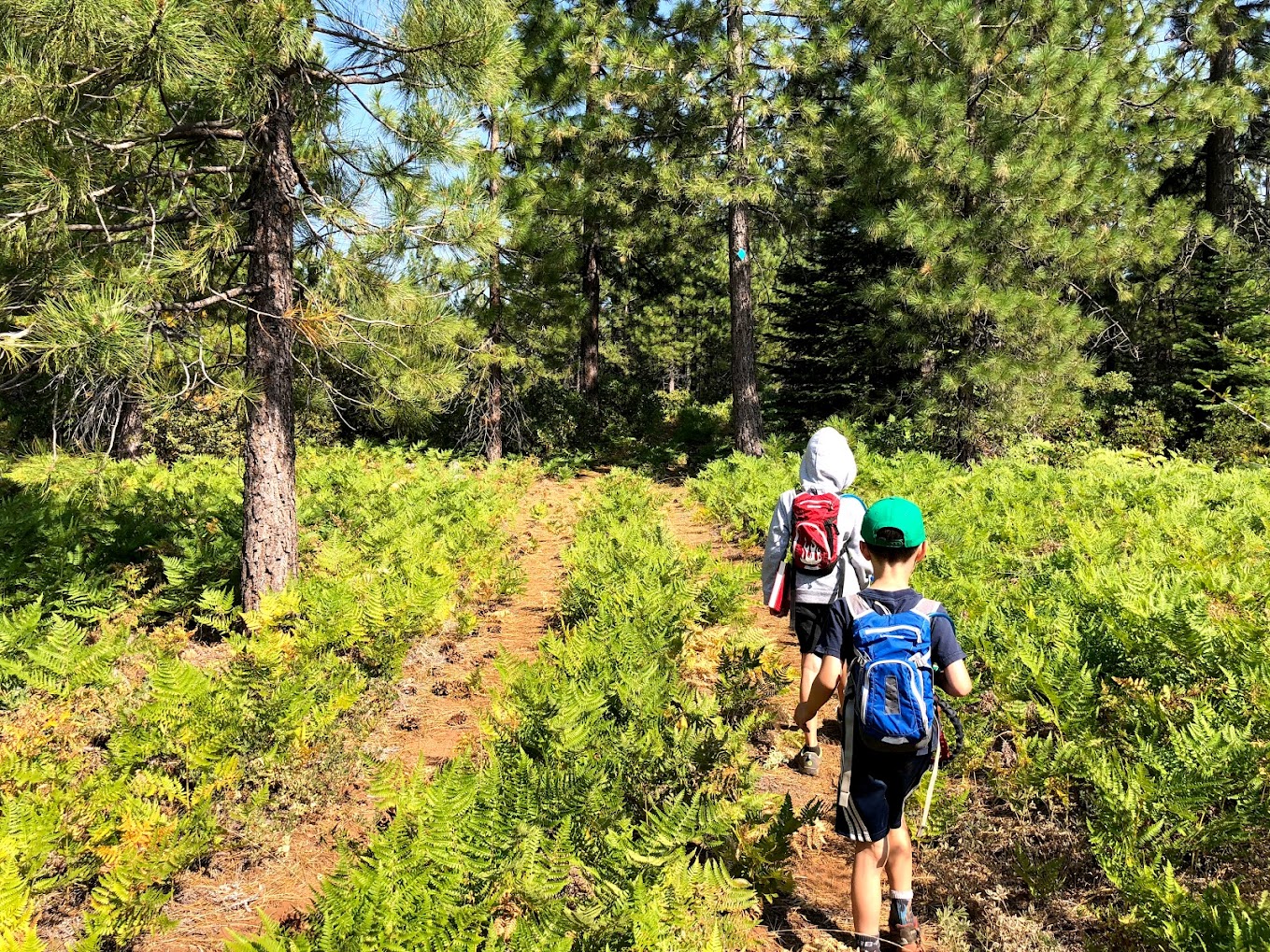 A little ways up, there’s a clearing which I think is pretty close to the true summit, and perhaps where Jeff AA6XA had done his activation.  We pushed through here, looking for a way to an old motorcycle trail on the other side. 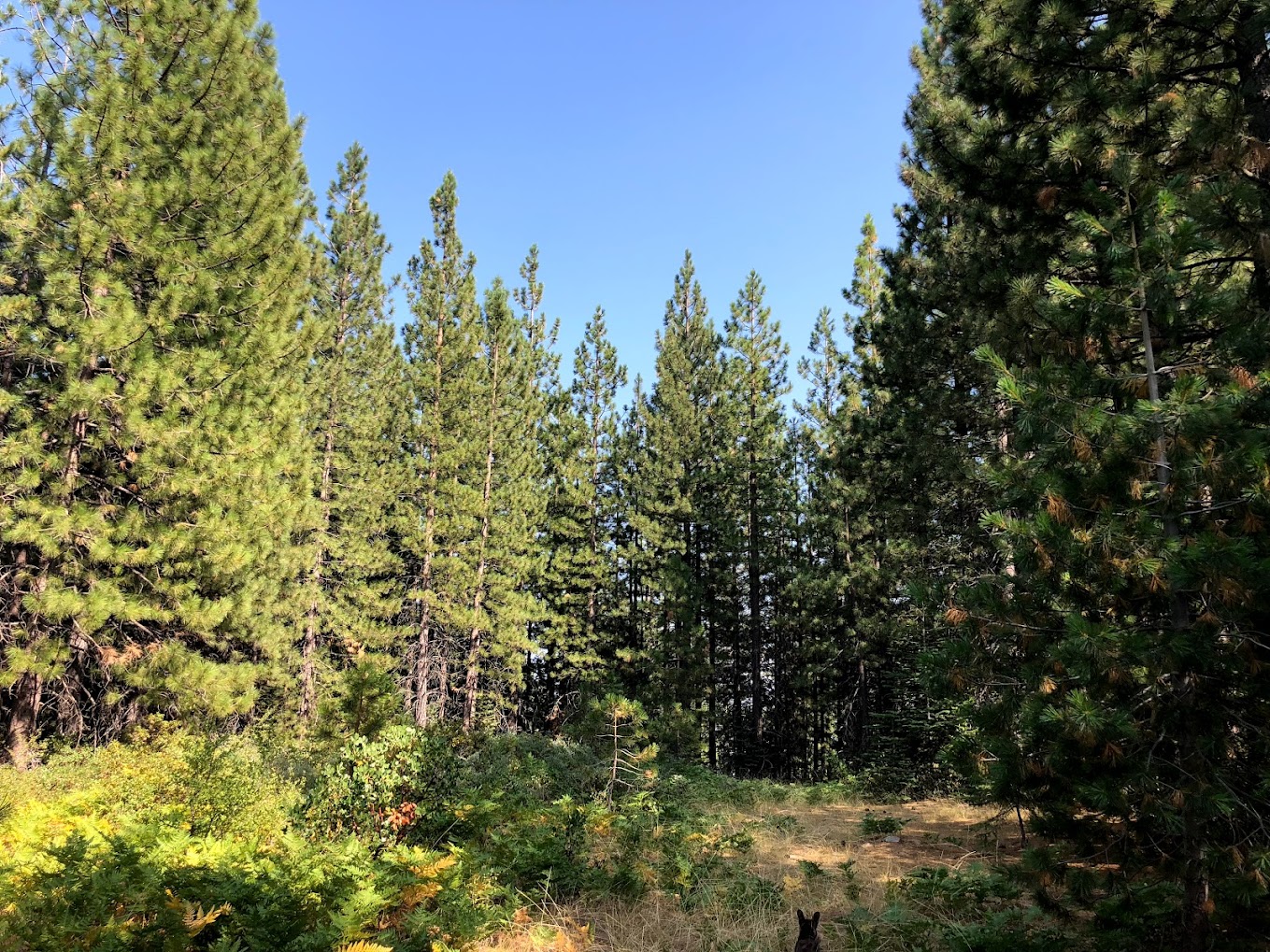 Clearing at the top of Lowell Hill Ridge

Going straight and to the right a bit, we made it through to the trail without any real bushwhacking.  Apparently, the trail is still used semi-regularly. We saw dirt-bike tire tracks and the trail was pretty sandy/soft (almost annoyingly so). 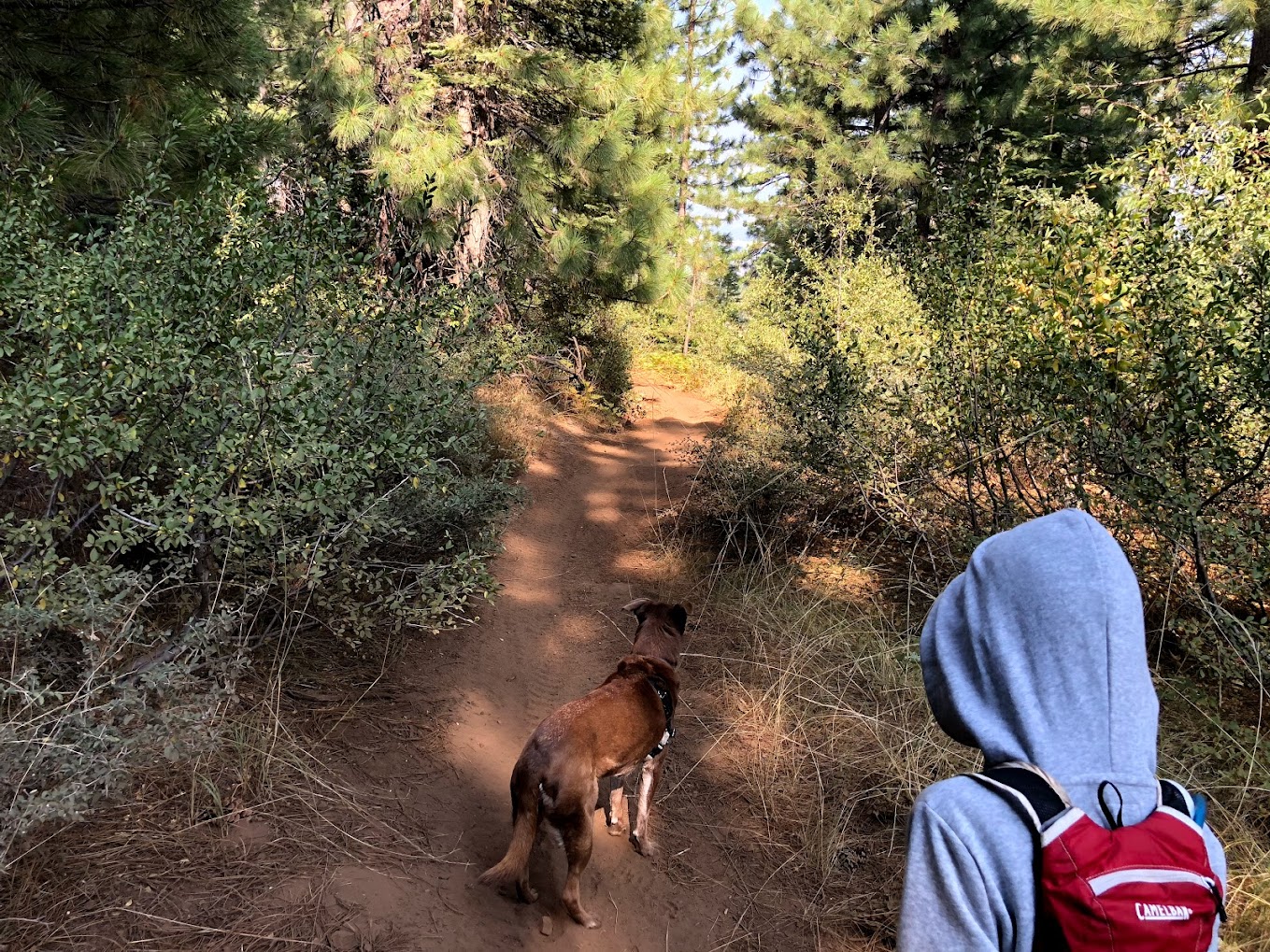 Hiking on the motorcycle trail

A little bit further, the trees and brush opened up to an expansive view to the southeast. There was even a bench to sit on. 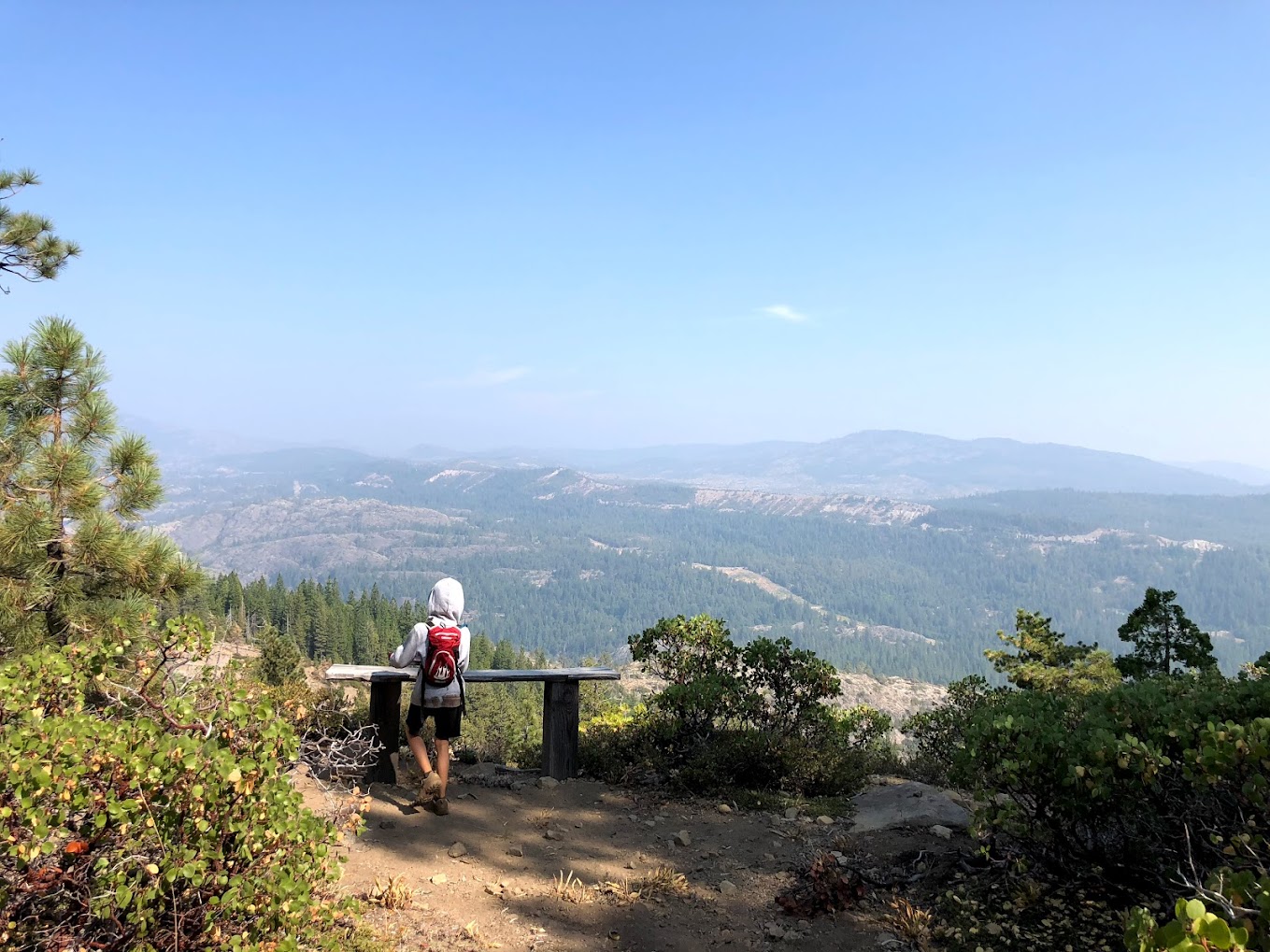 Looks like a great spot to sit and operate!

The boys really wanted to get the hammock set up in the trees since we weren’t able to find a suitable spot on Grouse, earlier in the day.  So I set down my radio gear and went to set up the hammock so they could relax, snack and read their books while I operated. 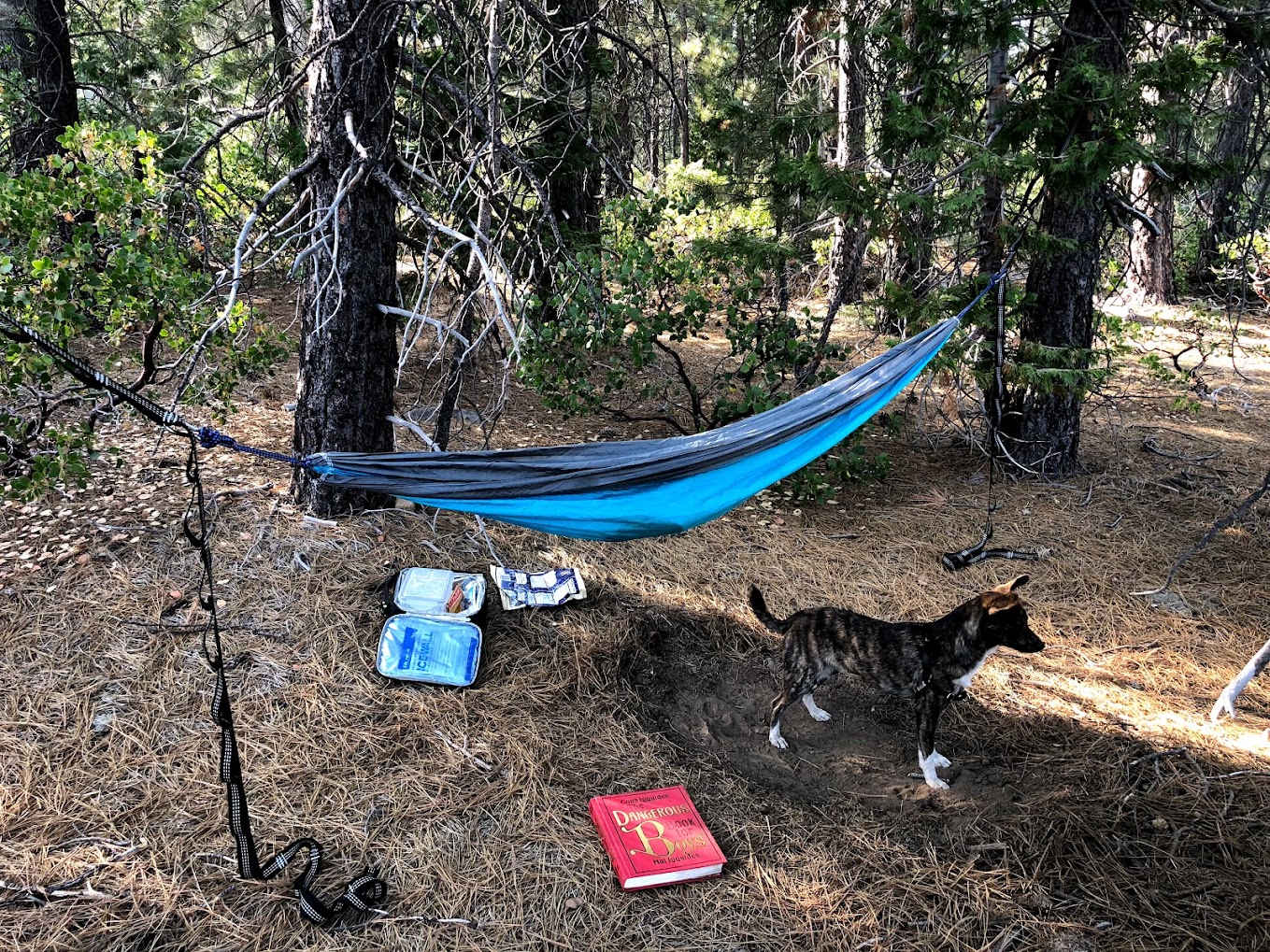 With that squared away, I went to set up my SOTA operation.

I decided not to run the dipole on this one, opting for the end-fed half-wave.  This would limit the power I could run, but setup was easier and faster.  I decided to use the FT-891 since I had plenty of battery left and I could run a little bit more than 5 watts with it. 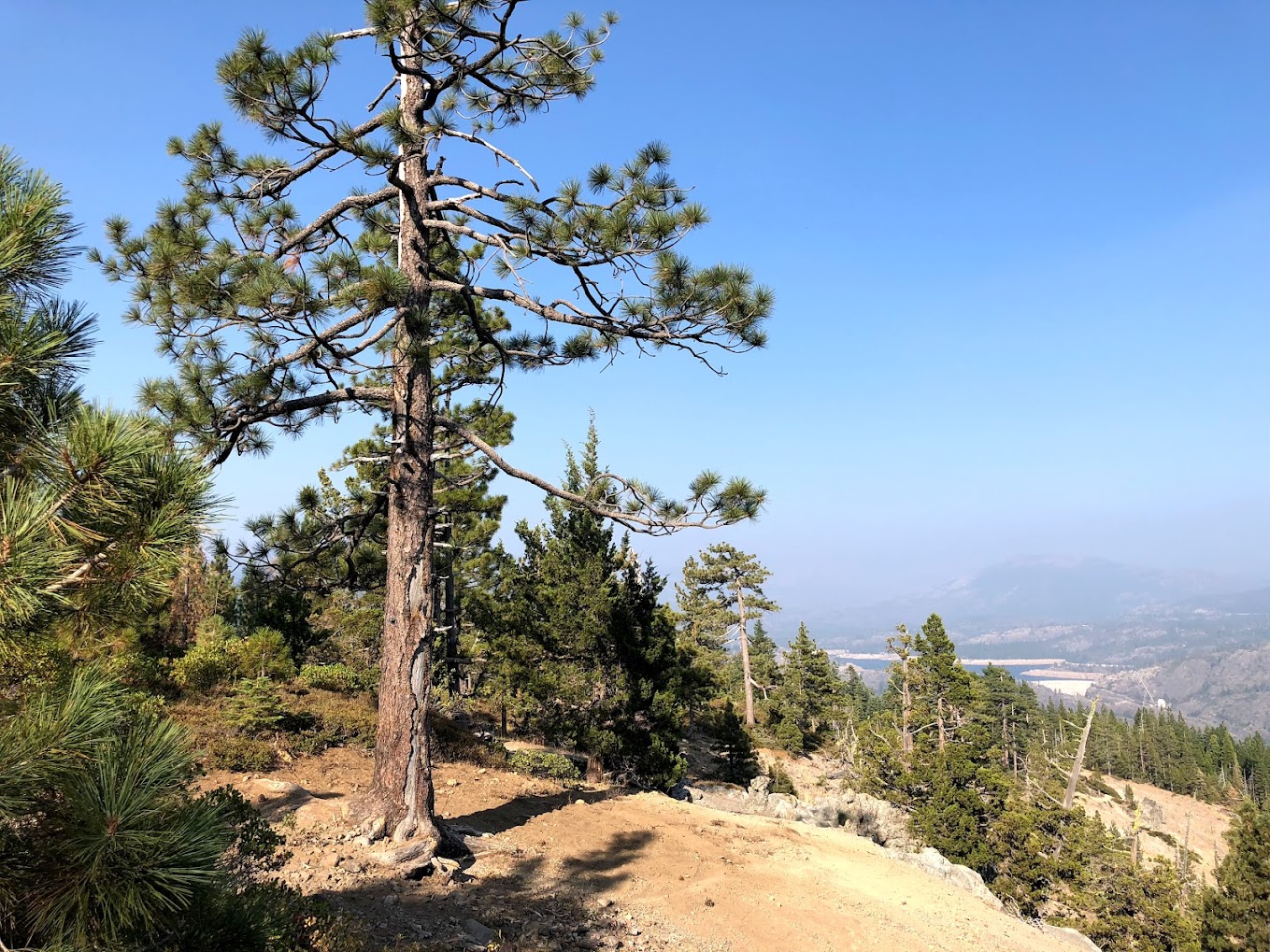 I threw my antenna over a branch of this tree

I decided I’d put all my gear on the bench and operate from there.  Why not?!  This allowed beautiful views, comfort, and also allowed me to keep an eye on the boys. 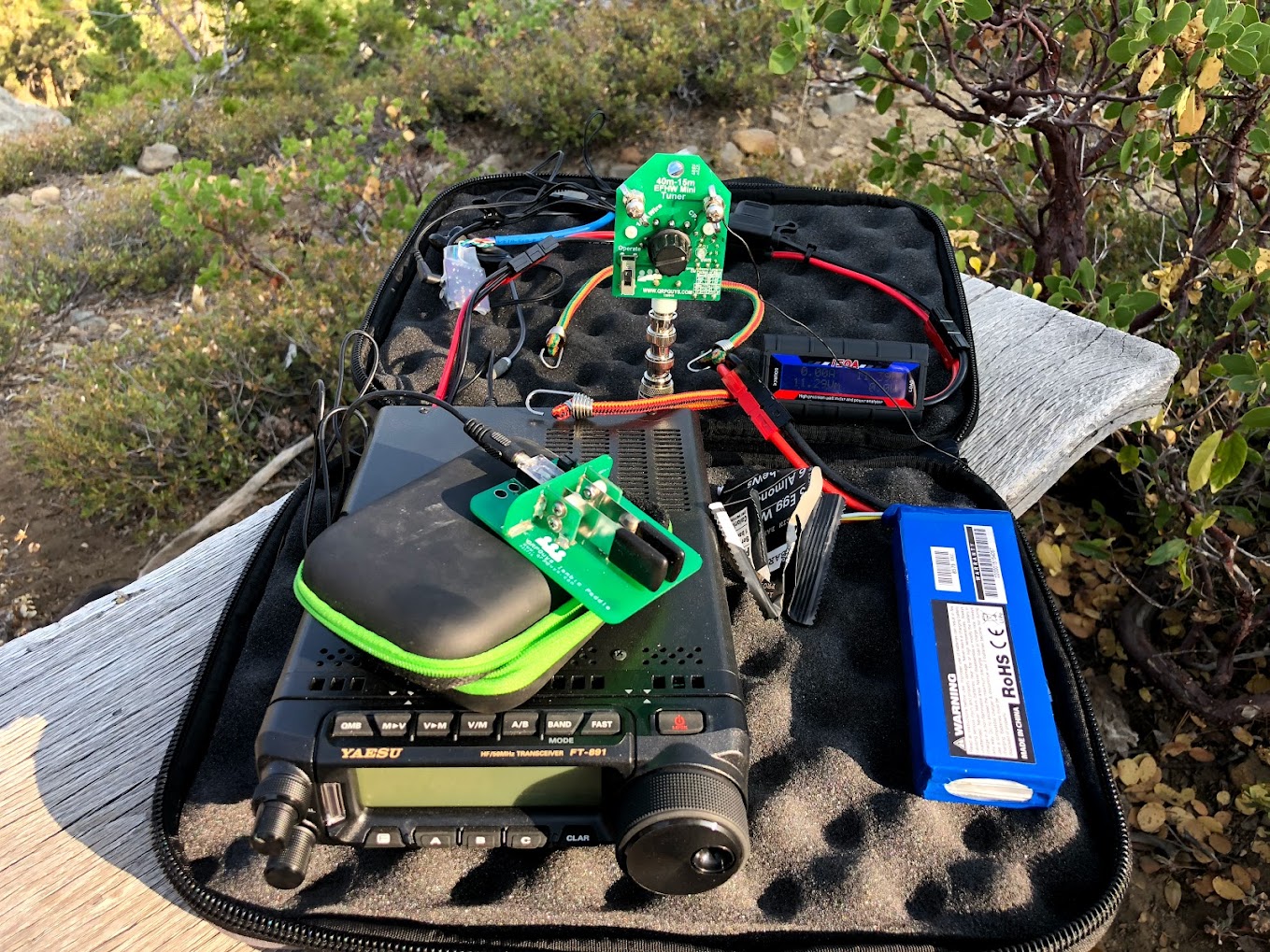 The FT-891 and QRPGuys paddle and EFHW matching unit

I noticed I had cell reception, so tuned the antenna for 40 meters, set the power to 12 watts, and sent out a spot once I found a clear frequency.  For some reason, my phone couldn’t send out the spot.  I figured it was incorrectly reporting I had service, so didn’t think much of it.  I started calling CQ, knowing the RBN (Reverse Beacon Network) would pick me up, which would then get me automatically spotted by RBNHole (the software for automatic SOTA spots).  I was wrong.  The SOTAWatch website had gone down again, which it had been doing on and off over the past few days.  I called CQ numerous times with no answer.  I got on the SOTA-NA Slack chat group and checked to see if anyone there could chase/contact me.  Michael KX6A came to the rescue with my first contact.  He then also posted a spot on DXSummit.fi, which got me another contact.  I kept calling CQ, but wasn’t getting anything.  But I wasn’t worried about not getting enough contacts.

There happened to be two “State QSO Party” contests going on – Kansas and Hawaii.  This is where the band scope function on my new FT-891 came in handy!  I didn’t want to try and use a website to find stations I might not even be able to hear.  Rather, I used the scope on the FT-891 to spot the strongest stations and tune to them.  I listened for a little bit on each one to get the exchange, then threw in my call.  I got contacts with three more stations for a total of 5 SOTA contacts.

I would have been only a little disappointed if I’d walked away with just one contact.  I love getting points for activating summits, but SOTA for me is mainly an excuse to get out there and see all of these different places and enjoy it.  And it’s the answer for “what now?” once I’ve reached a summit.  I had to work a bit harder for contacts on this summit, but it was fun! 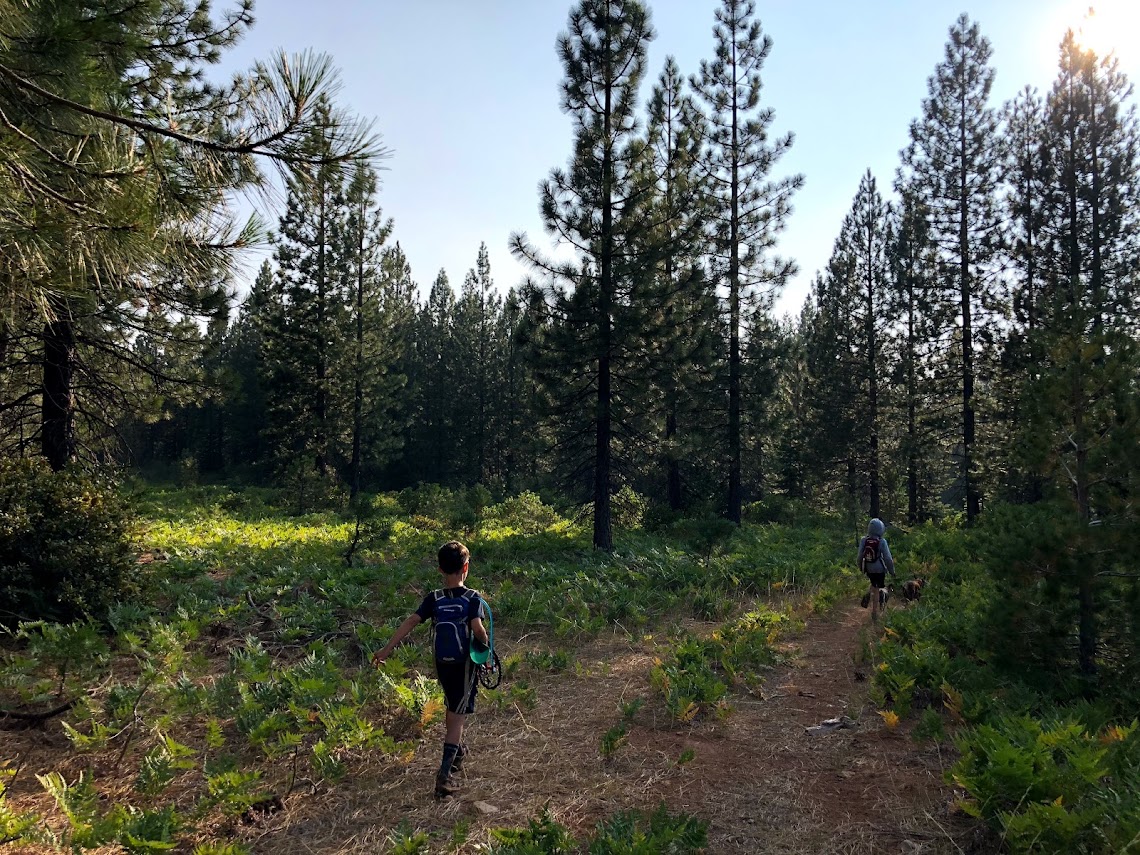 Hiking back to the car