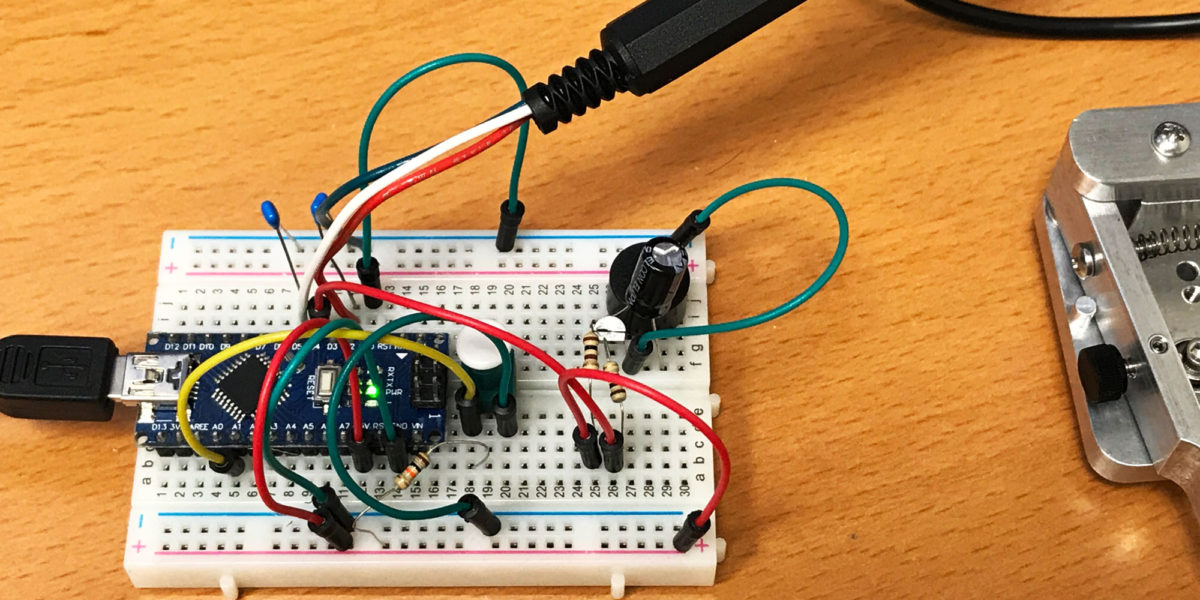 Well, I’m 3 sessions into CWOps CW Academy, with the fourth happening tonight. So far, I’m really impressed. I’ve got a great advisor, and having some structure and accountability to learning morse code is really moving things along.

In preparing to do CW Academy, I wanted to make sure I could practice at work and at home.  I was going to get one of those keyer kits from eBay (electro-resales has good ones), but I waited too long and they were on vacation when I went to order one.  So, I started out by bringing my FT-817 to work, along with the Bencher BY-2 paddle I’m borrowing (I’d thought I lost my portable paddle at the time—see my post on the DCP paddle).  Lugging an FT-817 and Bencher paddle to and from work is obviously not very sustainable.

Having solved the paddle issue by getting the DCP paddle, I decided I’d finally put together the K3NG keyer on a breadboard, since I had a spare Arduino Nano hanging around.  Working off of an example schematic, I had to go to Anchor Electronics and embarrass myself with my lack of knowledge of polarized vs. non-polarized capacitors (and whether it was even important for this application).  In the end, I was able to cobble together what I needed, load up the software, and I had a working keyer running a little piezo speaker for code practice.

The K3NG keyer software is some seriously robust stuff.  When compiling the software to load up, you have to pick and choose your features, since it has a huge list of features that won’t fit on most regular Arduinos. The aptly-named Arduino Mega is an exception.  I picked a few basic features, including “Command Buttons” and “Command Line.”  Command mode allows you to change settings via a command button and use of the paddle, while command line provides a direct serial interface via computer to many features.

A nice little bonus I discovered, is that, while connected to the keyer using the serial monitor in the Arduino software, the keyer will display the decoded characters as I send them.  This really helps practice good sending and timing.

Now I keep my American Morse DCP paddle and K3NG keyer at work, and practice when I have a moment here and there, in addition to listening using the CW Academy-recommended Morse Trainer.  I still have my FT-817 and the Bencher paddle at home, so I can practice there as well.

I think it’s such a great idea to put some structure around learning morse code, and to start it off at a speed that’ll actually be useful. I’m so grateful for the volunteers that run CW Academy. My advisor, Rob K6RB, is super-helpful and experienced and has a great sense of humor. He has plenty of patience, while still being able to keep things moving along nicely in a group of 5 students.

We meet each Monday and Thursday evening, for about 45-50 minutes.  During this time, we go over the stuff learned since the last meeting, and then go over the skills we’ll be learning for the next one.  In between meetings, we’re expected to practice an hour a day.  When we meet up, we actually practice sending and receiving on Skype.  I have to say, it’s a bit challenging sometimes, when Skype drops a packet here and there, or when there’s an echo in the group.  But overall, it works quite well.

Right at this moment, I’m really having trouble with sending “L’s”—especially one right after the other.  I won’t lie—I’ve pounded my fist on the table a few times in frustration.  But whenever I get there, I try to take a break and switch back to listening.

We’re told that at the end of CW Academy Level 1, most of us (85% success rate) will be able to send and receive at 15wpm or better for casual QSOs.  And while I’m definitely not there yet, I believe it’s actually possible.  And for that, I am very excited.