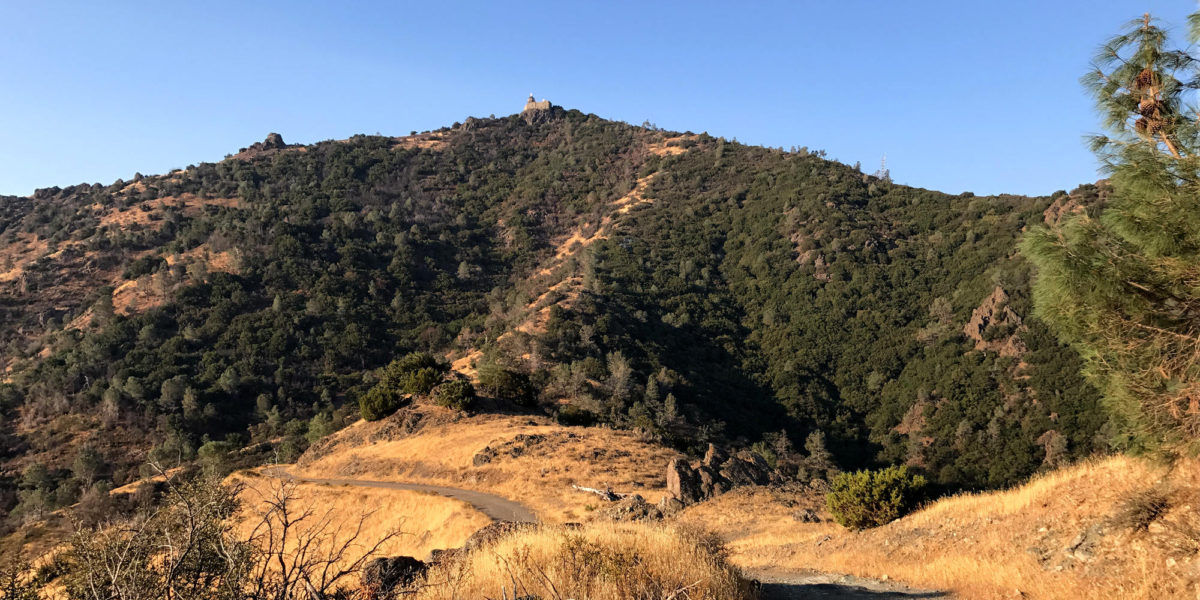 I saved some time on this trip by getting there quickly, but lost that time and then some, untangling my antenna wire. Oh well! Overall, I still had fun. The weather was perfect, and the equipment and airwaves worked. Here’s the report.

I live in Silicon Valley. To get to Danville (exit for Mt Diablo) only takes about 45 minutes. There’s another 40+ minutes of driving to get up Mount Diablo.  I wanted to get as early of a start as possible, but the park doesn’t open until 0800.  Hoping the gates might actually open earlier, I took a chance and left around 0615. This got me onto South Gate Road around 0700. The bottom gate was open when I got there, but I don’t know that’s something that can be relied on. 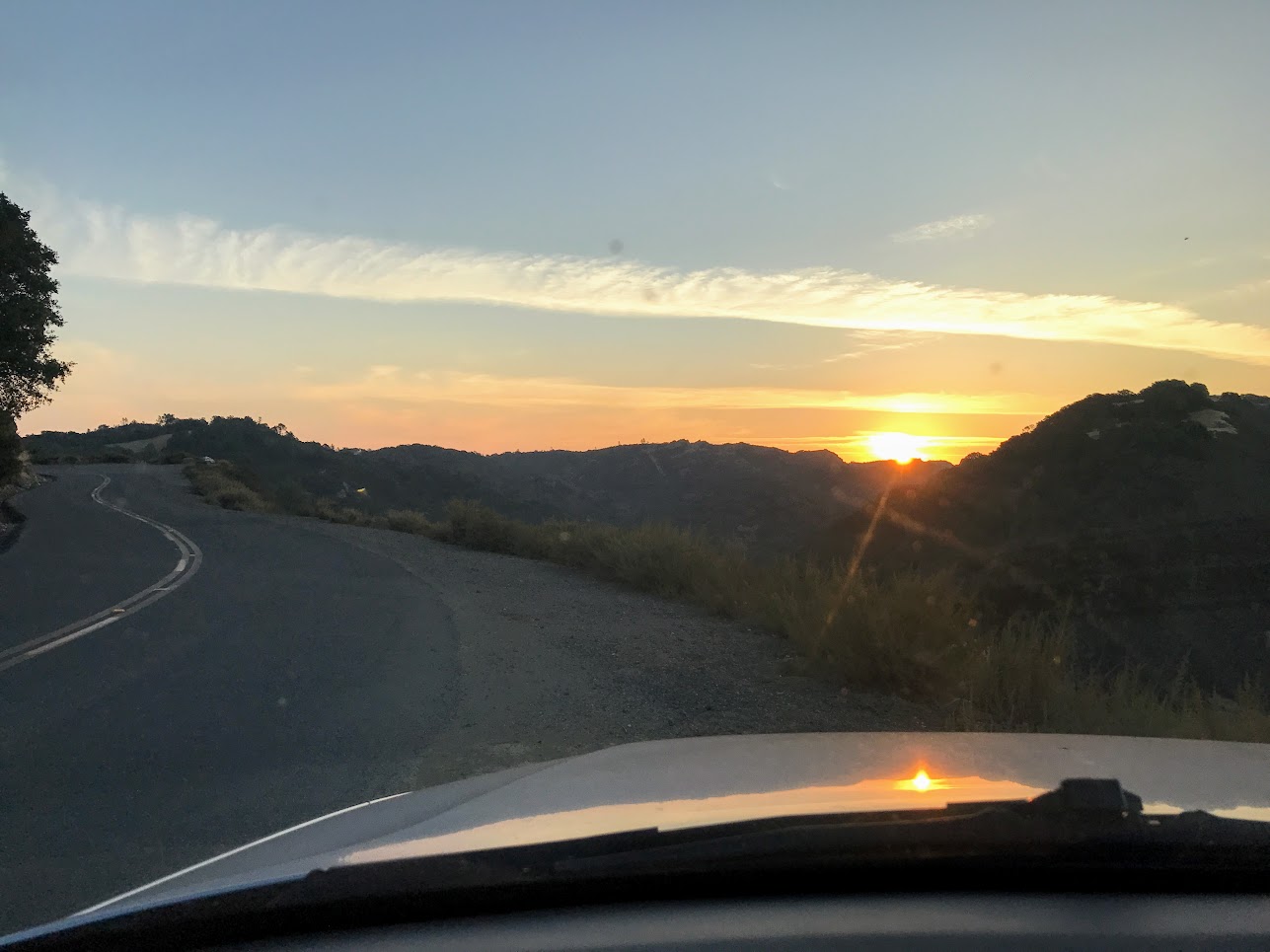 Watching the sun rise as I drove up

After about 15 minutes, I got to the actual gate area. There was a guy getting back on his motorcycle, and it looked like he had perhaps just opened the gate. I asked if he worked in the park. He said he does, and that I should self-register. OK, so apparently no problem showing up early (this time).  I pulled off to the side, paid my $10, and carried on. 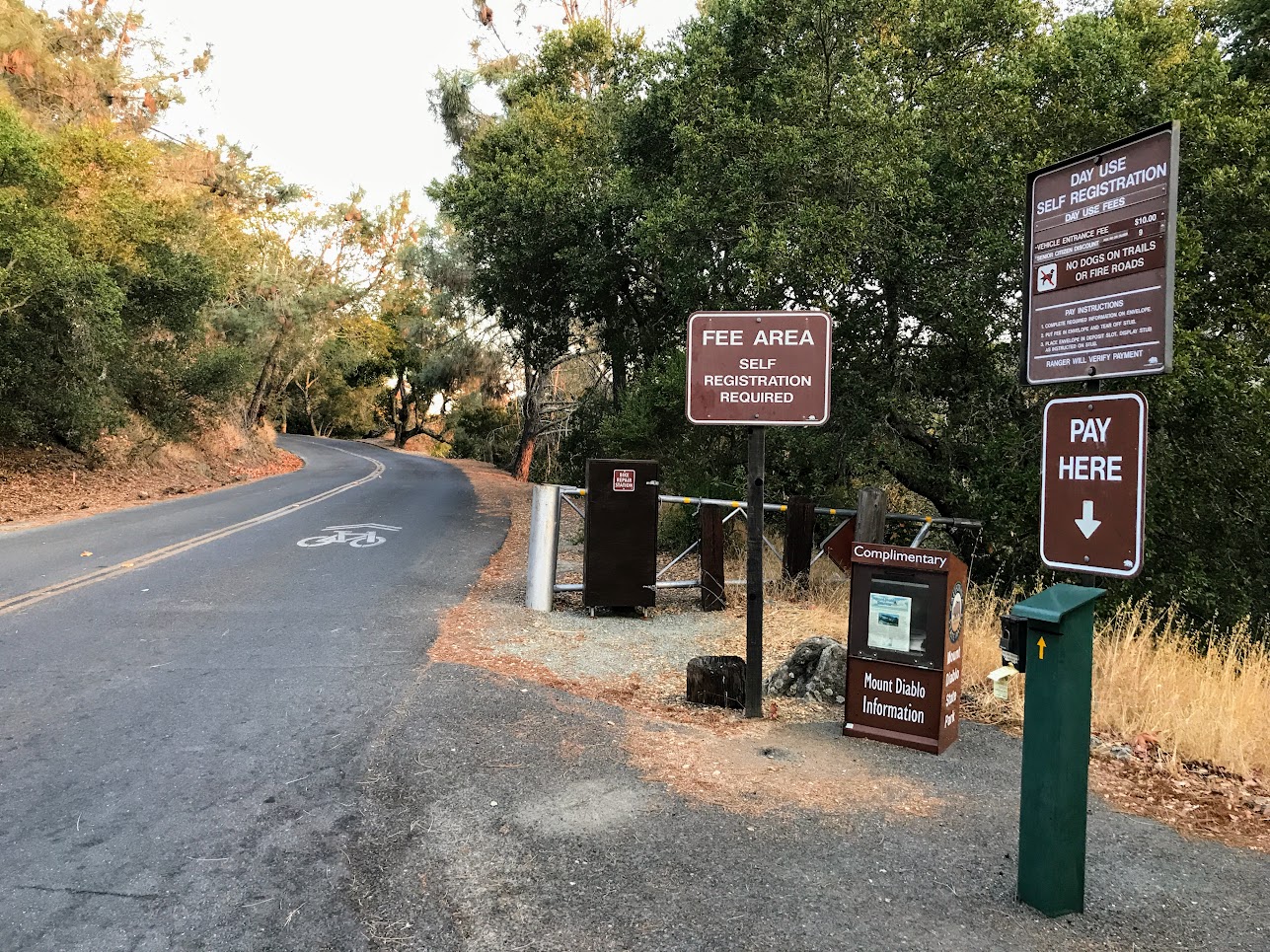 Just past the entry booth

There were several picnic areas and campgrounds on the way up. I’d like to come with my family to camp here sometime.  Some of the picnic areas had restrooms, so I took the opportunity to take a quick break. 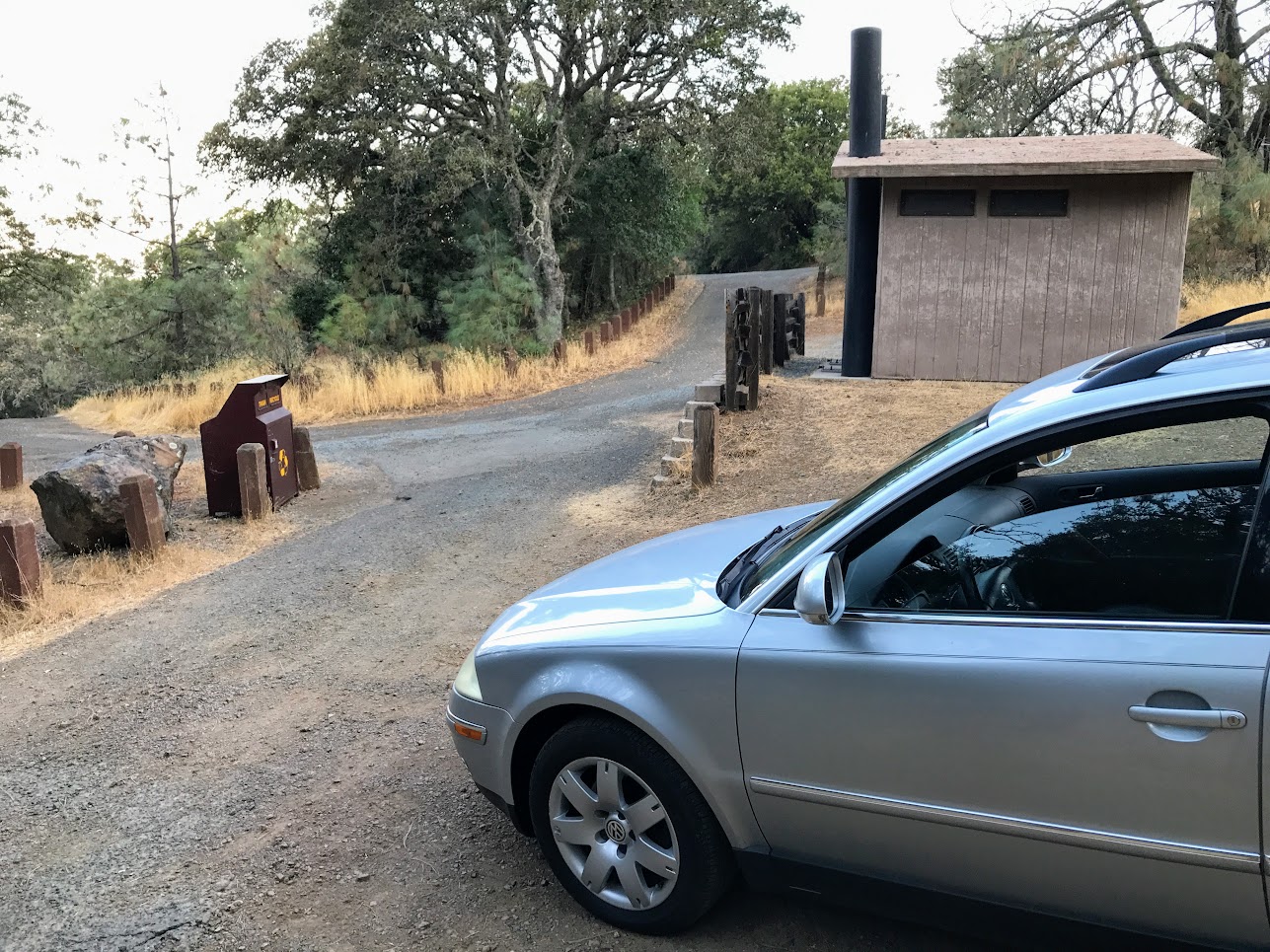 Before long, I arrived at the North Peak trailhead. I almost drove by it, but since I was already driving carefully, keeping an eye out for bikes, it was easy to slow down and pull off the road.  The trailhead area was void of cars, and had a couple of mountain bikers who had just ascended, prepping for their descent by putting on some additional gear.  I didn’t waste any time—my bag was packed and ready to go, so I backed the car in, grabbed the bag, and hit the trail at about 0745. 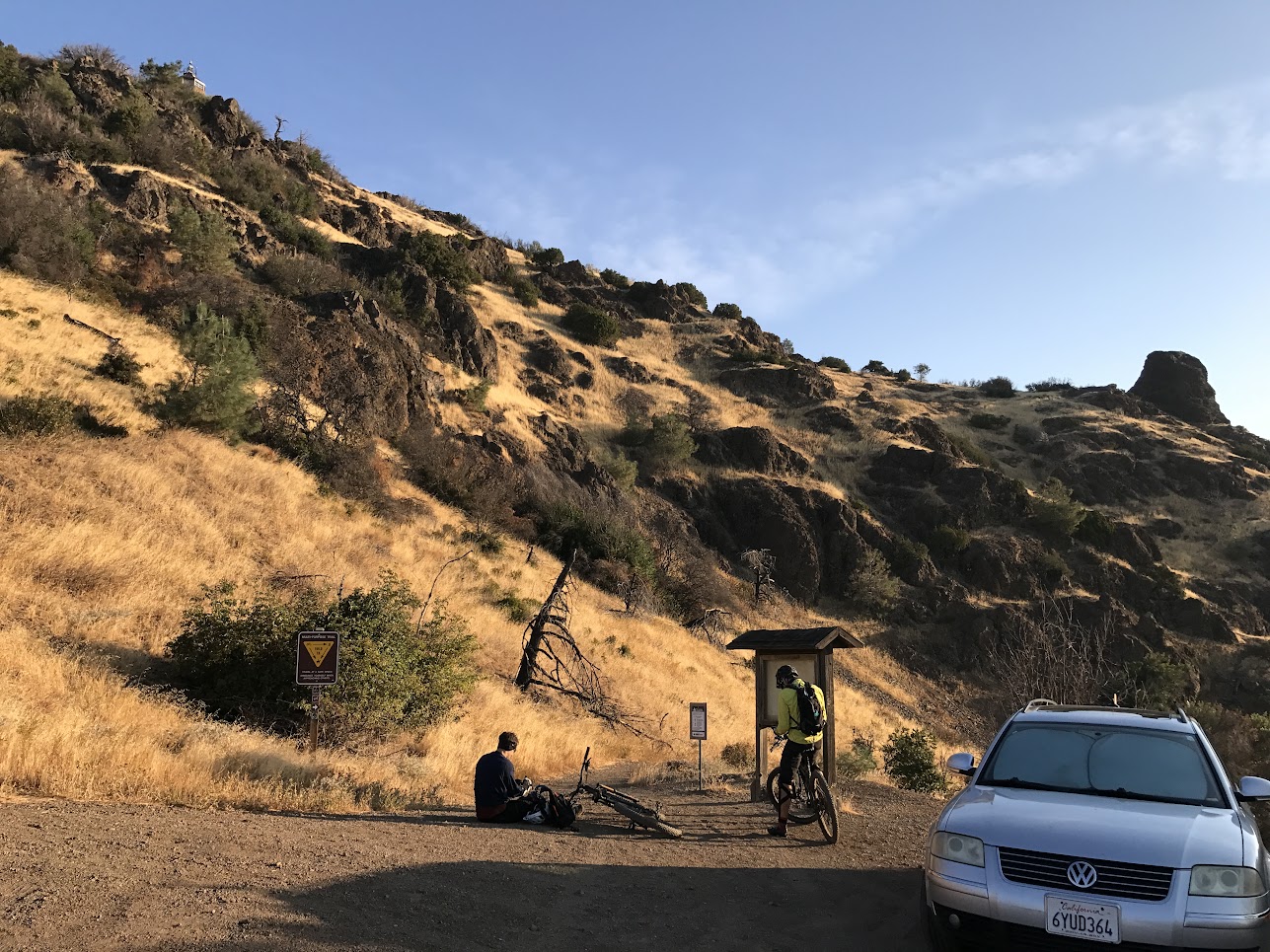 The hike to North Peak

The mountain bikers let me know they’d be coming down the trail shortly, so I told them I’d keep my ears open.  Starting out on the trail, I picked up a brisk pace. Before long, noticing the grade was pretty gentle (downhill), I started running on and off. 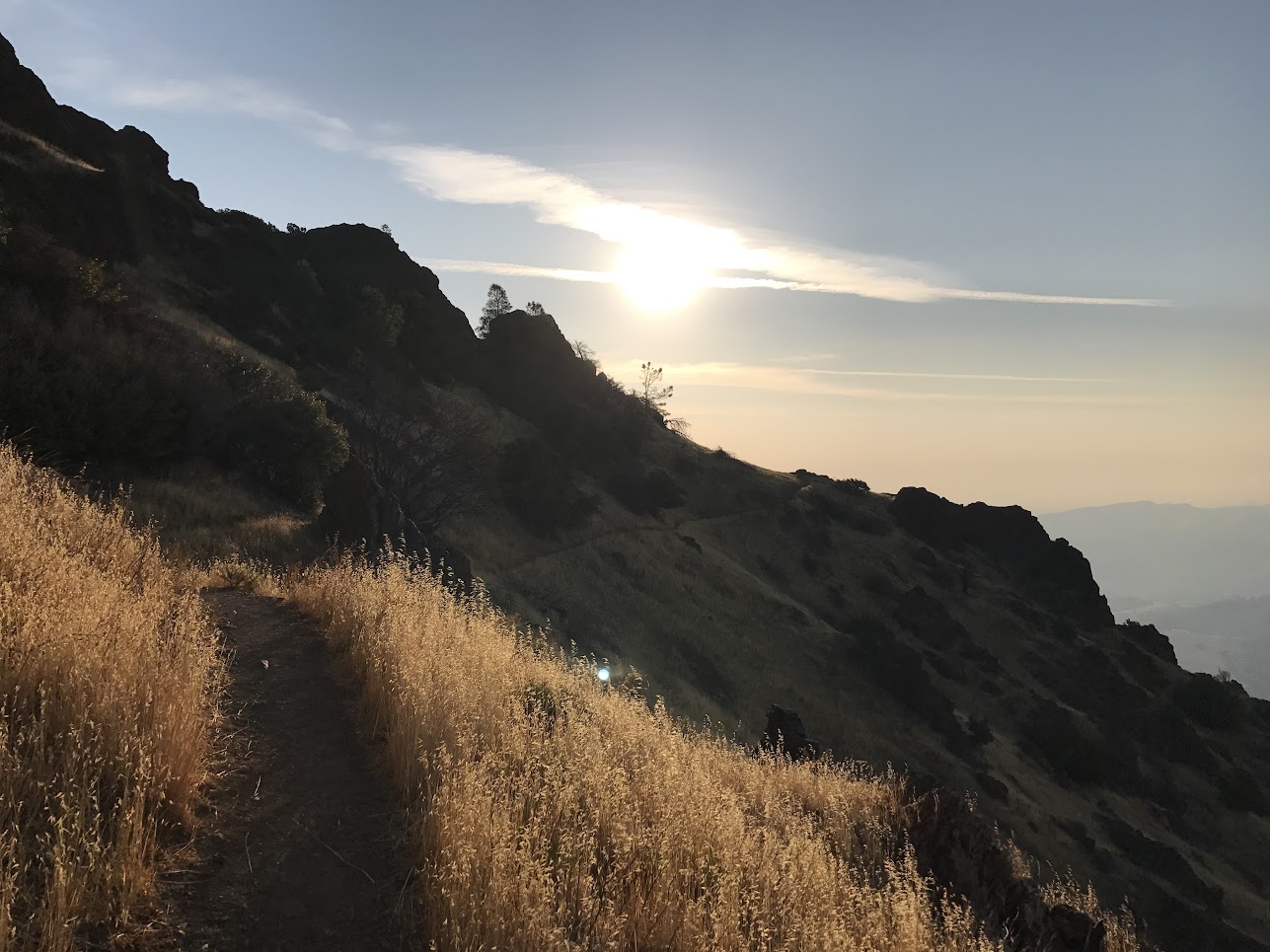 Hiking into the sunrise

A little way in, there was a nice wide spot in the trail, just as the mountain bikers passed. Perfect timing!  Around the bend and on to more descent, with beautiful views of the valley to the east.  Within 5-10 minutes, I had my first views of North Peak. It’s really not very far. 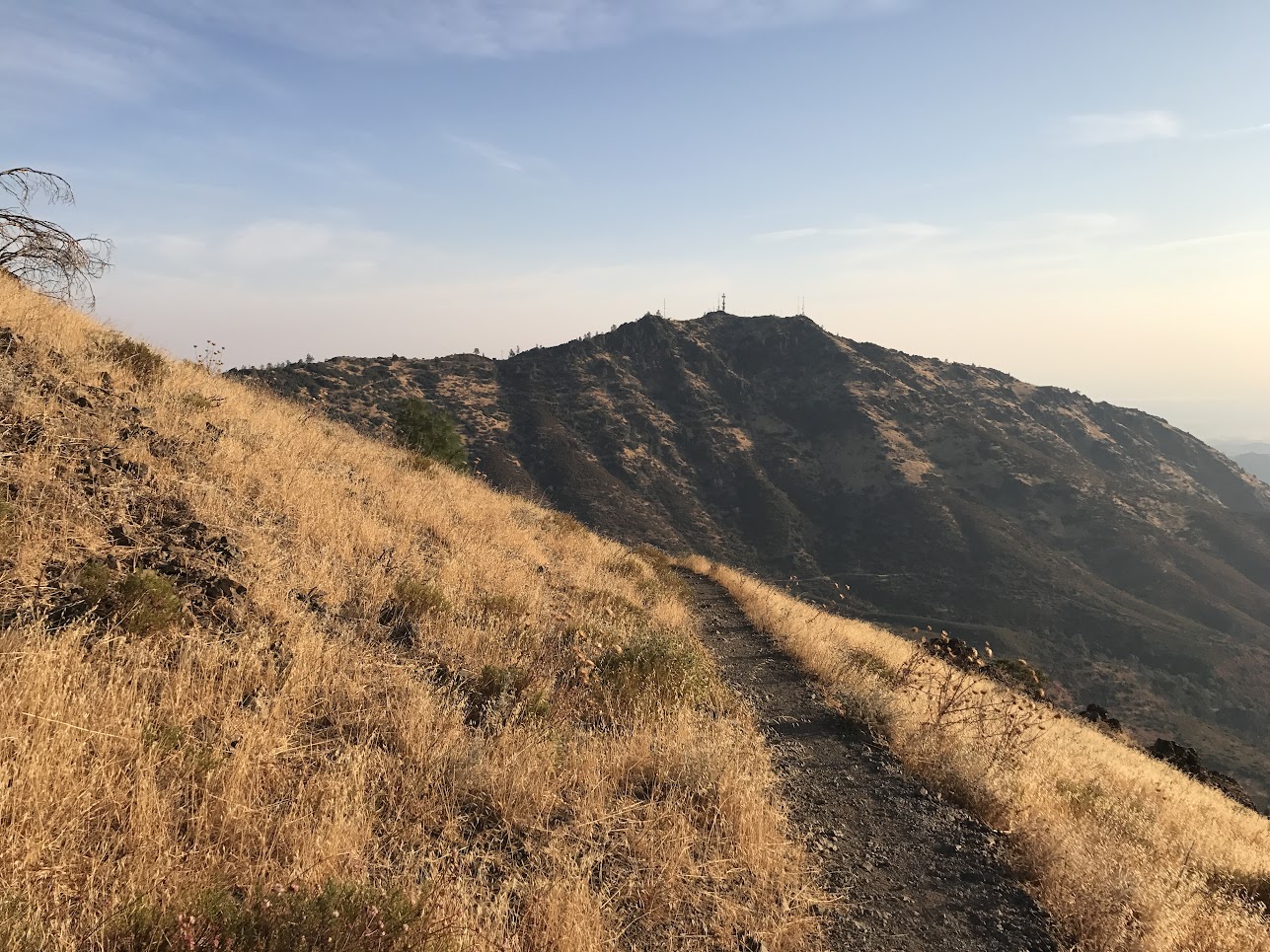 The trail goes up and down, but mostly down. Nonetheless, I eventually caught up with the mountain bikers who’d passed me.  It turns out one of them had a brake failure and had to take the downhills a lot slower.  They managed to stay ahead of me once I caught up, so we didn’t have to play leapfrog.

For the most part, the trail was out in the open, but had a few shady/covered areas. 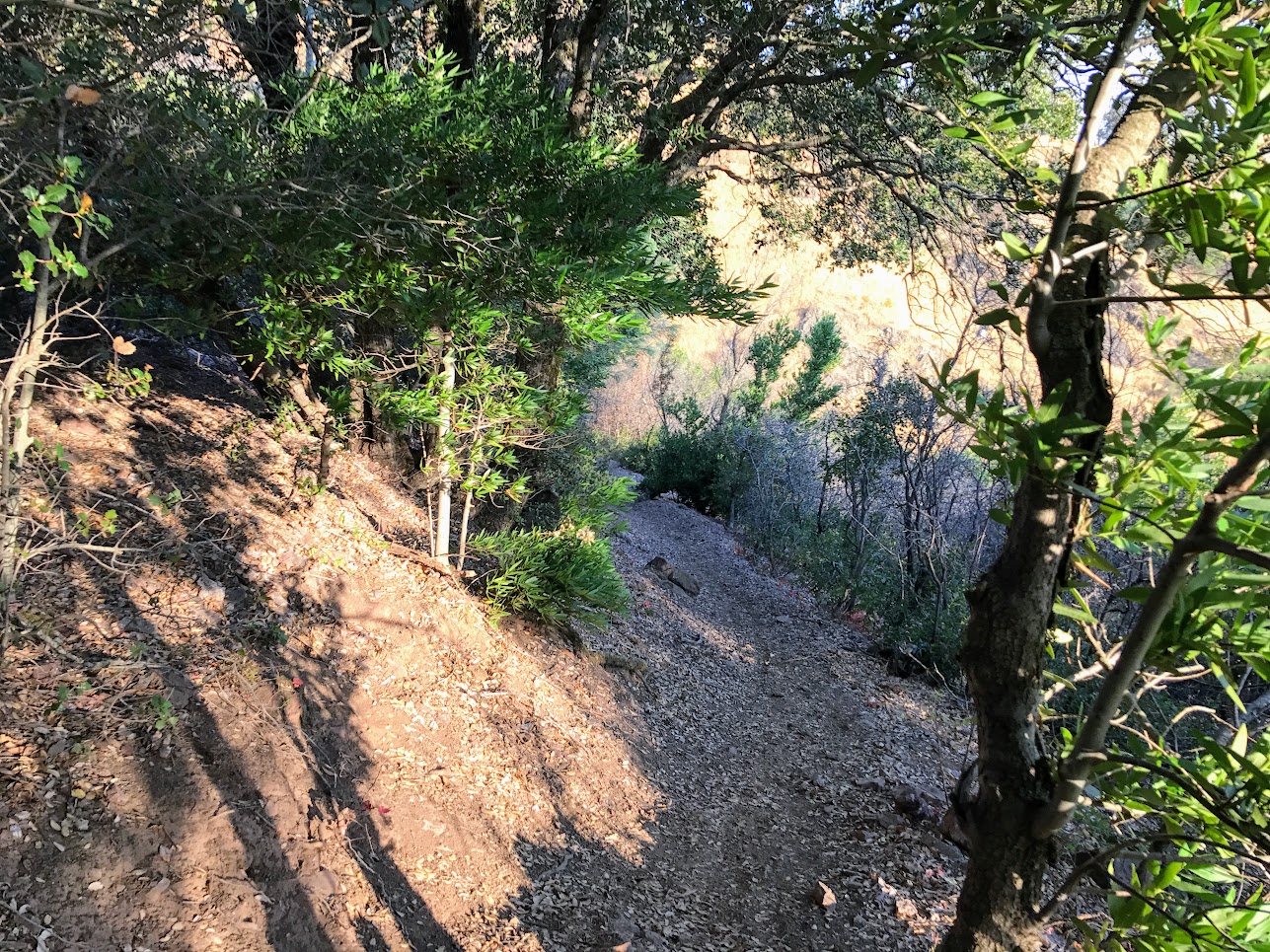 Just before North Peak Trail meets up with North Peak Road to go to North Peak, there’s a little side trail. I knew this was about where the ridge trail to the summit was, so I took this turn. I wanted to get a preview of the trail, for when I’d be hiking up to Mt. Diablo later.  It looked steep, but manageable and not overgrown. 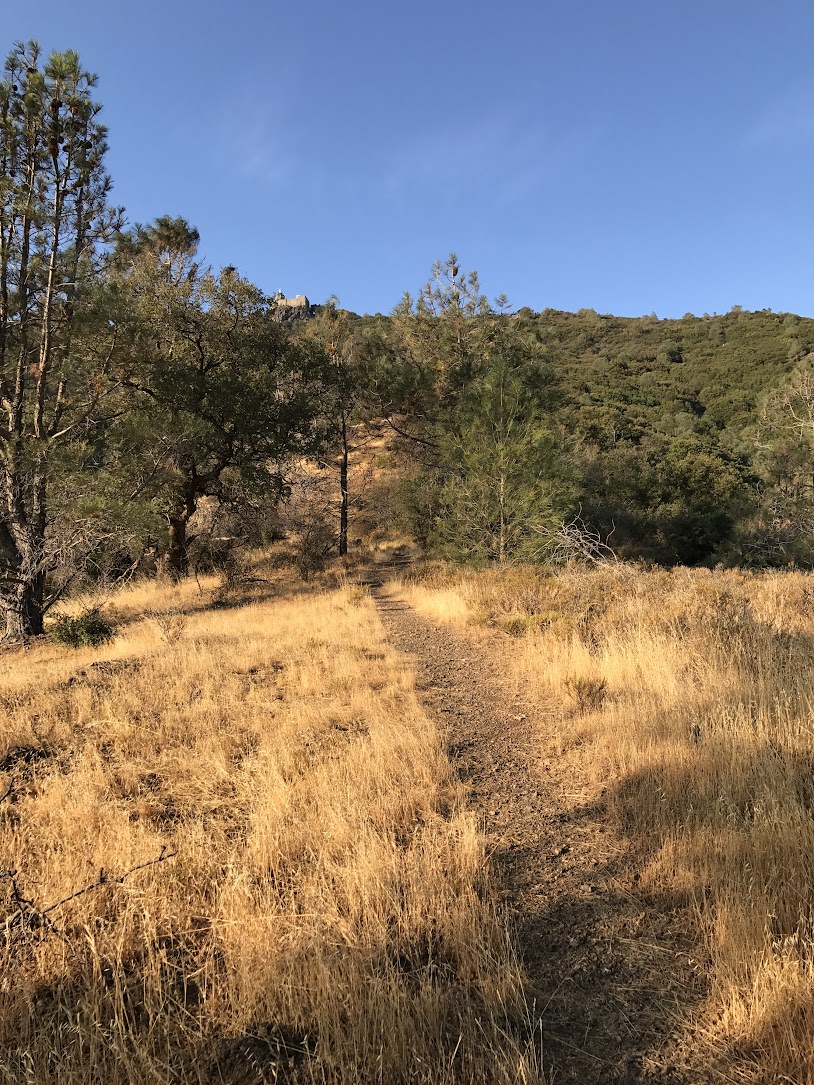 Ridge trail up to Mount Diablo

Approaching the saddle between Mount Diablo and North Peak, there’s a junction with a couple of other trails. The route to North Peak is quite obvious, since it’s a dirt road heading in the direction of the summit. 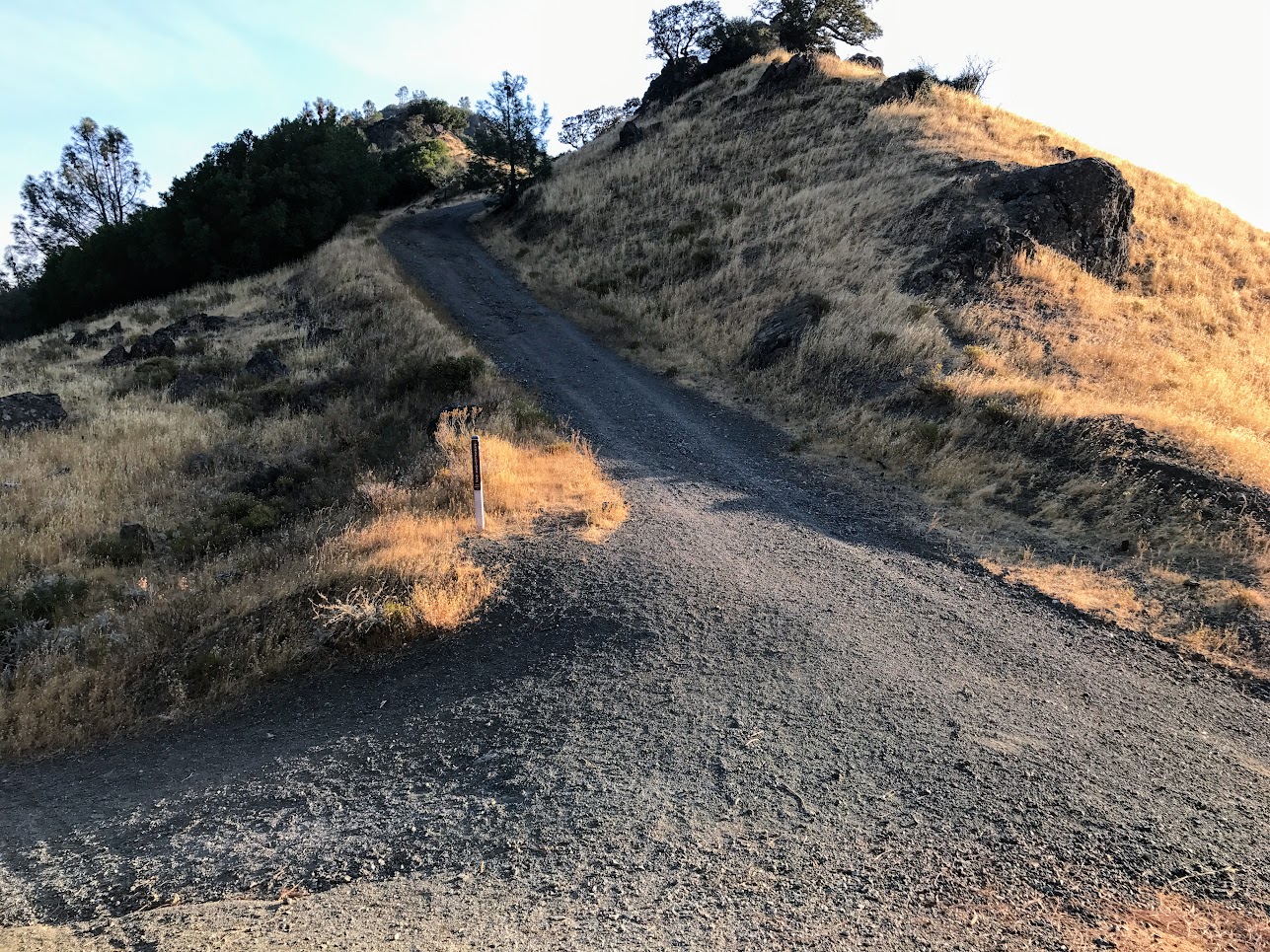 Once on North Peak Road, you’ll be climbing in earnest. It goes up, and pretty much doesn’t quit, with only one or two flat spots. On one of these flat spots, you’ll see a small building on your left. Just past this building, the road dips down, then does a very steep climb up the north side of the summit ridge. 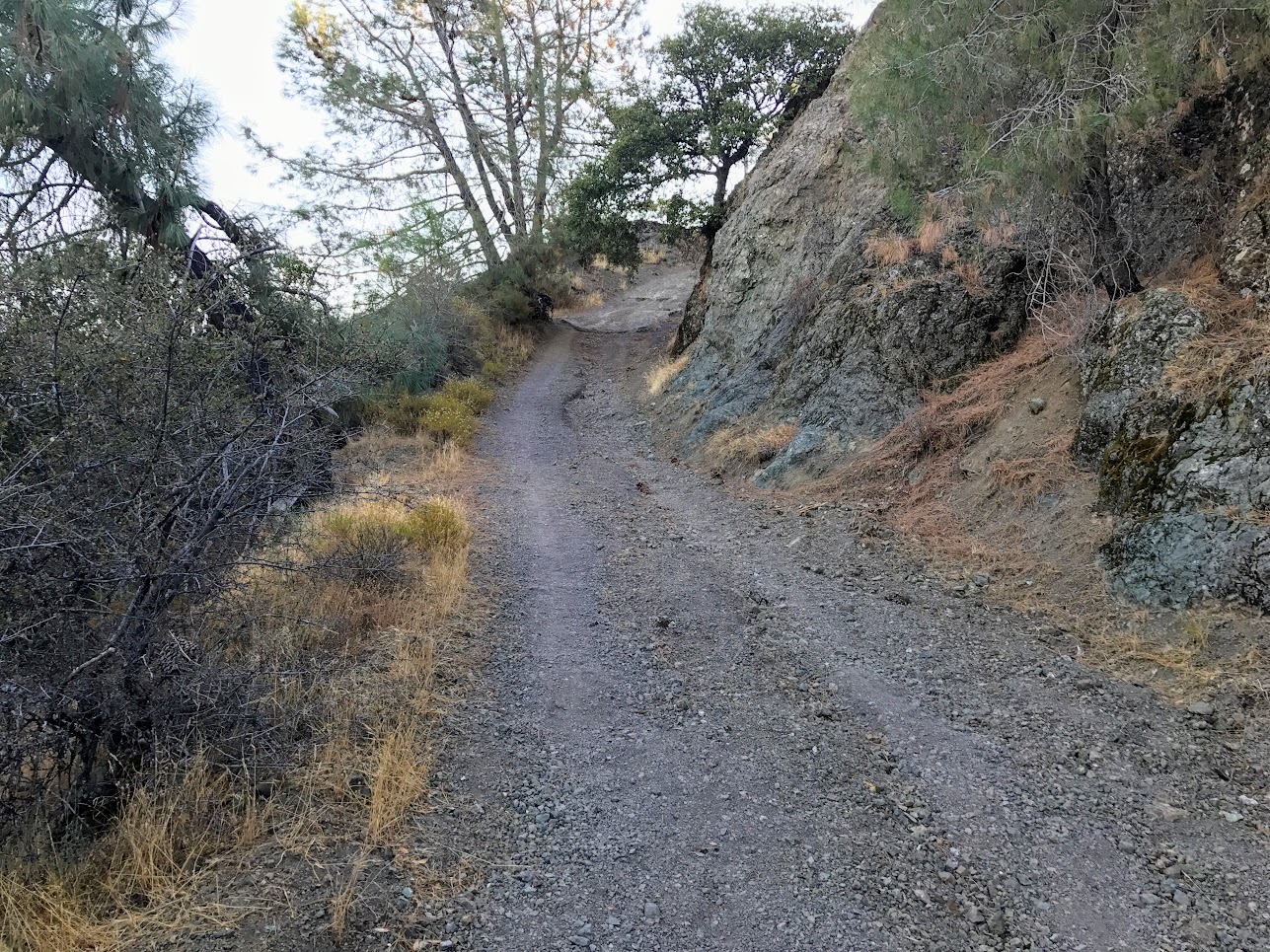 This climb is a little bit tricky, since it’s covered in loose gravel. But nothing too crazy.  Apparently, some vehicles somehow make it up this section of road, as you can tell from the tire tracks.  It must be an adventurous drive!

Reaching the top of that little climb, you’re basically at the top. A little further up, you’ll see the actual summit marked by a small sign, and a couple of communications towers. 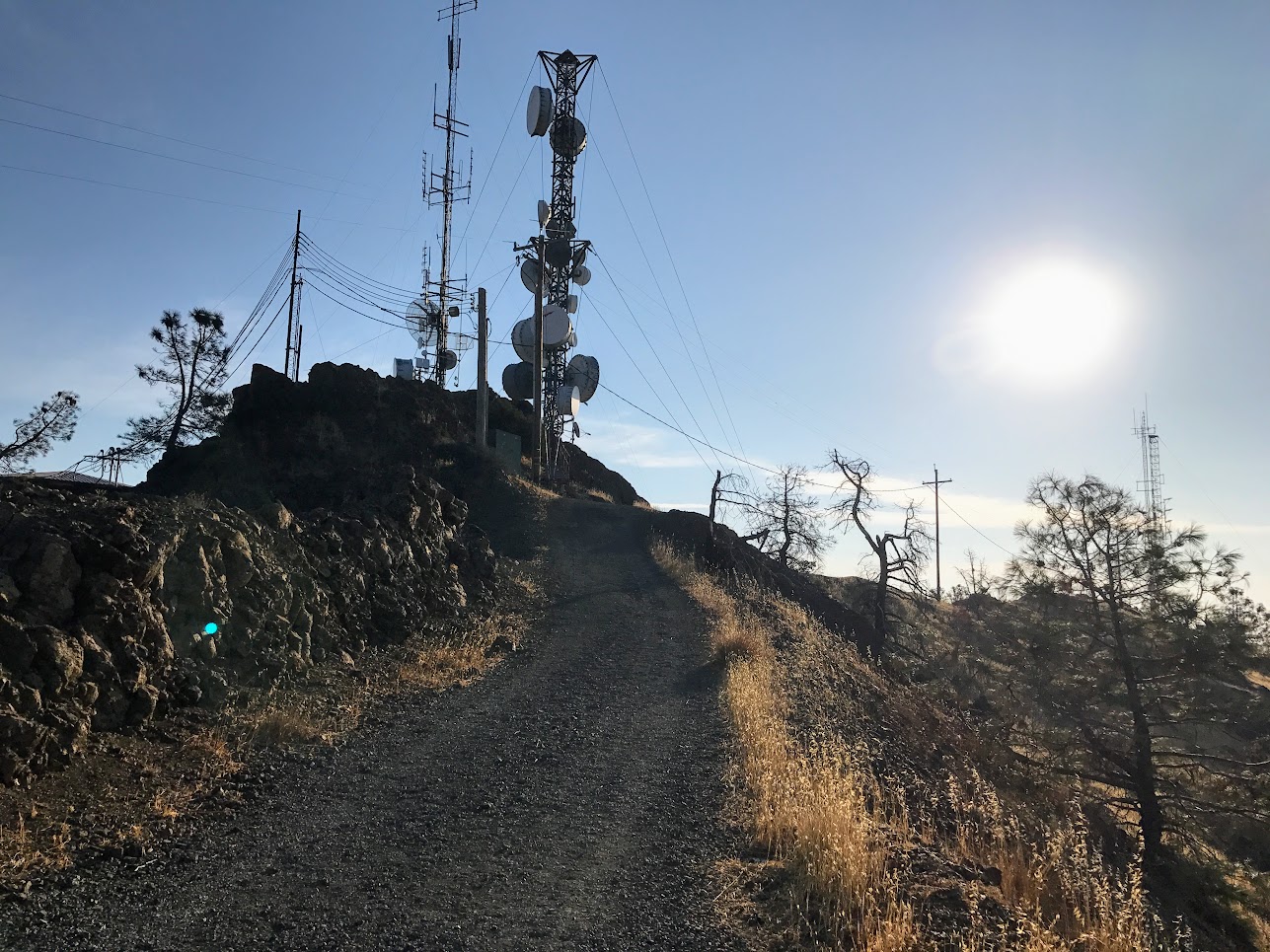 There’s a steel catwalk that takes you right up to the very top, if you like.  I’m personally surprised they don’t have the towers fenced off or have any RF warning signs.  I went ahead and went up the catwalk to stand on the absolute top of the summit, but I didn’t hang around long. I didn’t feel like being slowly microwaved.

I’d made it to the summit in about 35 minutes. I went past the summit a little bit so I could operate from the east side. I spent the next 15 minutes trying to decide where to put my antenna.  That was my first waste of time and more than used up all of the time I’d saved by fast-hiking.  The next waste of time was not being careful with the antenna wire.

After deciding to throw my antenna wire over a tree slightly down-slope from where I was, I proceeded to unwind it and prepare to throw it.  I tied my throwing weight to the end and gave it a mighty heave.  It landed way left of the target, with the wire no more than 5 feet off the ground. At this point, my antenna wire was fine—half of it lay by my feet, not tangled.  However, after missing my shot and pulling the antenna wire and cord back, the cord got tangled in the branches of a dead tree laying on the ground.  I kept pulling and eventually got it loose of this, but somehow managed to put some tangle into things. However, I didn’t notice this at the time.  I threw the weight again.  This time, the throw was good, but the wire on the ground snagged something, and a whole tangled mess of it went into the air, pulling back on the weight a bit, missing the shot again!

I finally decided to go down the slope a bit, untangle the wire a little, then throw it over the tree from this closer spot.  I did so, and the throw was spot on. Great!  But now I had a nasty tangle to deal with.  Usually, since I figure-8 wind my wire, I don’t get nasty tangles.  But I had clearly done something wrong this time. 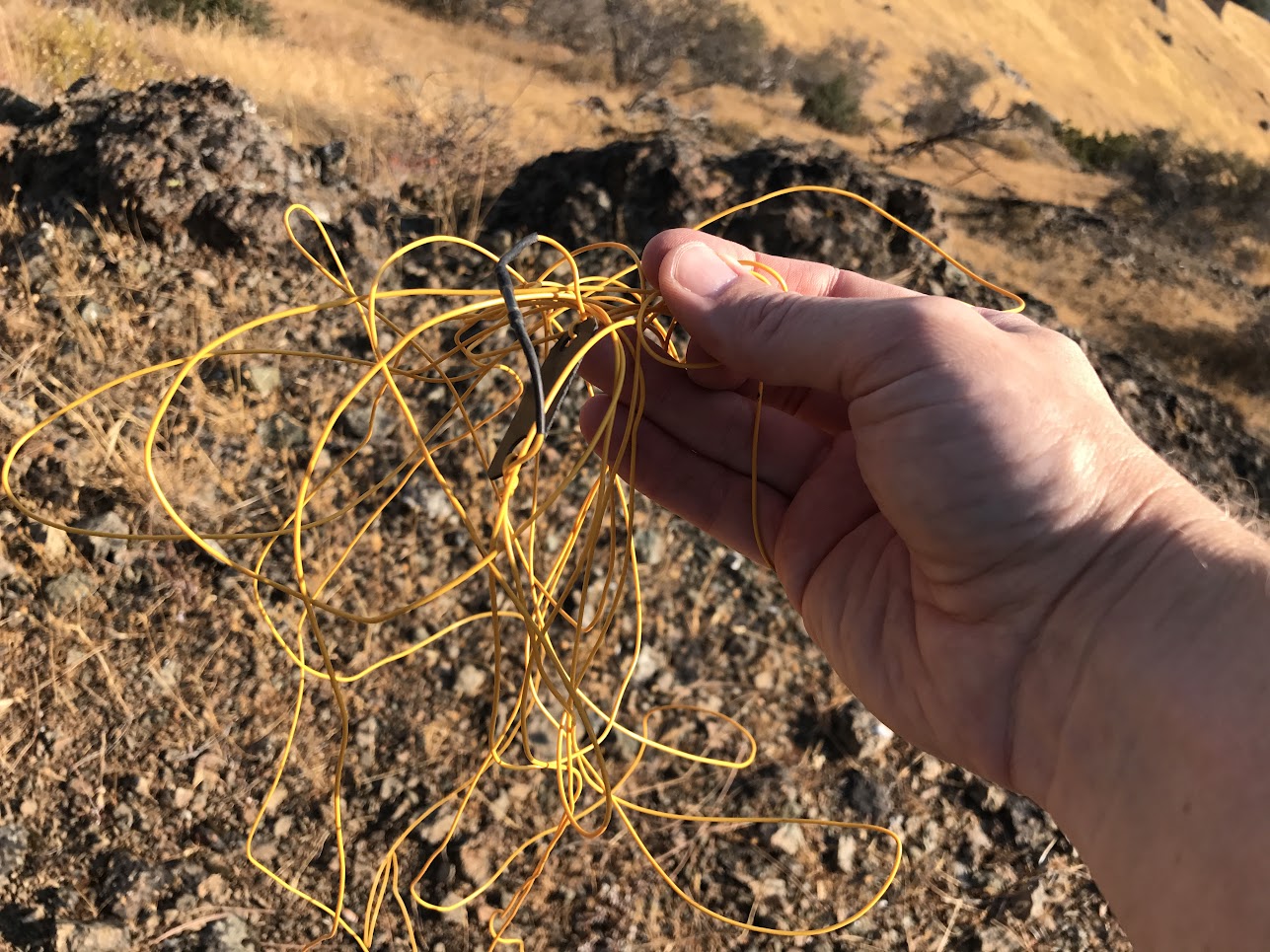 It took me a good 15-20 minutes to get the wire untangled and get it hooked up. All the while cursing and thinking about whether I’d still have time to do the Mount Diablo activation.  I tried to take deep breaths and calm myself, as I patiently detangled it all.

Once I got it hooked up, I found a clear frequency on 40 meters, tuned, spotted myself and started making contacts. 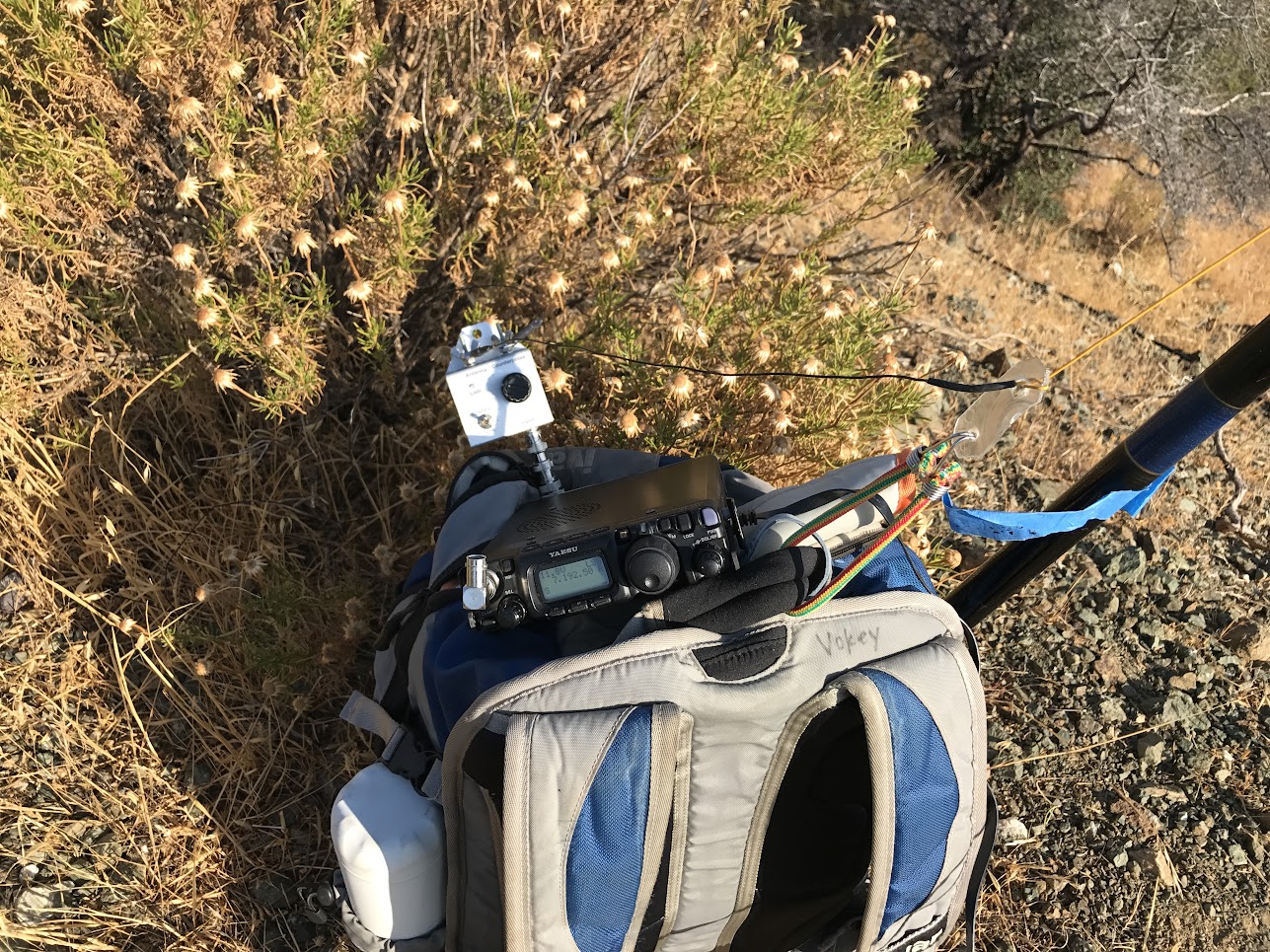 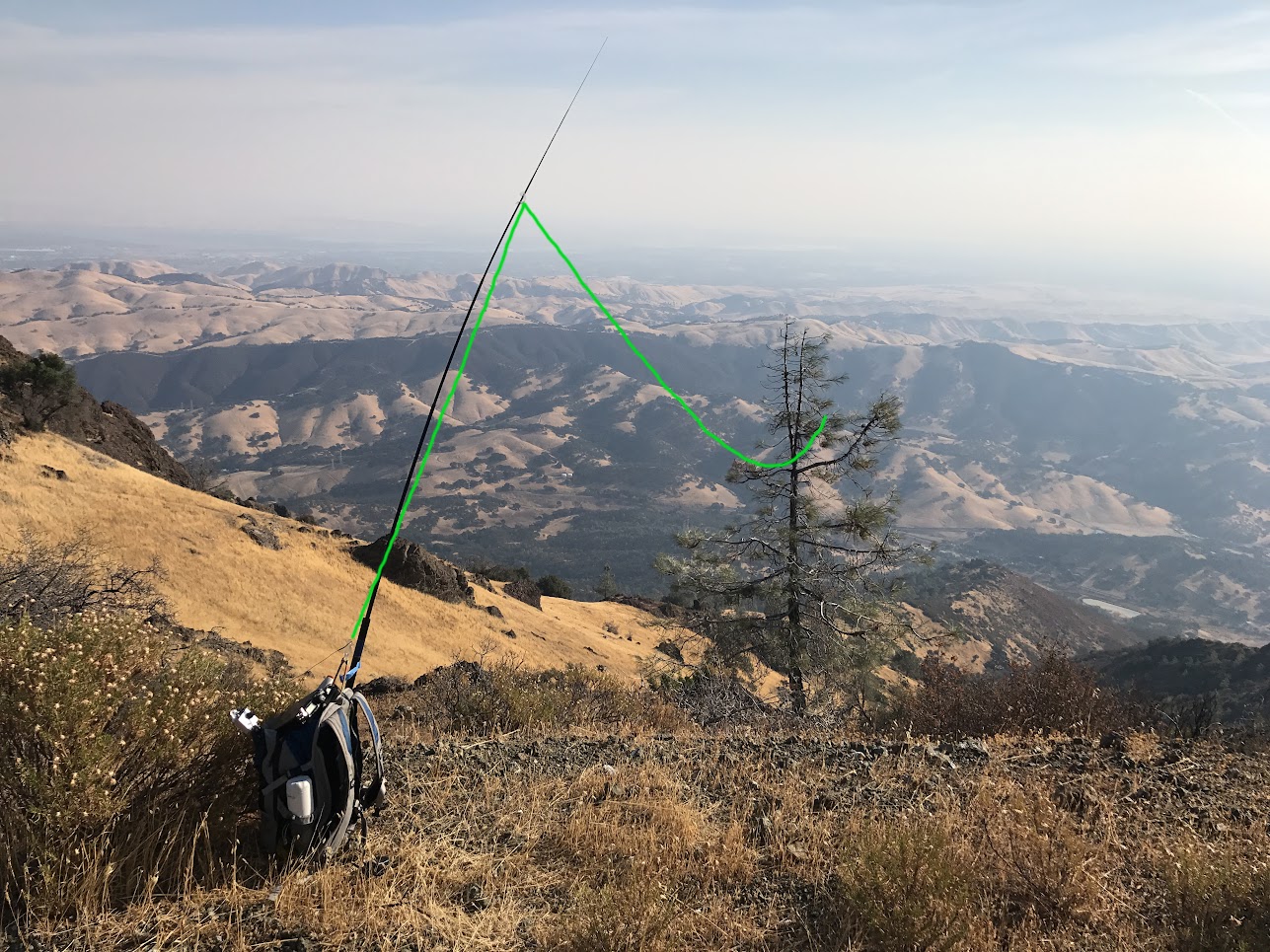 Things were easy at this point.  I made a few contacts on 40 meters, then took a break from HF and called CQ on 146.52.  I had a couple of QSOs there, then went back to HF – 20 meters. The first person to come back to me was a VE2 station. I really had to work to try and get the signal report through, and, having accomplished that, I still hadn’t managed to get him to repeat his callsign. Finally, after repeated tries, we got the full exchange and I got him in the log.  Exciting!  I got a few more contacts on 20 meters, then quickly packed up to head over to Mount Diablo.

The hike to Mount Diablo

Going back down to the saddle, the descent is a bit tricky down the steep part, but then it’s all easy. I don’t normally like seeing graffiti in the wilderness (though I wouldn’t call this wilderness), but there was a particularly creative “Obey” face painted on a steel drum next to this building near the summit. 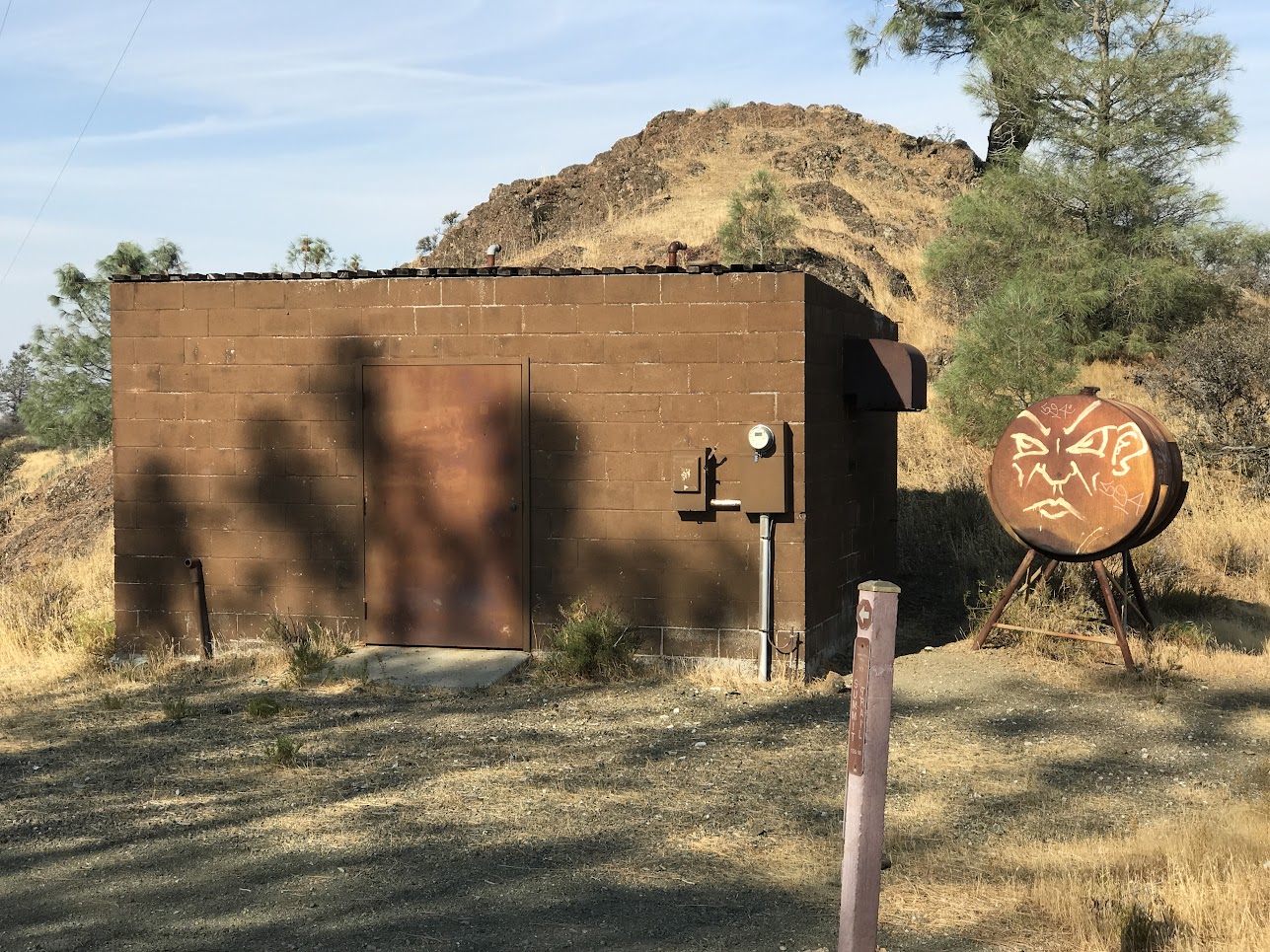 Descending towards the saddle, I could clearly see the building on top of Mount Diablo, as well as the ridge I’d be climbing. 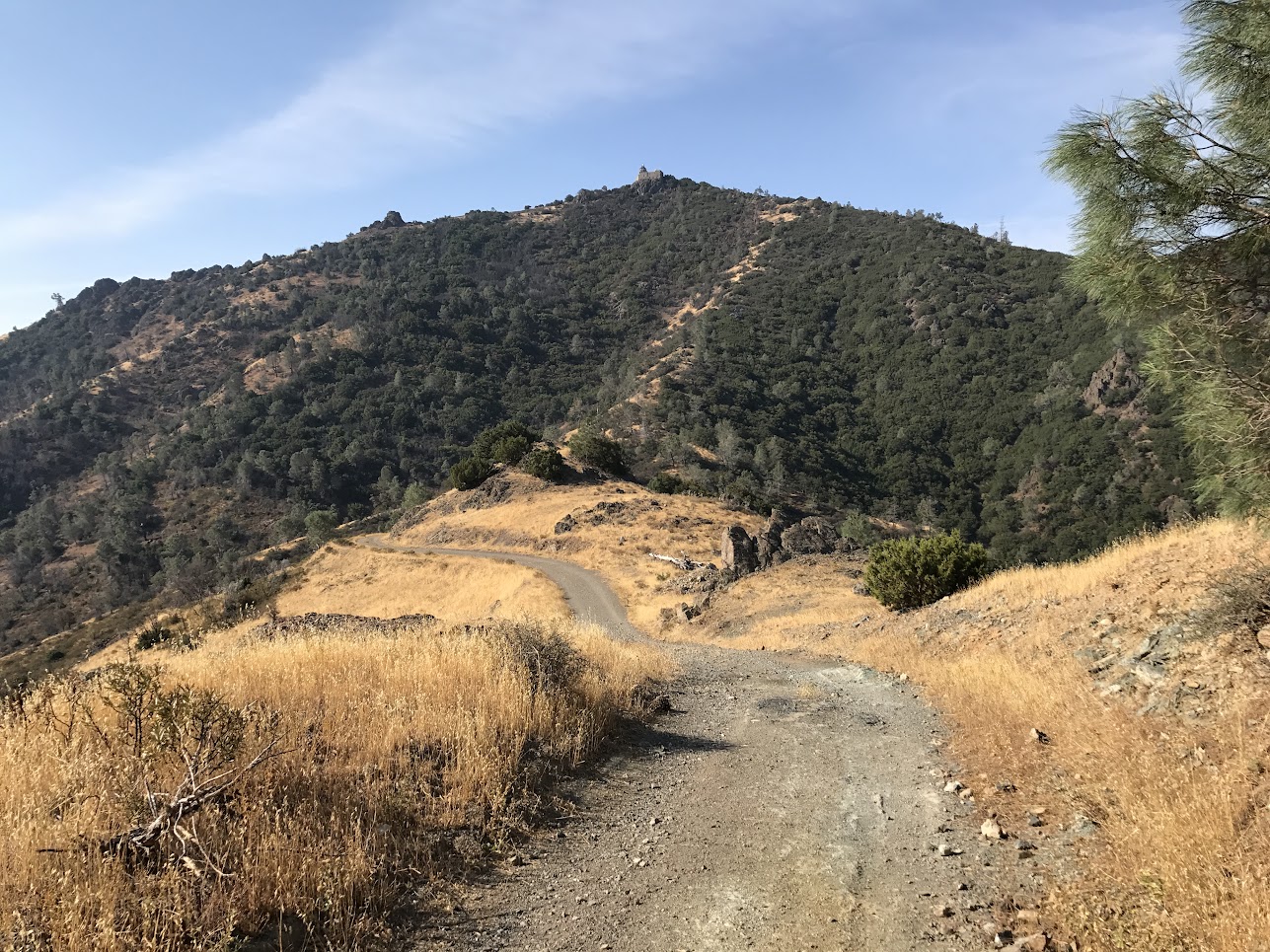 Heading down, so I can go up

Getting to the saddle, I went straight up the ridge, rather than turn left to get on the North Peak trail back to my car. I was hiking fast up to this point, since I thought I might still have a chance of activating Mount Diablo. 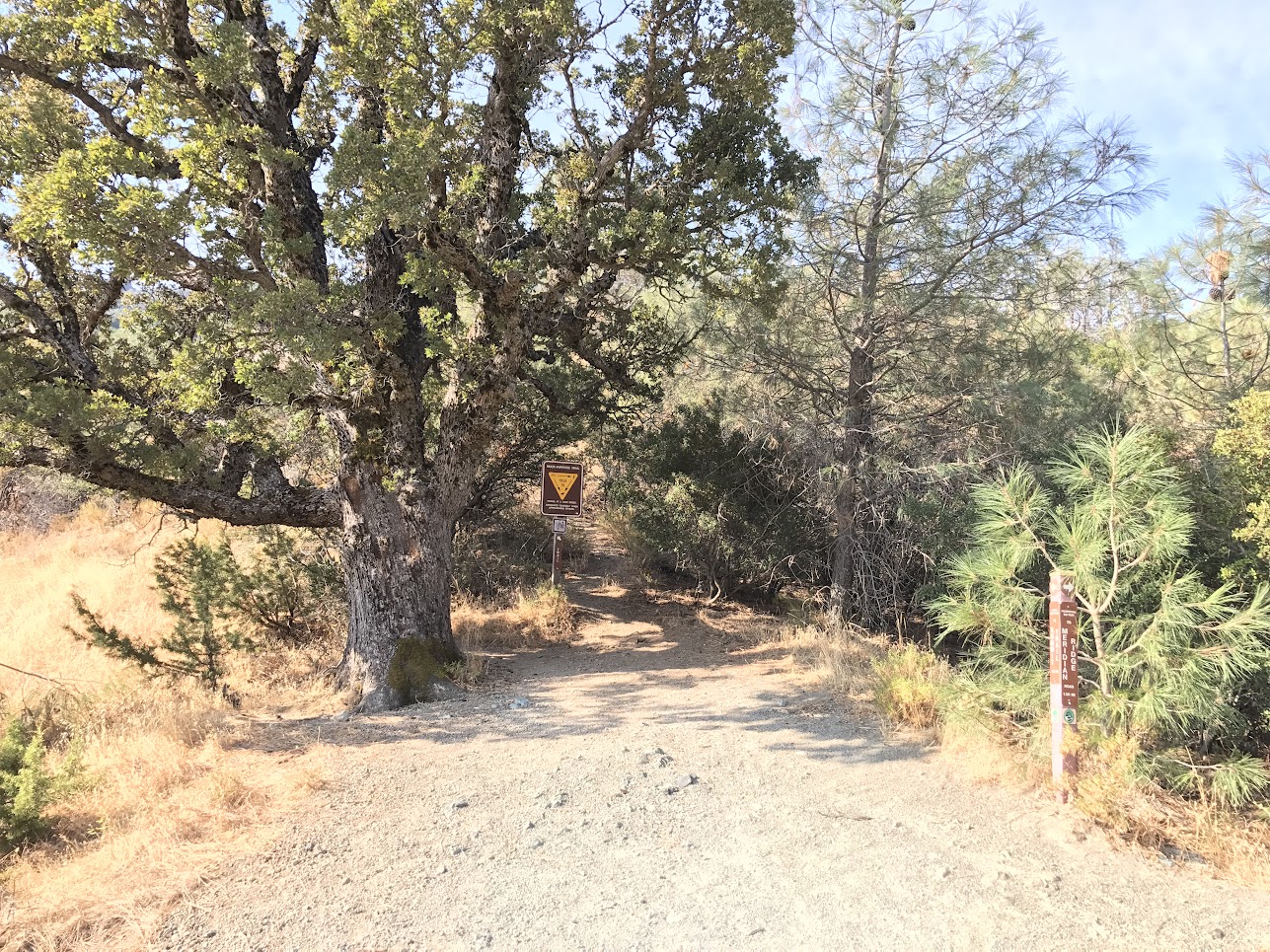 Maybe this trail has a name. I call it “Ridge Trail.”

Hiking up this ridge was unpleasantly steep. Each step up was quite an effort. There was even one little mini-scramble section. As hard as it was, I kept moving, hoping at this point to have enough time to do a VHF-only activation. I had come to grips with the fact that I wouldn’t have enough time to do HF. I had to be back home by 1200, and it was looking like I’d get to the summit of Mount Diablo by about 1015-1030.  I ended up arriving at the top around 1015. As I approached the top, I chose a clear VHF FM simplex frequency and sent out a spot for it.  I figured I’d try the calling frequency if I didn’t get responses on my chosen frequency. 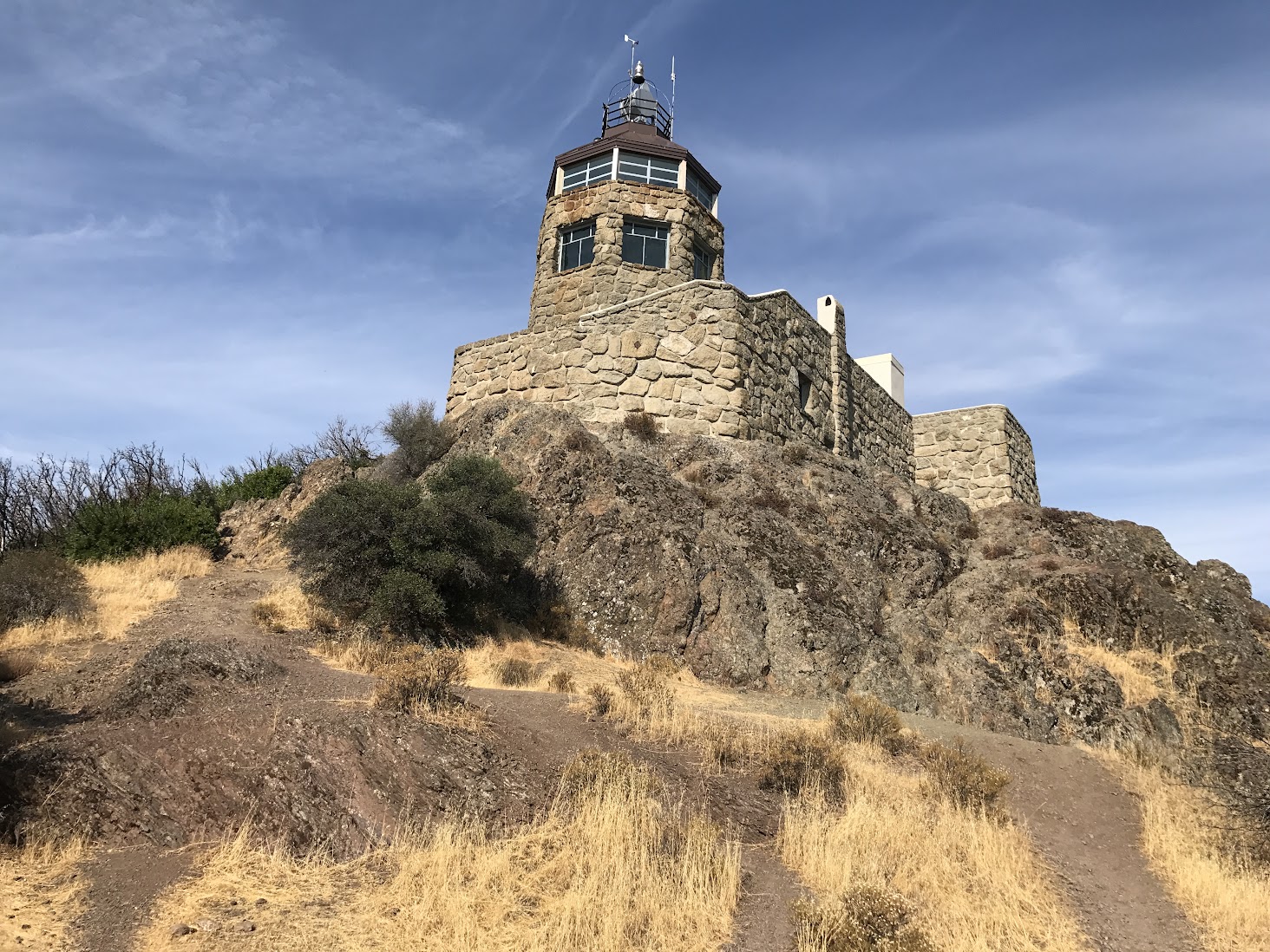 Arriving at the top

It’s always strange arriving at a tourist spot (with parking lots) as a hiker. Approaching from the east, I came across the walkway to the observation platform, with its metal railings.  It felt slightly awkward, hopping the railing to get onto the walkway.  Wasting no time, I went straight up to the observation deck. 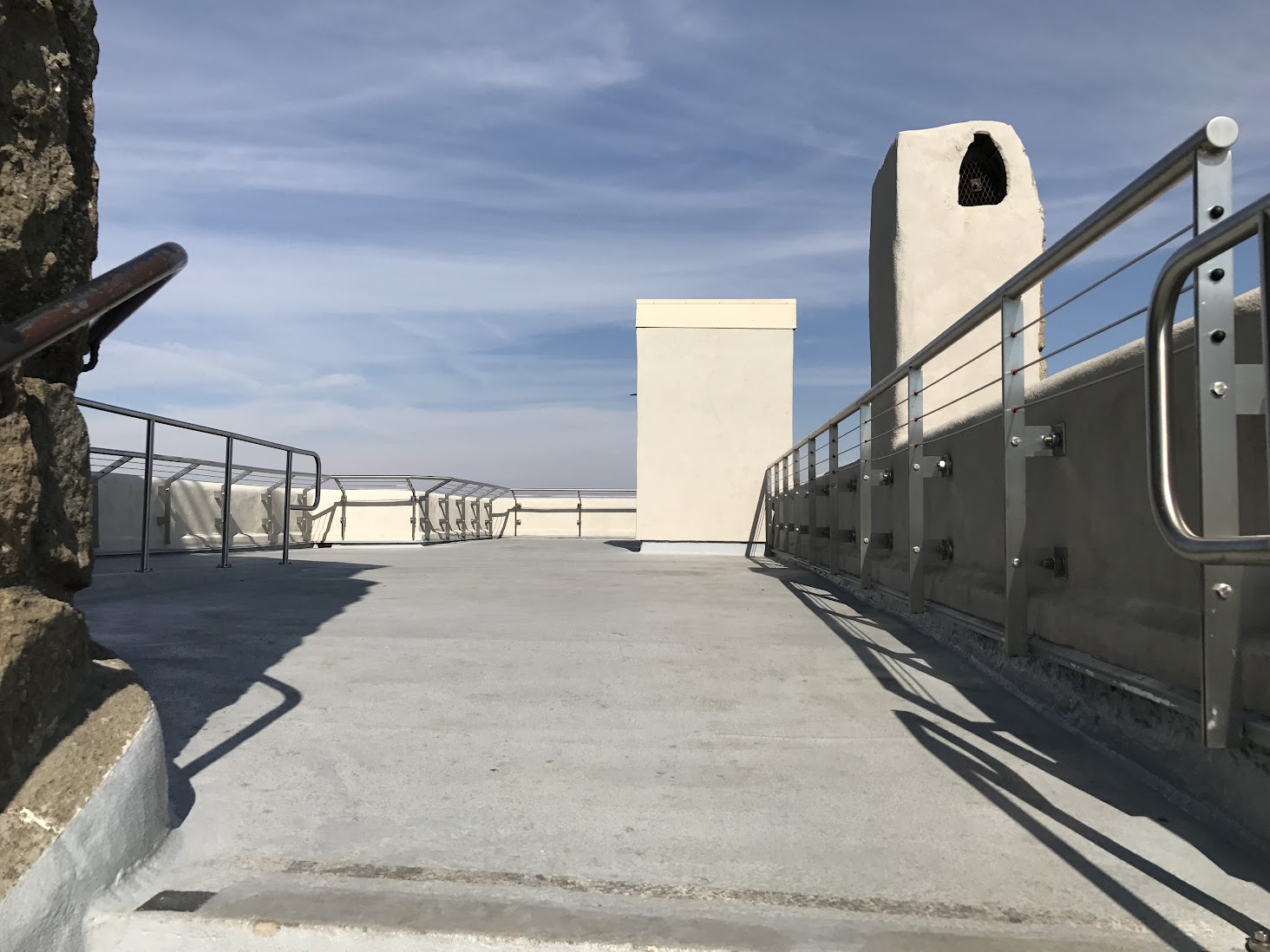 When I got up there, the deck was empty. I went over to the far end of it and looked at the drop-off on the east side of the building. This would be an excellent place to throw a wire—there are no trails beneath, and the top of the wall is big enough to rest a radio on.  Even considering this, I still figured I didn’t have enough time to operate HF, so I focused on VHF with my little Yaesu VX-2R radio.  I didn’t get any responses on my chosen simplex frequency, so I moved to the 146.52 calling frequency. I spotted myself there, and quickly started making contacts.  A few challenges then quickly entered in.

Depending on where I stood, my radio’s receiver was getting de-sensed (as far as I could tell) and I had trouble hearing stations from one second to the next.  There was some doubling going on, too—and not the kind where you can pick out one of the callsigns. It was the kind where you can’t make out anything.  Also, as soon as chasers started answering me on the radio, a rowdy crew of people arrived to look around, take pictures of their amazing accomplishment, etc. I kept walking away from them, and weirdly, they seemed to keep congregating around me and shouting. So, I apologize to those I made contact with, if my operating seemed sloppy. I really had some challenges!

Well, with 6 contacts in the log and still enough time to make it back to the car and get home on time, I took my leave. I’ll have to come back to Mount Diablo sometime, and look around a little bit more.