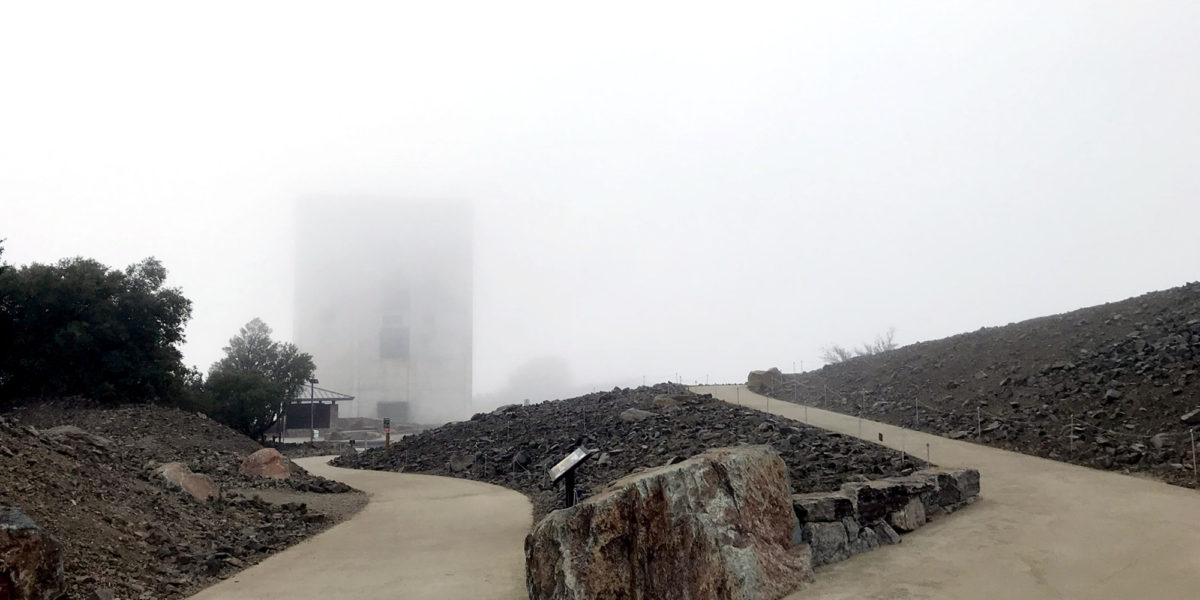 Ever since moving to the SF Bay Area, I’ve wanted to explore this summit. When I first moved here about 10 years ago, I wondered what the big “cube” was on top of the mountain. After finding out what it was, and that it was closed to the public, I really wanted to go there. Having patiently waited years, the time finally came—it opened to the public on September 18th, 2017.

Mount Umunhum is so named by the local Ohlone Native American tribe, meaning “resting place of the hummingbird.”  I didn’t see any hummingbirds while there, but I’m sure they’re out and about when the weather is nicer.

Once I found out when it would be opening to the public, I marked the date on my calendar, and made plans to drive up there early in the morning, before work. I didn’t want to go on opening day, since I figured there’d be crowds.  I planned to go a couple of days later.  A couple of other SOTA operators (AB6SO and AA0BV) went the day before me, so I was able to get some info on gate-opening times, etc. Thanks Joe!

Normally, I’d plan on doing a drive-up summit as a hike or run, if possible. Since I had limited time to do this before work, I did the drive-up version this time.

The official hours for the summit are “dawn to a half-hour after sunset.” I’d heard from Joe AA0BV that the gate had opened at 0700 for him.  So I planned on being at the gate a little bit before 0700.  The drive up Hicks Road was uneventful, and I arrived at the gate (Mount Umunhum Road) with about 10 minutes to spare.  Now, the first thing I noted is that there’s really no place to park and wait for the gate to open.  However, the gate across the road from the summit gate said it opens at 0800, so I parked in front of it and waited, while chatting with another person waiting to head up there.  On my way up, it was looking like the summit might be in the clouds. At the entrance gate, this still looked to be the case, but we were still low enough to get some sun as it came up. Early morning light hitting the clouds at the entrance gate

I thought a ranger might come by to open the gates, but right at 0700, I heard a click and they swung open on their own.

The entire road up to Mount Umunhum has been repaved as part of the project to open the mountain. It’s definitely one of the nicest winding roads I’ve driven in a while.  Within a few minutes, I was in the clouds. A pleasant drive up into the clouds

About 15 minutes after the gate opened, I was in the summit’s parking lot.  Knowing the summit is just a little bit above the lot, I first drove up to the summit to get a preview, then back down to the lot to park. There were two other cars there—one that looked like it had been there overnight, and another belonging to the person that had driven up right before me.  Pretty cool, having even a drive-up summit almost entirely to oneself. 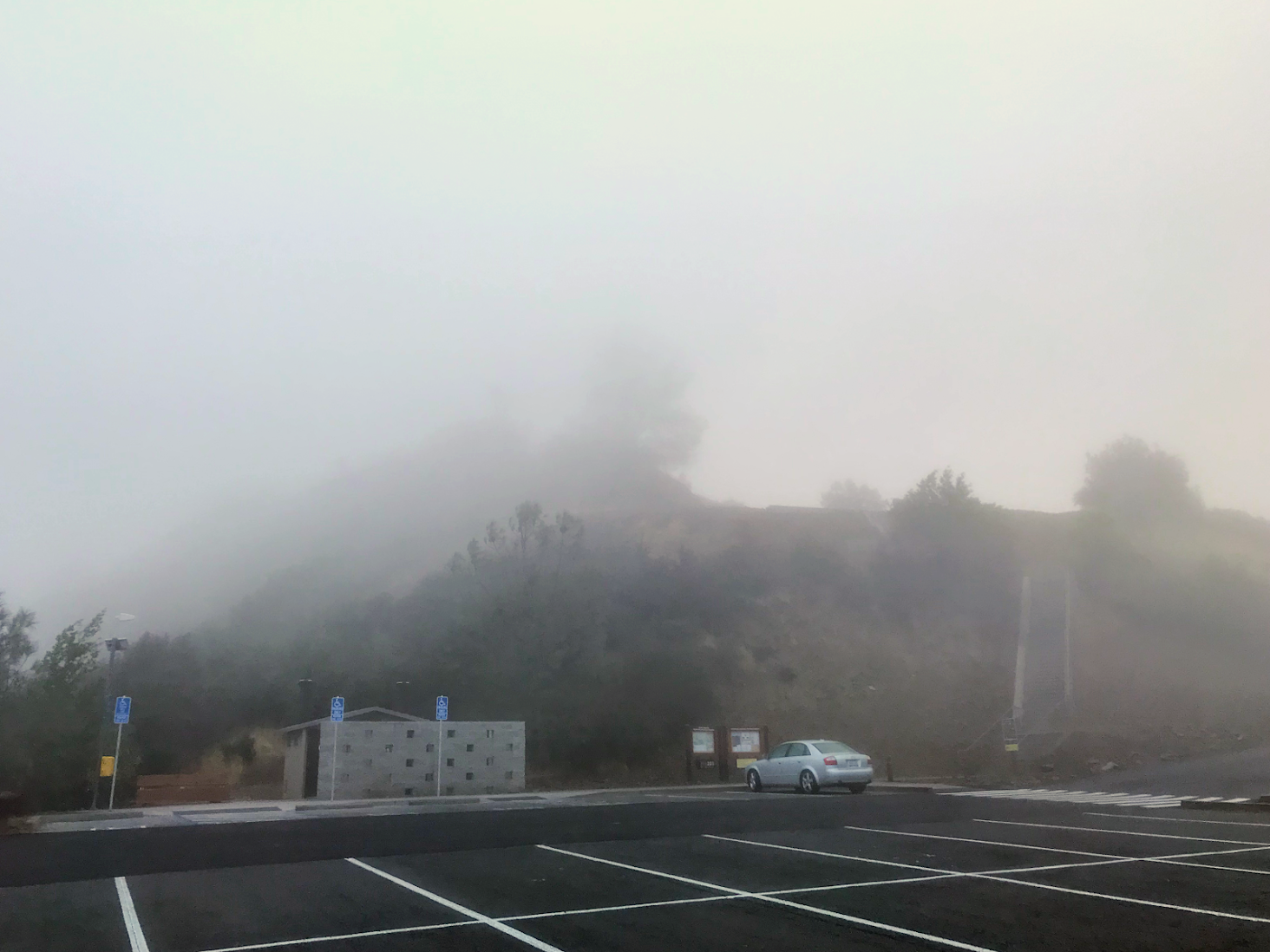 In the summit parking lot, looking toward the summit

It should be noted, for those who cannot climb the stairs to the summit, there are a few disabled parking spots right on the summit, along with a drop-off area.  I grabbed my radio bag and headed over to the stairs.  They start out with a nice bench and some informational signs at the bottom.

Bottom of the stairs to the summit

After climbing 159 steps (I think that’s what the sign said), you’re on the summit plateau. There are several informational signs, with accessible walkways leading to the various areas.  Some of the walkways seem to be either water-permeable concrete, or really densely-packed sand/rocks.  Either way, they blend in with the surroundings nicely, and probably lets water flow right through — good for traction and other things. I did some looking around, for the fun of it, but also to see where I might be able to set up a wire antenna for HF.  Experiencing the wind, cold and drizzle for a few minutes was enough to convince me that this might be a VHF/UHF-only activation.  I snapped a photo of myself by “The Cube” and spotted myself with the SOTA Goat app. 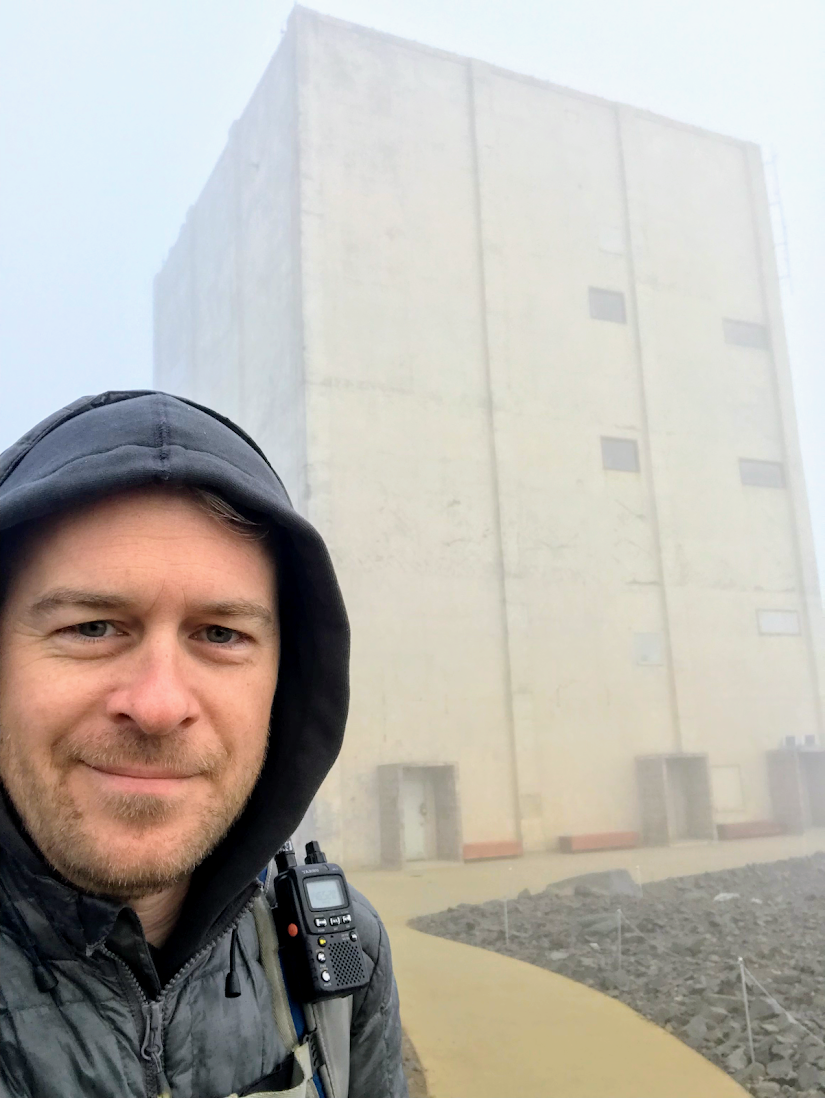 Typically, a little wind, cold and drizzle wouldn’t keep me from setting everything up and just operating HF. But the Bay Area has lots of hams, and Mount Umunhum has an excellent radio “view” of the Bay Area, even if I couldn’t see it because of the fog.  Also, while I had a jacket, I hadn’t come fully prepared for the cold. Next time, I’ll bring a rain jacket and gloves!

Well, I ended up just working stations with the little 1-1.5w handheld radio and its 12.5″ whip the whole time! Some people were pretty close, in the San Jose area, with others up north near Oakland.  I was getting pretty wet and couldn’t feel my fingers, but my lightweight down jacket kept me warm enough.  I stayed in the summit shelter area pretty much the whole time, to try to stay out of the wind. It was good fun! 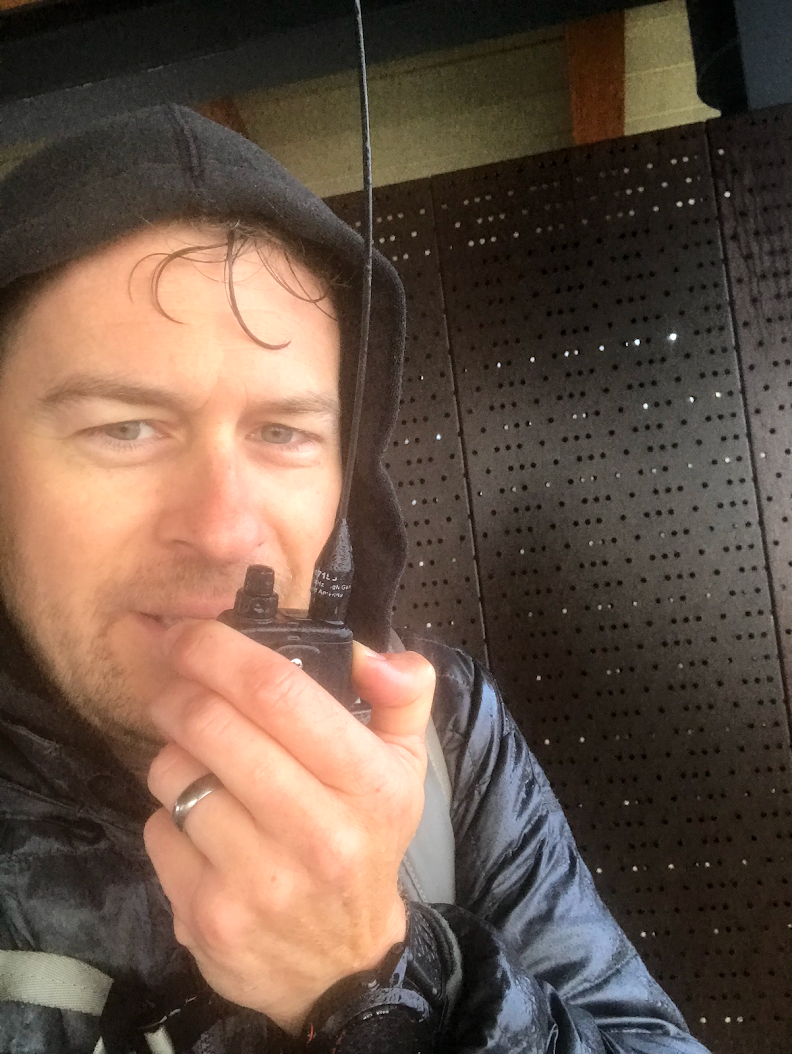 I noticed there were massive metal panels in the shelter structure, but they didn’t seem to be an issue—if anything, they may have helped. All the stations I contacted were opposite the direction of the metal panels.

I worked 5 stations on VHF, then went to my club’s repeater.  I chatted briefly with Kevin, AB6XS (sorry we couldn’t get you in the log, Kevin!) and Dave, WB6KHP.  Dave came over to 146.52 to get in the log, and also 446.00, where I got a couple more QSO’s from a couple of the same people I’d contacted on VHF. With 6 QSO’s on VHF and 3 on UHF, I packed it up and headed back to the car.  I briefly chatted on the N6NFI repeater before driving back down.

I’m going to have to come back here when the weather is nicer, and see what the views look like!