Ever since hearing about Mount Washington as a kid, I’ve wanted to go to the top. My father would tell stories of driving to the top, and having the brakes smoking on the way down. Decades later, as an avid hiker and SOTA enthusiast living on the west coast of the United States, it still called to me, but it was over 2600 miles (4184km) away. So when plans for a New England family reunion started coming together for this August, I knew the chance had come.

We’d be staying at a large chalet in New Hampshire, about an hour away from Mount Washington. In advance of our visit, I discussed plans with my older sister, who’d been to the top several times and hiked it twice.  We decided to hike up from the less popular (and less crowded) west side.  I’d be hiking with my older sister, one of my younger sisters, and my wife.

Much discussion was had about which day to do the climb, and we landed on Friday, one day after arriving at the chalet. I still hadn’t adjusted to east-coast time (three hours ahead of west coast) and we had a thunderstorm pass directly over us that night, so I was a bit bleary-eyed when I got up at 5am.

There are probably other options, but we went with the obvious choice of the trailhead parking area below the cog railroad station, about a half mile west on Base Station Road. With a stop at Dunkin’ Donuts on the way, we arrived at the trailhead around 7am, paid for parking, and got going right away. 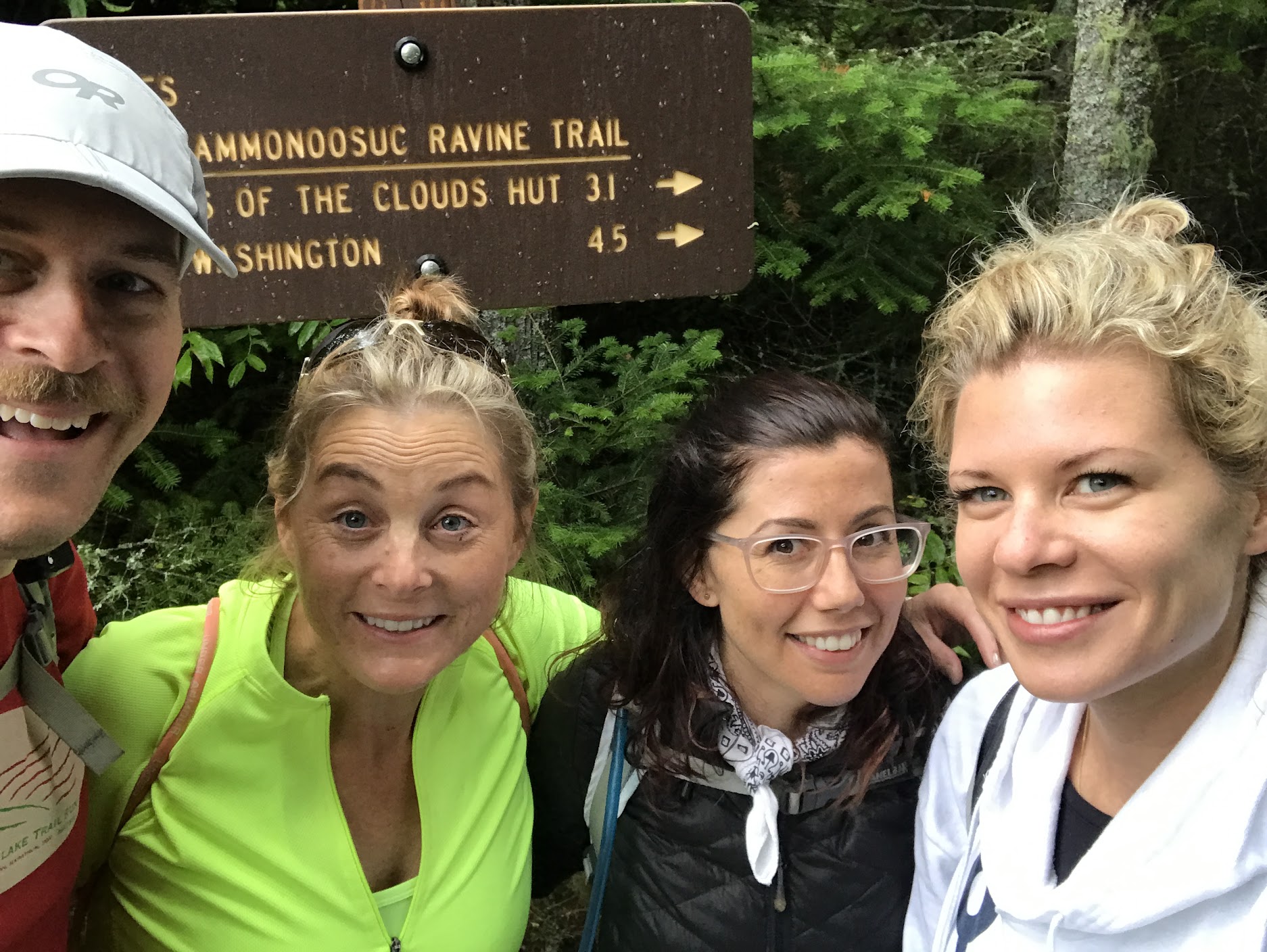 The trail started out pretty gently, which was quite pleasant, but made me nervous about future elevation gain, knowing we had to gain around 4000 feet! No matter—might as well enjoy the beautiful trail while it’s easy. Right away, there’s a fun little stream crossing, across Franklin Brook. 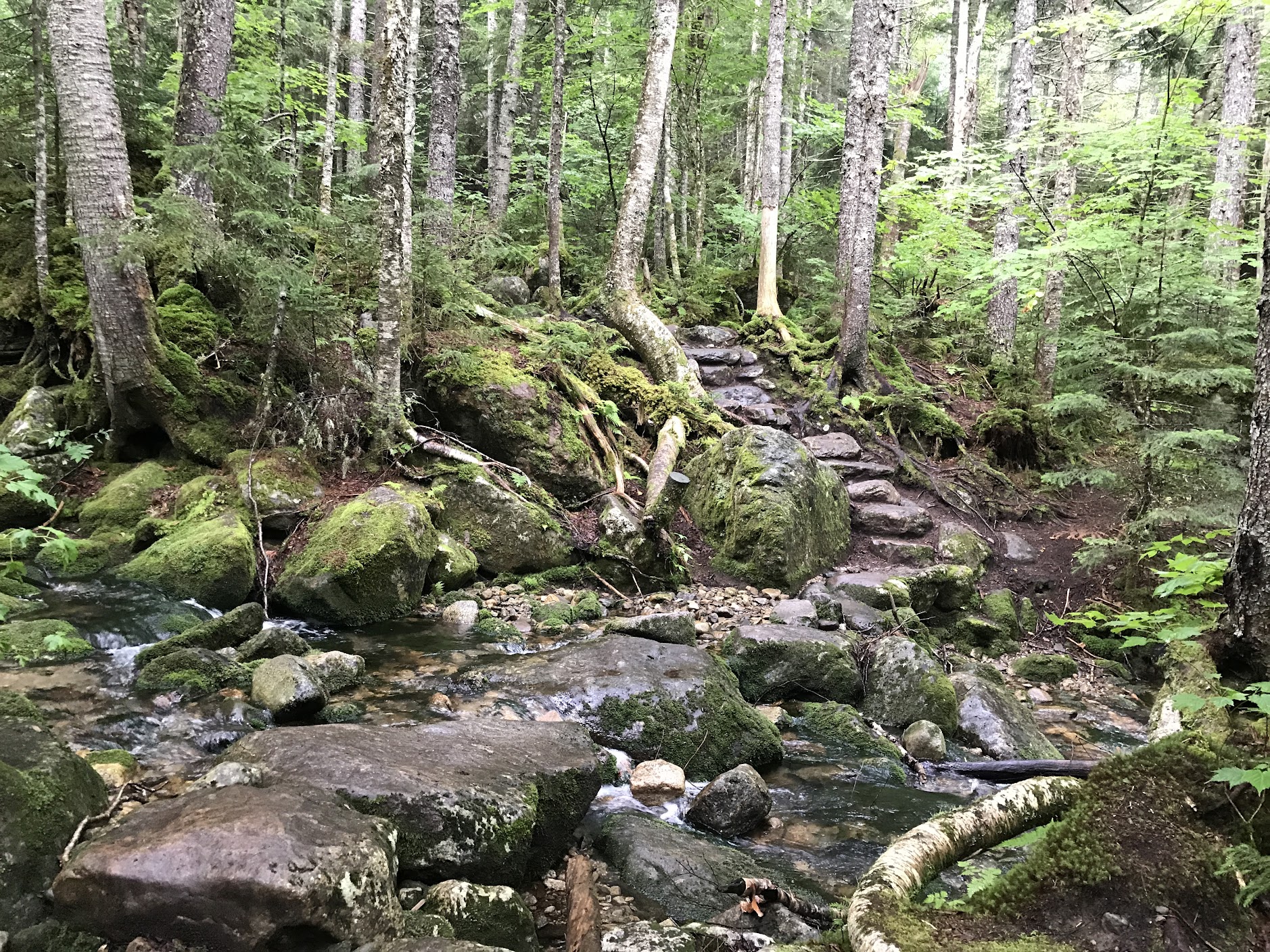 After about a mile, the trail starts climbing. And once it starts climbing, it doesn’t really let up until the Lakes of the Clouds Hut, about 1200 vertical feet (366m) below the Mount Washington summit.  The trail climbs over 1000 vertical feet per mile (222m/km), with lots of very steep sections. It’s a really rugged, but fun trail! 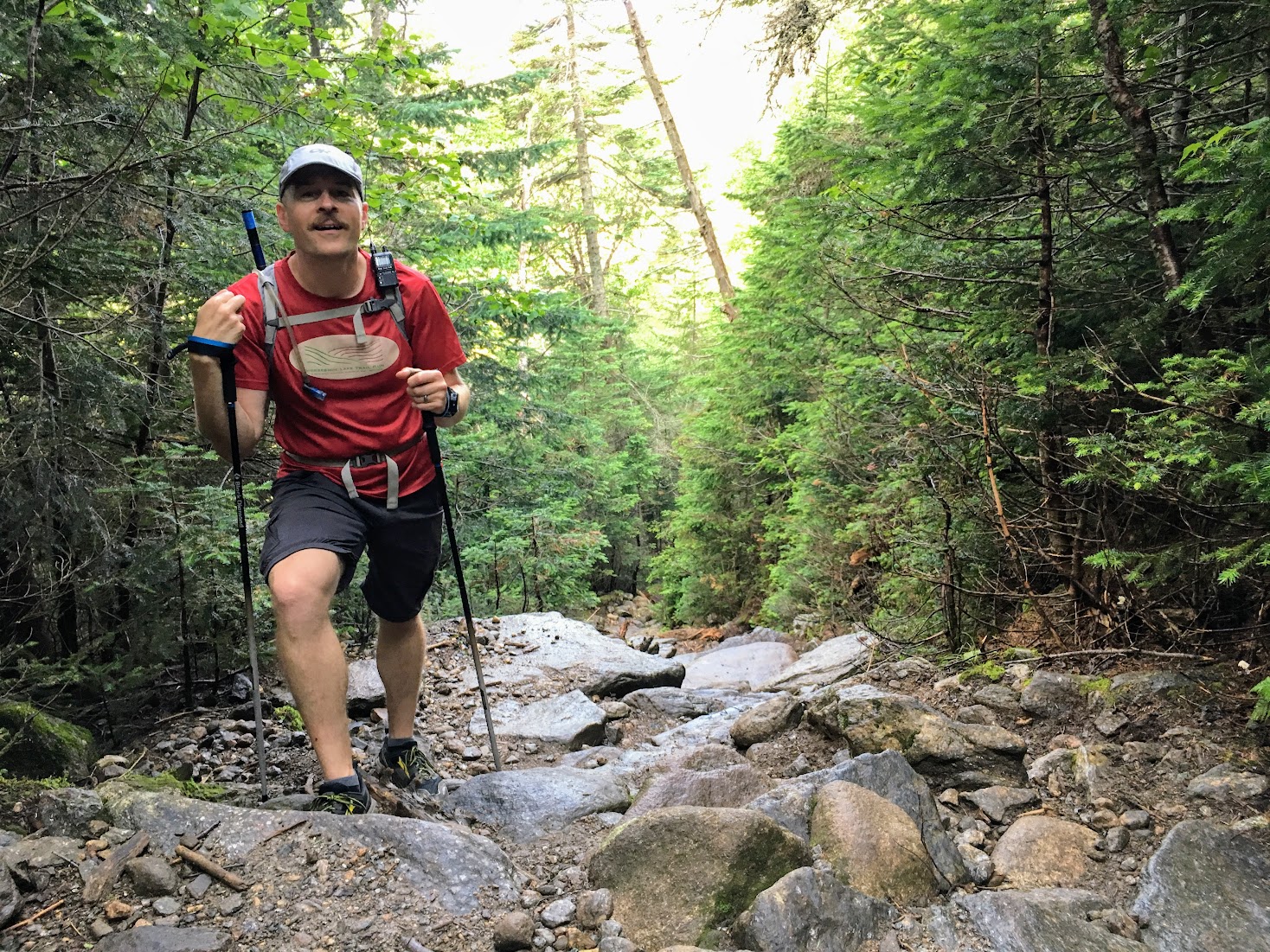 Rex KE6MT (photo by my wife)

There were several sections where using my hiking poles became a hinderance, so I folded them up once it got really steep. There’s even one section with a cute little ladder.  You can tell the trail maintainers put a lot of work into the route. 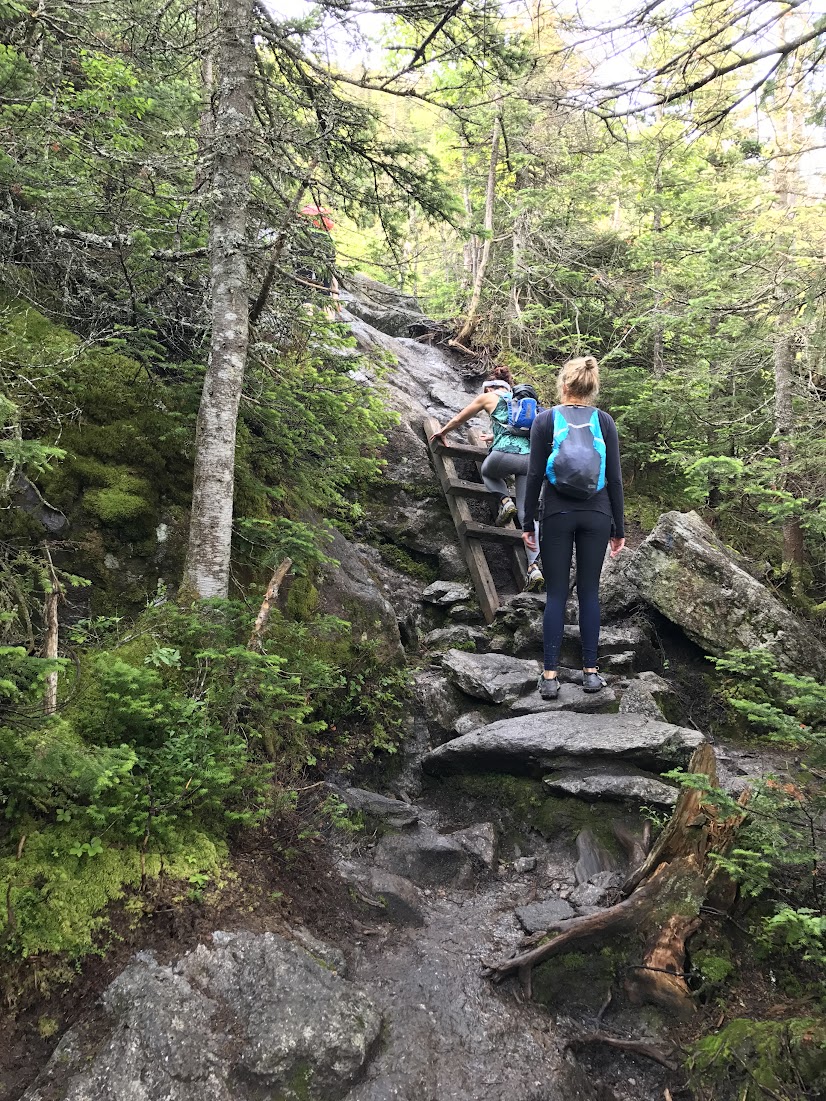 Once the trees start to thin out a bit, the climbing gets slightly less steep, and the views really open up.  The summit also really starts to come into view, with its radio towers clearly visible. 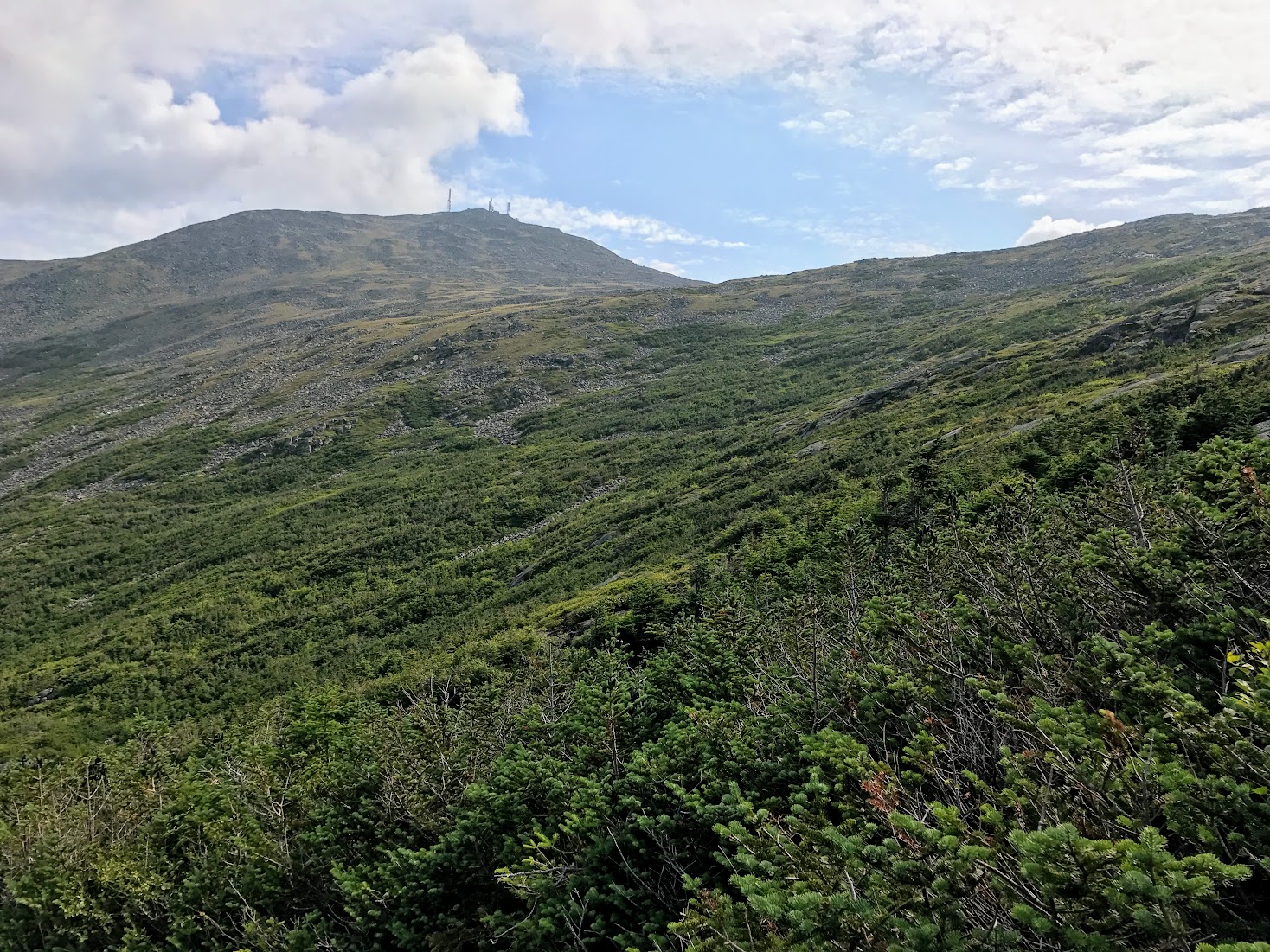 Looking north to the summit

Up to this point, my older sister had been leading the way up at the front of our group, and I had been at the back, to make sure everyone made it up OK.  However, once we got close to the Lakes of the Clouds Hut, I sped ahead of our group, so I could do a little pit-stop at the Hut before we moved on to the summit.  I practically ran up the trail (hard to do with such a steep route) and before long, the Lakes of the Clouds Hut came into sight.  I’d hardly call it a “hut,” in that it’s not small.  But that’s what it’s called! 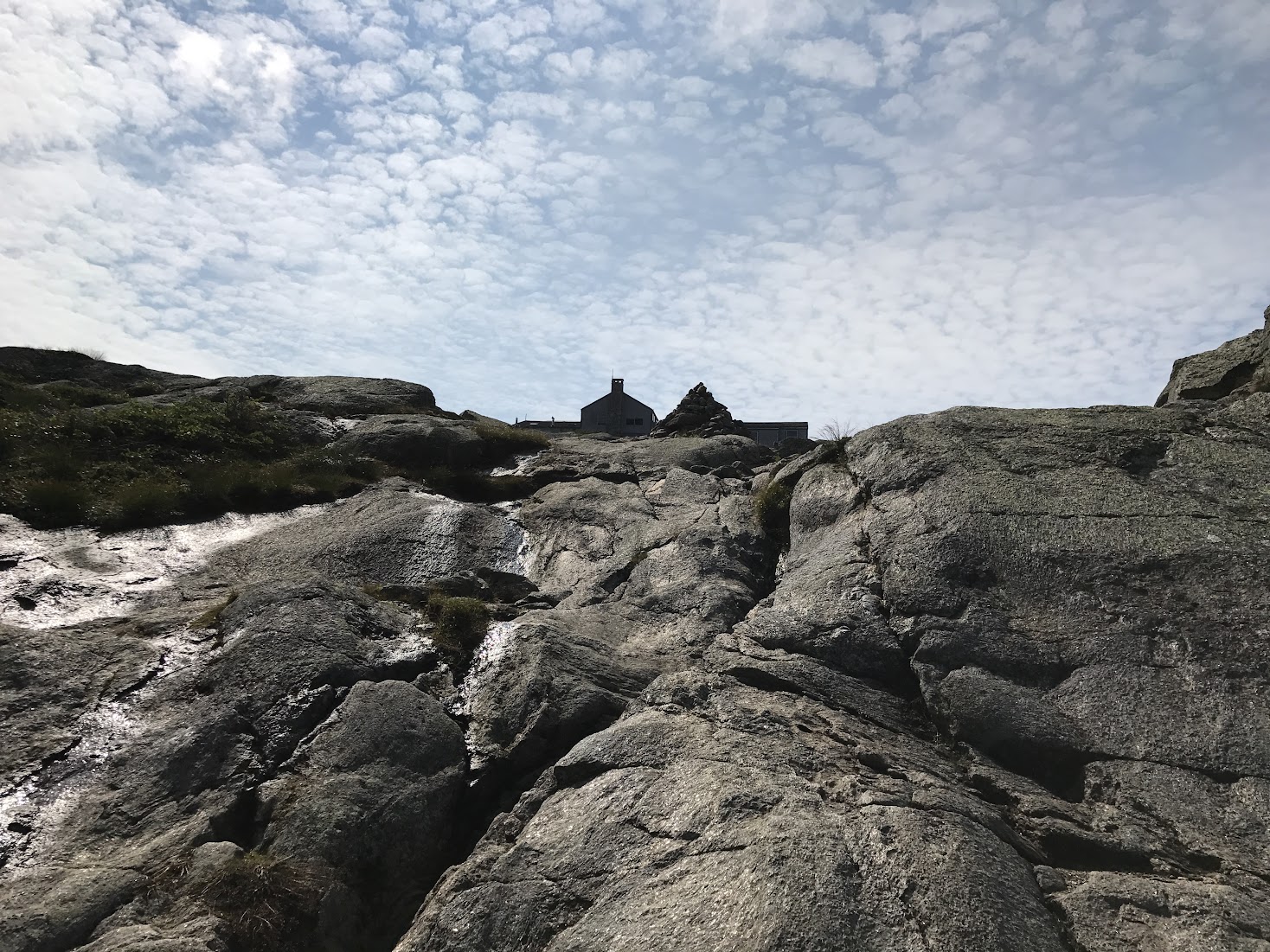 First glimpse of the Lakes of the Clouds Hut

The Lakes of the Clouds Hut is a great little place for people hiking the Appalachian Trail to stay, and I suppose anyone else who’s a member of the Appalachian Mountain Club (AMC).  They have bunks, restrooms, kitchen facilities and friendly people.  It was a really nice little break spot.  I took care of business and waited for the rest of my group to show up, while taking some pictures. 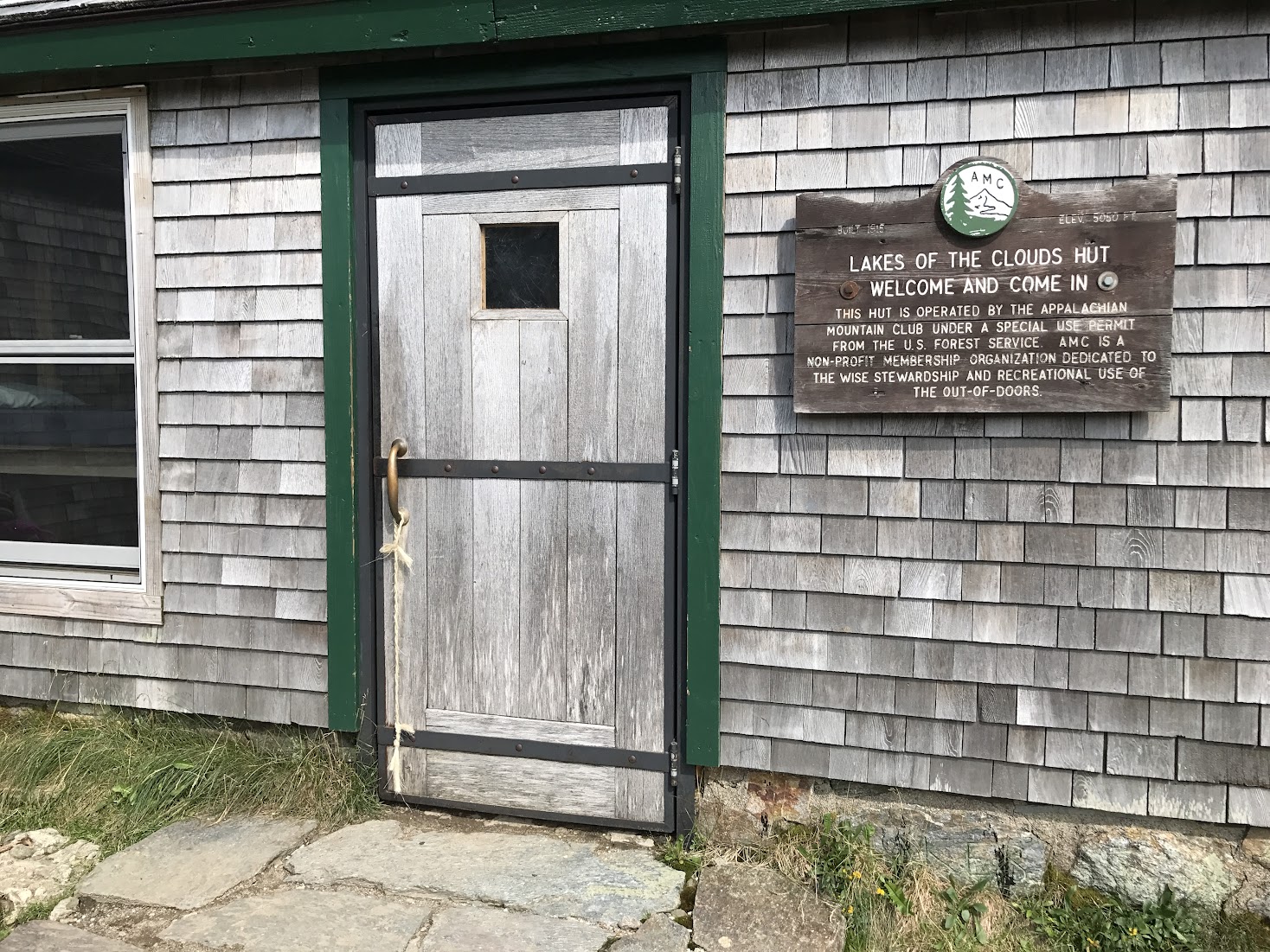 Front door of the Hut 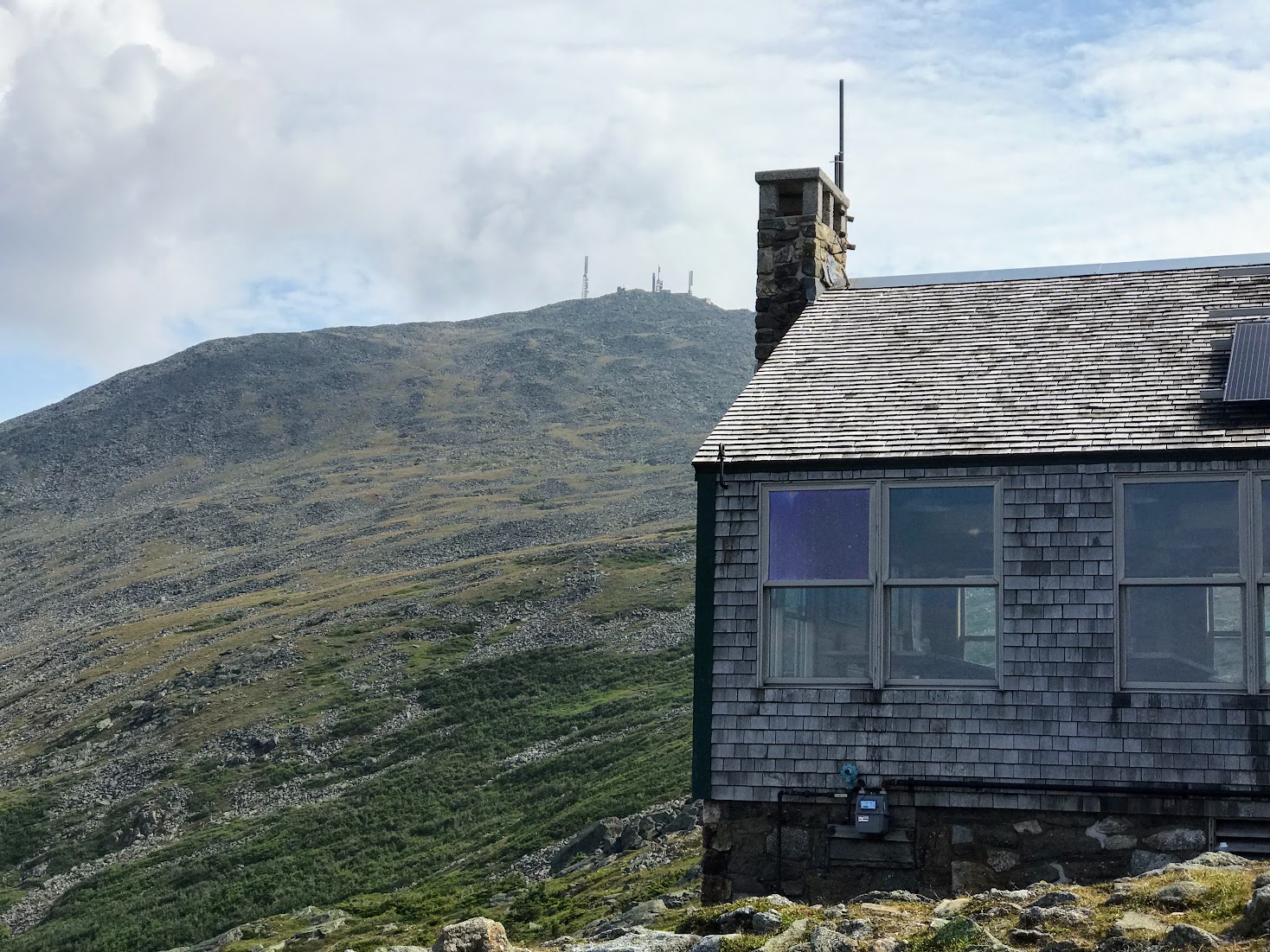 View of the summit from south of the hut

Once my sisters and wife showed up, they had a little break and a snack before we continued on.  We stopped to admire the actual Lakes of the Clouds, where we encountered a lovely sign notifying us of the deadly consequences of bad weather here in the place with some of the worst weather on the planet. 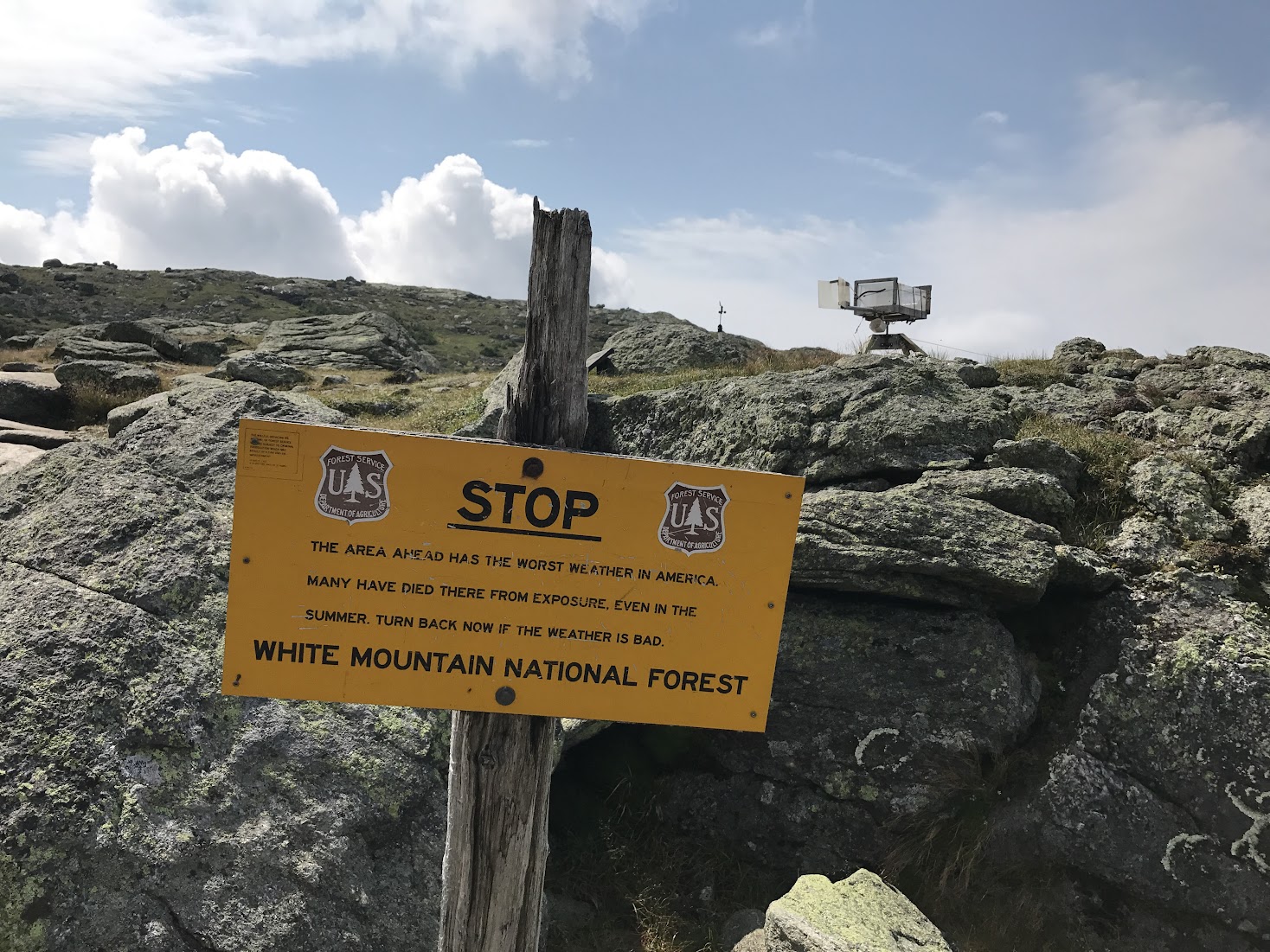 With various towering cumulus clouds forming around us, I definitely kept one eye on the sky, one on the ground.  There weren’t any cumulonimbus clouds forming, but they were a definite possibility (there had been a thunderstorm just hours before we started hiking). 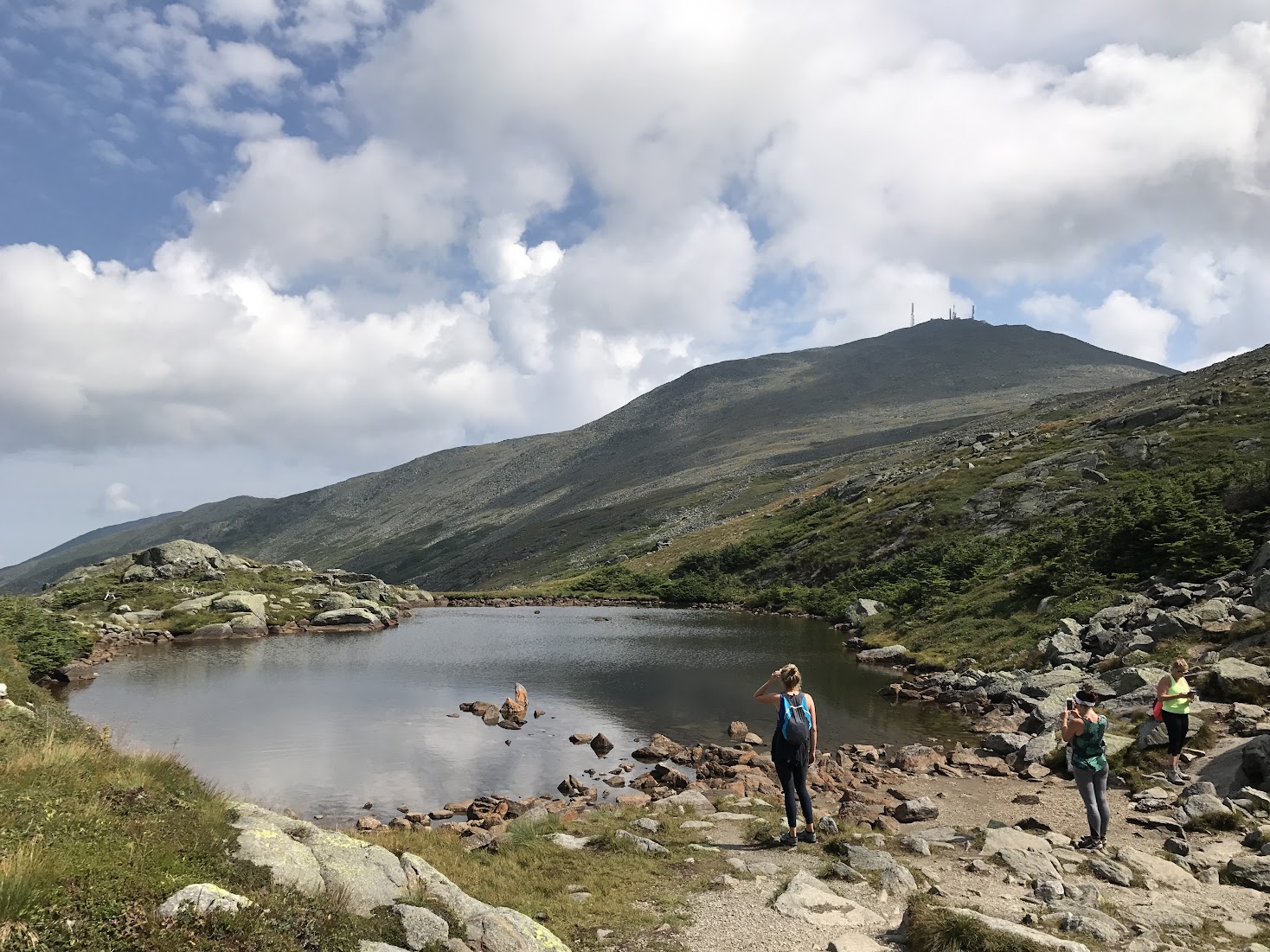 Fair weather at Lakes of the Clouds

Continuing on, with the objective in sight, the remainder of the climb was pretty easy compared to the earlier bits. As we climbed, looking back at the Lakes of the Clouds area, we were rewarded with perhaps the best views of the whole hike. 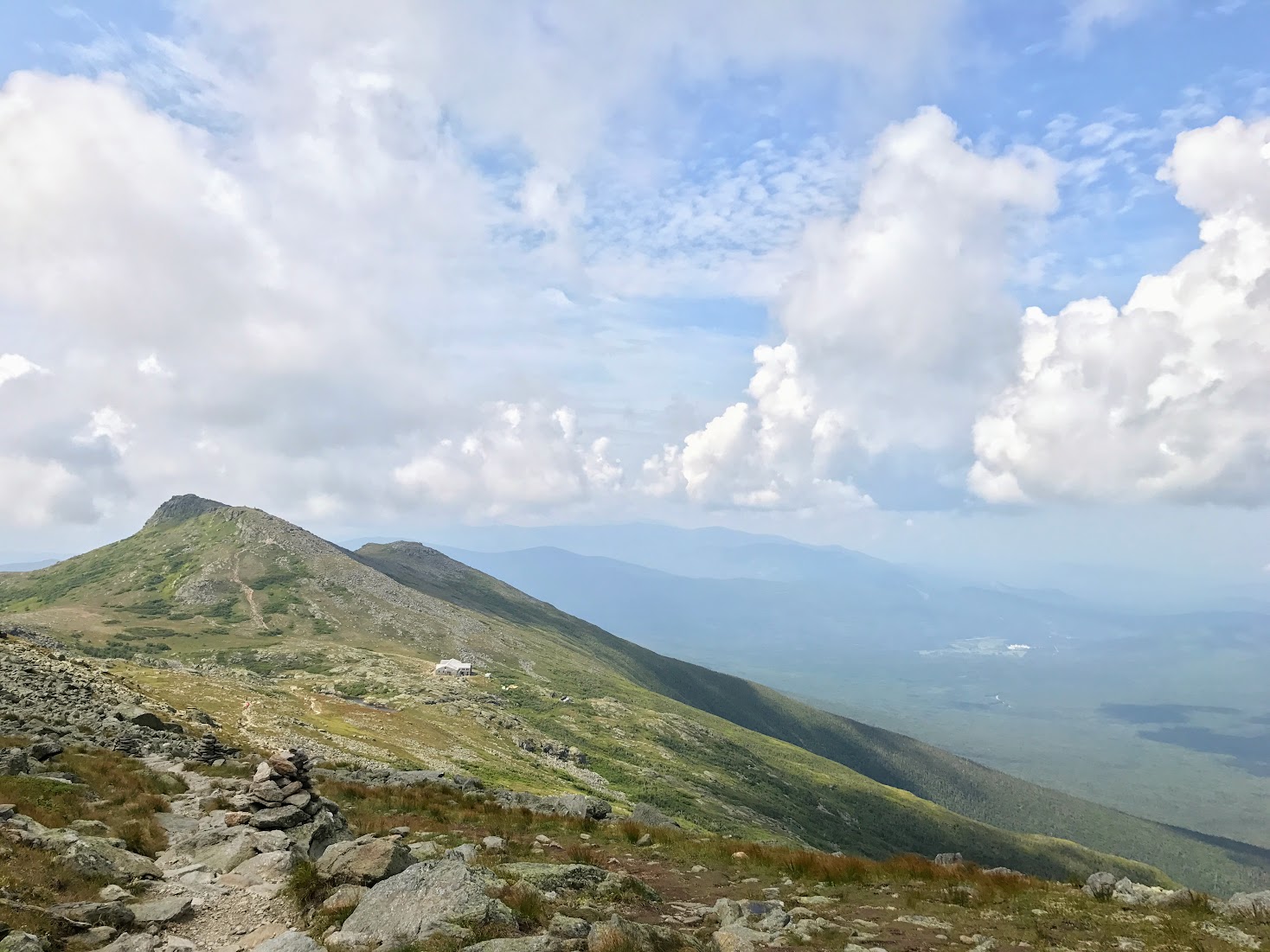 Looking back at the Lakes of the Clouds area

Right around the time we were within 300 vertical feet (90m) of the summit, clouds started to settle around it. And by the time we made it to the very top, it was completely clouded.  But it was great to make it to the top, nonetheless! 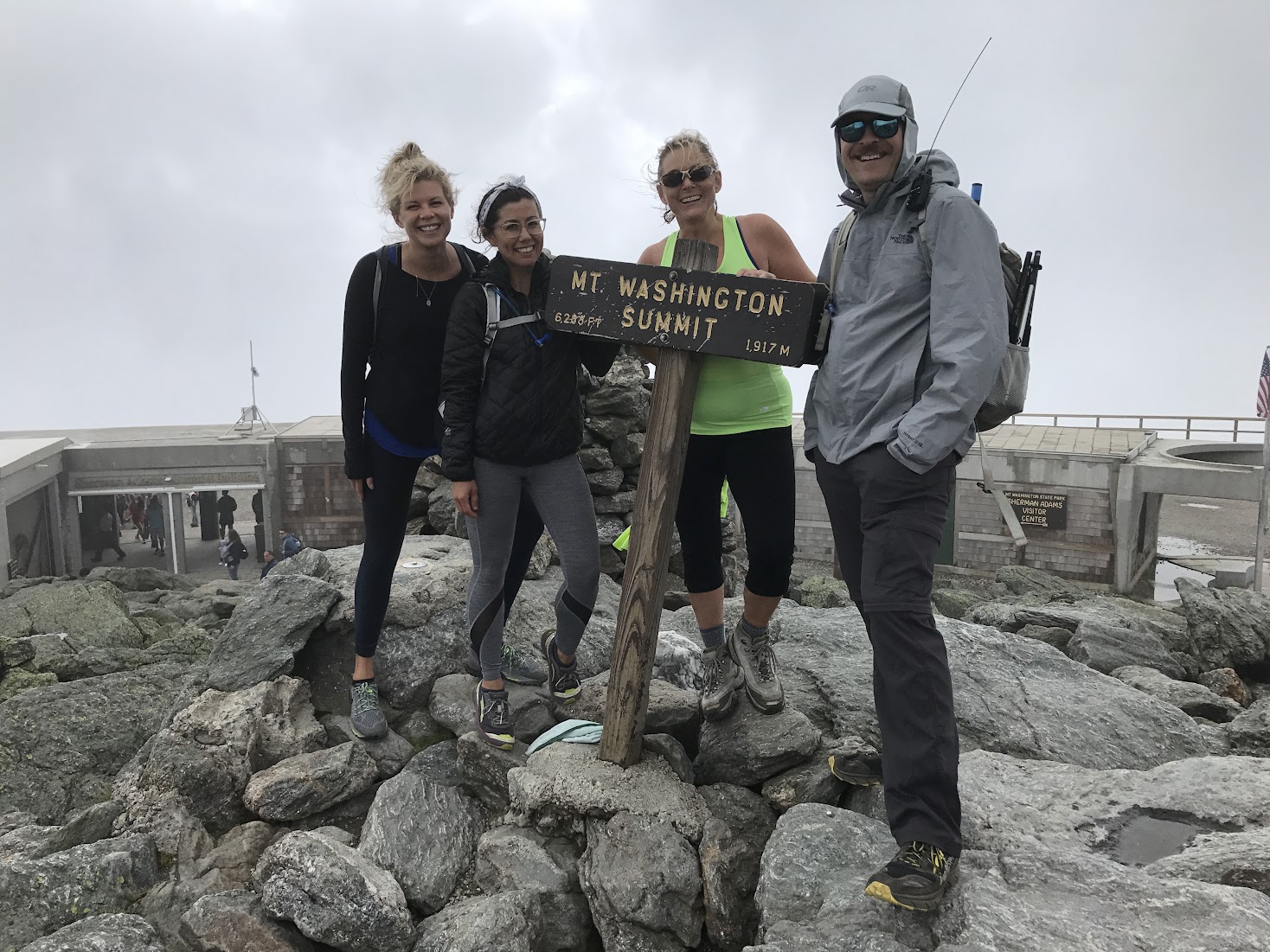 Those of my family that weren’t climbing/hiking that day had driven to the top to meet up with us.  We went and found them in the main building on the summit.  I said my hellos to everyone and let them know I was going back outside to do my SOTA/POTA operation.

As I stepped back outside, I noticed the air seemed a bit damp.  In fact, wasn’t that a raindrop I just felt?!  Feeling some urgency, I quickly looked for a place to set up, and settled on a rocky area immediately west of the actual summit.  It sloped to the east-northeast, and seemed like it would be reasonably void of people who might run into my antenna wire.  I set up my end-fed antenna to slope east-northeast, hoping I might get some European DX.  Reflecting on this later, I think I should have sloped west, but really, it doesn’t matter a whole lot, since the directivity effect of a shallow sloping wire isn’t even that great.

I climbed down to where I figured the far end of the wire should be and stuck one of my hiking poles in the rocks.  I tied the paracord to that, which then attaches to my wire.  I ran the wire up to my operating position and used my 7-meter “squid pole” to get the wire up in the air before coming back down to the matching unit connected to the radio.  I ended up with sort of a shallow-sloping inverted-L.  Once I was done with all of this, the rain had started in earnest.

Normally, I’d have pictures of the whole setup, but with the weather seeming to worsen, I was trying to hurry and totally forgot to do pictures.

I covered my radio as best I could, put my headphones on, and found a clear frequency on 40 meters.  After checking a few times to see if it was in use, I called CQ once.  Then I pulled out my phone to send a self-spot—uh-oh!  I had checked for cell phone service when I reached the top and had seen that I had good coverage, but now my phone was reporting “no service.”  I reset the phone’s radios by engaging and disengaging airplane mode, while standing and holding the phone. The service came back.  I pulled up the SOTA Goat app and managed to get a spot sent out.  I tried pulling up dxsummit.fi on my browser, and also tried pulling up the POTA/WWFF group on my Facebook app, but couldn’t do either, so I decided I’d rely on one of the POTA guys seeing my SOTA spot(s) and re-spotting me for POTA.

Not long after sending my self-spot, my CQ’s were answered by the husband-wife team Merle, KB1RJD and Herm, KB1RJC. I got these two in New Hampshire, not far at all from the mountain, then another station in New Jersey, before moving on to 20 meters. The rain had gotten way lighter in these few minutes, but the temperature was dropping, so I wasn’t entirely comfortable.  Of course, I could have put on another layer, but I didn’t think of that.  Also, the weather situation seemed like it could rapidly change for the worse.  So I continued to hurry.  After self-spotting on 20 meters, I quickly got several more contacts, including another well-known chaser husband-wife team, Gary W0MNA and Martha, W0ERI.  Also, I got to hear from a few stations out on the west coast.

The last few minutes of operation, I kept thinking I was going to end off, then I’d hear another call sign!  It was pretty thrilling.  Finally, after 3 QSOs on 40 meters and 10 QSOs on 20 meters, I started packing up.  I’m pretty sure I never got spotted for POTA/WWFF, and in my hurry, I didn’t think of asking anyone to do it for me. I wished I had planned that part out a little bit better, but the activation was fun nonetheless!

Right around that time, my brother-in-law, one of the people who’d driven up, came by to see how things were going.  He was hoping to catch me “in action” making contacts, but I had already started packing up.  He did manage to get a picture of me. 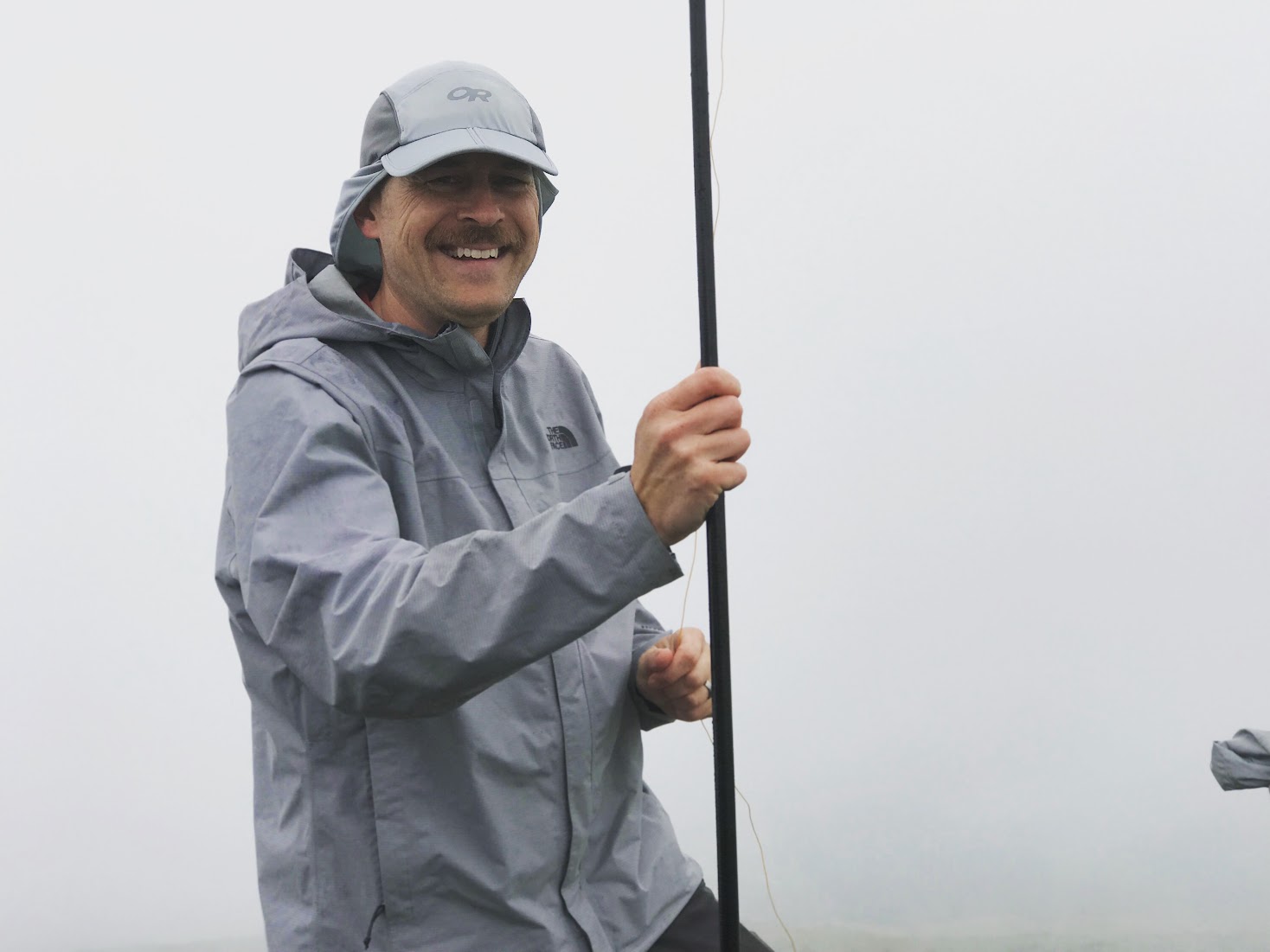 Once I got everything put away, I went to try and find my family.  It turns out they had been on the summit for a little while before we had arrived, so everyone was starting to head out.

My wife and one of my sisters who’d hiked up with me chose to get a ride back down the mountain.  So, my older sister and I said our farewells and started our hike back down.  By this time, it was just slightly misty—no rain—but the summit was still entirely shrouded in clouds.  Knowing the route we took to get up here was quite steep, and slippery in places, we took a different route down—via the Jewell trail. As we started our descent from the summit, we were already starting to come out of the clouds. 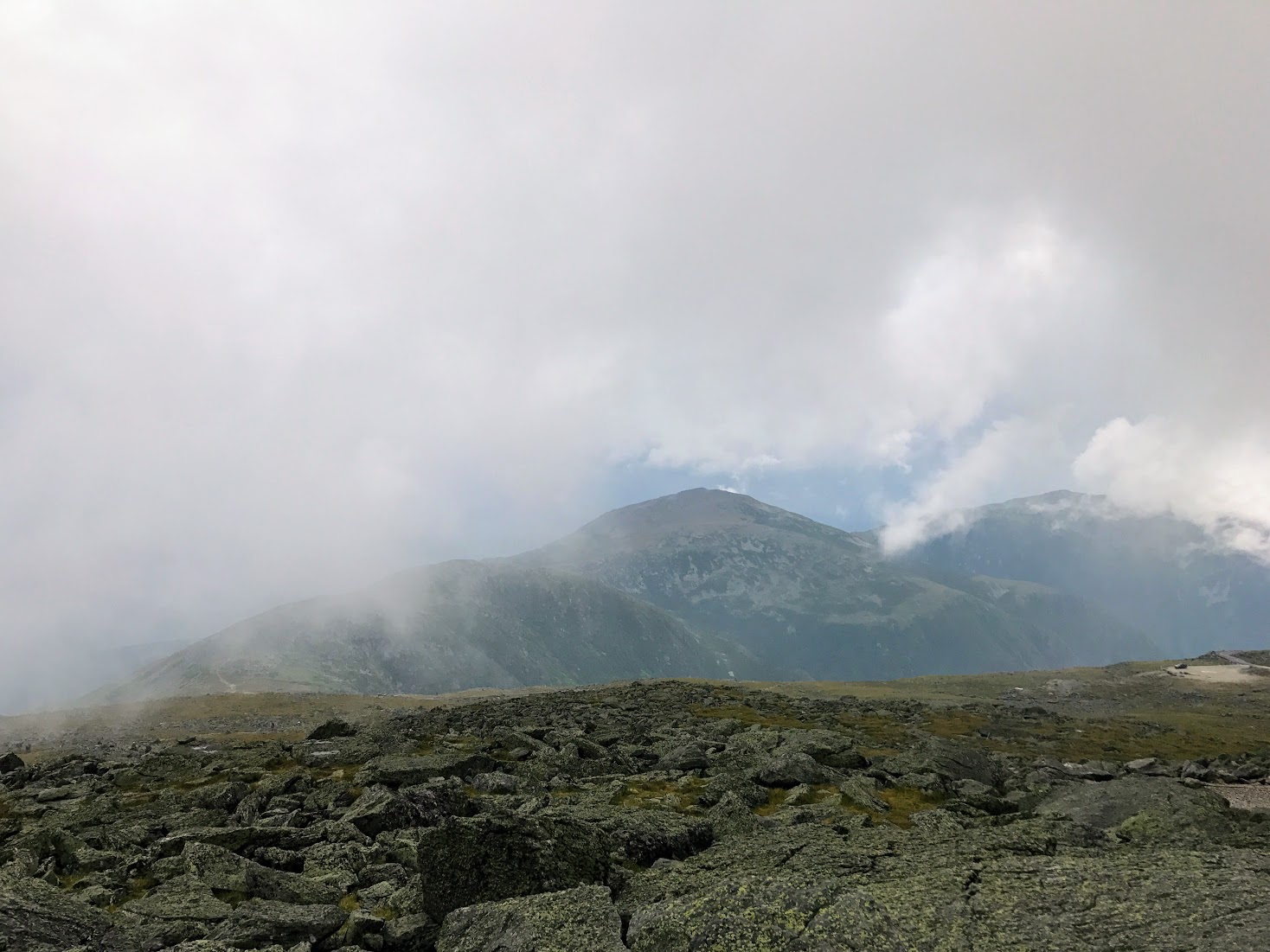 Hiking down the rocky summit, out of the clouds

Shortly after descending off the immediate summit, turning north on the Gulfside trail to connect up with the Jewell trail, we crossed the Cog Railroad.  It’s a one or two-car train that takes people straight up to the top of the mountain.  Pretty cool, but a bit pricey for me, so I prefer to take the no-cost route to the top! 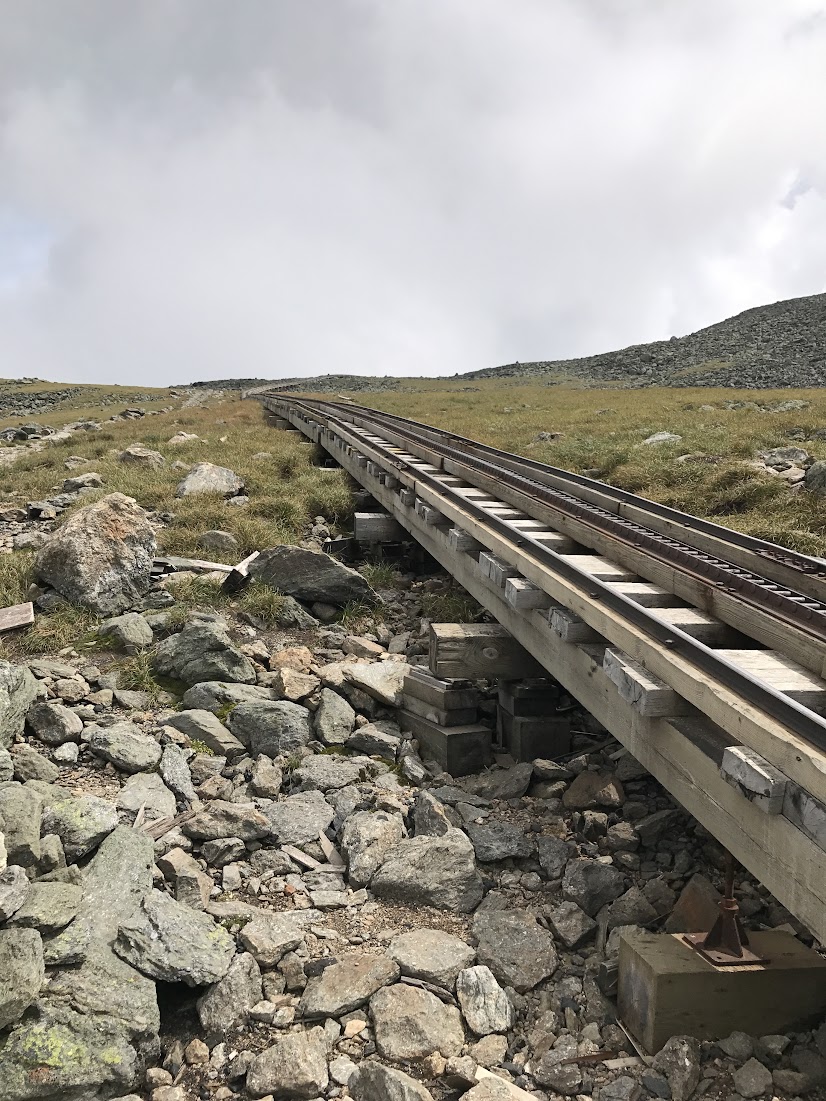 Once we were out of the clouds, the scenery was just breathtaking.  It reminded me of photos I’ve seen of Scotland.  Later on, showing people who’d been to Scotland, they agreed it looked like it. 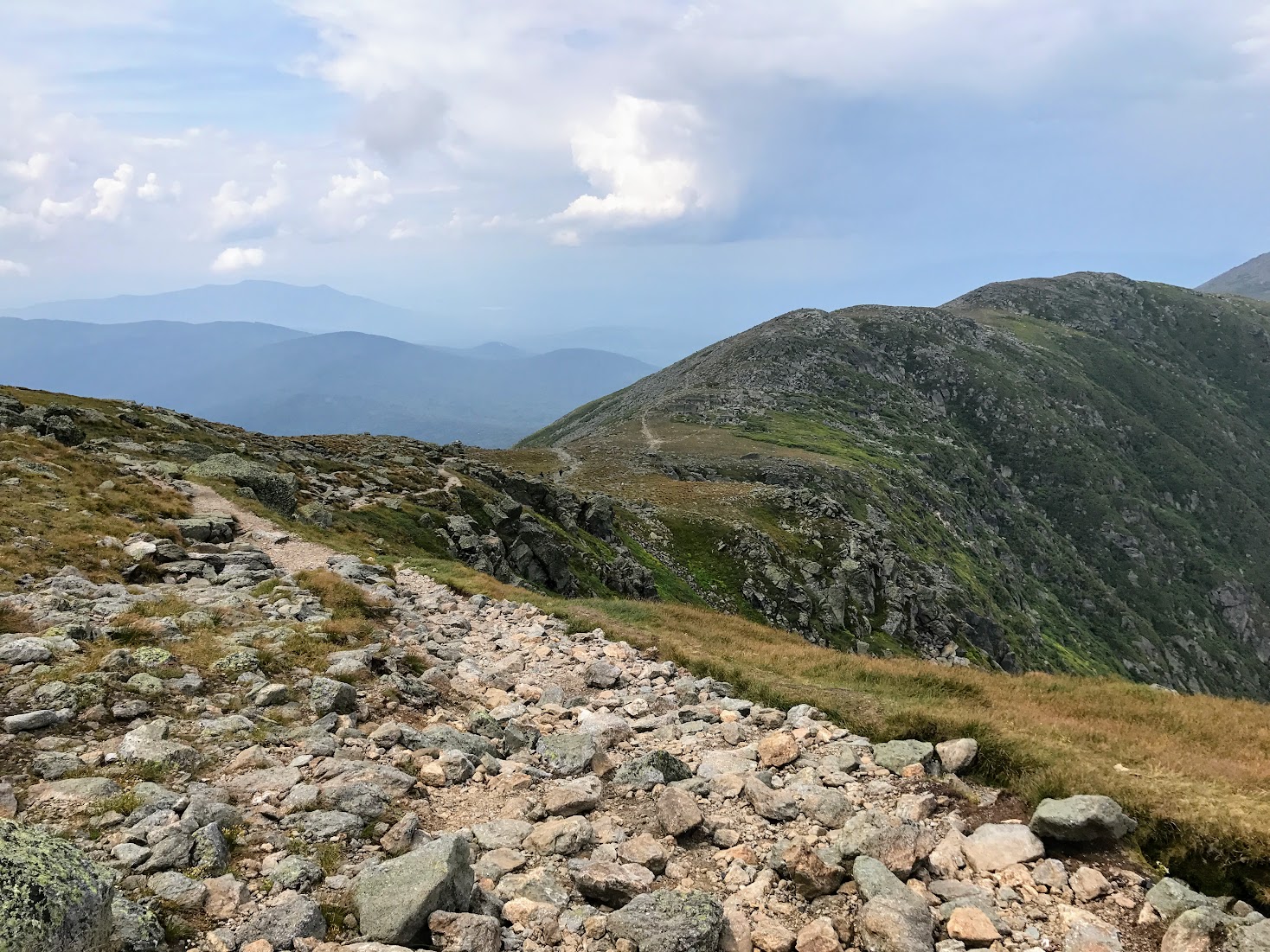 This is not Scotland. This is New Hampshire.

The first mile or two of the hike down was pretty steep, and involved lots of rock-hopping.  But the views continued to be amazing, and the weather continued to mostly cooperate, with only a few showers here and there. 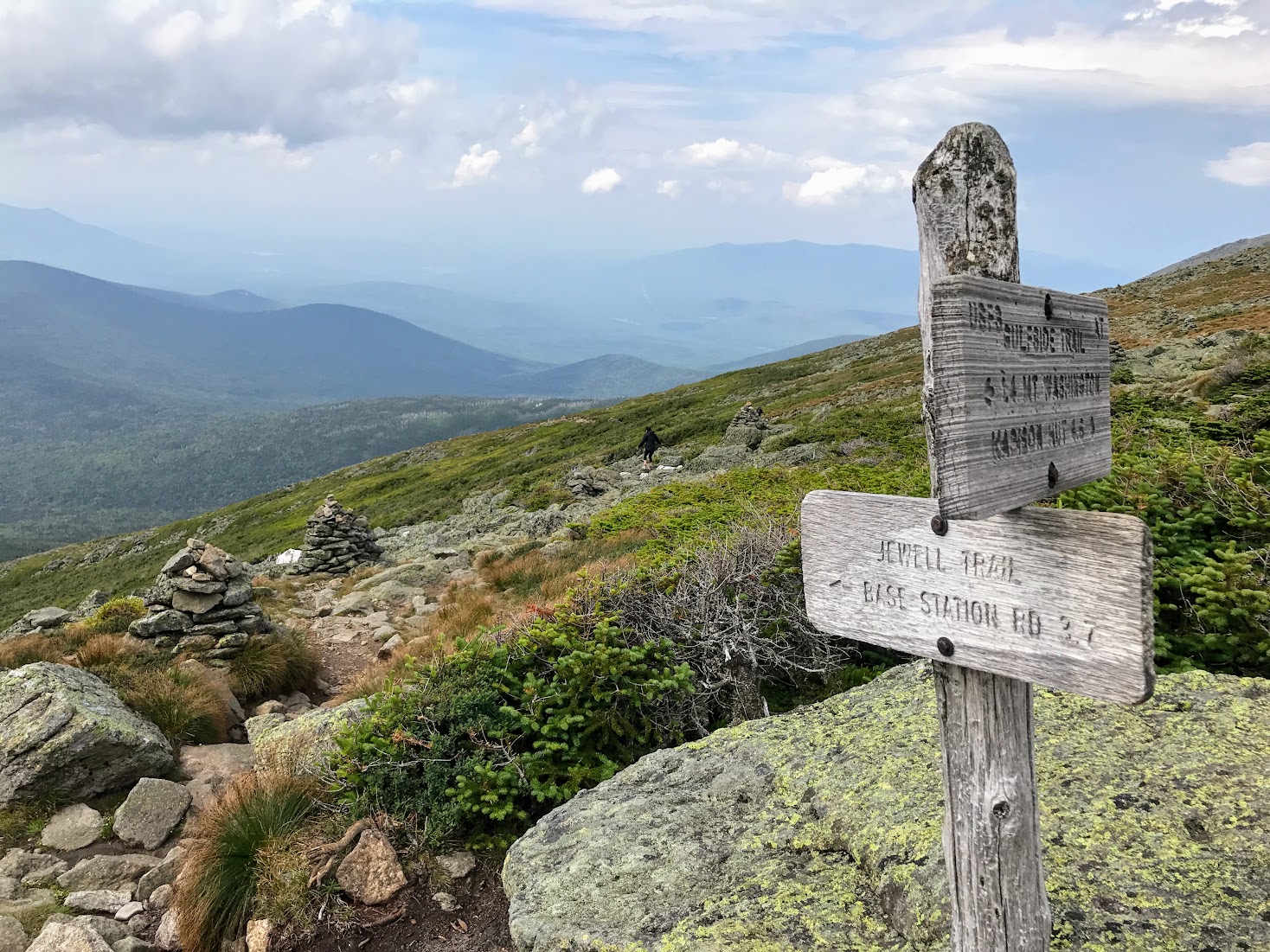 Getting onto the Jewell trail

While the climb up had taken around 4.5 hours, the hike down took just under 3 hours. It was still fairly steep, but had several less-steep sections where we were able to move quite quickly.  Back at the car, we enjoyed another stop at Dunkin’ on the way back.