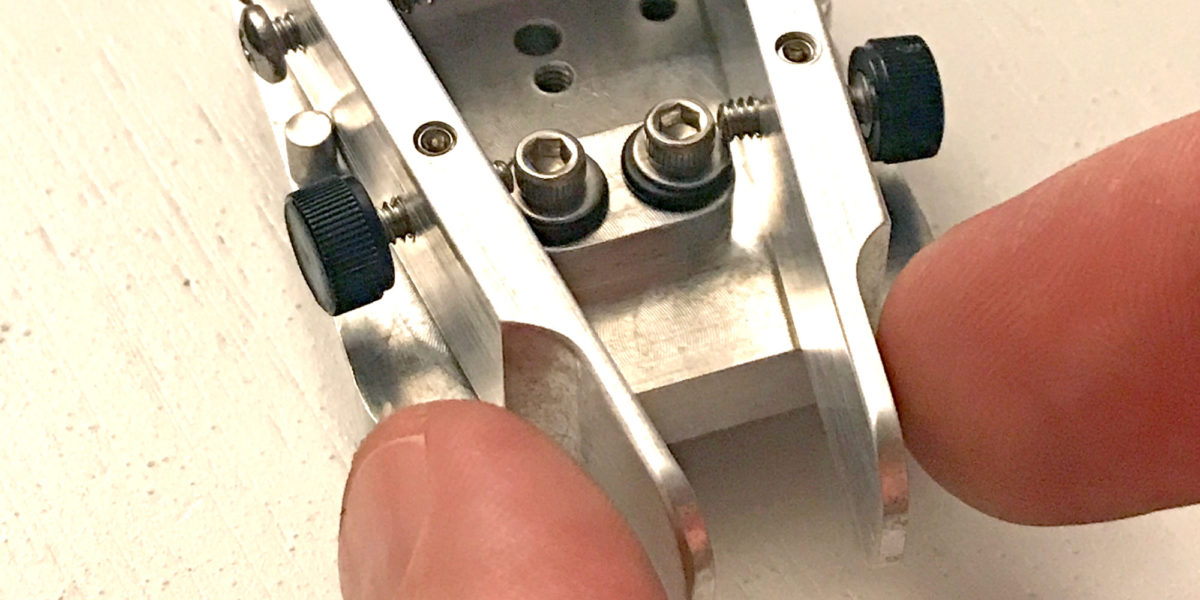 OK, so saying “DCP Paddle” is redundant.  “DCP” stands for “Dirt Cheap Paddle.” While this paddle is inexpensive compared to a lot of morse/CW paddles out there, I would definitely not call it “cheap.”  It is exquisitely designed and expertly machined by Doug W6AME of American Morse Equipment.  I don’t remember where I first heard about his paddles and keys, but I knew I had to have one as soon as I saw it.  The DCP is the least expensive paddle he makes (hence the name) but doesn’t lack quality.  I have a pretty tight budget for my ham activities and equipment, so I was holding off on getting one until I really needed it.

I recently thought I lost my QRPGuys Mini Iambic Paddle.  I had done a trip to the east coast and couldn’t find it when I got back. I was quite upset, not because of the cost (it’s *really* inexpensive), but because I built it and tweaked it to my liking. Even though I have a nice Bencher BY-2 on loan, I needed something I could bring to work for practice sending during the day.  With my CW Academy class starting soon, I decided it was time to go ahead and order the DCP from American Morse. I went ahead and put my order in last week, and had the kit arrive in just a couple of business days.  While the paddle was on its way, I sent an email to Doug about portable mounting options for the paddle and he got back to me right away with some good suggestions.

Over the weekend, while getting some stuff together for a SOTA activation hike, I found the missing QRPGuys paddle.  It had never come to the east coast with me. I had simply put it away in a place that didn’t make sense.   Nonetheless, I was still very excited to get the DCP, since it’s a whole different level of paddle.

Upon arriving home from work yesterday, I found the kit had arrived. 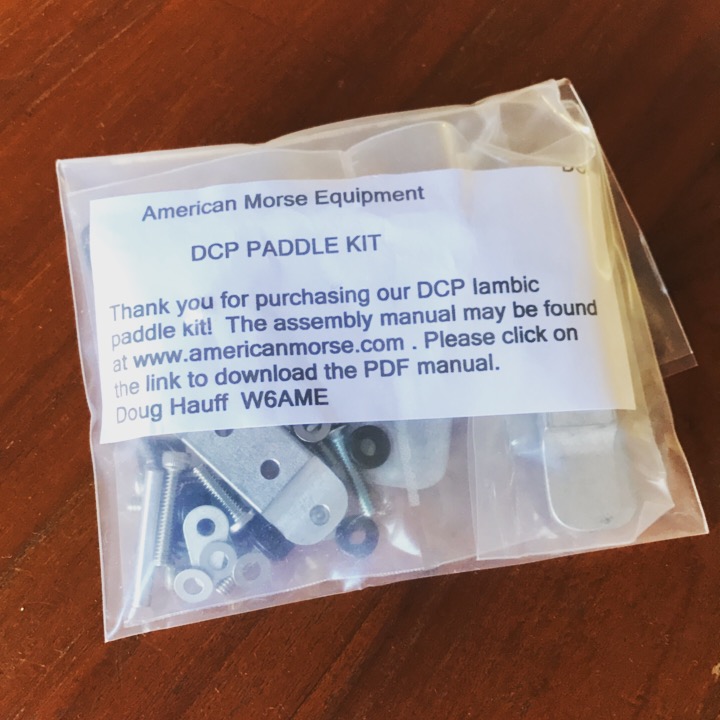 I was so excited, I went and grabbed a container and opened the bags immediately, spilling the contents into the container to start sorting.  The the assembly manual says to de-burr and finish the parts with a fine file and/or wet and dry sandpaper, but I didn’t have either of those handy and was eager to get the thing together. I grabbed some fine steel wool and did the job with that.

After dinner, household chores, and getting the kids to bed, I put the kit together while re-watching Game of Thrones. The instructions are very straightforward, and the kit is so simple, I think it could probably be done without instructions.  Nonetheless, I followed them to ensure success.

The tension on the paddles is controlled by stacking washers on the back screws that hold the spring. I have two washers on there right now and the tension seems pretty OK.  If I get to the point where I’m using tighter spacing, I might increase the tension a bit.

Having gotten it all together, I tweaked the spacing a bit and tried out the feel.  This thing is really a tiny paddle, as you can see from the pictures (I don’t have giant fingers), but it really has a big-paddle feel.  I don’t know how else to describe it.  I’m no CW veteran—heck, I’m barely even a novice—but this paddle has smooth action and very definitive contact.  It’s not the Bencher, but it certainly isn’t far behind.

For portable use, there’s definitely a lot of aluminum in a small space, so the weight isn’t insignificant at 73 grams. But it’s light enough! 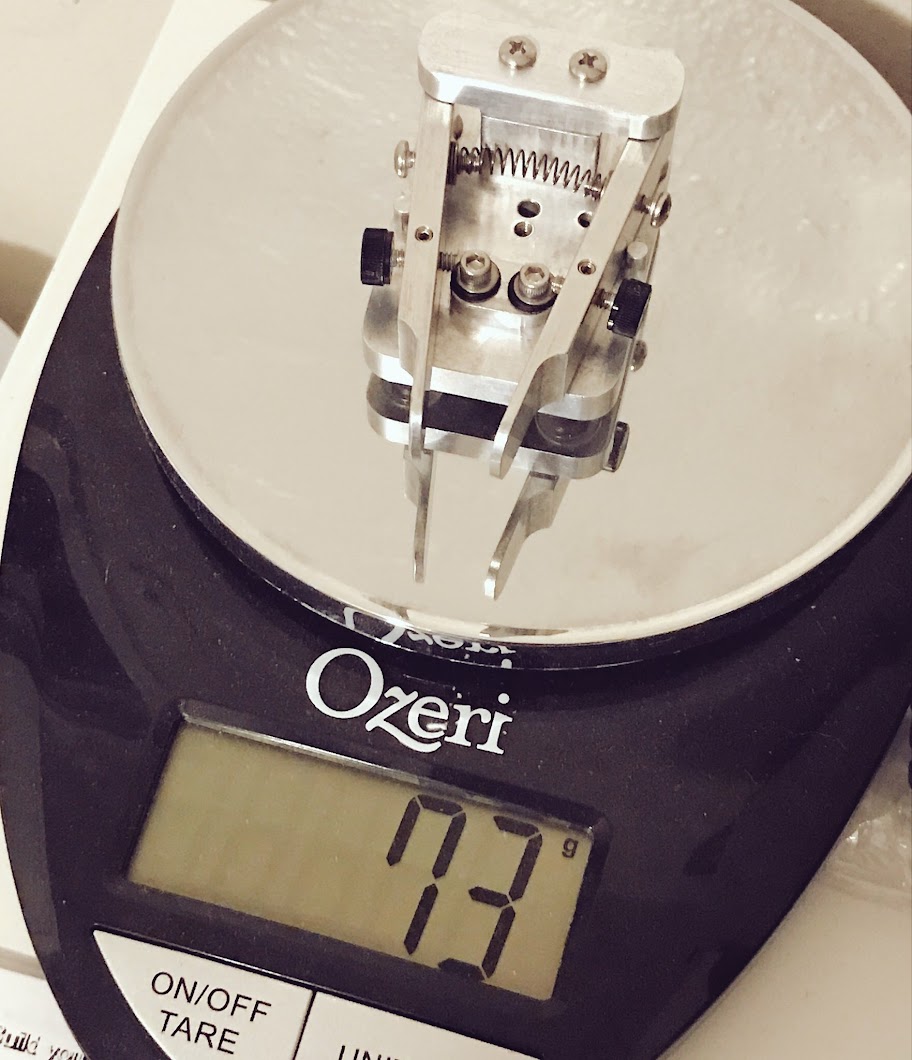 I soldered a cable on this morning before heading in to work, and brought it in with me to try it out when I got a free moment. It works quite nicely!  It is small and light, so requires holding on firmly with one hand, while operating it with the other.  For portable operation, I plan on getting the “Quikmount” base which will add some weight and make it more convenient to use.  I’ll either attach magnets to that and stick it to the FT-817, or just use the supplied 3M “Dual Lock.” We’ll see—I may come up with some other improvised mounting method.

I haven’t decided yet whether I want to also use this in the home shack.  If I do, there’s a base American Morse sells, to which it can be attached.  More likely, I’ll get a separate paddle for home use. Perhaps a gently used Bencher BY-1.

I’m at the very beginning of my Morse/CW journey, but I can say with confidence that I’m very happy with this purchase.  I can’t wait to start CW Academy next week!