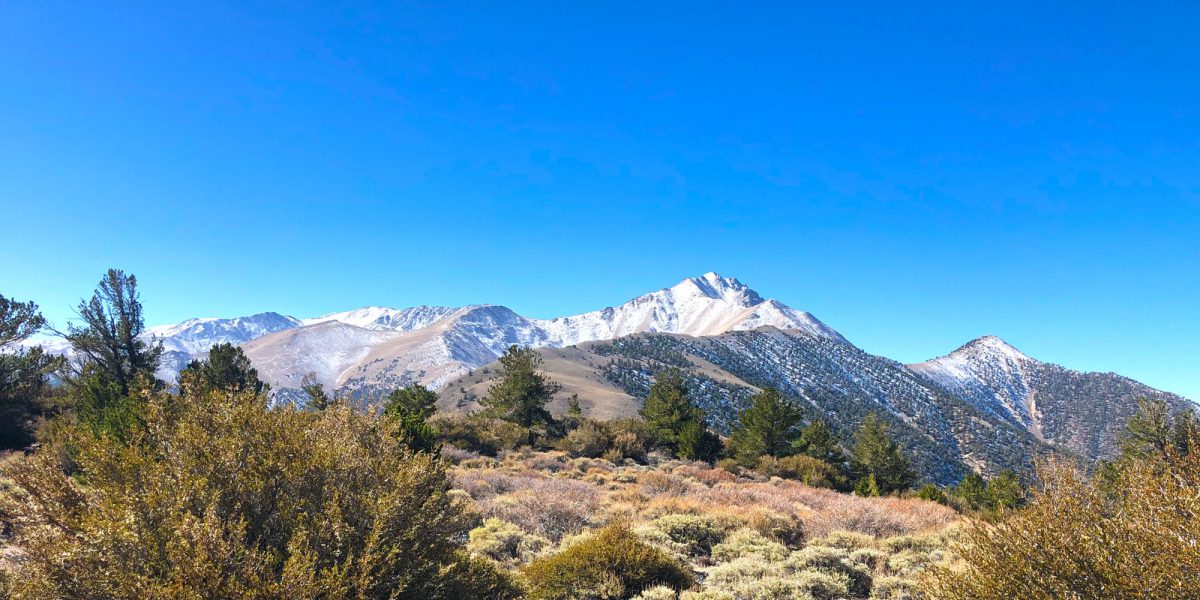 Mustang Peak was part of the mini SOTA expedition Jame N6JFD and I did mid-October of 2018. It’s a fairly insignificant summit, in the middle of nowhere. It’s hard to even get to the place where we started hiking. But there are some fairly nice views to be had.

This summit was part of the mini SOTA expedition Jame N6JFD and I did mid-October of 2018. I’m writing this in April 2019 and back-posting it since I realized I never got around to writing it up last year, so some of the detail may be missing. It’s a fairly insignificant summit, in the middle of nowhere. It’s hard to even get to the place where we started hiking. But there are some fairly nice views to be had.

There may be another way to this summit, especially if your only SOTA goal in the area is this one summit. If you look on maps, there’s a road that approaches the summit from the north. I don’t know whether there’s access to that road or not. Also, there may be considerable bushwhacking required if approaching from that direction. Jamie and I were already camped at Kennedy Saddle, for the previous days’ SOTA activities, so we planned on approaching this summit via the SW ridge. See my post on those summits for info on getting here. Depending on your vehicle, you may or may not be able to get all the way to this saddle. Jamie’s souped-up Tacoma was more than up to the task.

Having gotten a good night of sleep following our two summits the previous day, we set out to go grab this summit after a good breakfast. We’d planned out an approximate route on maps, and visually from our hike the previous day.

The hike starts out on a faint use trail that disappears within 20 yards or so. From there, it’s an off-trail journey, bordering on bushwhack the rest of the way. And since we were headed straight up the ridge, we gained elevation quickly.

There were sections requiring a little bit of light scrambling, though these could probably be avoided if you wanted to do a bit more bushwhacking. I prefer a little bit of climbing over forcing my way through the brush.

The first bit of the climb goes up and over Kennedy Point – a sort of sub-peak named on most maps.

We could’ve avoided the elevation gain of going over Kennedy Point, but on the north side of it is a nasty steep slope of loose rock, with the south side covered in nearly impassable brush. The top of the ridge is pretty easily navigated.

Approaching the top, there are a couple more difficult brush sections, but nothing too crazy. I never seem to get pictures of these tougher sections, since I’m busy getting through them.

Once we were in the activation zone, we didn’t try super hard to get to the actual summit. The brush was getting thicker and thicker. It seemed it’d be pretty difficult to reach the highest point. So we looked around for good spots to operate and did so.

Since I’d broken the link on my EFHW antenna, I was stuck with 30 meters only. This worked out pretty well, since I could operate on 30 meters while Jamie worked other bands, and we had no issues with interference. Just to be sure, we operated a good distance apart from each other.

I don’t have pictures of my setup, unfortunately, since I forgot to take them. But I found a tree and threw my antenna wire over it. I got a nice spot on a log in the shade and started operating.

I got 7 contacts on 30 meters, 8 contacts total including a contact with Jamie outside the activation zone using our HTs. A pretty quick and simple activation!

After packing up, I went over to see how Jamie was doing. He’d made several contacts, too, and was just about ready to go.

We pretty much went back the way we came, with little variation.