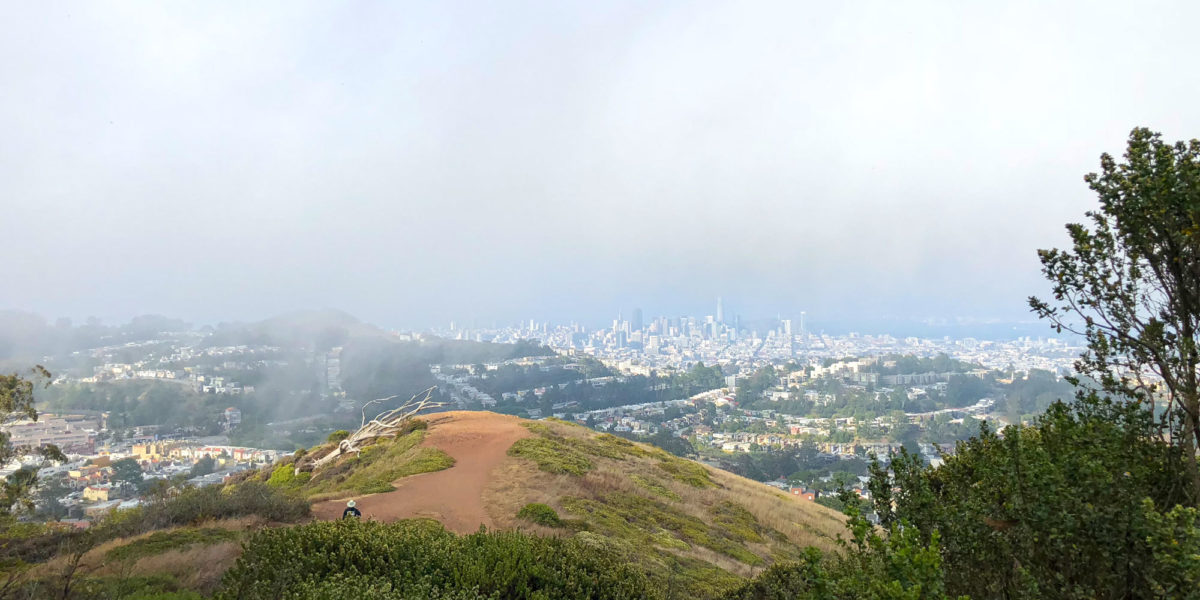 This is one of those urban summits that are great to do if you happen to be in the area. I’d driven my car up to San Francisco (I normally take the train) and decided to do a quick activation of this summit on the way back. I’d done it once before, so there was no mystery as to the length of time it’d take, or where I’d set up.

This is one of those urban summits that are great to do if you happen to be in the area. I’d driven my car up to San Francisco (I normally take the train) and decided to do a quick activation of this summit on the way back. I’d done it once before, so there was no mystery as to the length of time it’d take, or where I’d set up.

There are multiple ways to get to the top.  I think there might be 5 or 6 trailheads on the different sides of this hill.  I go to the one on the south.  There’s usually street parking there.  I’ve also seen other people do activations by taking the bus to the bus stop that happens to be right at this trailhead.  I had my little dog, Obi, with me so I parked and got him and all of my stuff ready to go. 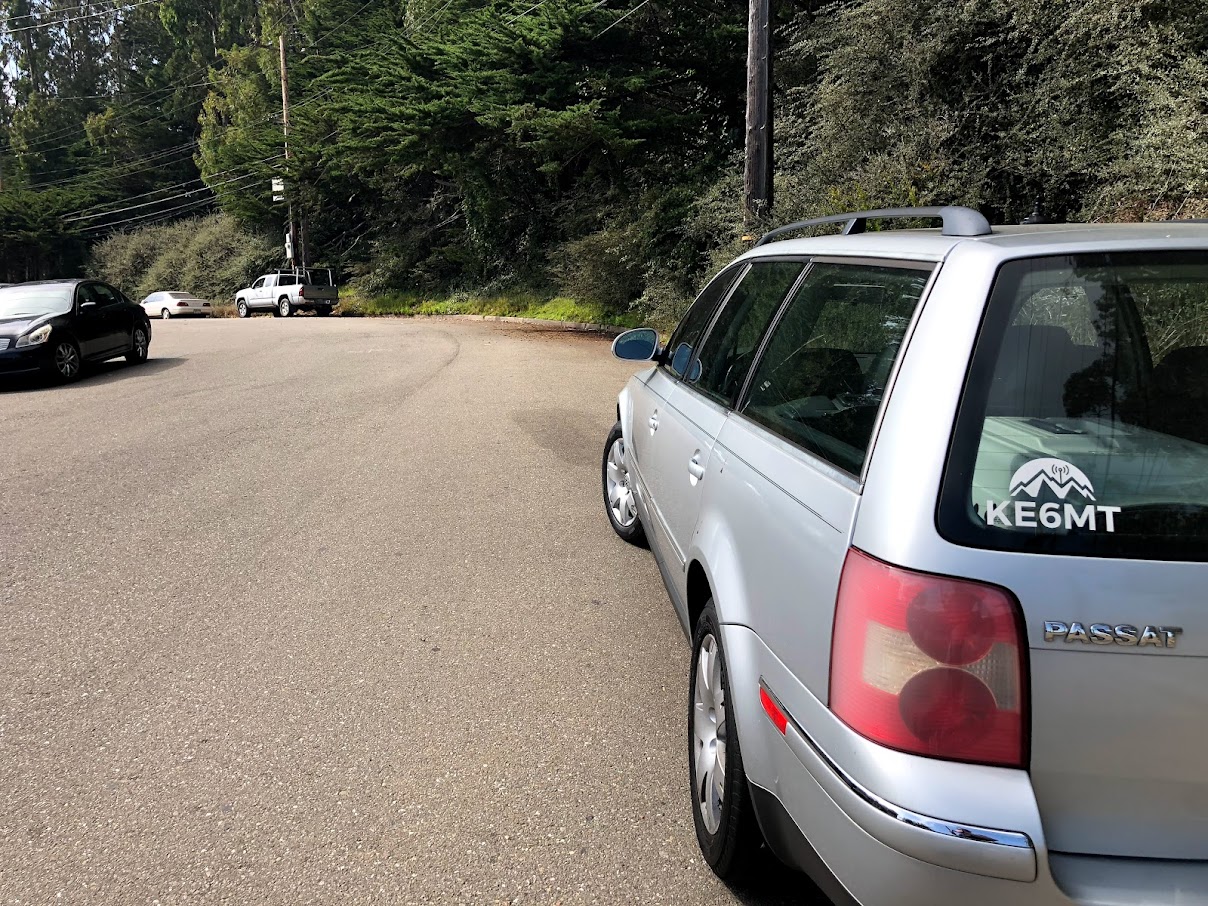 Parked and ready to go

It’s pretty straightforward—follow the paths up until you’re at the top! Here are some photos of the short walk up. 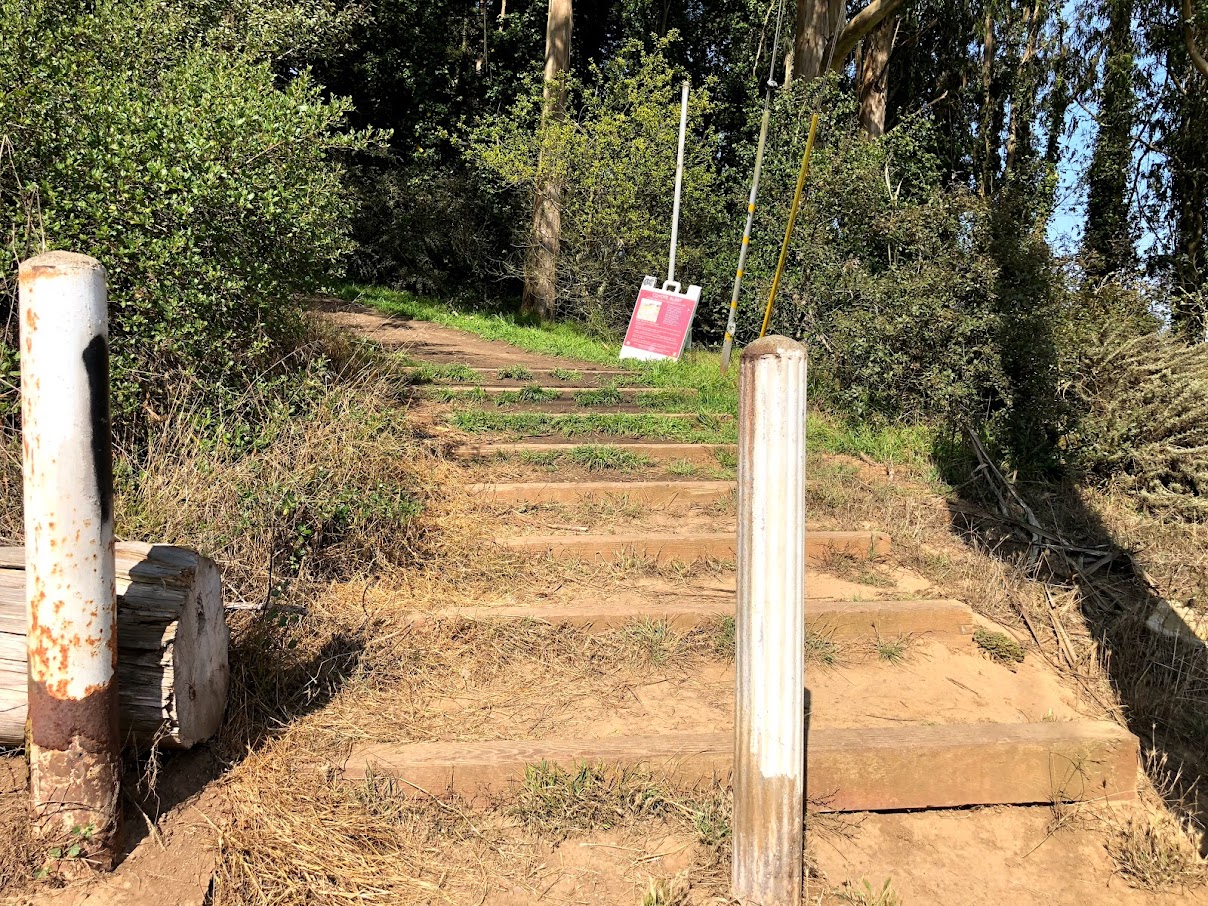 The path starts with some stairs 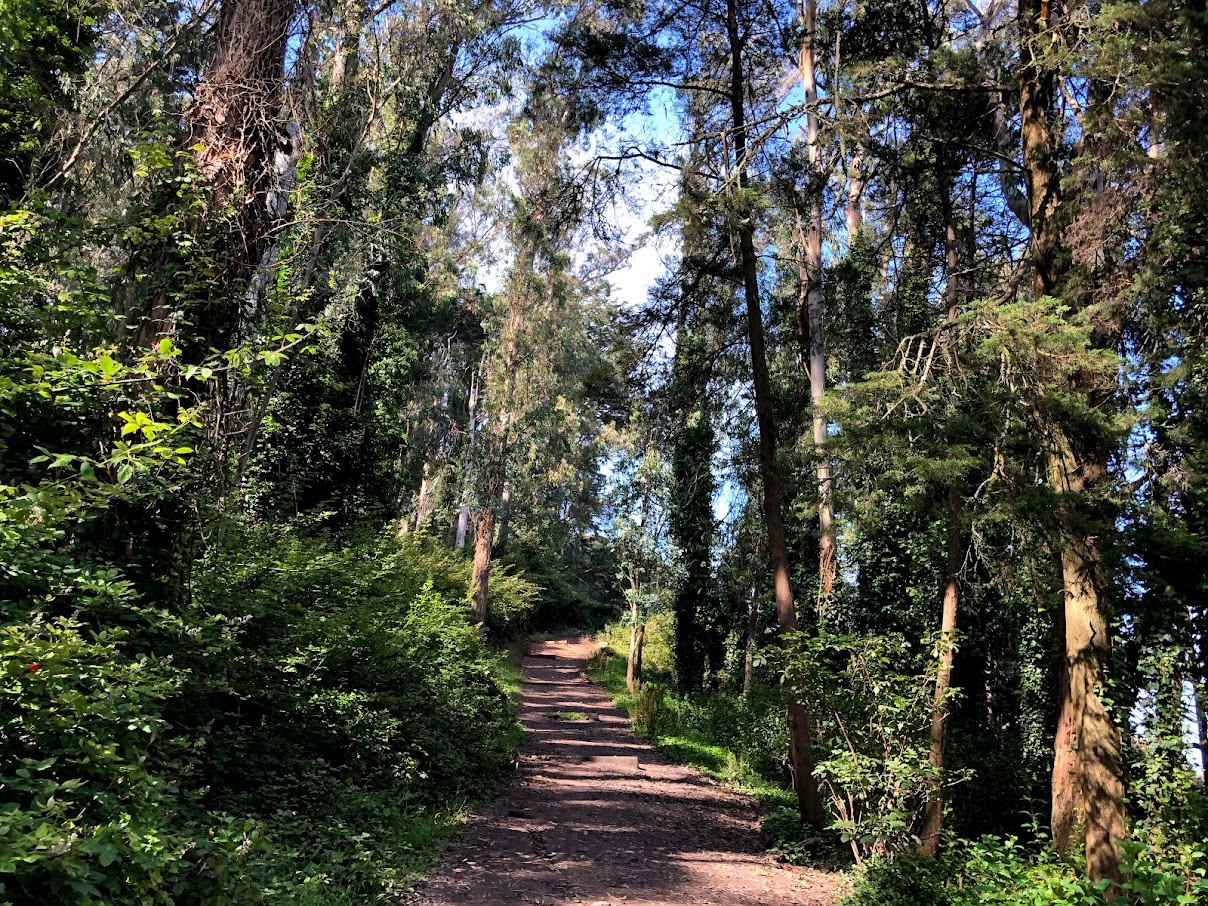 A short, muddy (from the fog) walk through the eucalyptus trees 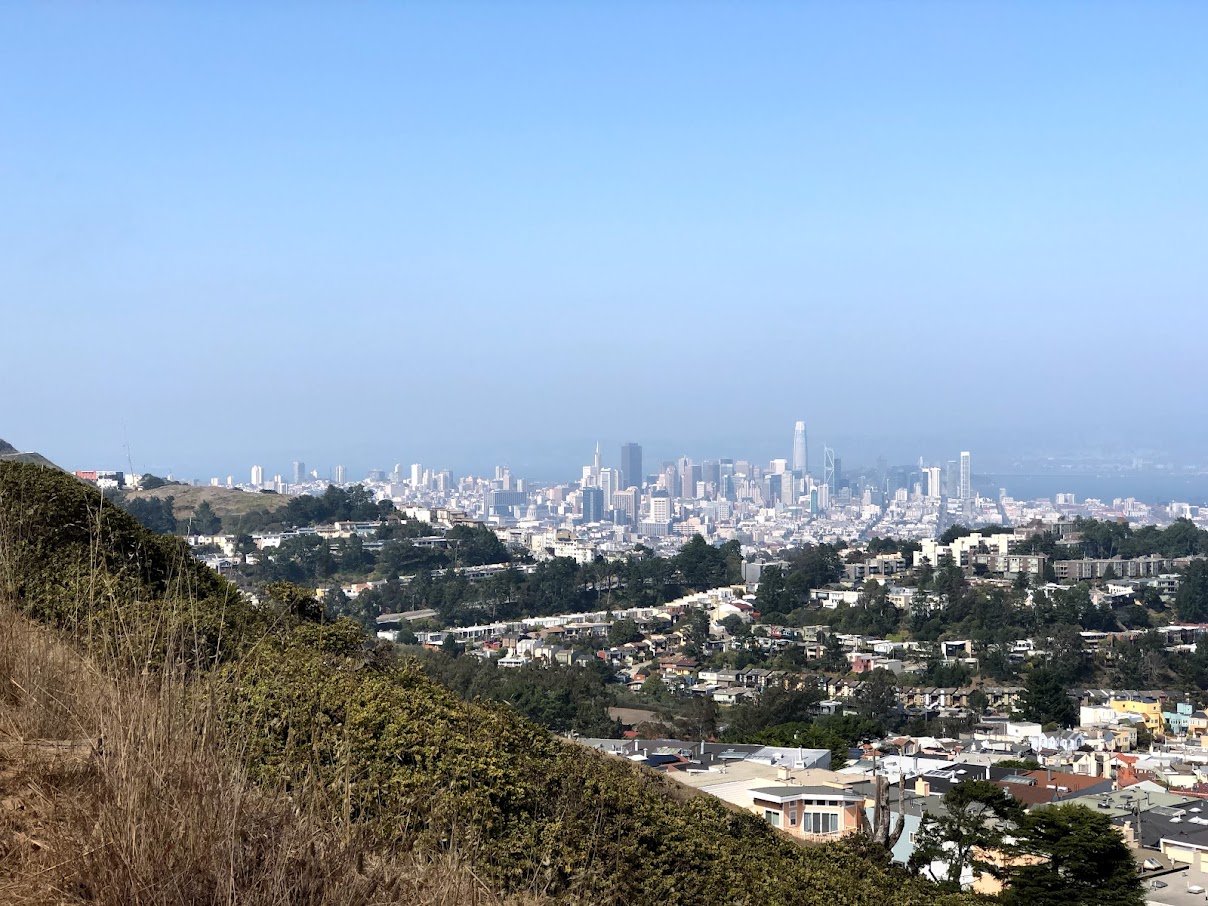 Nearing the top of Mount Davidson, you’re rewarded with a view of San Francisco 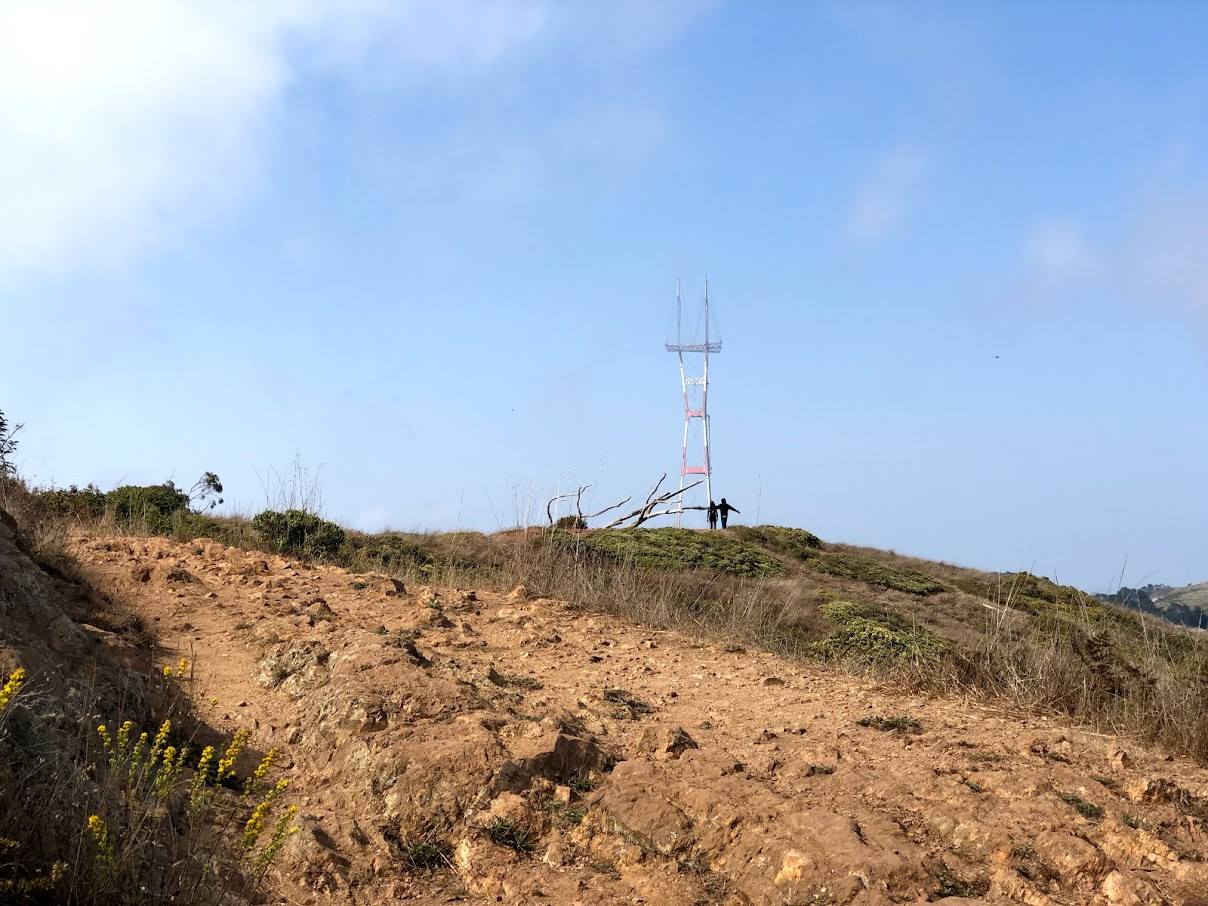 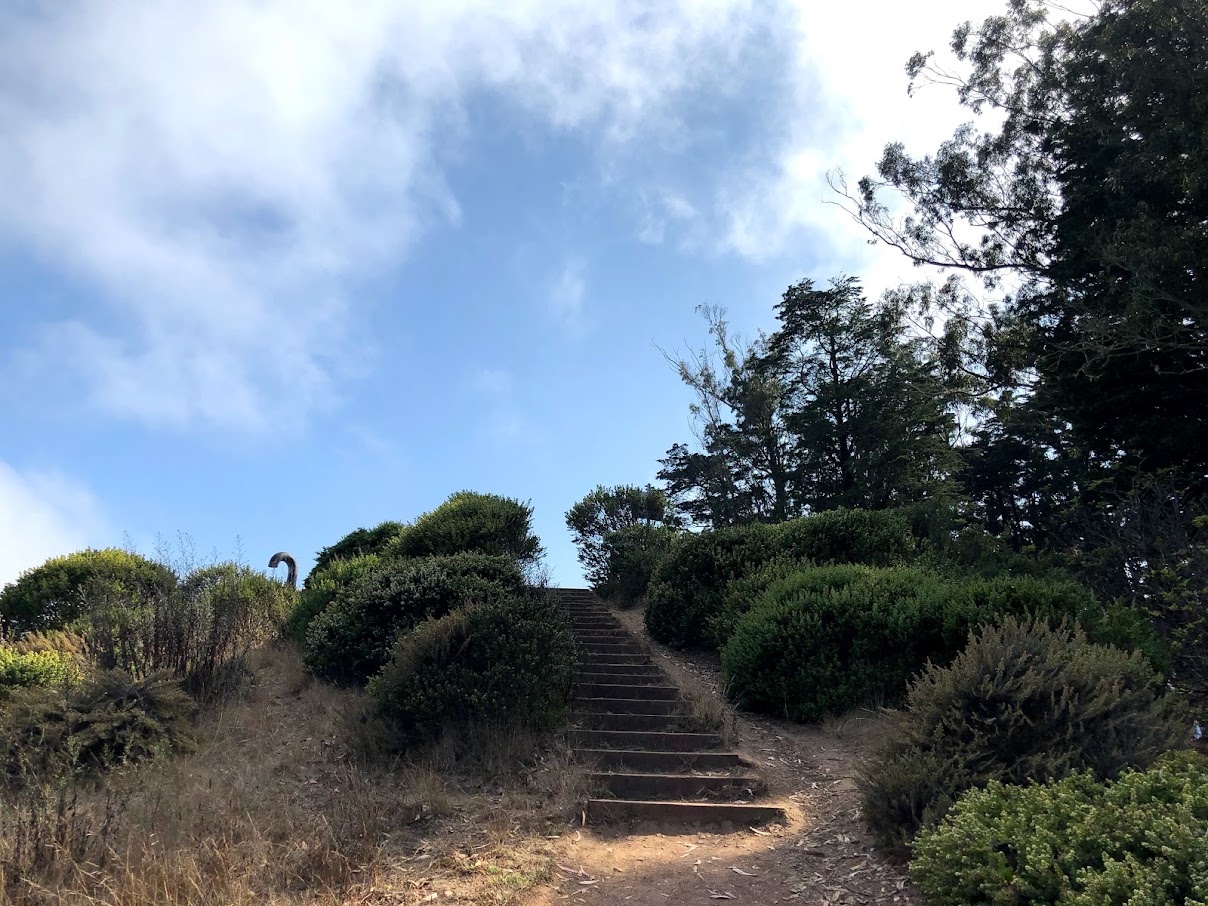 Final stairs to the top of Mount Davidson 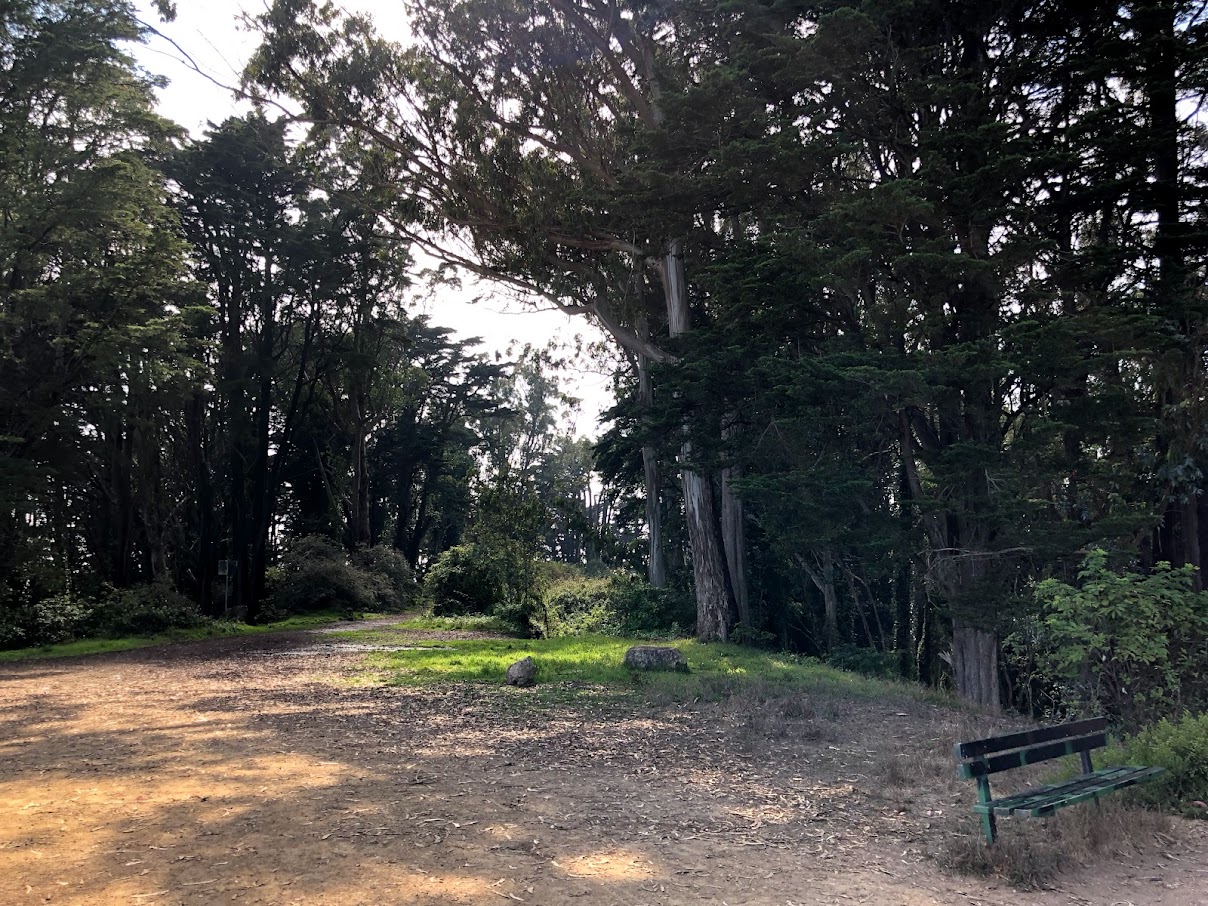 The top (basically) of Mount Davidson

It was here that I planned to operate. But first I walked around a little bit to see the giant cross at the top (there’s quite a bit of history there).  By the time I walked back to the area where the bench is, a couple had taken it and didn’t seem to be leaving soon.

Planning on setting up the end-fed antenna, I picked a tree that would be good for operating from the ground some distance from the bench, but would also allow me to move to the bench if the couple on the bench ended up leaving.  It took a few throws, but I ended up getting the antenna up in a nice, high branch. I walked over to a bare patch of ground and set up shop.

While I was setting up, I made contact with Elliott, K6EL on 2 meters.  He said I had a decent signal, but his was coming in weak. I think my poor little VX-2R was overwhelmed with the amount of RF up on the summit.

I got on 40 meters and made several contacts, including one local (hi George N6NKT!) and finished with N0OI (Scott, your callsign is crazy on Morse code!).

The couple at the bench then looked like they were leaving so I got ready to move. Once they left, I tried moving the near end of the antenna over to the bench, but it wasn’t ideal, in that part of the wire drooped into an area people would walk.  So I decided to pull it down from the tree it was in and throw it up into another tree. This took me a while (I’ve gotta perfect my throwing technique!). I put the near end of the wire up on the pole, so that I’d have more of it further from the ground. 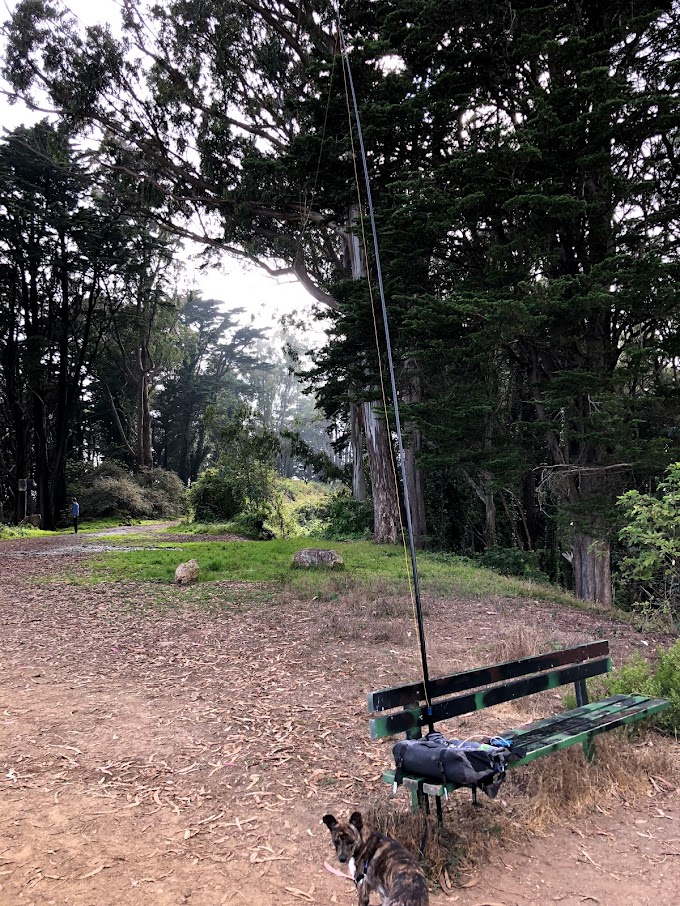 Antenna wire goes up the pole, then to a high tree branch

I finally got set back up on the bench and called CQ on 20 meters. 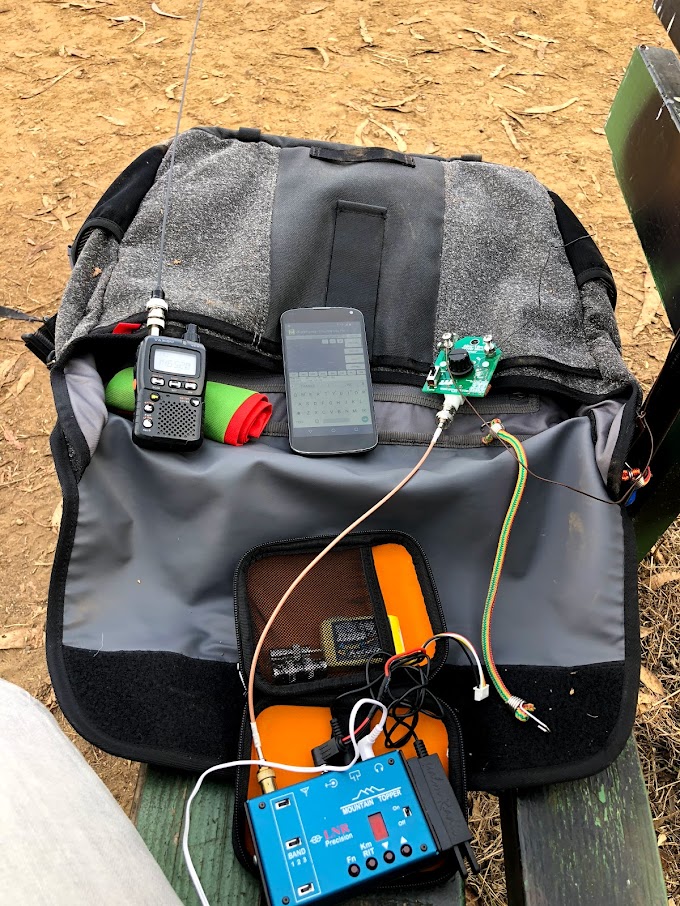 More comfortable than the ground!

I made several more contacts on 20 meters, including John ZL1BYZ over in New Zealand!  That’s always a pleasant surprise.

While I was packing up, I got a message from Austin, K6ABM asking if I was still on the summit.  We tried making contact on 2 meters and I just couldn’t hear him, even though he could hear me just fine.  We tried 70cm (446MHz) and made the contact through some interference.  Phew!

All in all, a nice little summit stop on the way home.  Thanks, Chasers!