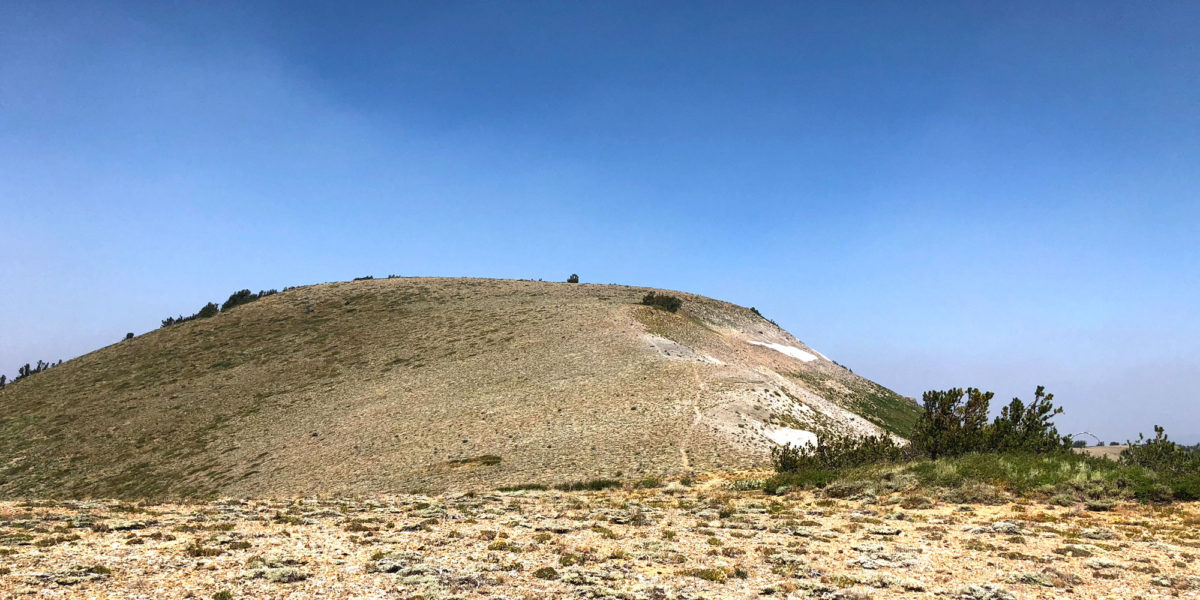 On a backpacking trip with some friends, I planned this beautiful Sierra summit as a little side-trip for one of the mornings. Last time I’d come to Round Lake, I did Red Lake Peak and Stevens Peak.  This time around, I wanted to get another unique summit in the log, and do something a bit easier.  This isn’t an easy summit, but it isn’t super hard, either!

On a backpacking trip with some friends, I planned this beautiful Sierra summit as a little side-trip for one of the mornings. Last time I’d come to Round Lake, I did Red Lake Peak and Stevens Peak.  This time around, I wanted to get another unique summit in the log, and do something a bit easier.  This isn’t an easy summit, but it isn’t super hard, either!

For my backpacking trip, I was camped at Round Lake with some friends.  We’d hiked in from the Big Meadow trailhead for the Tahoe Rim Trail. I actually managed to talk everyone into joining me for the first leg of the trip along the Tahoe Rim Trail to the spot where it meets up with the Pacific Crest Trail.  Before leaving on our run, we enjoyed the view of the lake a bit. 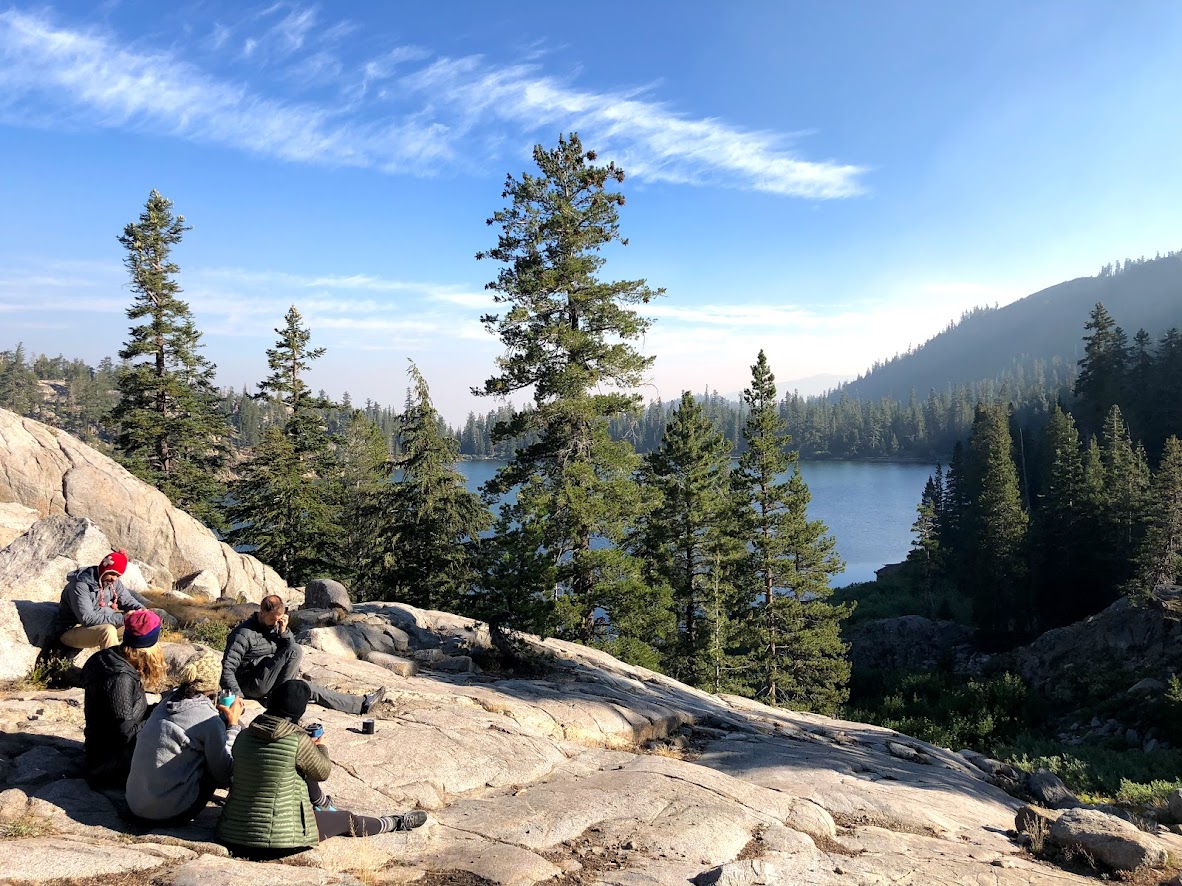 Enjoying some morning coffee by Round Lake

We got a bit of a slow start. Once everyone was ready to go, we started the gentle climb out of the Round Lake basin. This part was a slow hike.  Early on, one of our dogs took off into the forest and we stopped for over 10 minutes, searching for him.  We finally found him and got rolling again.  Once we reached the top of this climb, some of us started running the trail.  It was mostly flat, with some slight uphill but mostly downhill parts.  It’s not long before the trees open up for some nice views. 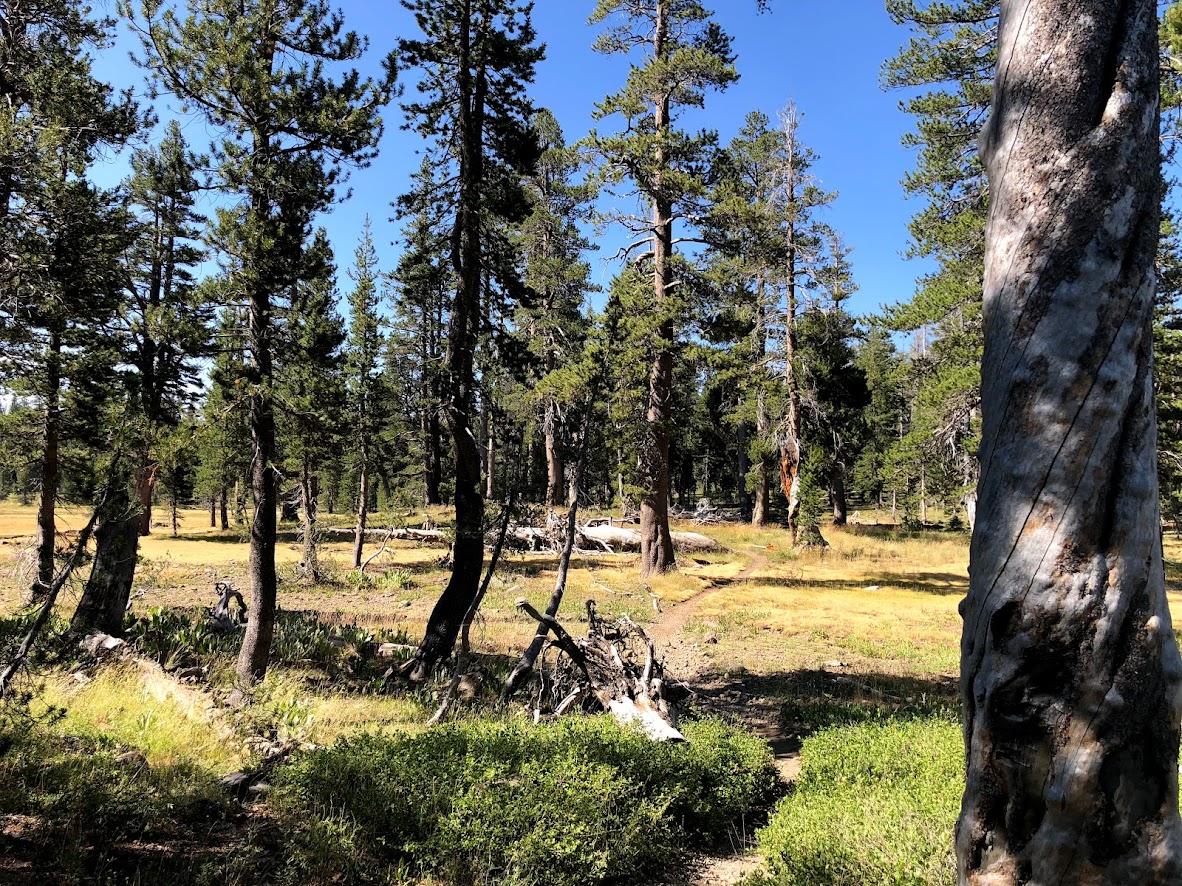 Running through meadows with sparse trees

Before long, we were at the TRT/PCT junction. I arrived a few minutes ahead of everyone.  I took the time to tend to some blisters I’d developed from new street shoes the week before. Once I finished with that, the rest of my group showed up to enjoy the view of the meadows. 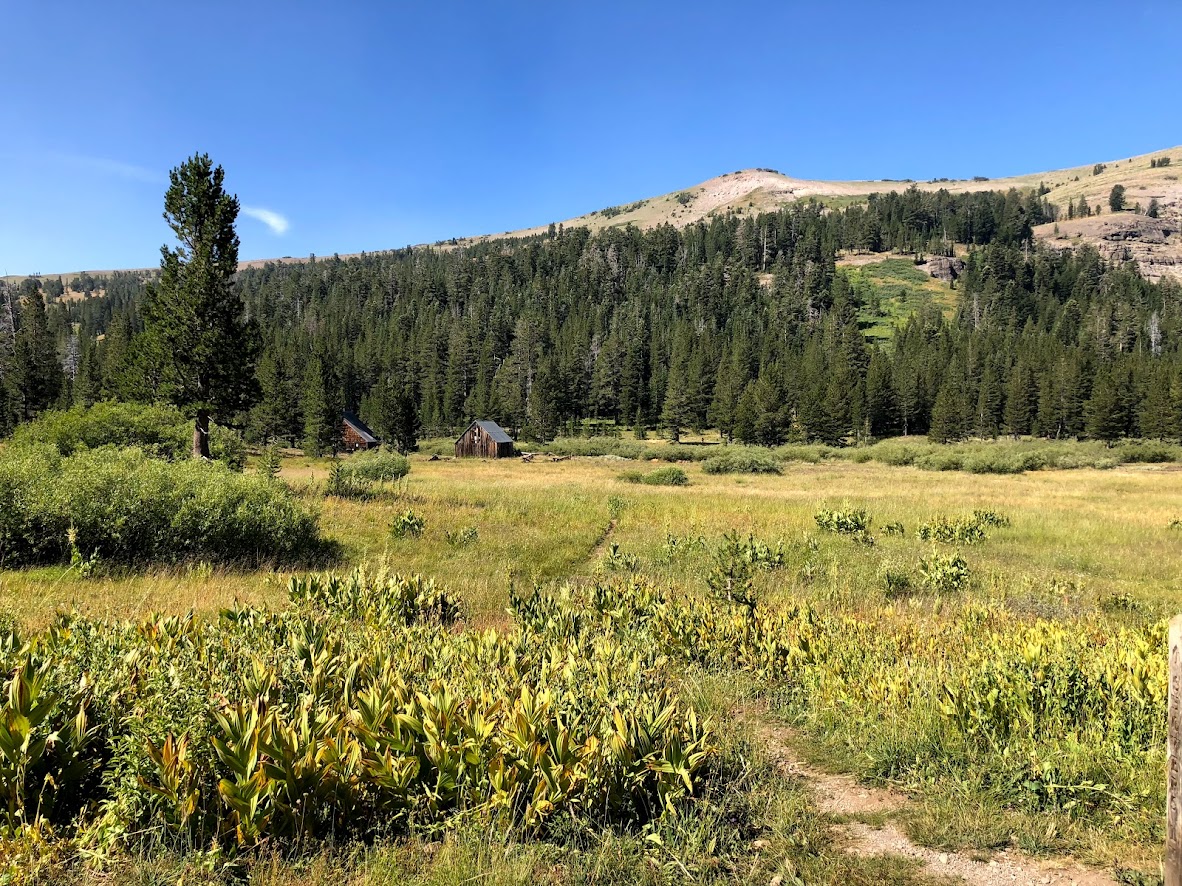 We hung out for a couple of minutes before I resumed my solo quest for the summit.  Running along the PCT is different from other trails, it seems to me. It feels more like a super-highway of a trail (at least in this section) with nothing to trip on and with a very clear path. 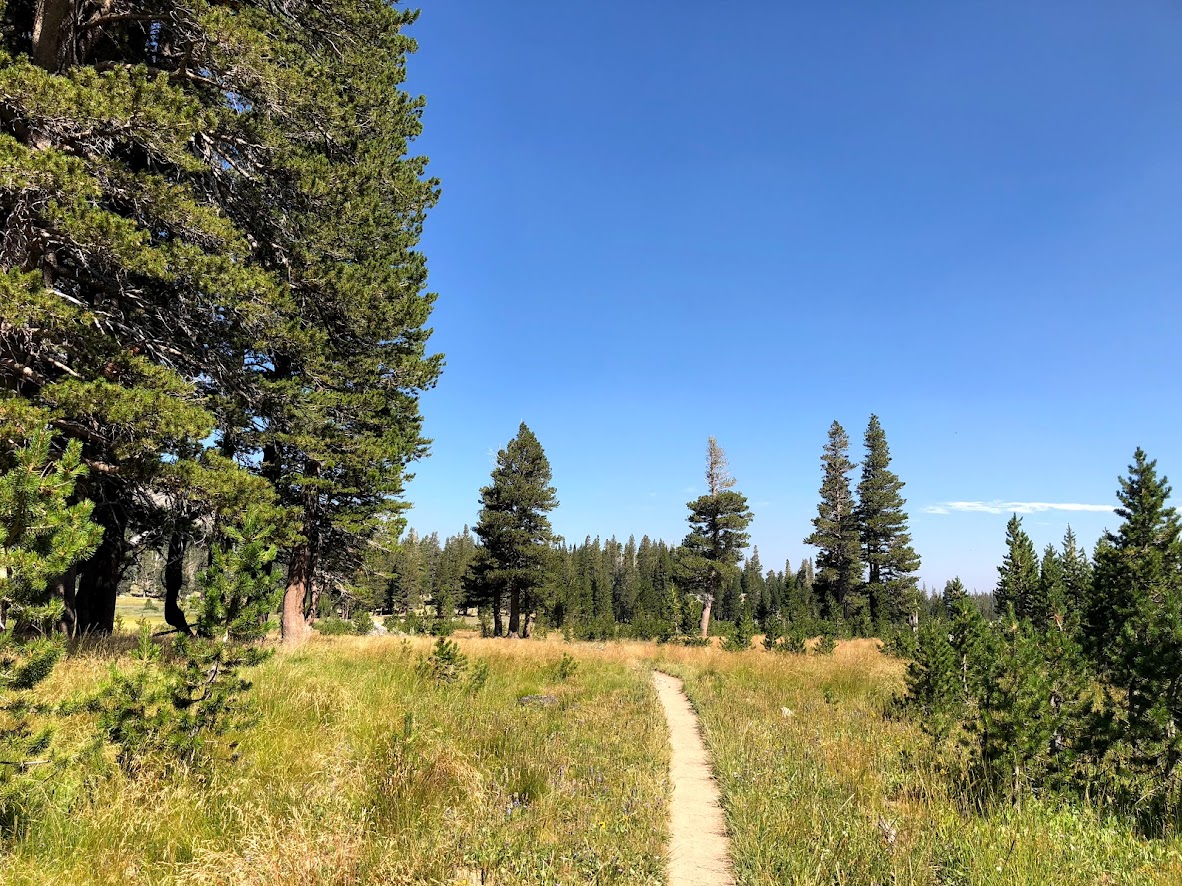 This (and most) sections of the PCT are beautiful.

I was enjoying my run along the Pacific Crest Trail so much, I didn’t pay close attention to my map.  I also assumed (wrongly) the turn off to the “Schneider Camp” trail would be obvious.  Definitely not so!  I ended up going about a half mile past it before realizing I’d gone too far.  I backtracked and carefully found the spot where the trail should be.  It still wasn’t very visible. 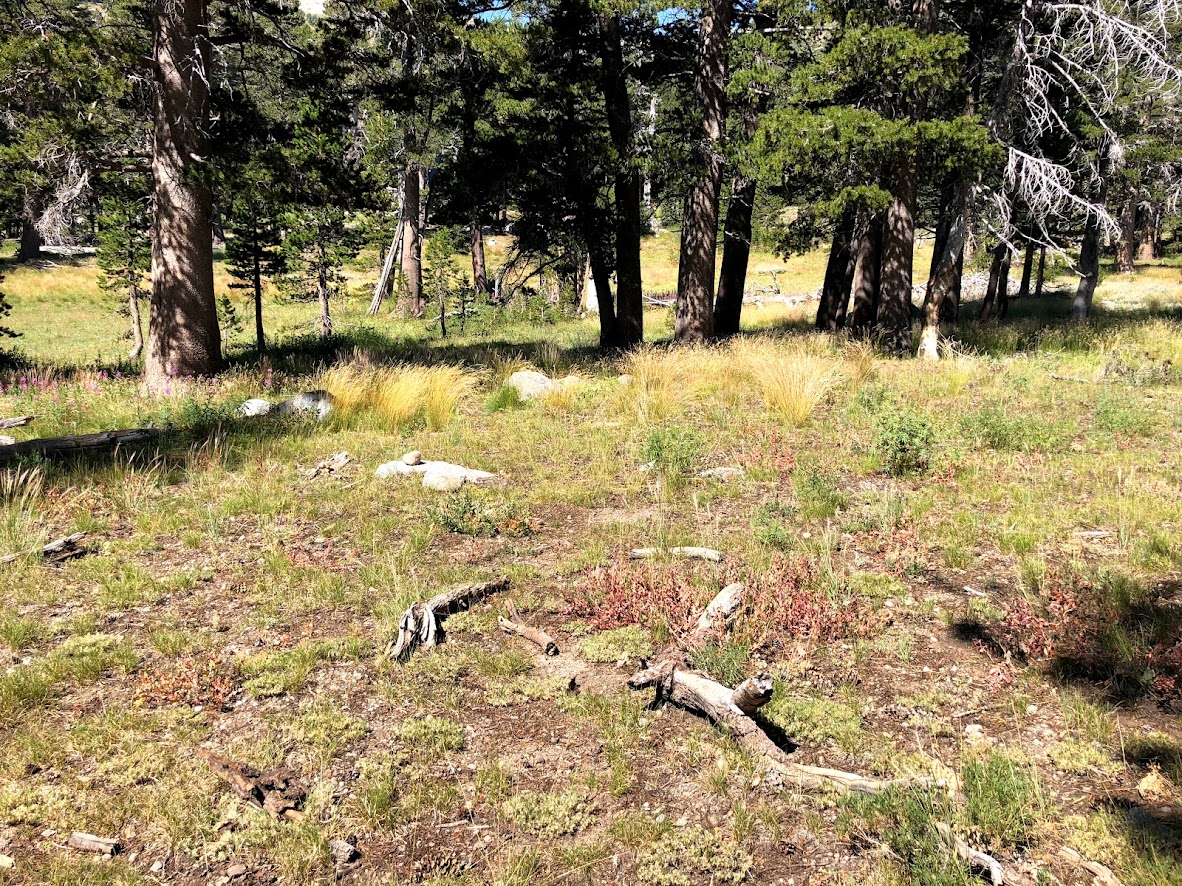 The beginning of Schneider Camp trail

Not really seeing the trail, but knowing it should be there, I started into it.  It soon became a bit more visible, then even started looking like a real trail. 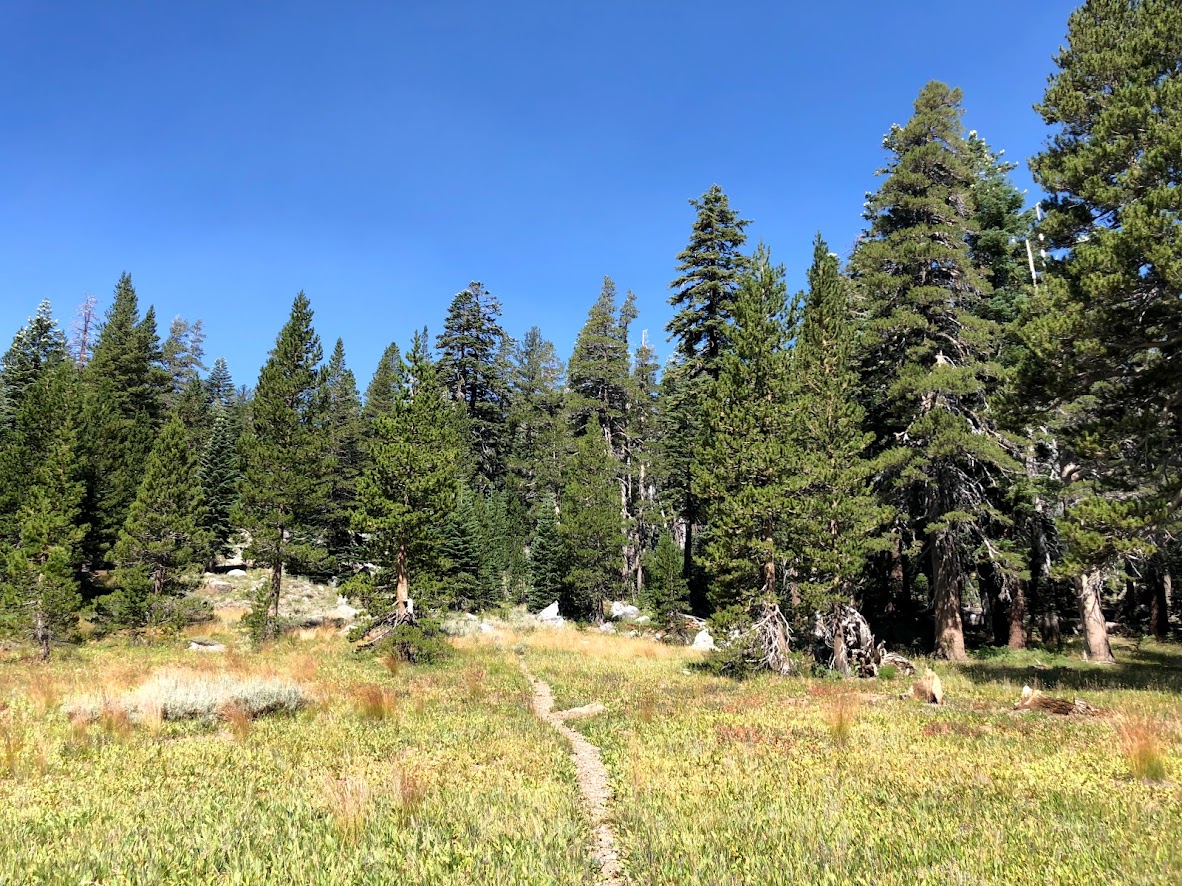 Near the beginning of Schneider Camp trail

It didn’t continue being a 100% obvious trail, however.  There were spots that were overgrown enough to make me wonder if the trail was still there. I’d proceed anyway and find out that it was indeed there.  I’d hate to try and navigate this at night. There’s a trail in there somewhere!

What had been pretty gentle climbing up to this point started getting a little more serious. The trail started gaining elevation.  It also started getting a bit loose.  It was loose rock and sand in a lot of places, so was a bit of a slog at times.  All in all not too bad, though.  Once I’d gained a bit of elevation, I turned around to enjoy the view.  Even through the smoke from the California wildfires, I was able to spot Red Lake and Stevens Peaks I’d summited the year before. 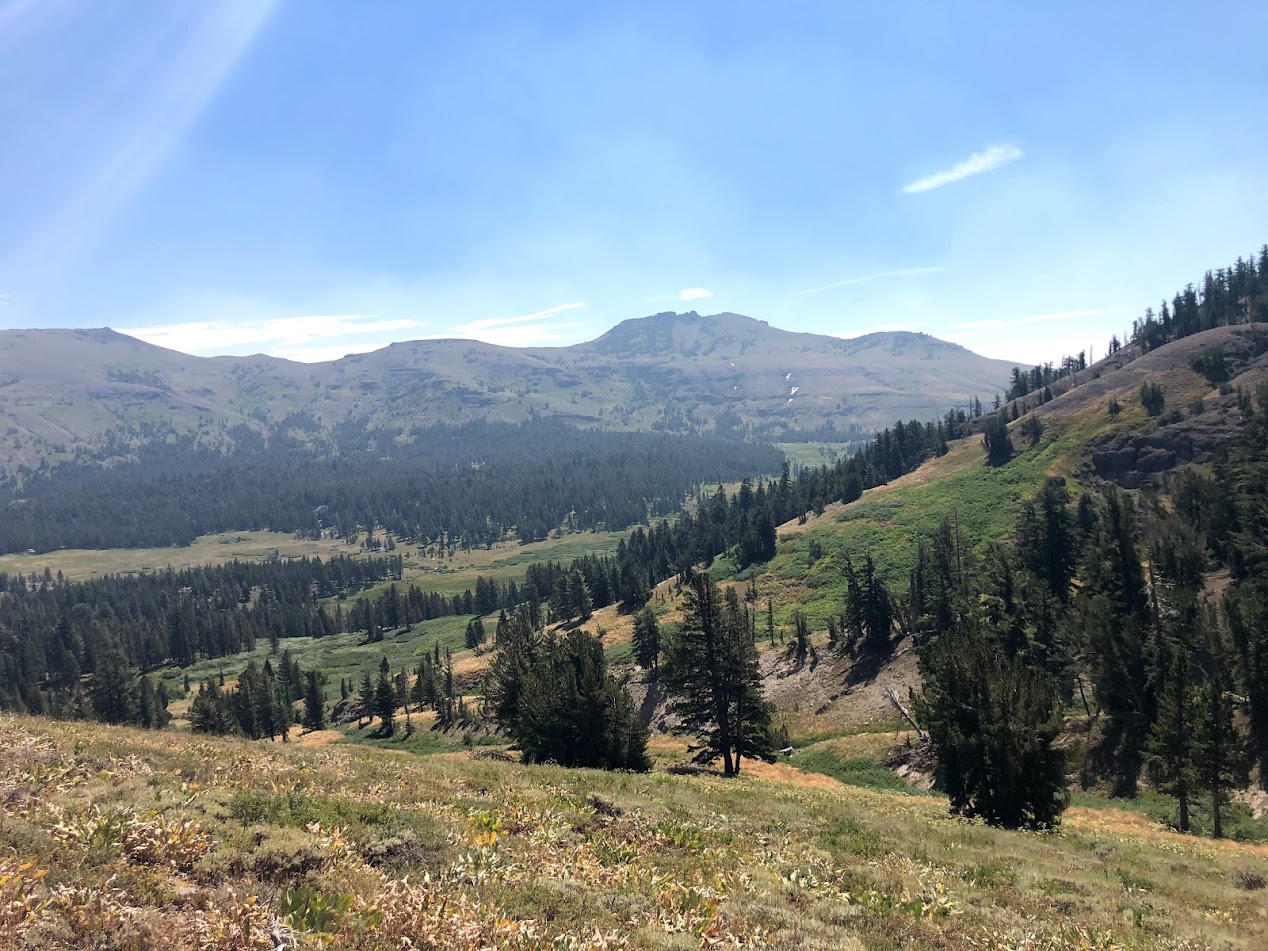 Looking across the valley towards Red Lake Peak and Stevens Peak

Before long, I reached the ridge where Little Round Top is, and proceeded off the trail to the north, following the ridge.  It had been a little bit breezy up to this point.  Now it was downright windy.  There was a steady wind of 10-20 MPH, with gusts probably around 30-40MPH, sometimes even higher depending on the part of the ridge I was on. 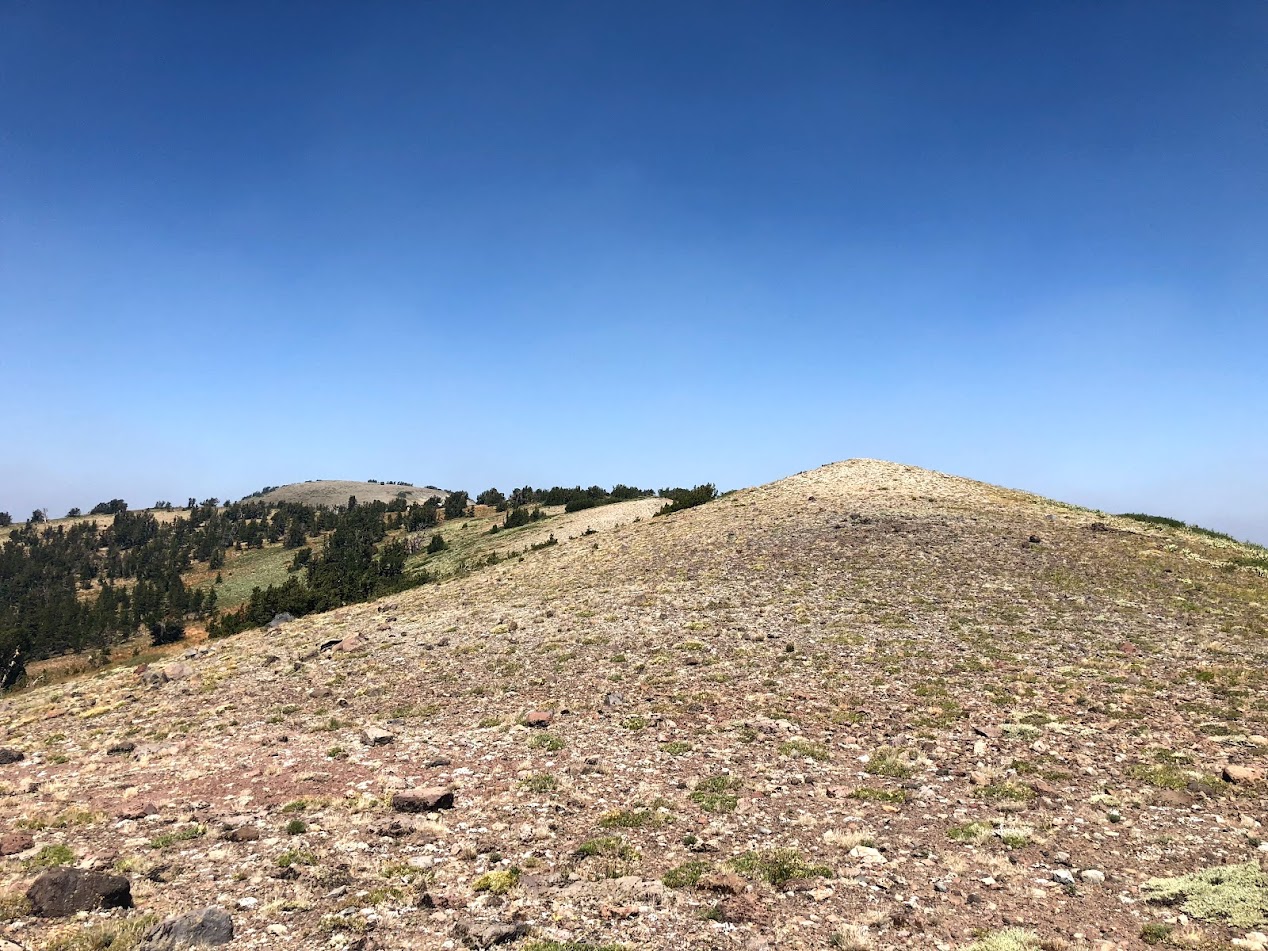 Starting up the ridge towards Little Round Top

Other than the wind, the ridge was easy enough to follow, though it felt a bit longer than it looked on the map! I tried to stay out of the windier parts of the ridge while still picking a good line around unnecessary climbs and thicker vegetation.  Before long, I was looking at the last bit of elevation to be gained. 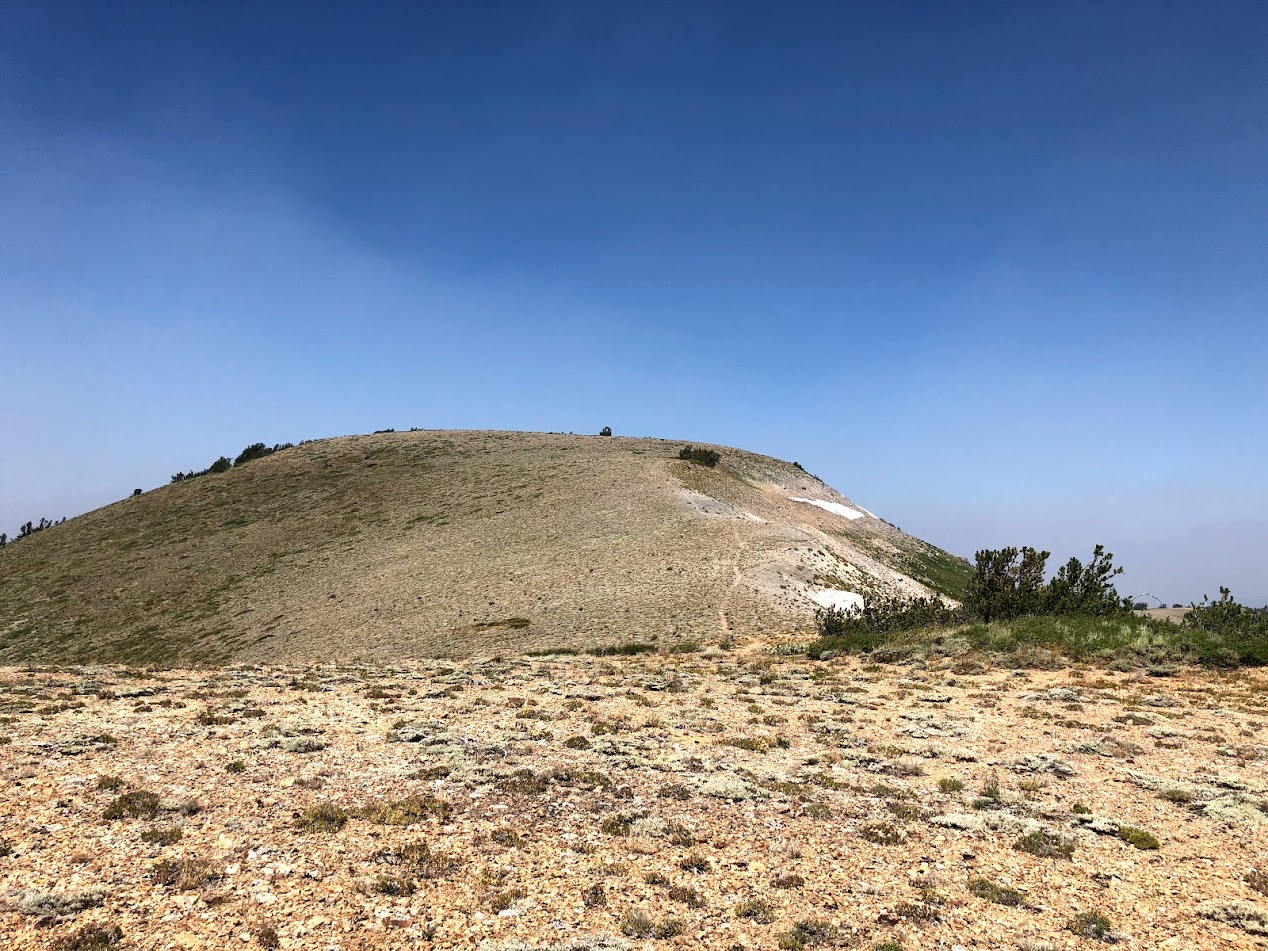 Final climb up Little Round Top

Before getting to the summit, I tried one more time to see if I could spot Lake Tahoe.  No such luck: too smoky.  Maybe next time! 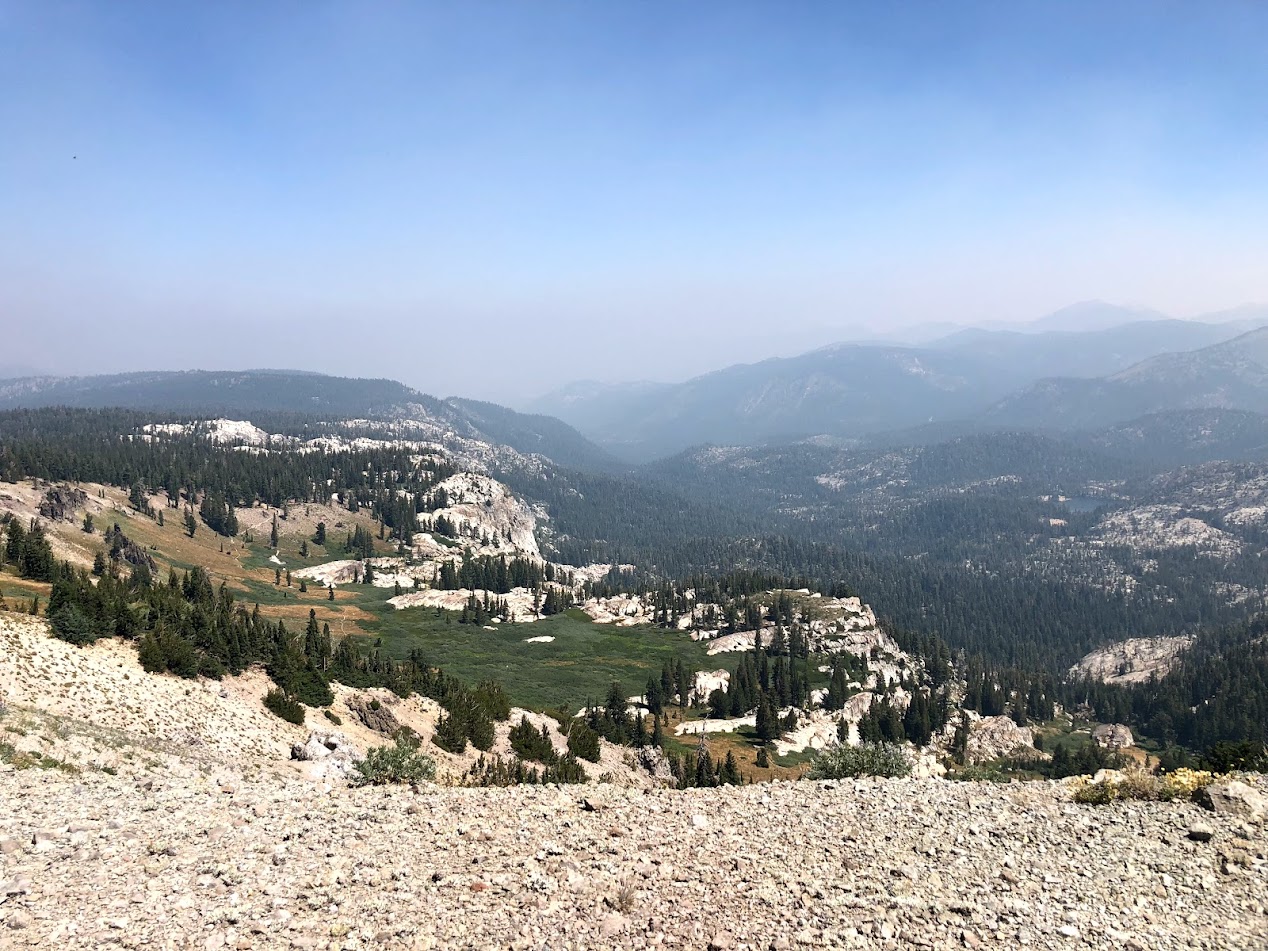 Approaching the summit after a slightly steep climb, it begins to round off.  A group of rocks at the high point of the summit begins to become visible.  It’d be a great little spot to camp sometime! 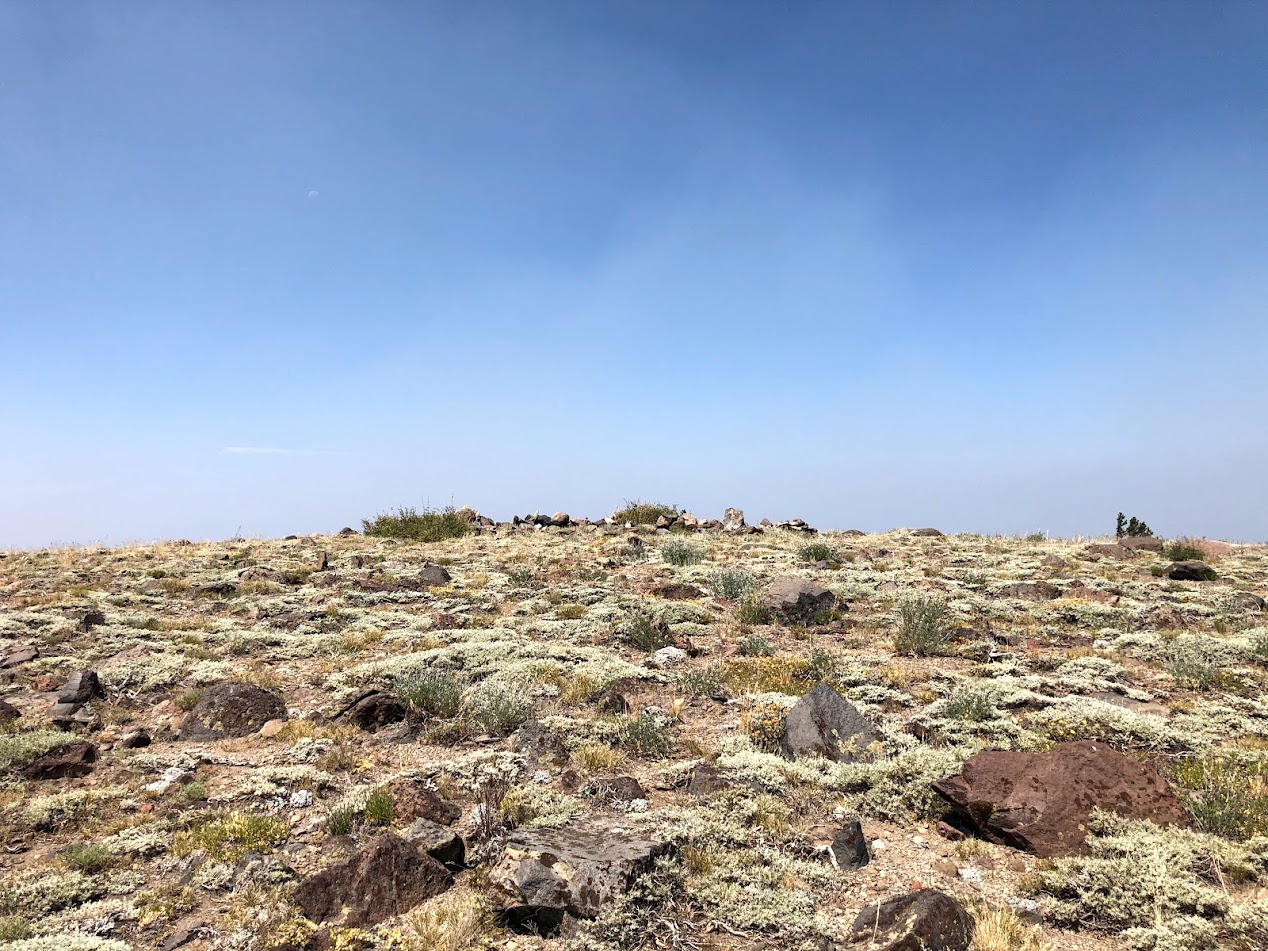 Approaching the summit of Little Round Top

Arriving at the summit, one can see that it is indeed a little round top.  It’s almost hard to definitively say which part is in fact the highest.  I looked around for a few minutes, then decided to set up my vertical antenna right in the middle of the summit, where the rocks were.  The shape of the summit seemed to be deflecting the bulk of the wind up and over me.

I kinda wish I’d known there were trees on this summit (even though they’re pretty short).  Only able to bring one antenna in my trail-running kit, I’d brought the tri-band vertical, thinking this was a bald summit.  Even if it wasn’t, I’d still be able to operate.  As I previously mentioned, the center of the summit seemed to be pretty wind-free.  Then I set up my antenna.  Apparently the gusty winds weren’t very far from the surface at all!  The wind was really testing the limits of my setup!

QRPGuys Tri-Band Vertical antenna set up in the wind

I got the antenna up and started calling CQ.  Right as I started getting answers, my antenna collapsed!  Before transmitting back, I quickly jumped up and got it vertical again.  The guy lines were pretty strained, with the leeward line getting pretty slack. I tightened everything as much as I could and got back to making contacts.  It started out with a summit-to-summit with one of my regular chasers, Phil NS7P.  He was up on Wolf Mountain, W7O/CM-031.  This wasn’t a big surprise, since he’s also a Mountain Goat but it’s always nice to get summit-to-summit contacts! 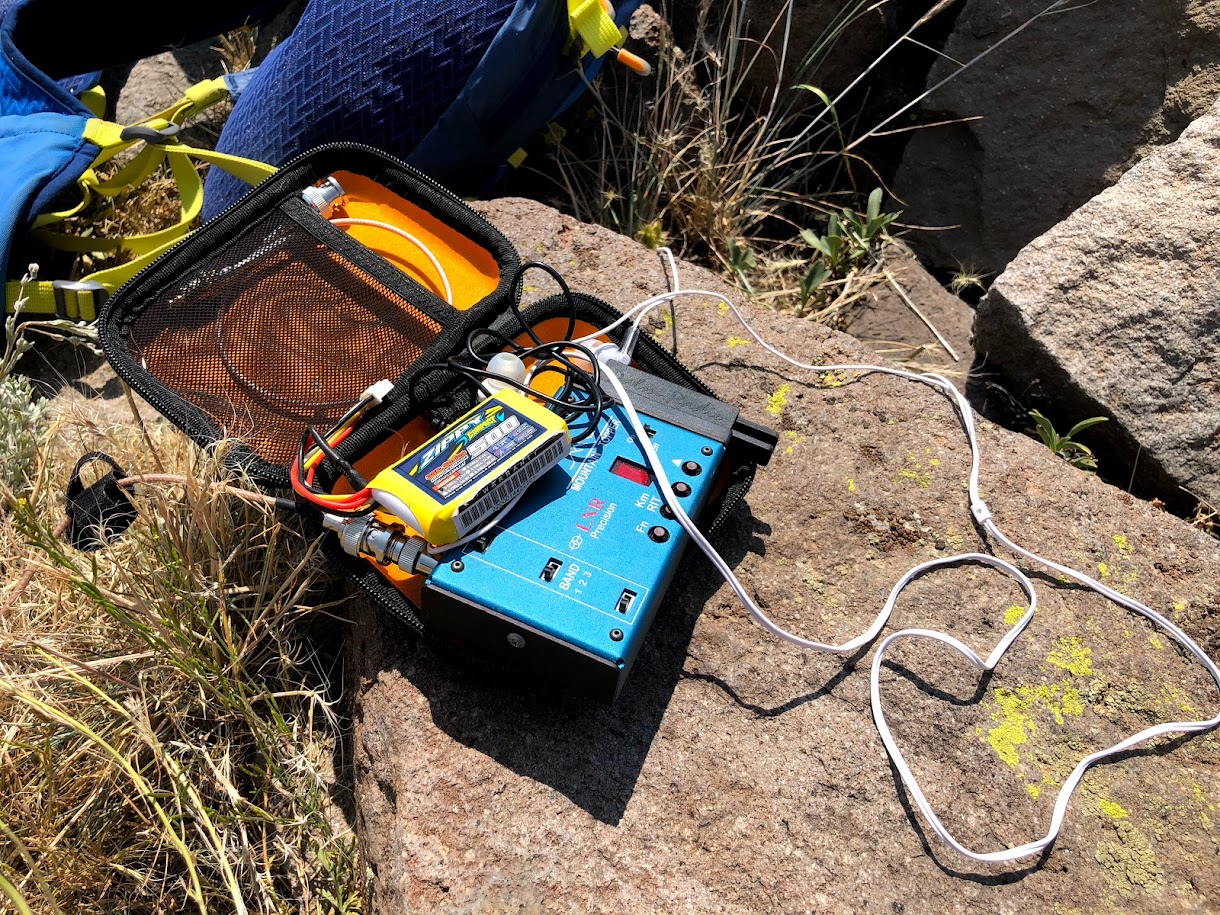 I proceeded to get several more contacts on 40 meters.  Once that went quiet, on 2 meters I called for Jaime N6JFD, who was with Jeff AA6XA over on another nearby summit. They were in the middle of a multi-summit day!  I got the S2S with Jaime and asked him to post a spot (using APRS) saying I wouldn’t be doing 20 meters due to the wind.  We chatted briefly, then I packed up.  As I was leaving the summit, I heard Jeff AA6XA on the HT. I was back in the wind, but we managed to make the contact for another S2S.

The trip back down was pretty easy—still quite windy on the ridge, but no big deal. The loose trail on the steeper downhill sections was kinda nice, since it was soft.  It made for quite a pleasant run back. 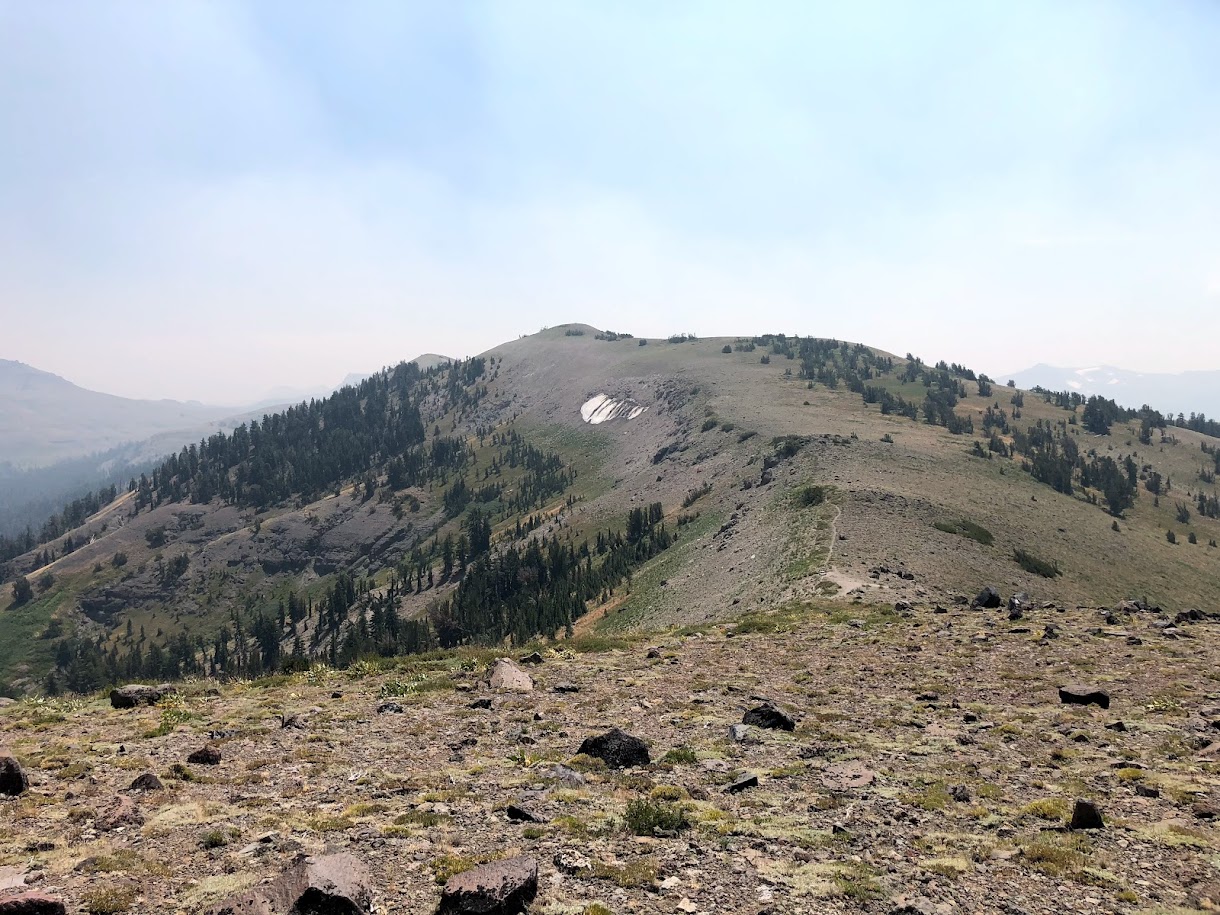 A bit more smoke on the way back