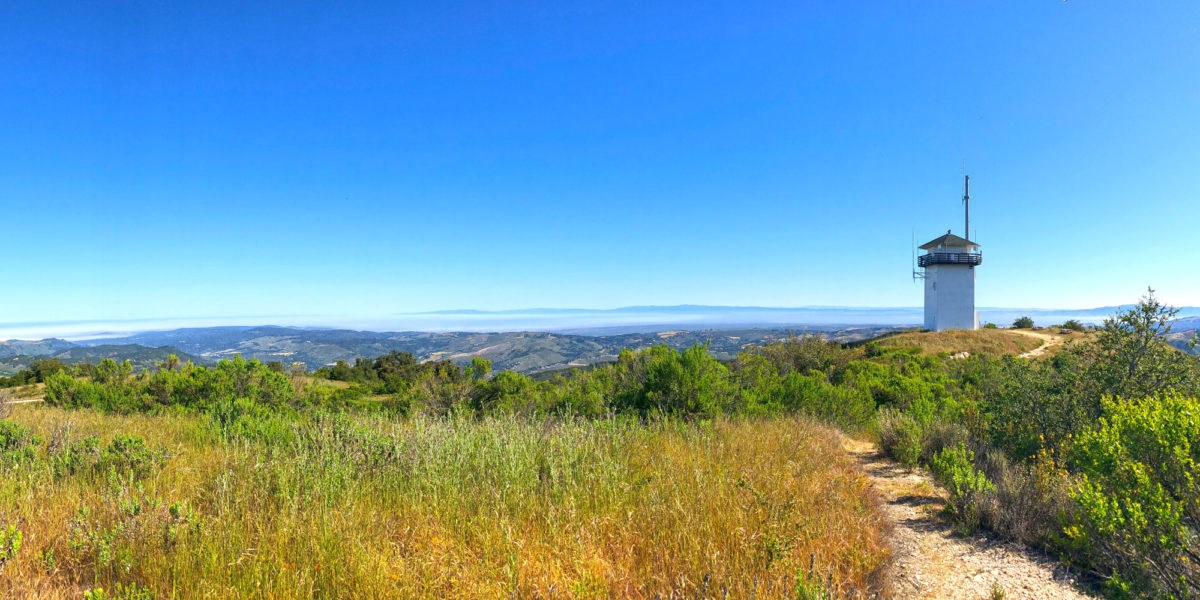 Almost exactly a year after first attempting this summit, I came back. Last time, it defeated me. Not this time!

Almost exactly a year after first attempting this summit, I came back. This time, I had an HF radio with me, so the excessive VHF RF and isolation on the summit would not be an issue.  Last time, I ran with one friend. This time, I brought along 3! And more dogs, too!  So I’d have less time for the activation as a result. Oh, and it was hotter, as well!  In the time since I’d last attempted the activation, my SOTA friend Jeff AA6XA had managed to get out there and get first activation on this somewhat obscure peak. Now it would be my turn!

As with last time, we started this run at Carmel Valley Ranch.  It’s a great place to start, and even though it’s a gated property, they seem open to visiting hikers/runners. You’re on Old Ranch Road when you drive into the Ranch. Stay on it as it winds through the property, then turn right on Oak Place Lane.  Toward the end of this road, there’s parking. The trail starts up behind the buildings on the left. We were there early in the morning, so we made sure to keep really quiet when following the path up to the trail.  The buildings are suites and some of them were occupied with sleeping people (or so it seemed).

As with last time, we took the “Huff n’ Puff” trail up to Snively’s Ridge and followed that to the top. You can see my last post for details on that. 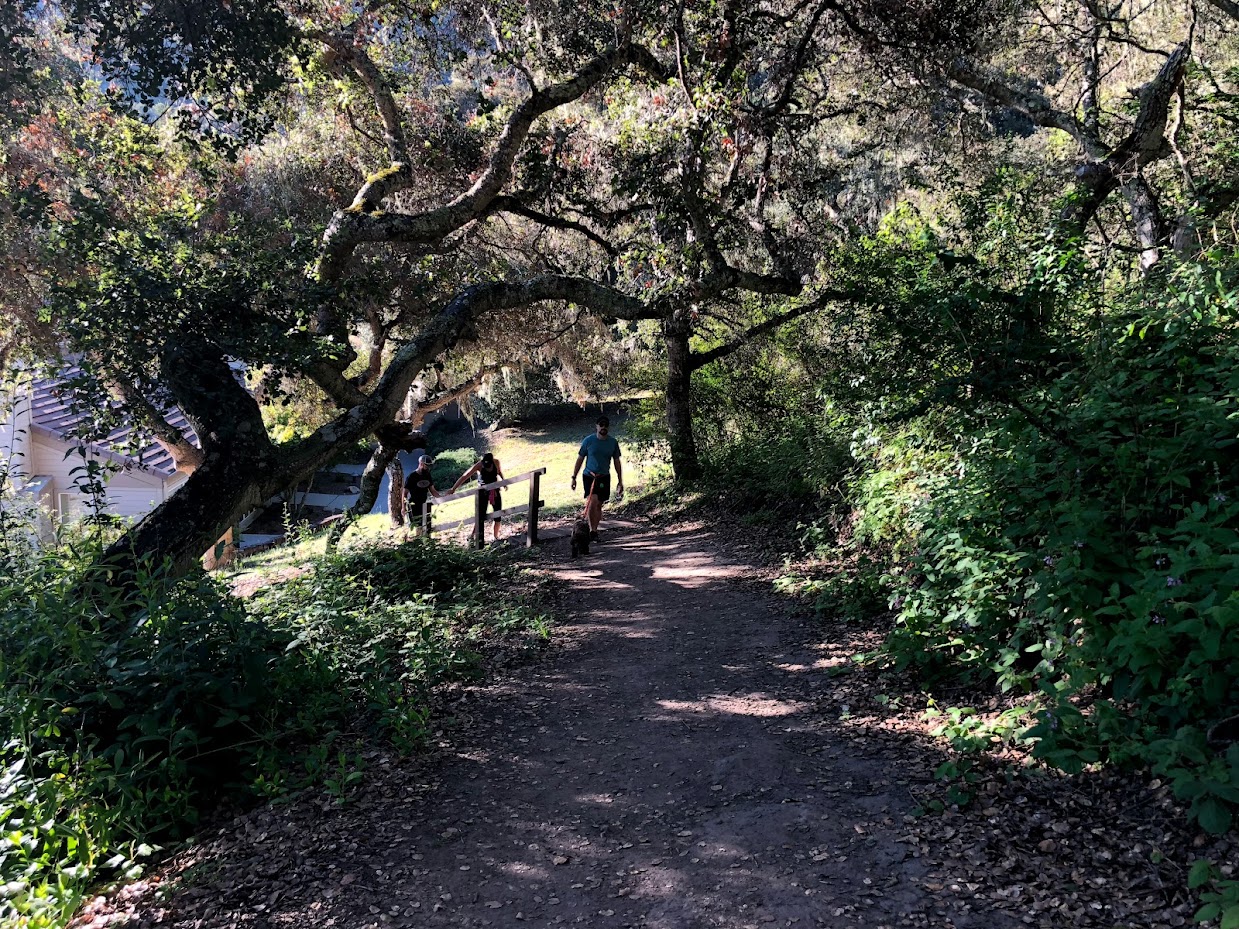 Getting started on Huff n Puff

It was a hot day, and I’m not in super tip-top shape. So there wasn’t a lot of running up this one, even though we were on a “trail run.” But before long, the summit was in sight and the views were great. 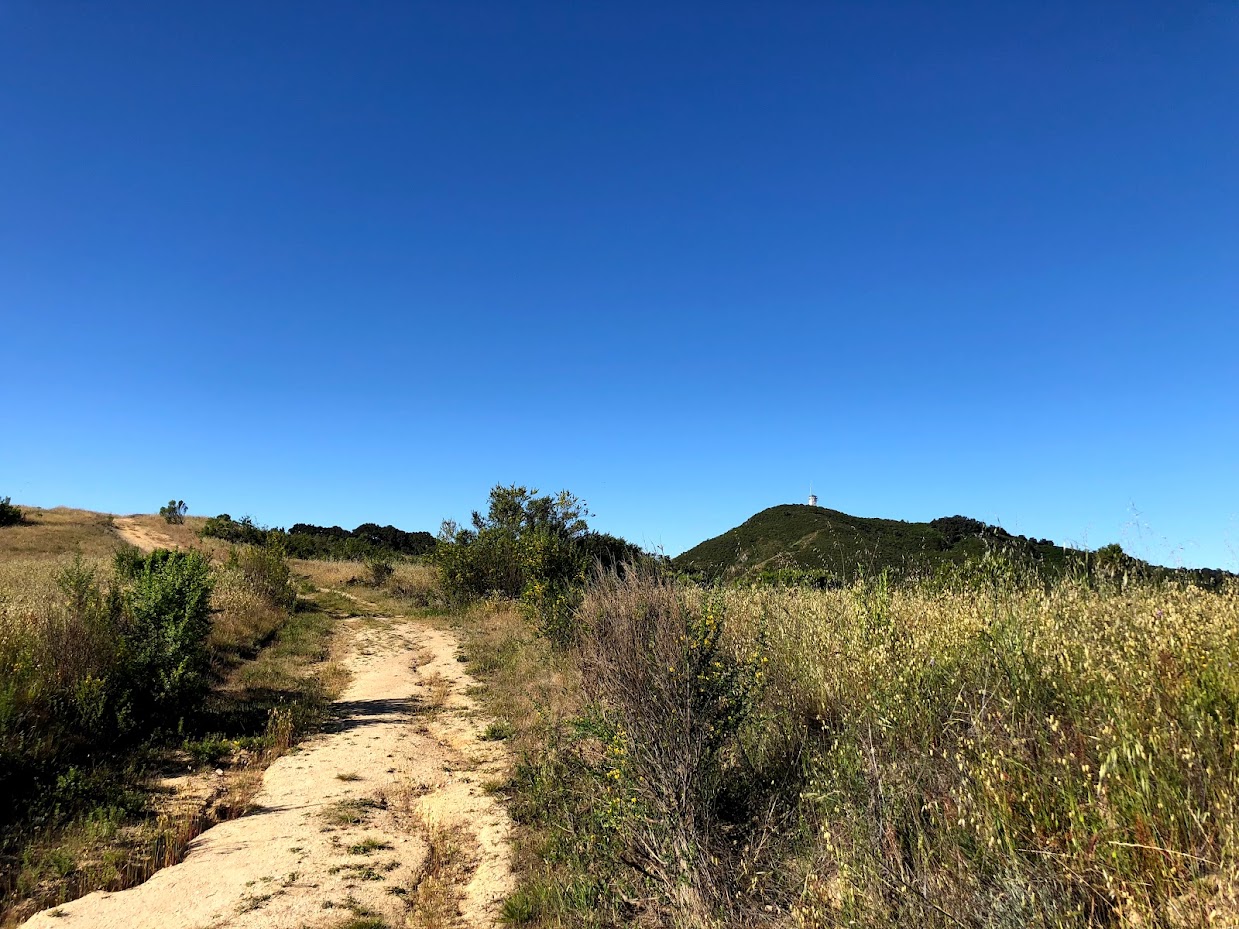 There’s a little flat sub-peak at the top of Snively’s ridge. This is where you turn right to follow a use trail over to Pinyon Peak. 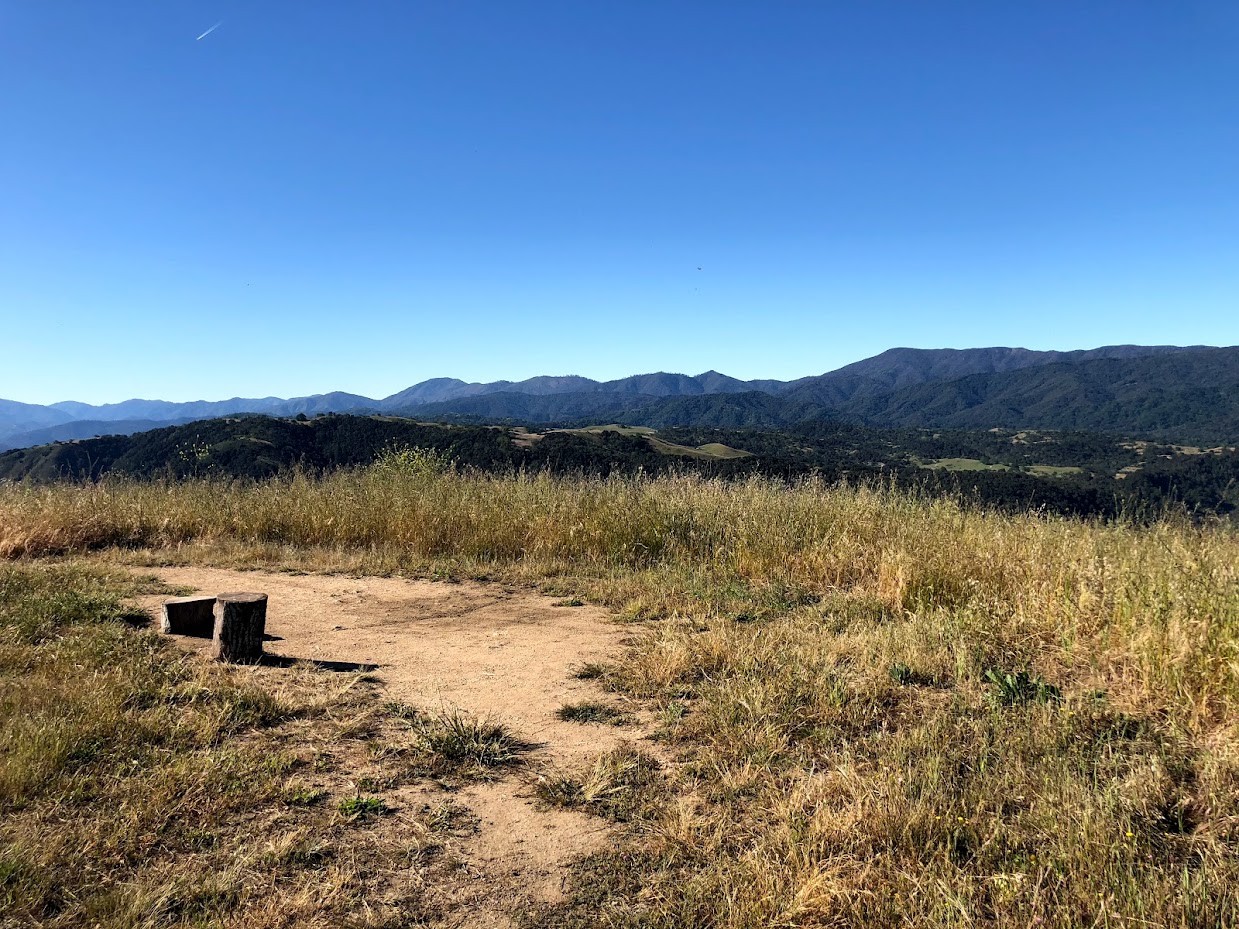 This use trail starts out in the open, but soon goes into the woods. The view along the saddle between the two peaks is quite stunning. Last time I did this summit, it was all in the fog. 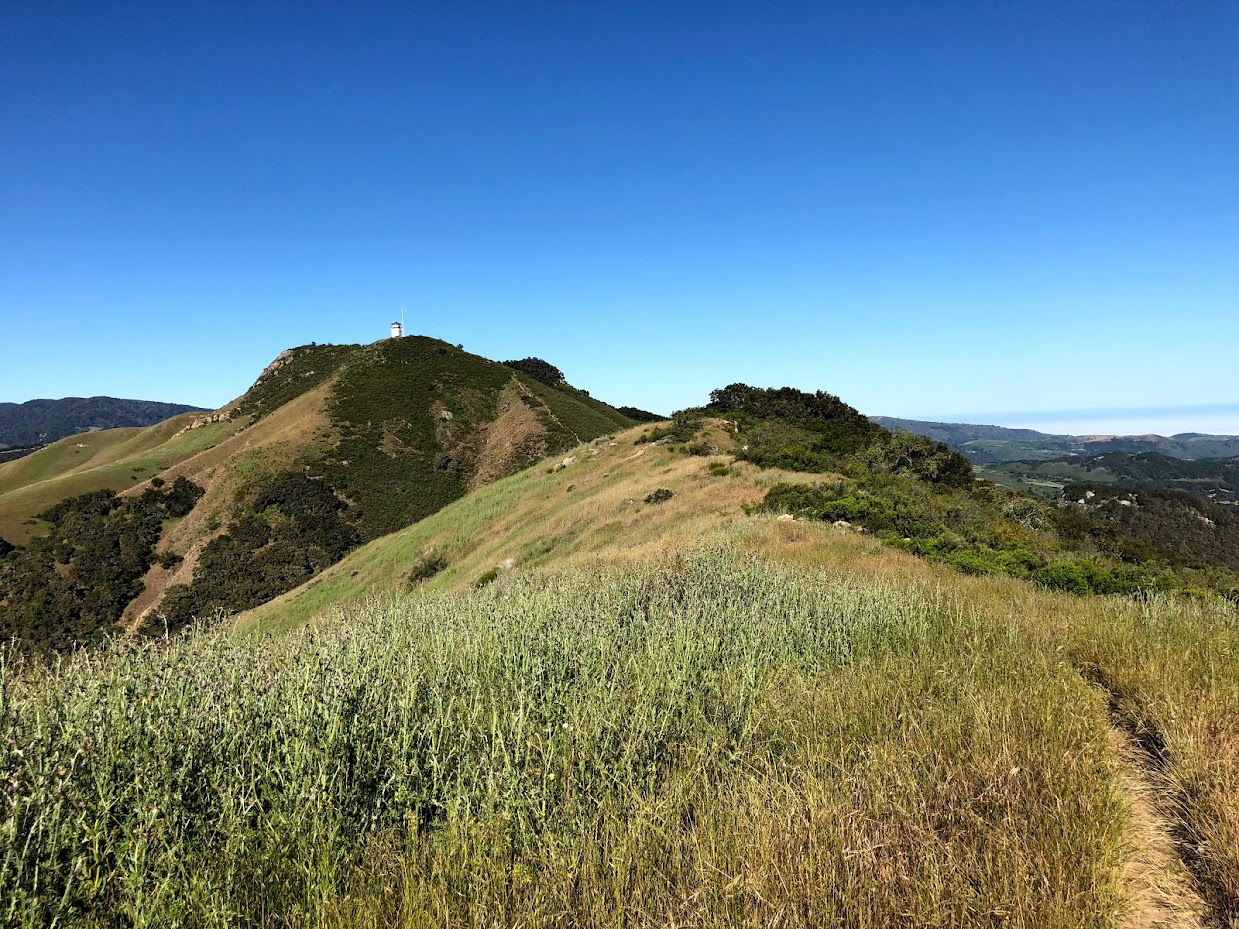 Looking over the saddle towards Pinyon Peak

Once the trail goes into the woods, you’ll really have to watch out for poison oak. It’s all over the place. I don’t get a reaction, but I always try to avoid it anyway – I don’t want to transfer its oils anywhere else. 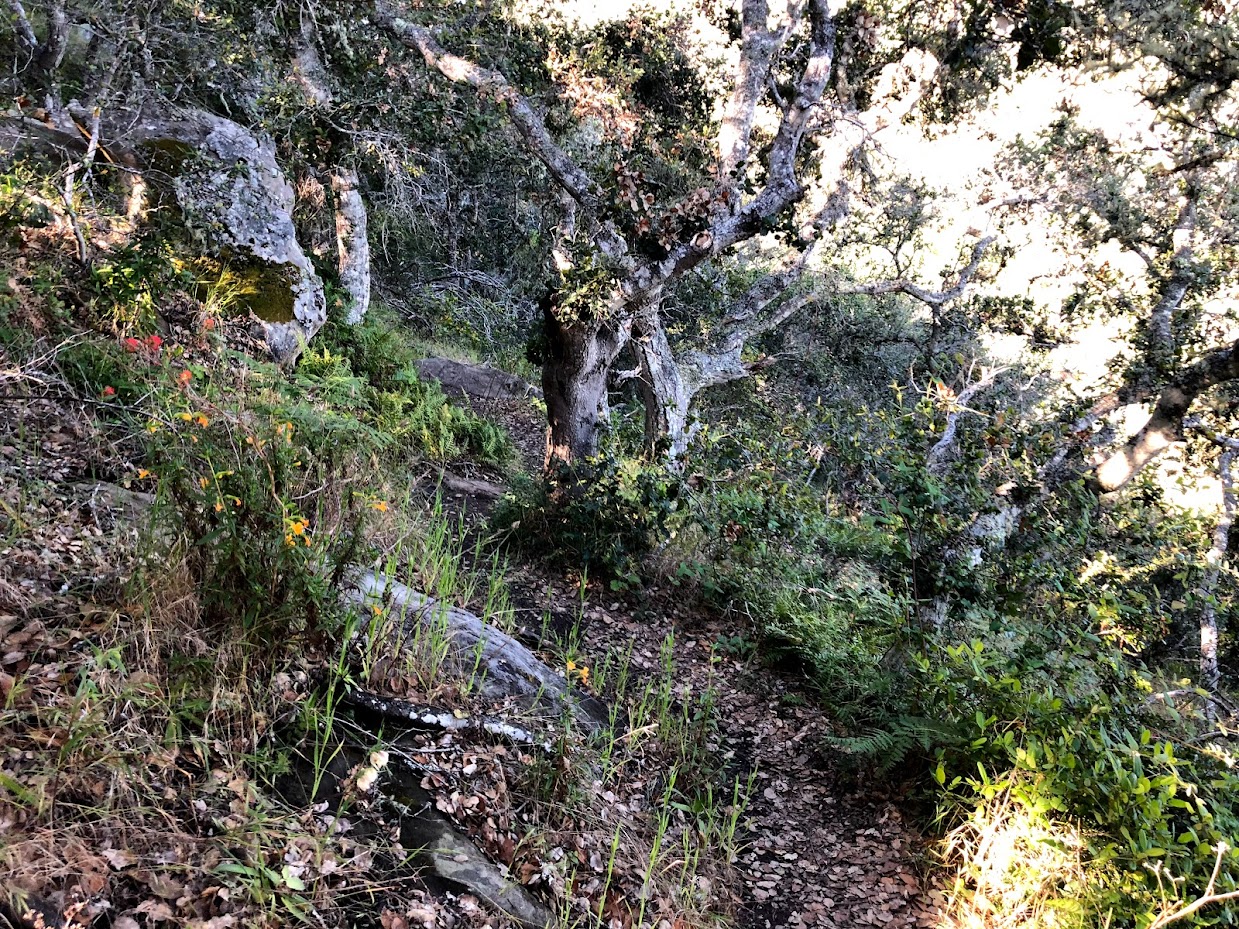 Going through the woods towards the saddle

Emerging from the woods, you’ll see an antenna on top of the tower that’s on the summit. 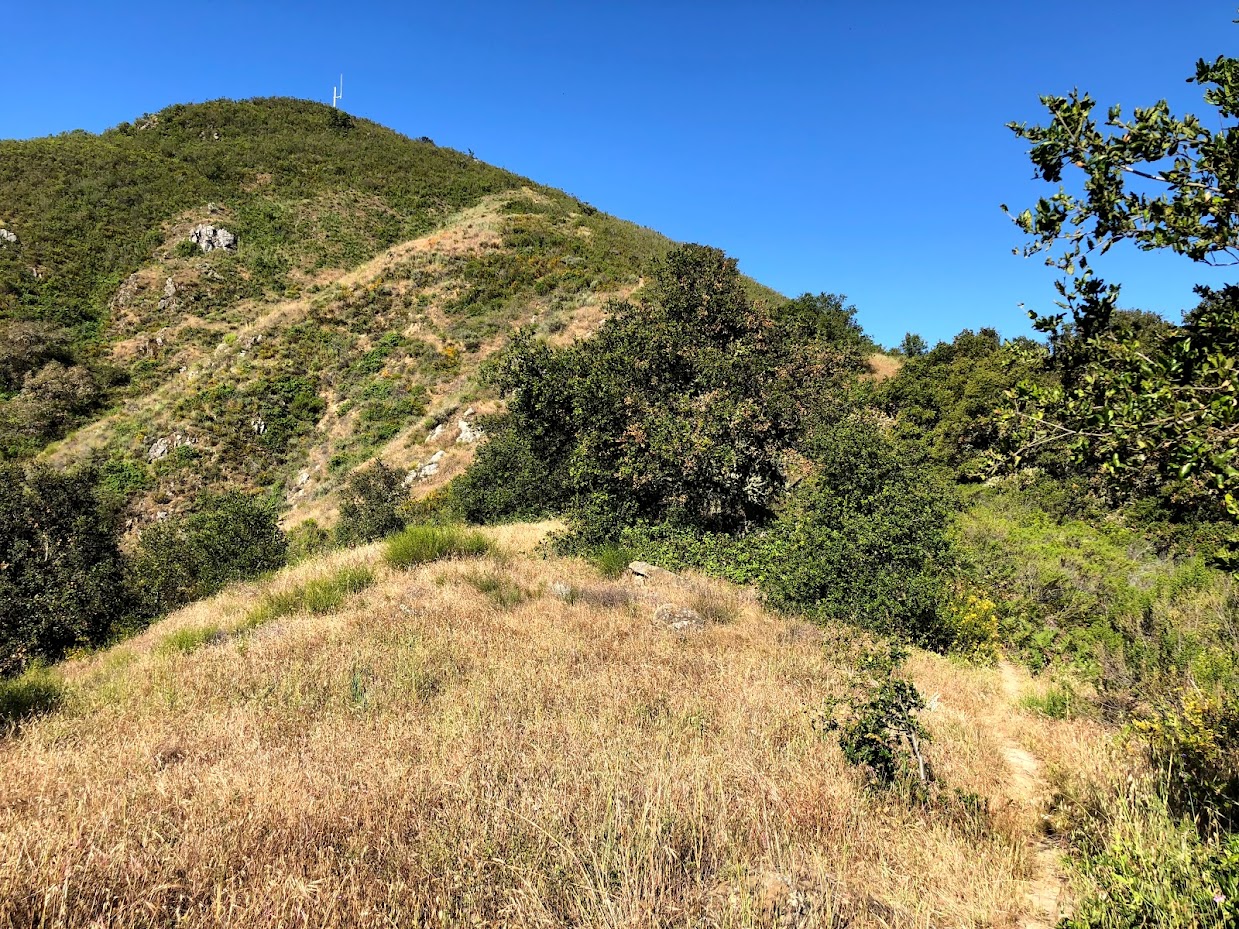 On the saddle, getting ready for that steep climb!

It’s a pretty steep climb up to the summit from here. We had to pause to let the dogs have a breather a couple of times, since it was pretty hot.  Before long though, you’re on top! 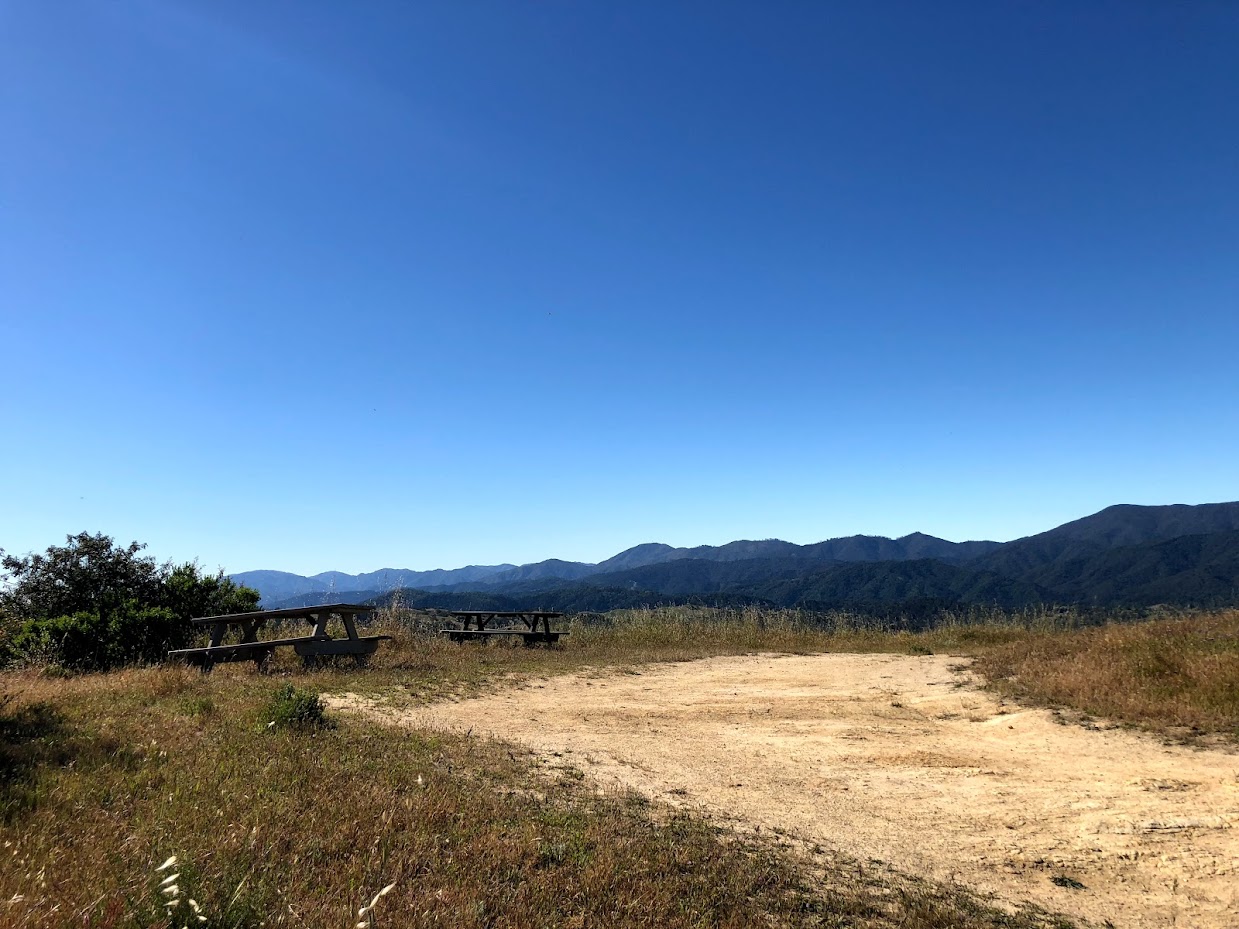 At the top of Pinyon Peak – picnic tables!

There’s actually a slightly higher part of the peak past where the picnic tables and tower are.  I took a minute to go stand on the high point, and took a picture of the tower and surrounding area. 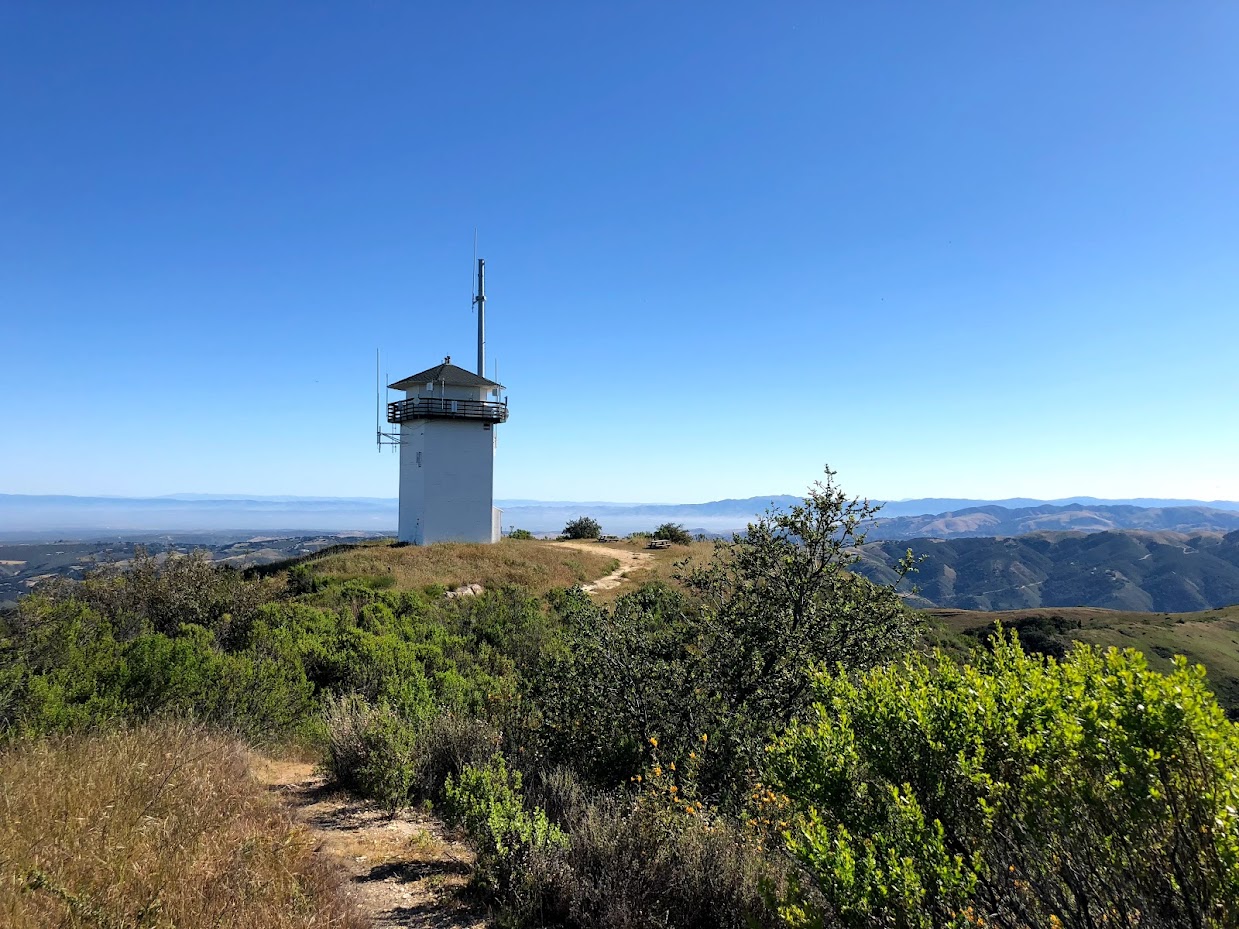 Looking NNE toward the lower part of the summit

It’s hard to capture the beauty of the views from the summit, but it’s pretty expansive. If you look carefully you can see Monterey Bay to the north.

A panoramic shot from the summit of Pinyon Peak

Not wanting to waste any time, I ran back to the picnic-table area and started setting up.  I knew my friends would enjoy a break, but not too long of a break!  It was hot up on the summit, with very little wind.  They actually went and took refuge in the shade of the tower while I operated at the picnic tables, in the sun. 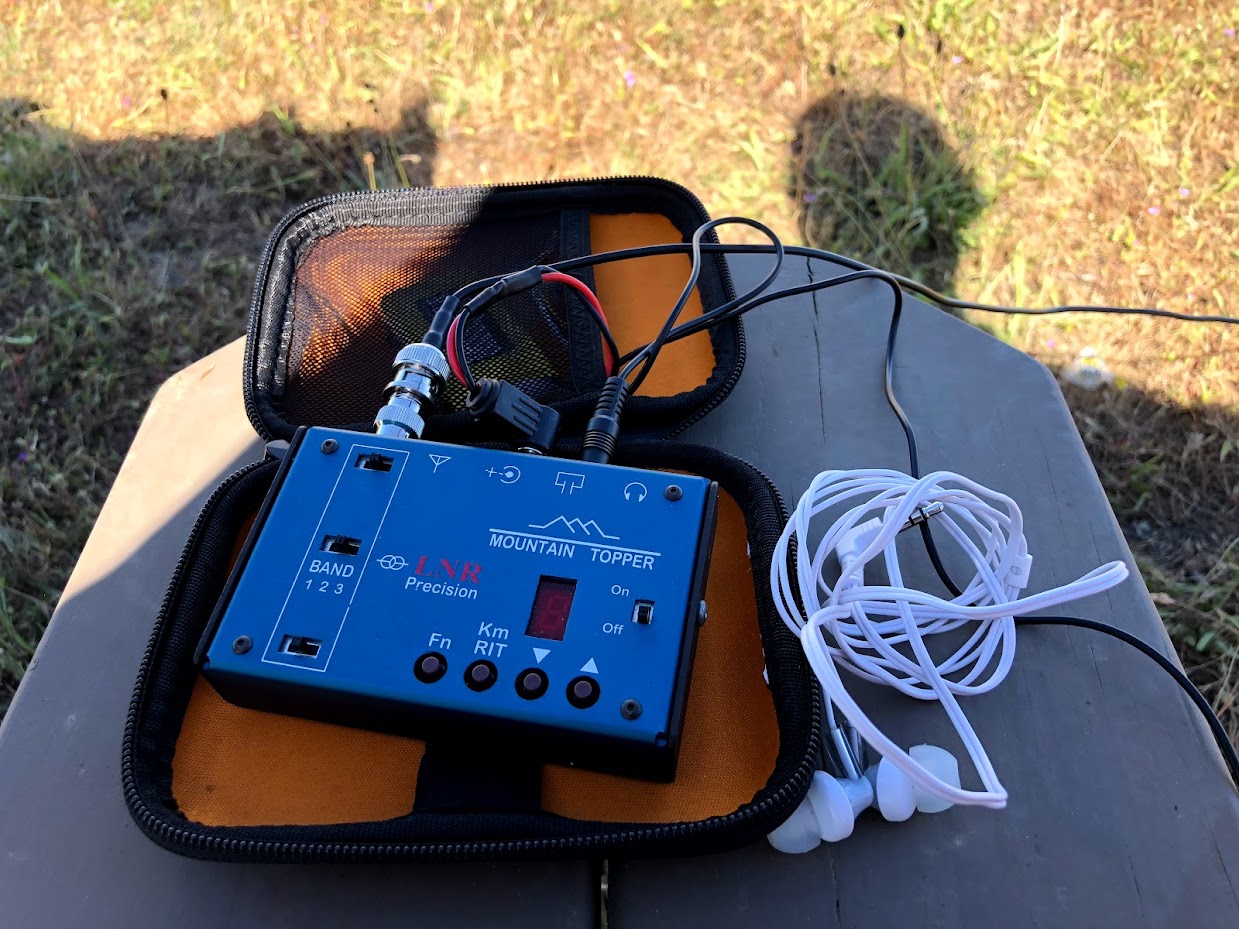 The antenna I used for this outing was the QRP Guys Tri-Band vertical. 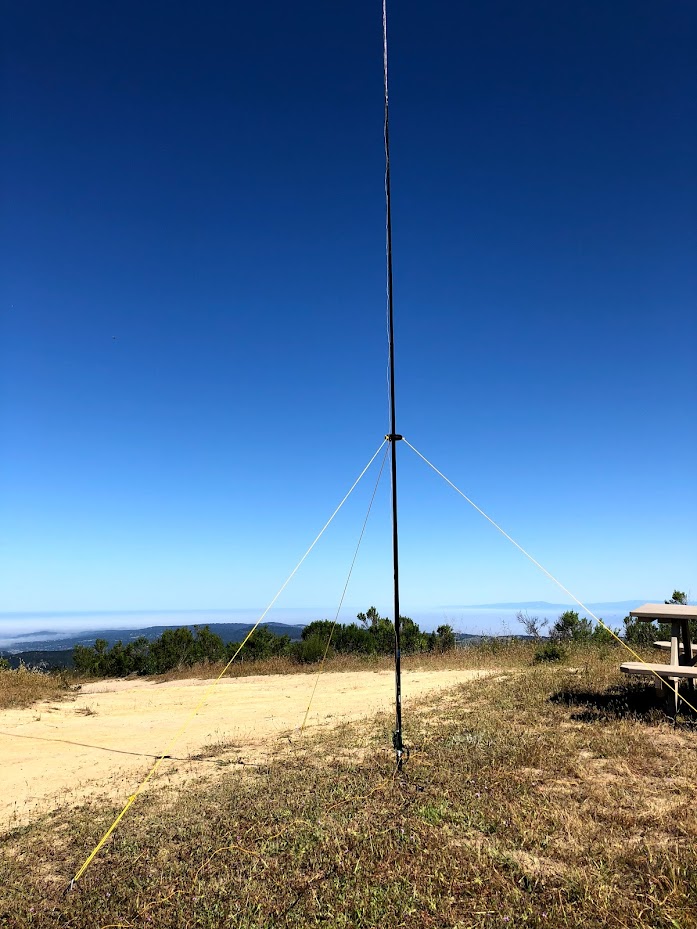 I didn’t fully realize it at the time, but I had a bad coax cable going to the antenna. It would mostly work, then cut out quite a bit. I was getting and giving erratic signal reports and I just figured band conditions were funky.  I discovered the bad coax later on.  Nonetheless, I quickly rolled through the contacts, including one S2S with Phil, NS7P.  I only operated on 30m, and ended up being on the air for only about 12 minutes.

I was hot and ready to head back and so were my friends and the dogs!  But I was very happy to have had a successful activation this time around.