I made this summit harder than it needed to be. I was here to do some backpacking with my son, so I had a 50-pound pack. I decided to take a shortcut that ended up making things harder. We even had a rattlesnake encounter! Still, we had a good time overall and made it to the top of this remote peak.

This summit hadn’t yet been on the air, and I’ve been wanting to activate it for quite a while. I made this summit quite a bit harder than it needed to be. It’s an 8-mile round-trip if you’re just going to the summit and back. However, I was here to do some backpacking with my older son, Miles, so I had a 50-pound pack on. Also, I decided to take a shortcut that ended up making things harder. And we had a rattlesnake encounter! Still, we had a good time overall and got it done.

Laguna Mountain is a pretty remote summit. Getting to the trailhead involves about 30-45 minutes of driving on a twisty (but paved) road from the nearest highway.  There’s mostly no cell service in the area.  One thing that’s nice about this hike is that the trailhead is a small campground. If you wanted to (assuming an available spot), you could camp there a few days and do several summits in the area.  Also, there’s a pit toilet right there at the trailhead—those always come in handy after a long drive.  Parking is free in the small lot.  From what I can tell, it doesn’t ever get really crowded.

Normally, I’d have a shot of the trailhead, but it looks like I forgot. It’s just a big yellow gated fire road. Can’t miss it.

This hike starts out quite easily. It’s a fire road with a mostly gentle grade. There are steeper sections here and there, but nothing too crazy. A short way up the fire road, we passed the trail we’d taken last year. It goes to “The Gorge,” where we camped last year, and where we’d be camping this year. We’d be taking a different route this time. 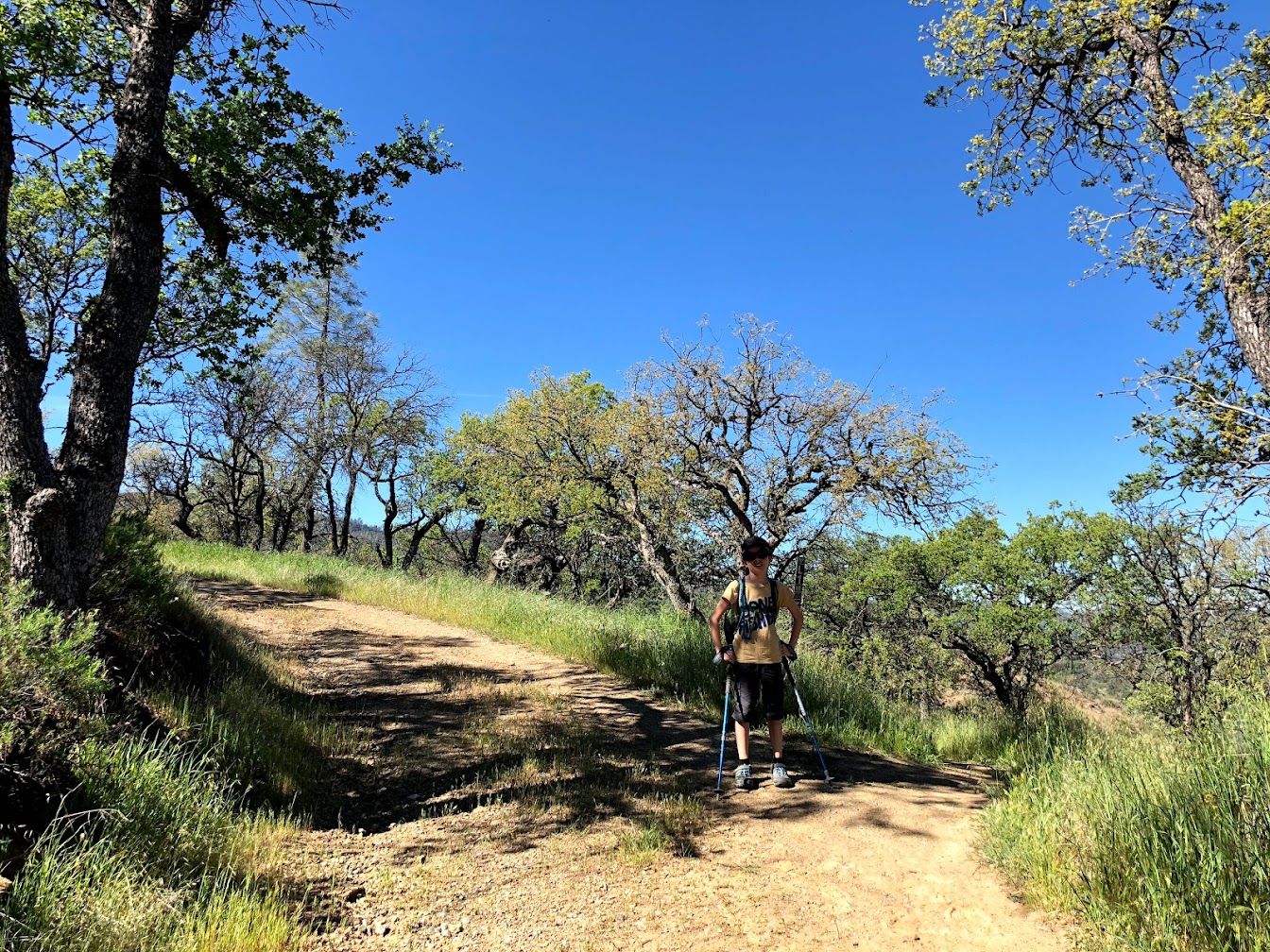 A little further up, we got our first glimpse of Laguna Mountain from the trail.

There it is! Contrails pointing right at it.

Miles has a slower pace due to his size, but he’s a great hiker!  This was pretty nice, since I was carrying a 50-pound pack and it was already starting to get a bit warm! 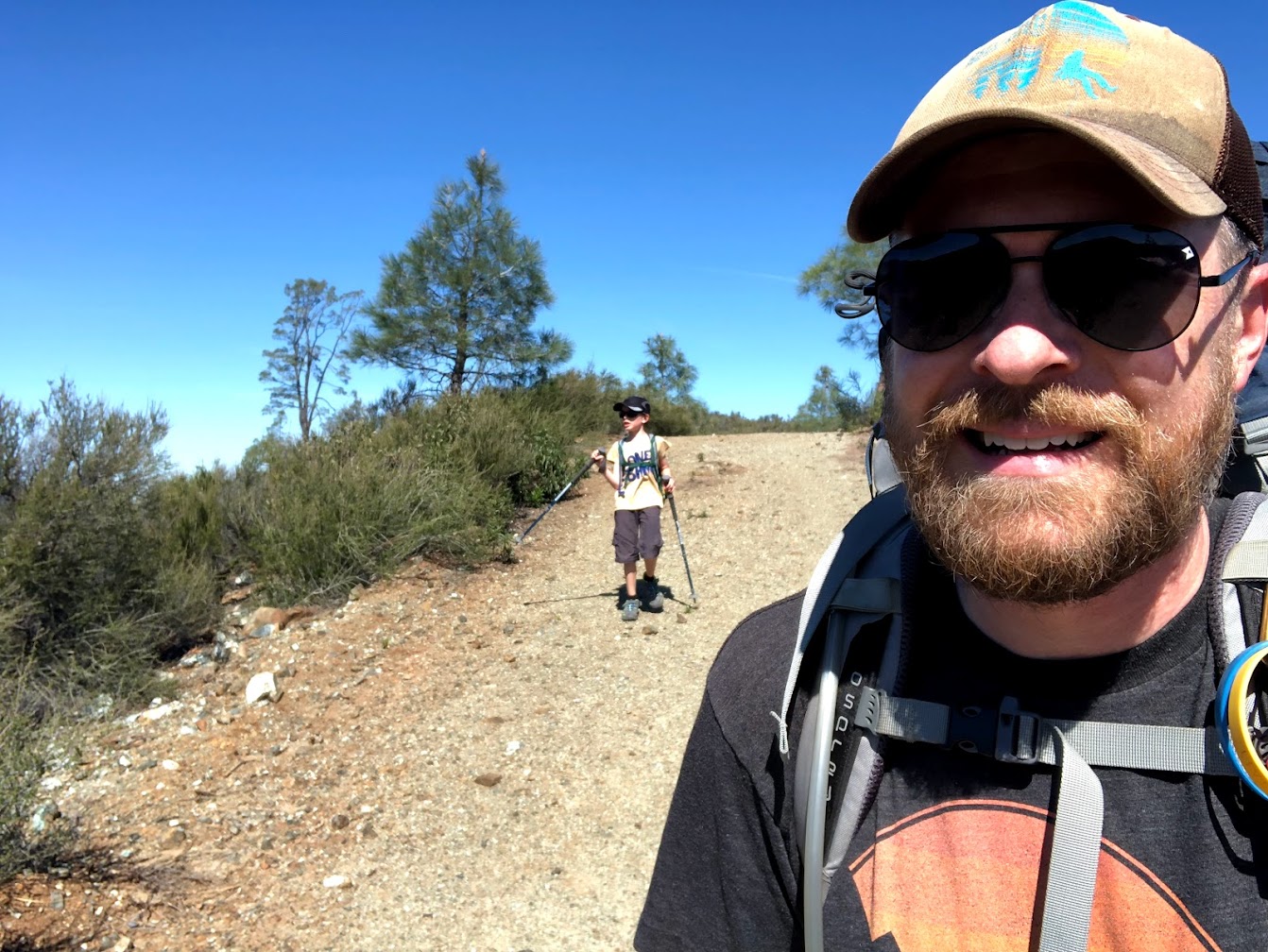 Enjoying the views on the way to the summit

The fire road follows a ridge and as such, tends to go up and down a bit, rather than just up.  For the most part, the downhill sections were pretty minimal, so didn’t add too much to the overall elevation gain. 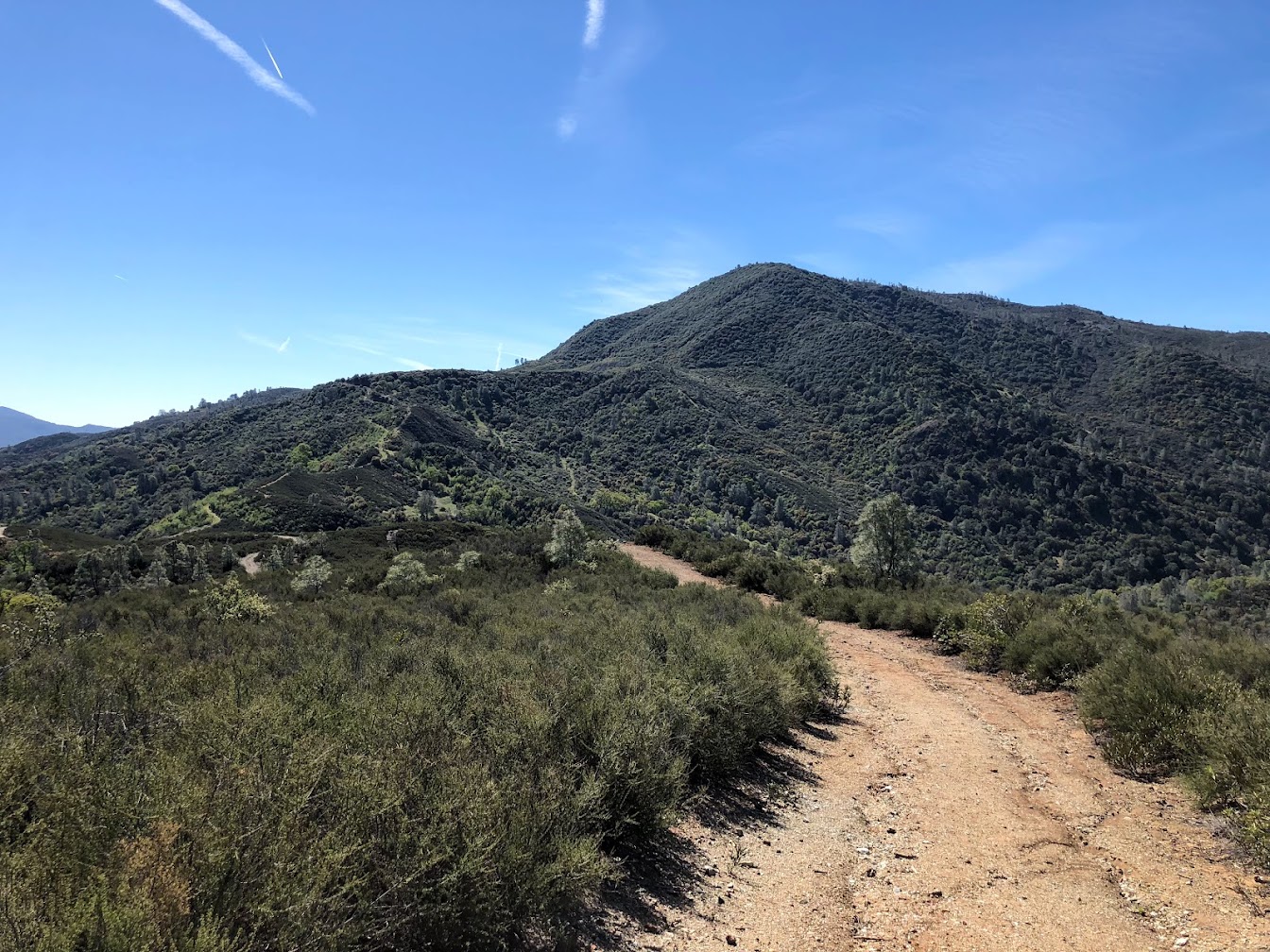 One of the downhill sections

Getting closer to the summit, the fire road starts to get a bit more overgrown, but still quite easily traveled. Just watch out for critters!  We didn’t run into anything dangerous or annoying (like ticks) at this stage, but we did see some really cool lizards, including a couple of horned lizards! 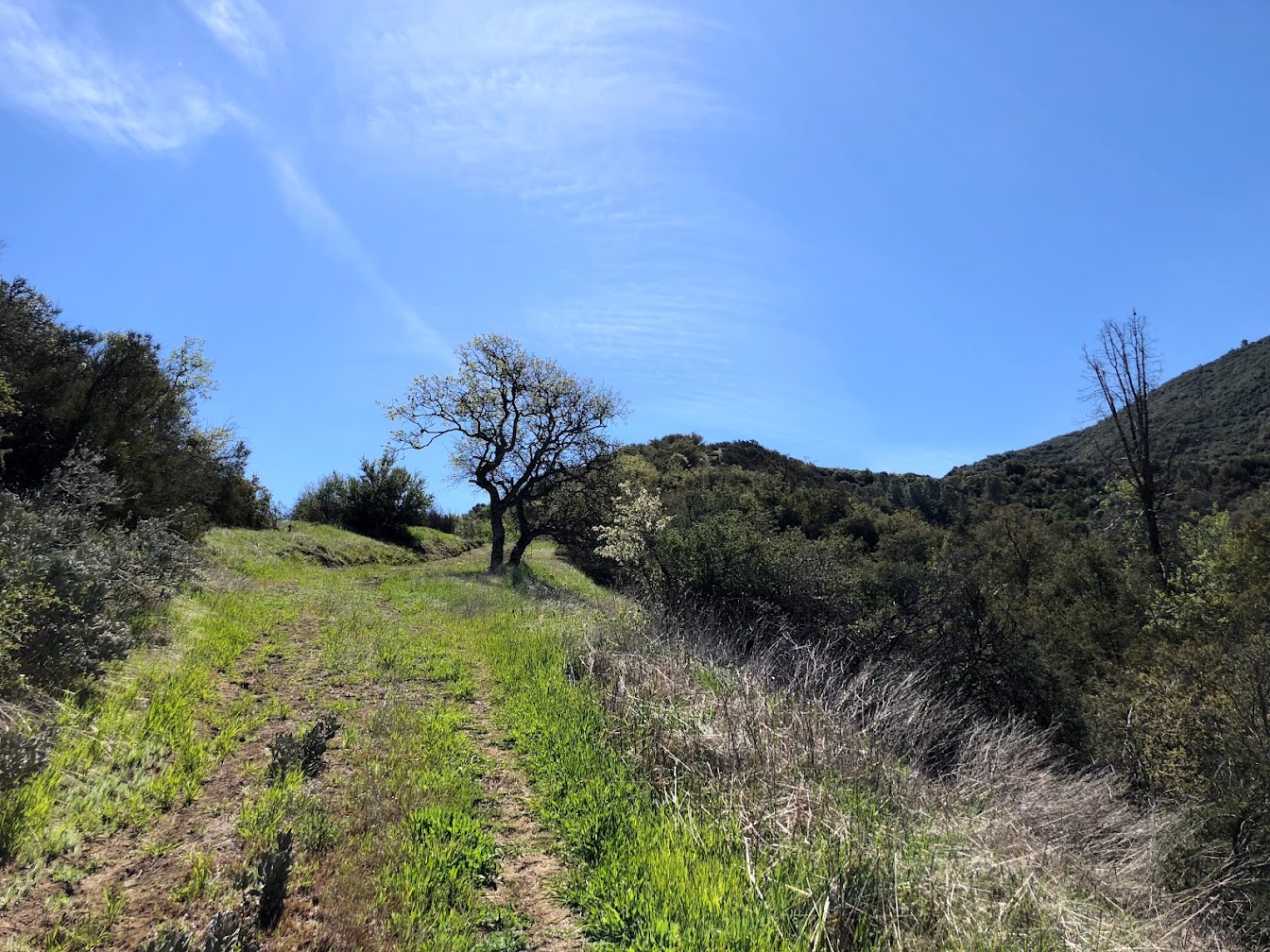 Getting near the summit, nicer fire road

Right below the summit, the fire road plateaus and spreads out into a bit of a clearing. We located the firebreak we’d be using to descend to camp later on, and dropped Miles’s backpack off there. He took out his snacks and water bottle.  I thought about dropping my pack, too.  The top part of my pack comes off and has its own belt so it can act as a hip pack.  I had put all radio components and other critical items such as first aid in there.  I really should have dropped the bottom part of my pack to make the next part of the journey easier.  I knew I had another (roughly) 900 feet of elevation to gain in a short distance, and really didn’t know the condition of the route. In the end, I kept the pack, since I wanted to keep all of my stuff with me (just in case). 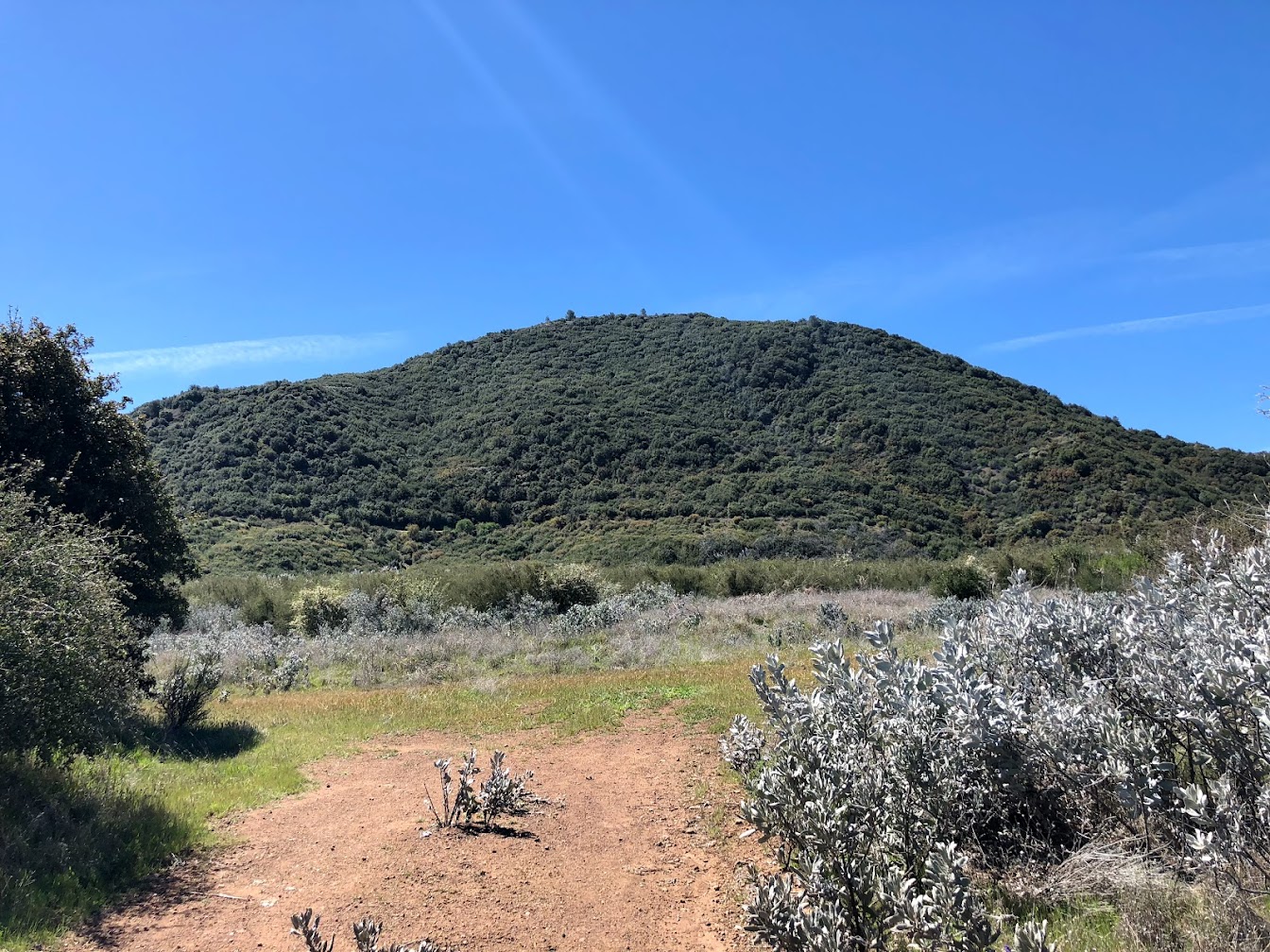 Plateau before the summit

The next part of the hike is pretty much more of the same for a little bit. The fire road climbs slightly around the side of the summit, before dropping down a bit.  It also gets more overgrown, but still quite manageable. 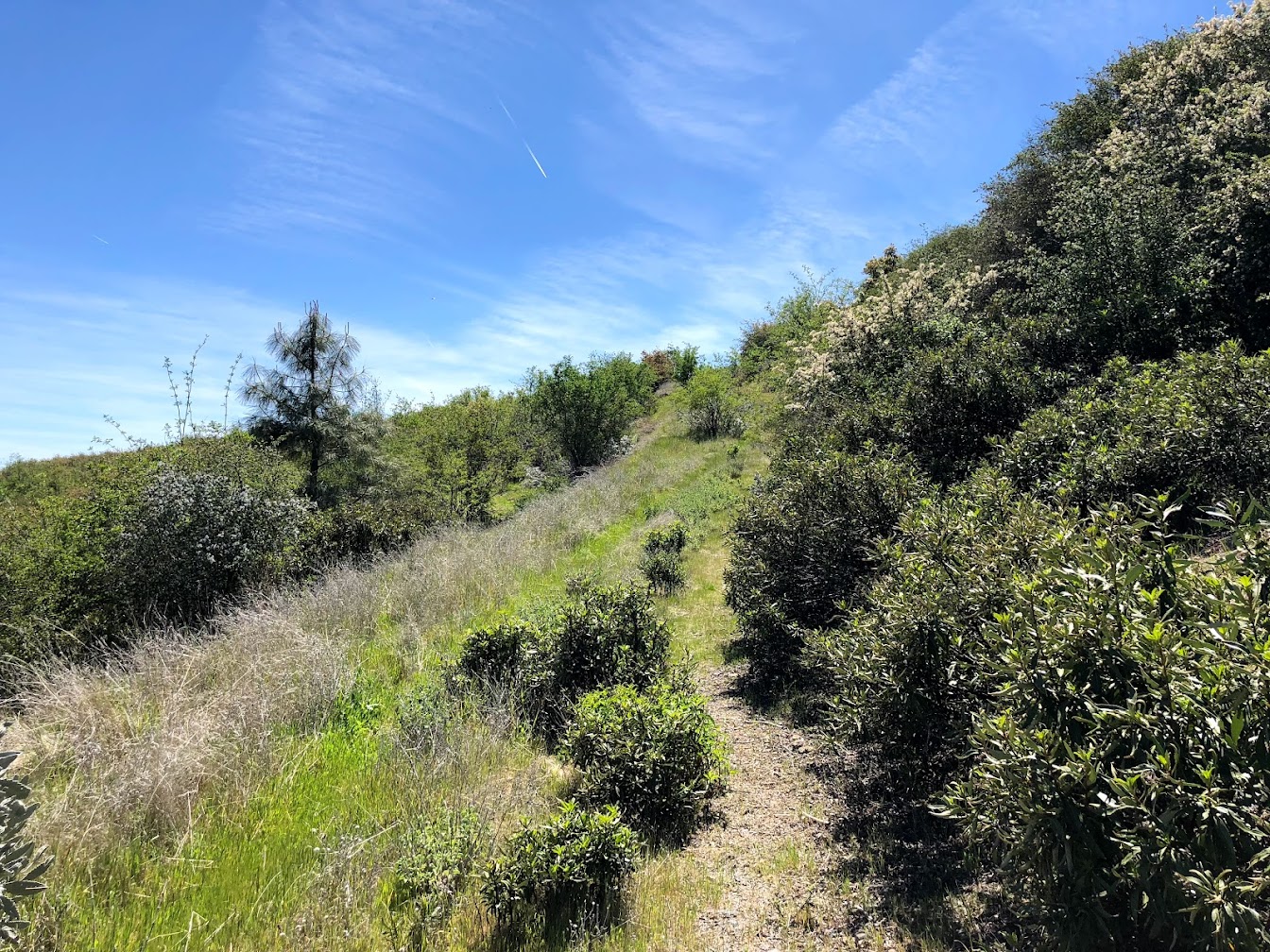 Before long, it’s time to get off the fire road and go up the summit.  Earlier, I’d mapped out a likely route, hopefully free of too much hardcore bushwhacking. Unfortunately, I saw what looked like a relatively trouble-free shortcut, prior to the turnoff for my mapped route. We decided to take the shortcut.  At first, it wasn’t too bad.  Pretty steep, but mostly open. 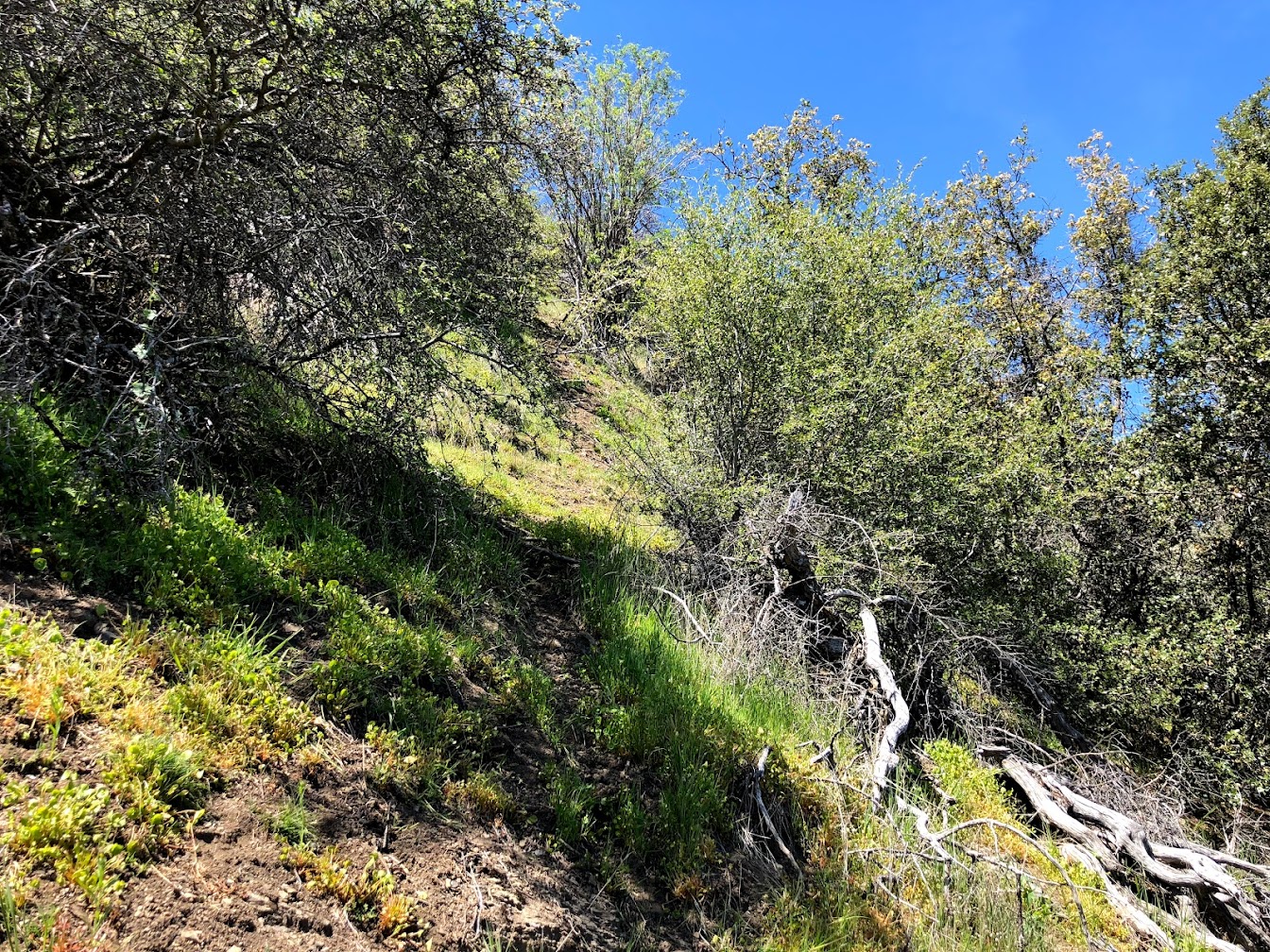 Early part of the shortcut

Then it got rough. It got steeper, and the brush got thicker. Since I was focused on making my way through the brush (and not sliding down the 25-degree slope), I didn’t get pics for the next part.  With my heavy pack on, I really had to grunt to make it through each tricky section, simultaneously pushing my way through chaparral and trying to gain traction on loose, rocky soil. Miles was a real trooper though this part—he boldly pushed his way through the brush, and his fear of falling down the steep slope. He was really brave on this section.

Near the top of the shortcut, there was a particularly thick set of bushes to push through, but we could see a bit of a clearing beyond. The grade of the hill let up a bit, too—so footing was easier to come by.  I pushed through the bushes and walked up into the clearing. Suddenly, I heard a loud rattling sound!  I looked toward the source of the sound, and saw a rattlesnake slithering away from me, about 4 feet away.  As soon as I saw it heading away from me, I felt relief.  My son, however, still hadn’t seen what it was. He was on the other side of the bushes.  I told him what it was and he freaked out a little bit. I told him to try and calm down, and push his way through the bushes—that the snake was far away from where he was.  He made it through and I pointed out the snake for him. Quite an exciting moment! 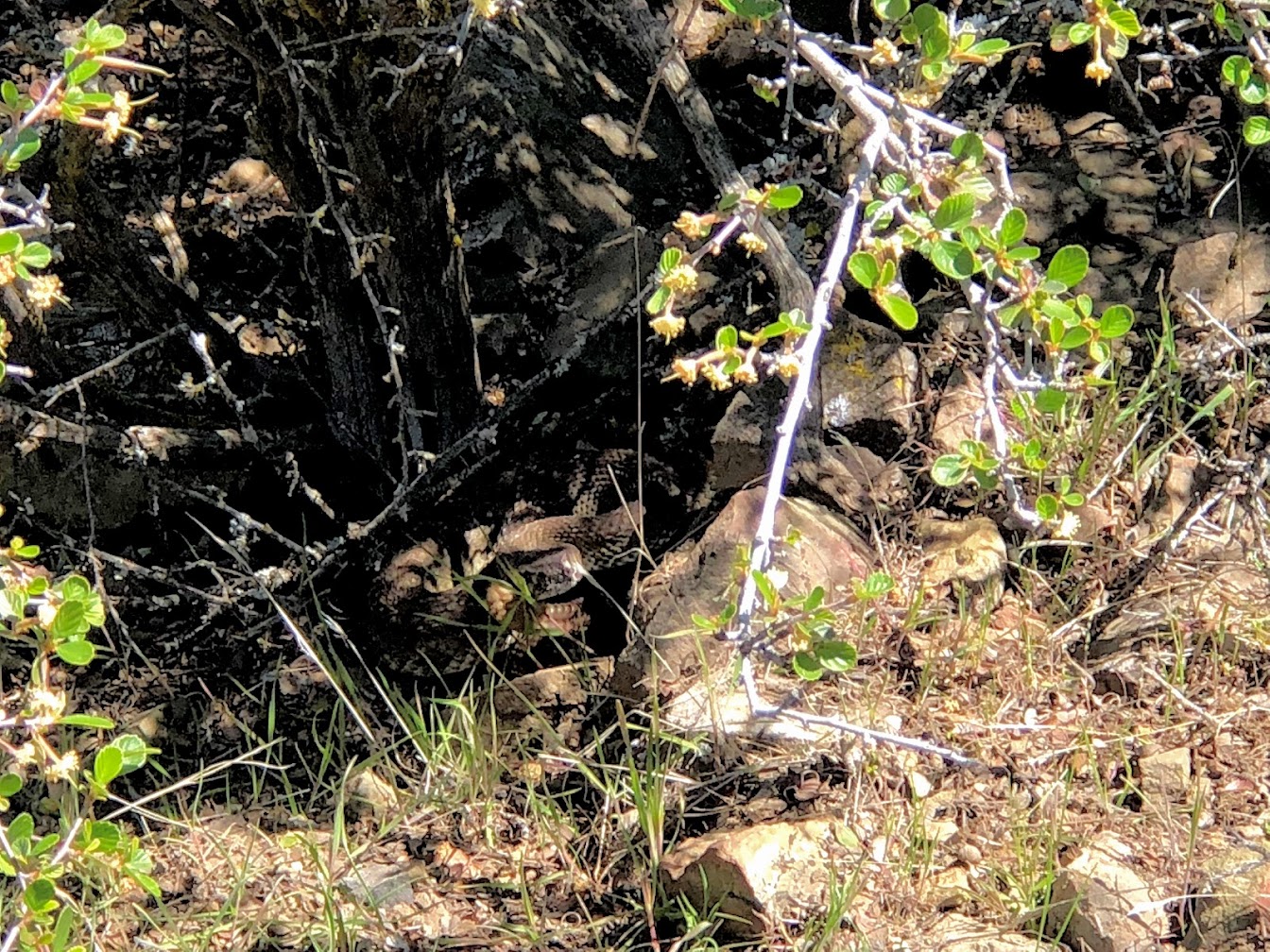 Big rattlesnake trying to hide from us

I’d been telling Miles to keep an eye out for snakes the whole way, so the reasoning for it become quite real! We took a break here, having found a much clearer path to the summit (the one I’d marked on the map). When we started back up, we actually started seeing cairns marking the way. 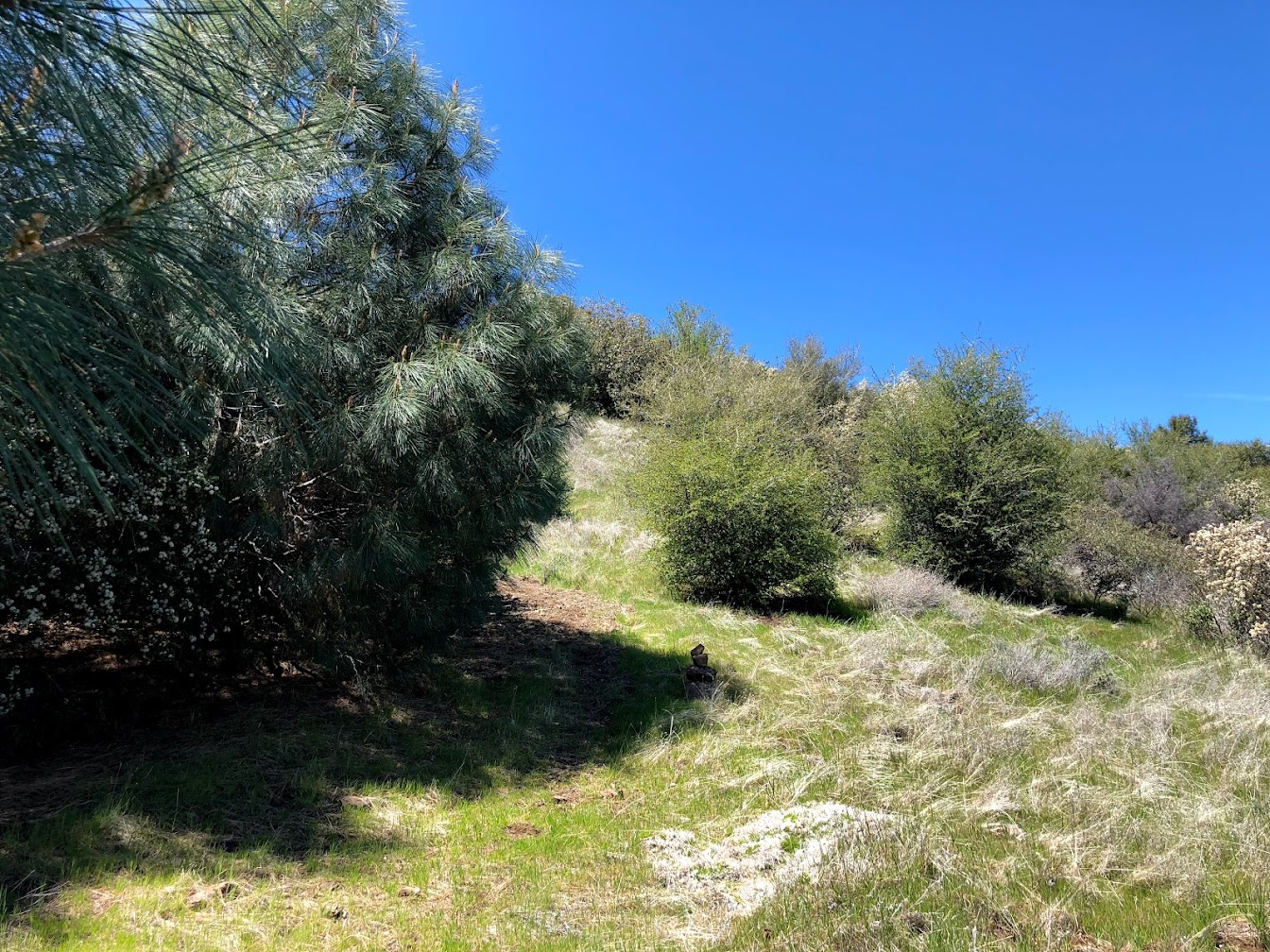 Heading up the hill, path now marked by cairns

There was also occasional flagging tape (pretty old) on trees here and there.  It really felt nice to have the way marked after the super-tough section we’d just done.

A little while later, the path to the summit became clearer than ever, and it was obvious we were almost there.

Once on the summit plateau, we oriented ourselves to where the actual summit was, and proceeded on up.  We probably could have taken a shorter route through some more bushes, but decided against any more shortcuts for now. 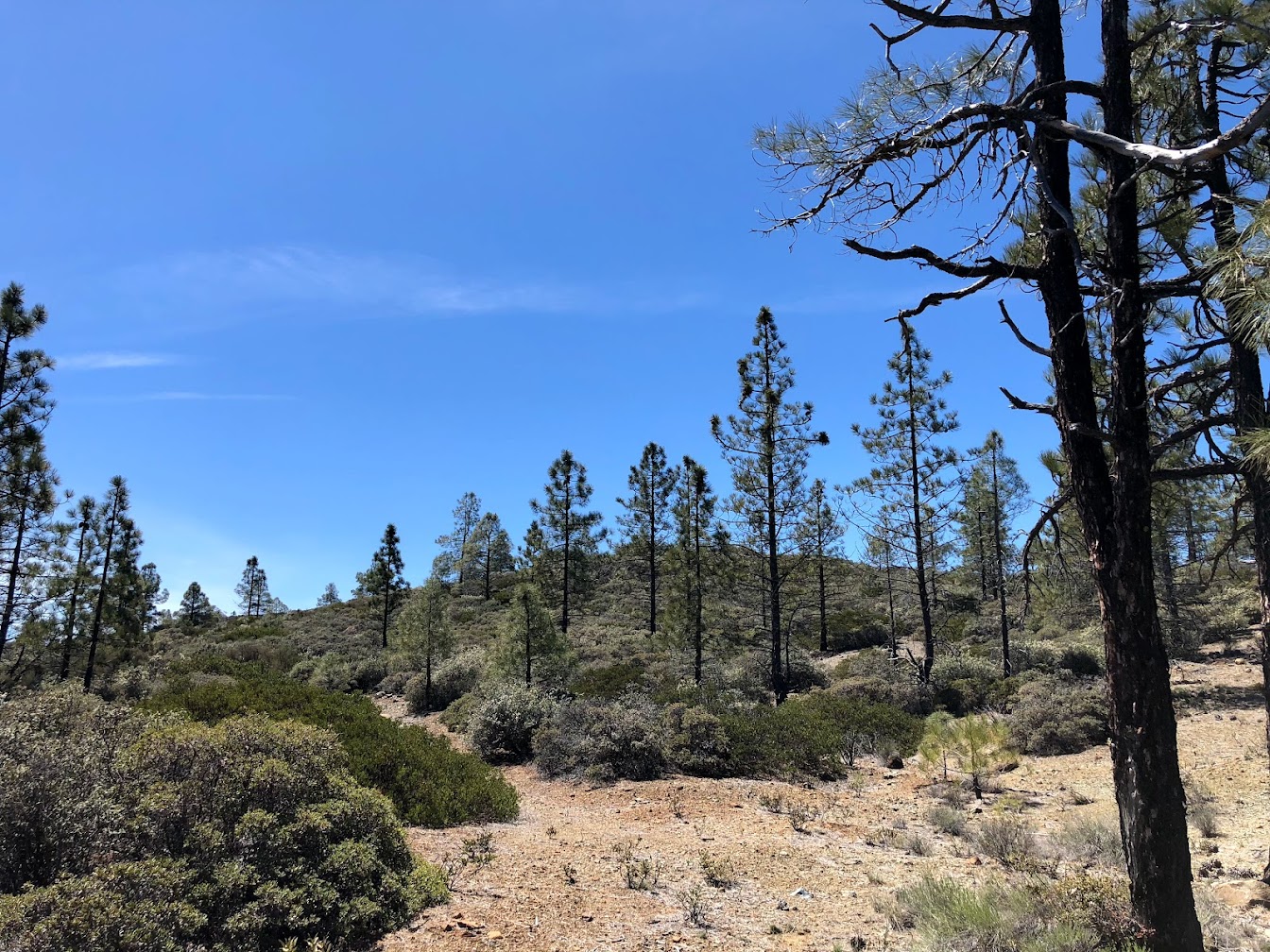 On the summit plateau

A few minutes later, we reached the summit. 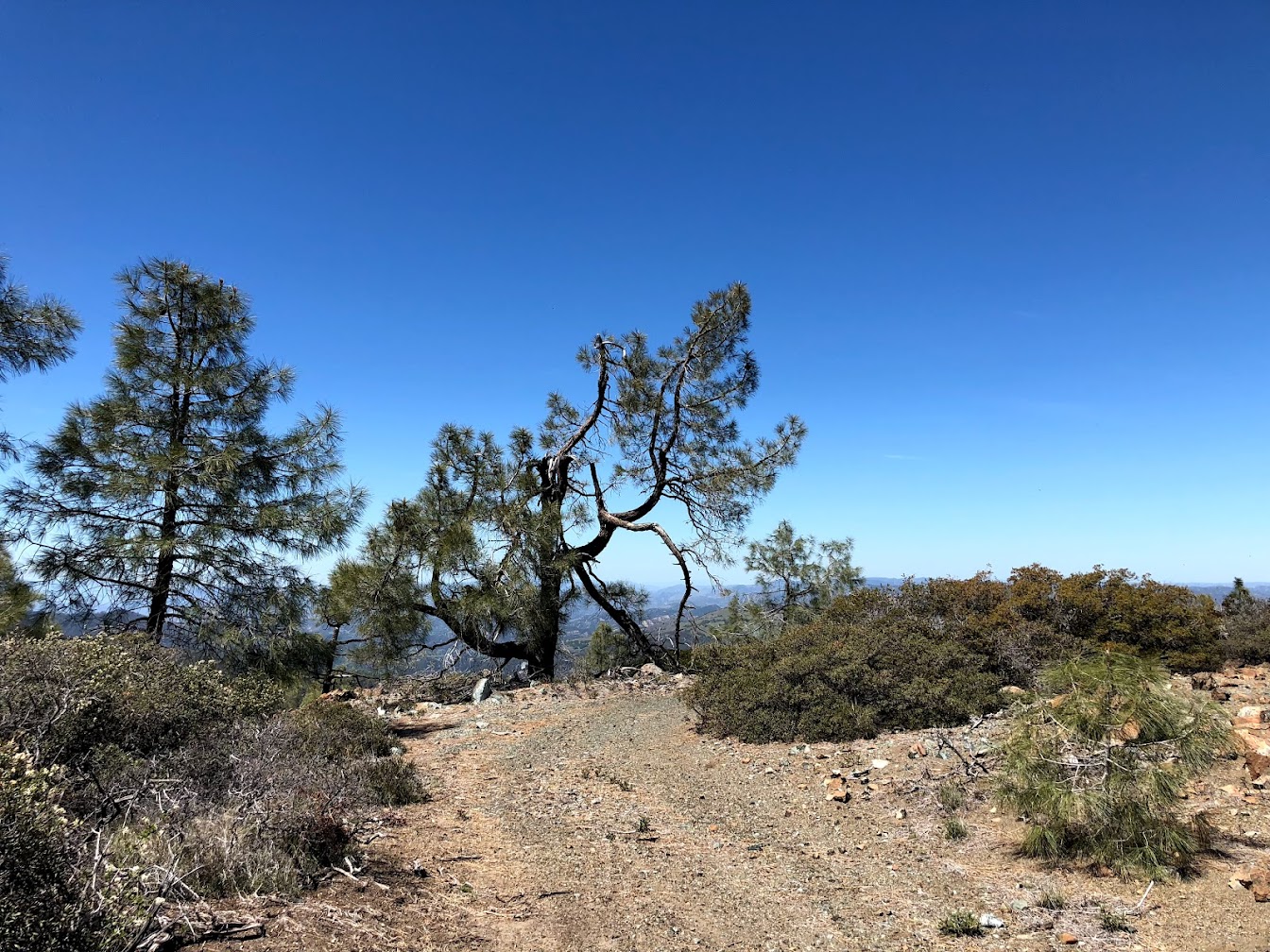 After getting the hammock set up between a couple of handy trees and getting our lunches out, I started setting up the antenna. There are several trees on the summit. One of them was the perfect height, as well as the perfect distance from where I wanted to operate (in the shade).  I threw my antenna wire over the highest branch, putting it up about 30 feet or so. I sloped the wire down to my operating position, with my fishing pole mast extended a couple of feet so as to keep the closer end away from the ground.  I hooked everything up, then sat and enjoyed my sandwich before starting to call CQ. 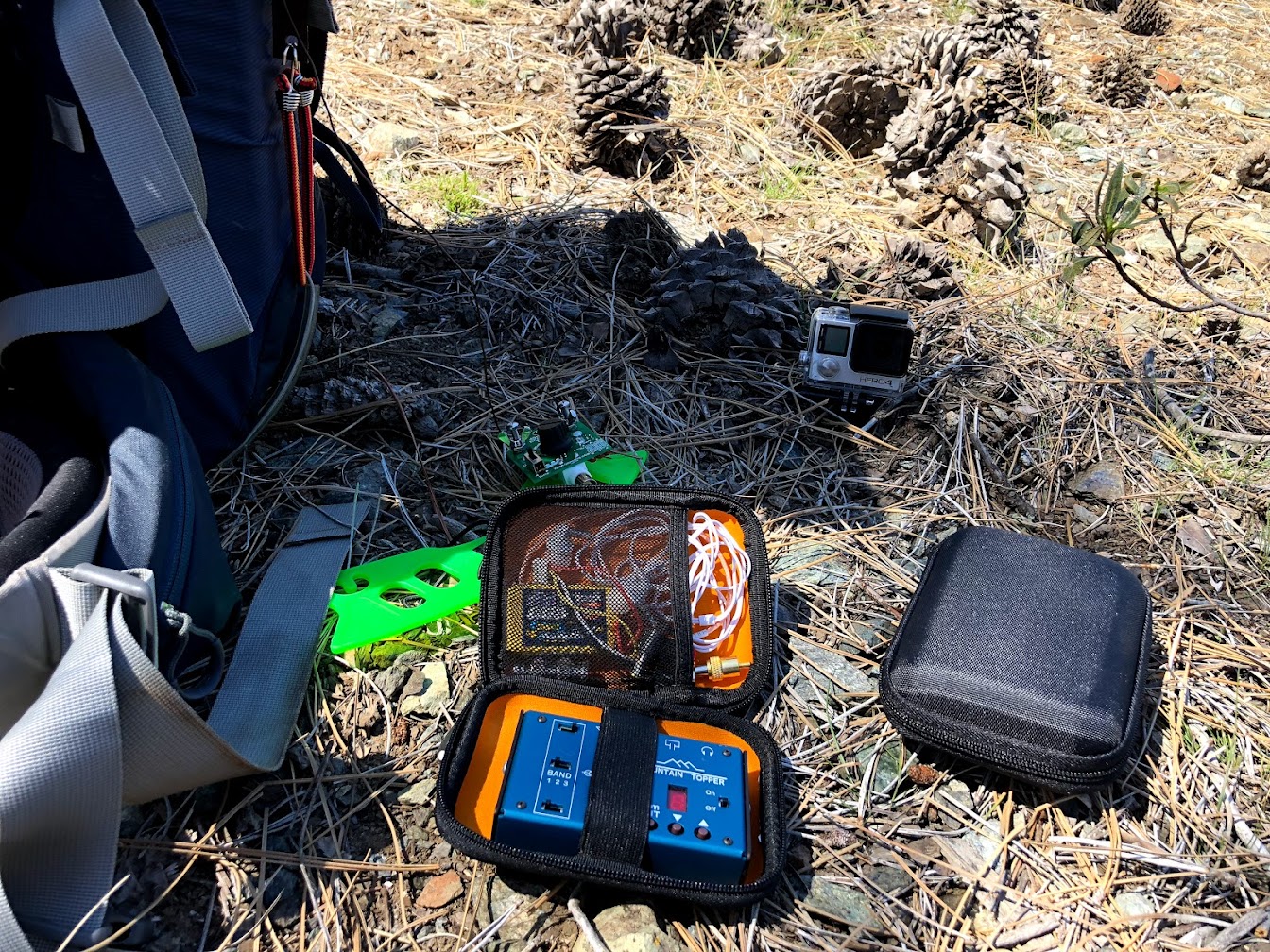 Part of the setup

While eating, I checked to see if I had cell service. I didn’t expect it, but after checking discovered I had a weak LTE signal. I used this to self-spot, saying I’m on 146.52 and that I’m setting up HF.  Nobody ever reached me on 2 meters, though I did hear the squelch break a few times while working HF.

Once I finished eating, I turned everything on and tuned 20 meters.  I went to my pre-planned frequency and checked to see if it was clear. It was (or so I thought).  I called CQ, then heard someone calling CQ over me.  I tuned around a while before settling on a different frequency. I checked that one as well, and it ended up working out.

I made 8 contacts in 10 minutes on 20 meters—including two of my Bay Area friends, AB6SO and KI6DS. That really surprised me—20 meters is not normally the band for such close-in contacts!  The bands had been behaving a bit strangely, with the recent occurrence of a solar event.  In fact, many of my usual far-away chasers were coming in really weak, for the most part.

I then switched to 40 meters, where I got 4 more contacts.  I then consulted Miles on whether we should hang out on the summit a bit more, or start our journey to camp. He didn’t have a strong opinion on the matter, but was leaning toward heading to camp.  It was a little bit after 2pm, so I decided I’d skip operating 30 meters and just pack up to head to camp.

I’d kind of planned on trying to operate “QRPTTF—QRP to the Field,” but after the exhausting trip up the mountain, I didn’t have the mental capacity to try and hunt for those stations and make the necessary exchange.  With 12 SOTA contacts in the log, I was content to move on. 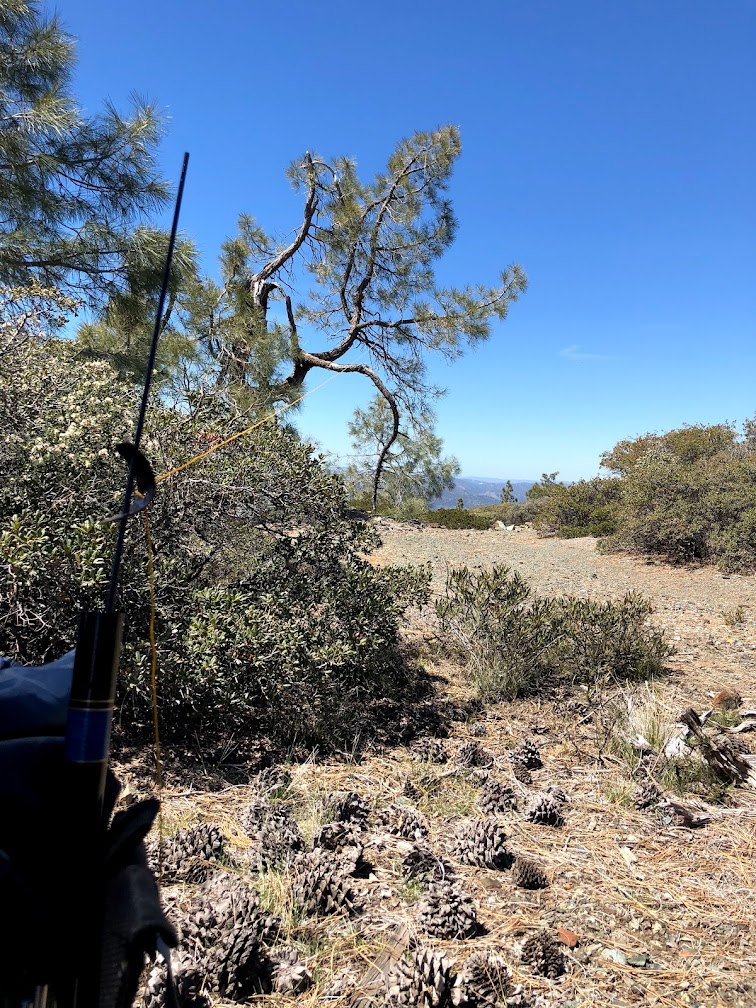 On the way down, we followed the cairns the whole way.  We had to push through some bushes and backtrack a bit when we lost the route, but overall, it was much better than the trip up. I’ve marked the “ideal” route on the linked CalTopo map. That’s the route I’ll follow next time!

After getting back onto the fire road, the trip down to camp was a rough one. But that’s another story for another time. And we did make it.  The rest of the trip was a great success.