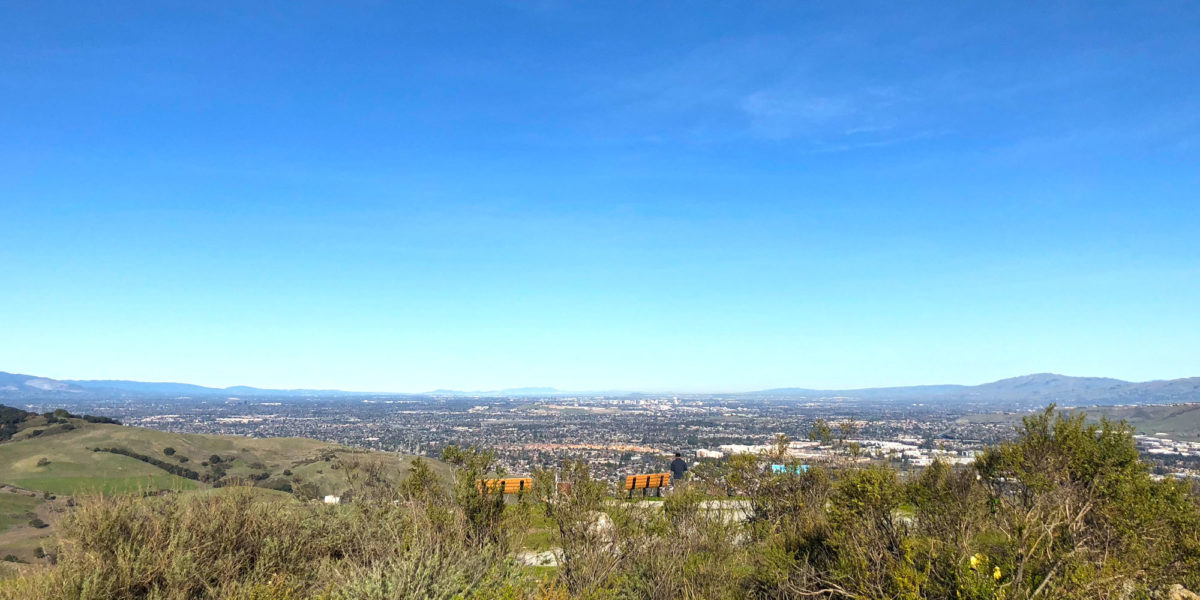 I wanted to get out to an easy summit to operate Winter Field Day for a couple of hours. I ended up only getting about an hour, but it was a good hour! I’ve done this summit a few times, but this is the first time it’s in my blog. It’s a short, fairly easy hike, and not too far of a drive from my house.

I wanted to try approaching from the south this time, so I attempted to do so via Country View Drive. I drove to the top and went to the gate mentioned in previous trip reports.  There was a lot more signage than I’d expected saying not to go this way, so I decided against it. While walking back to the car, I gave American Tower a call to see if I could get permission to walk their road. They were just confused.  So I got in the car and headed around to the north side. This cost me at least 45 minutes, but still left me plenty of time to operate for Winter Field Day. 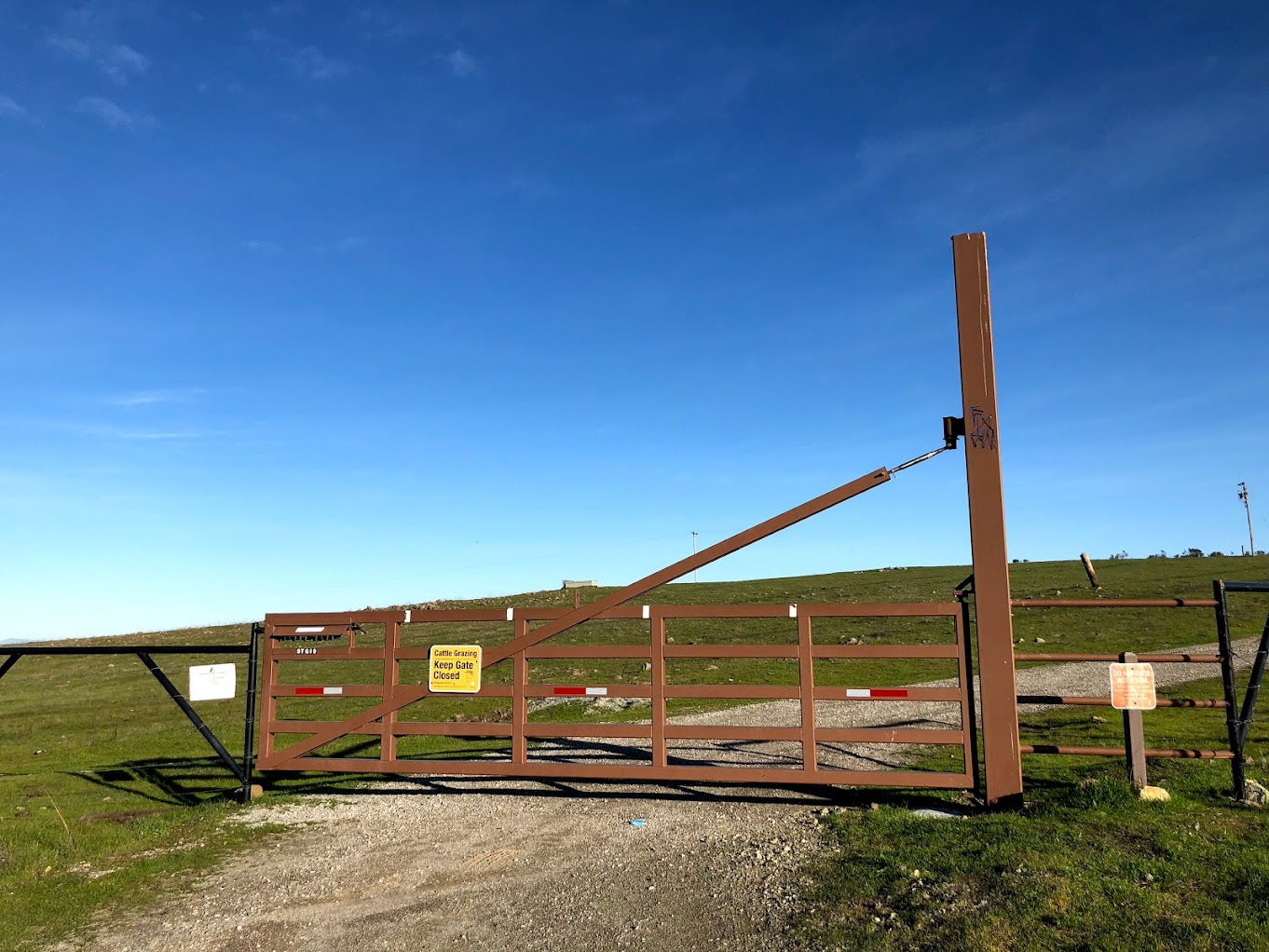 I quickly made the drive around to the north entrance. I stopped at the pay station on the way in, but it was out of order. I made the (probably correct) assumption that this meant I wouldn’t have to pay the usual $6.  This was kind of nice, since this machine has failed in the past, causing me to pay twice.  Must be karma! 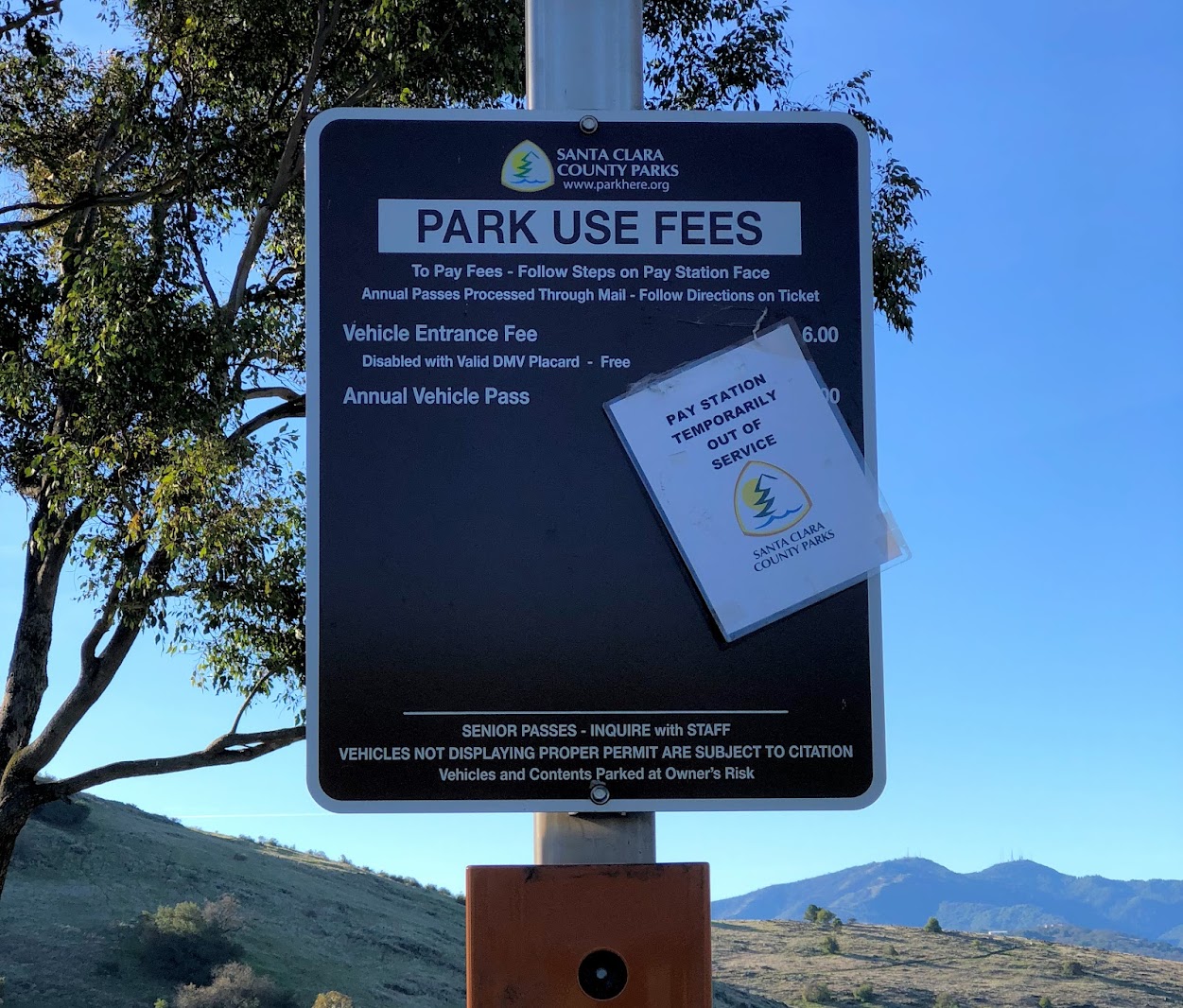 Pay station temporarily out of service

Wasting no time with that, I proceeded to the parking lot closest to my usual trailhead, and got to hiking.

The weather was pleasant – a little bit cool and windy, but really good hiking weather. My bag was ready to go, so I proceeded straight to the trail, along with my trusty canine companion, Tashi. 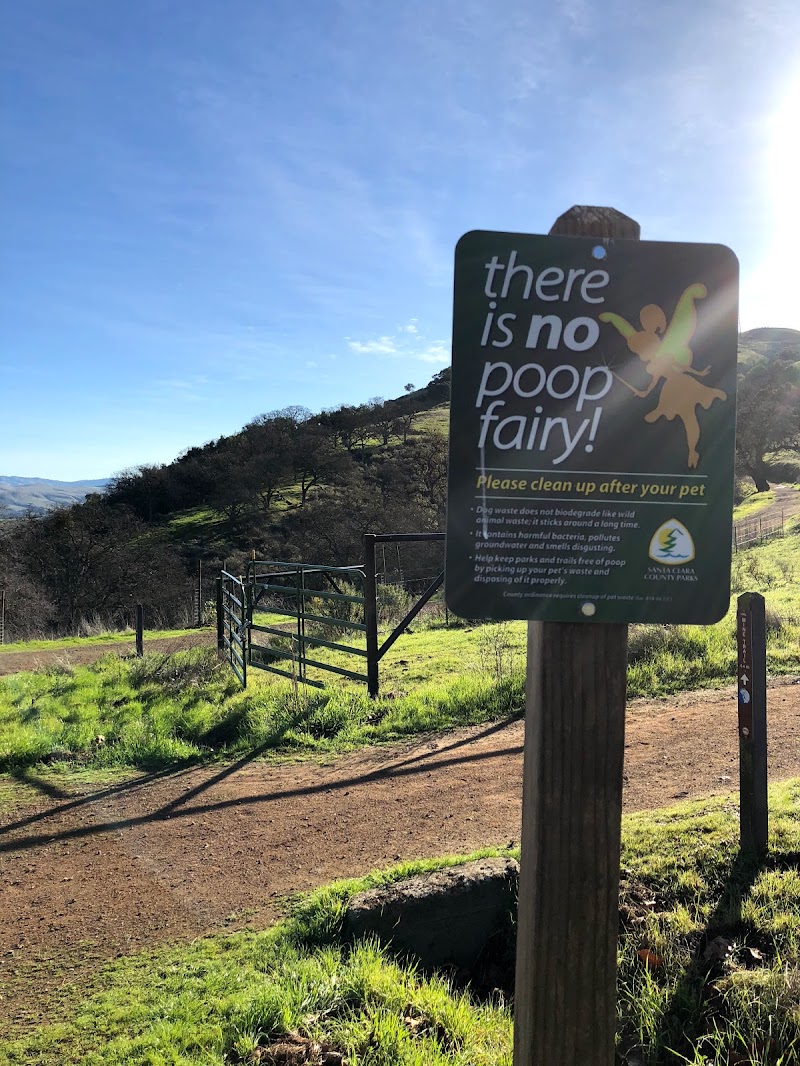 One of my favorite signs. Right at the trail entrance. 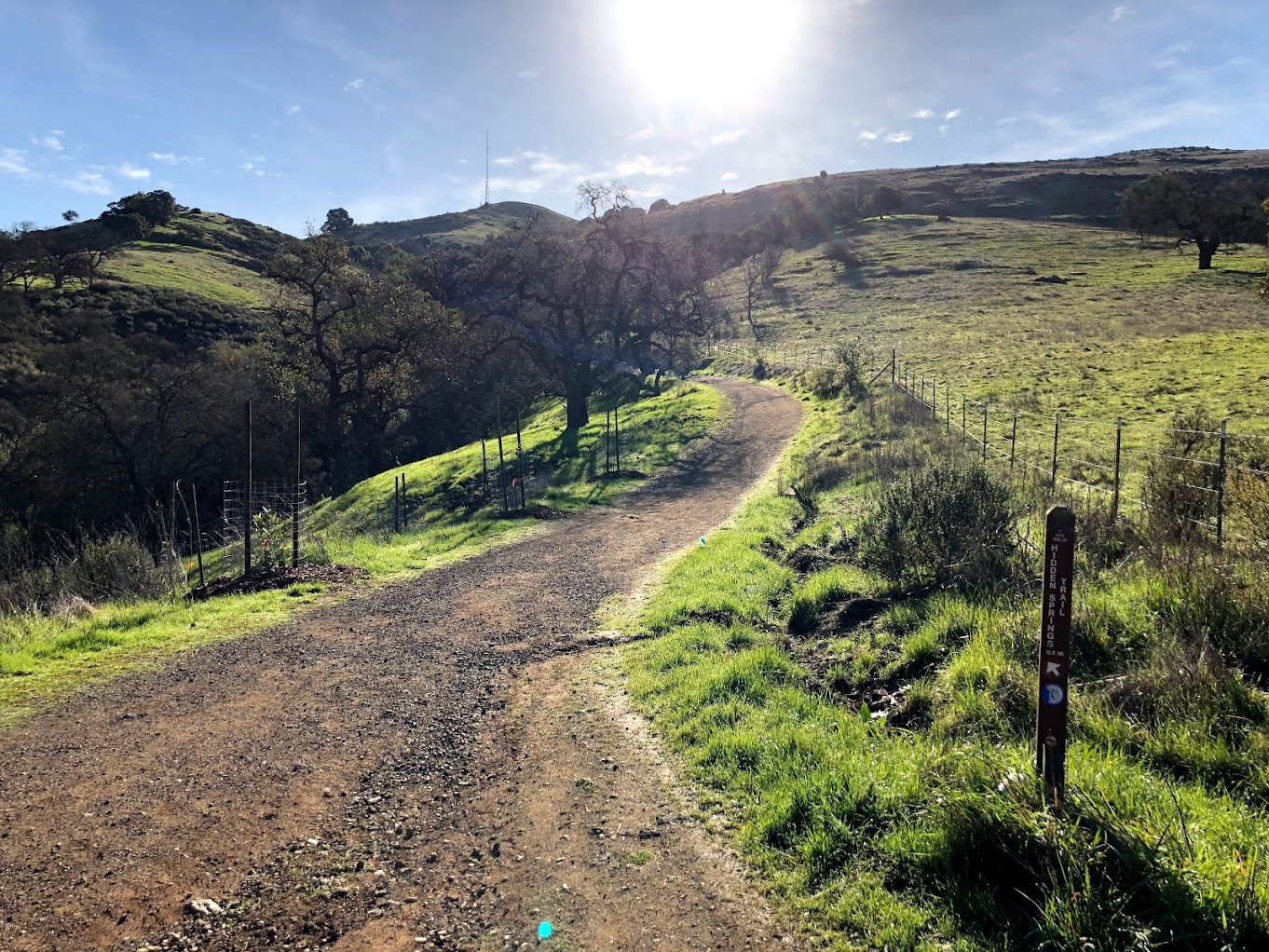 Beginning of the trail

Having been here a few times before, I went directly onto the trail and moved quickly the whole way. No looking around or exploring. I wanted to maximize my operating time! The only time I stopped was to take off layers so I wouldn’t get too sweaty and freeze once I stopped at the top.

Even though I’d been here before and wanted to move quickly, I still really enjoyed the scenery. This is a really lovely time of year to visit this park. The grass is green, the ground is soft and the trail lacks dust. 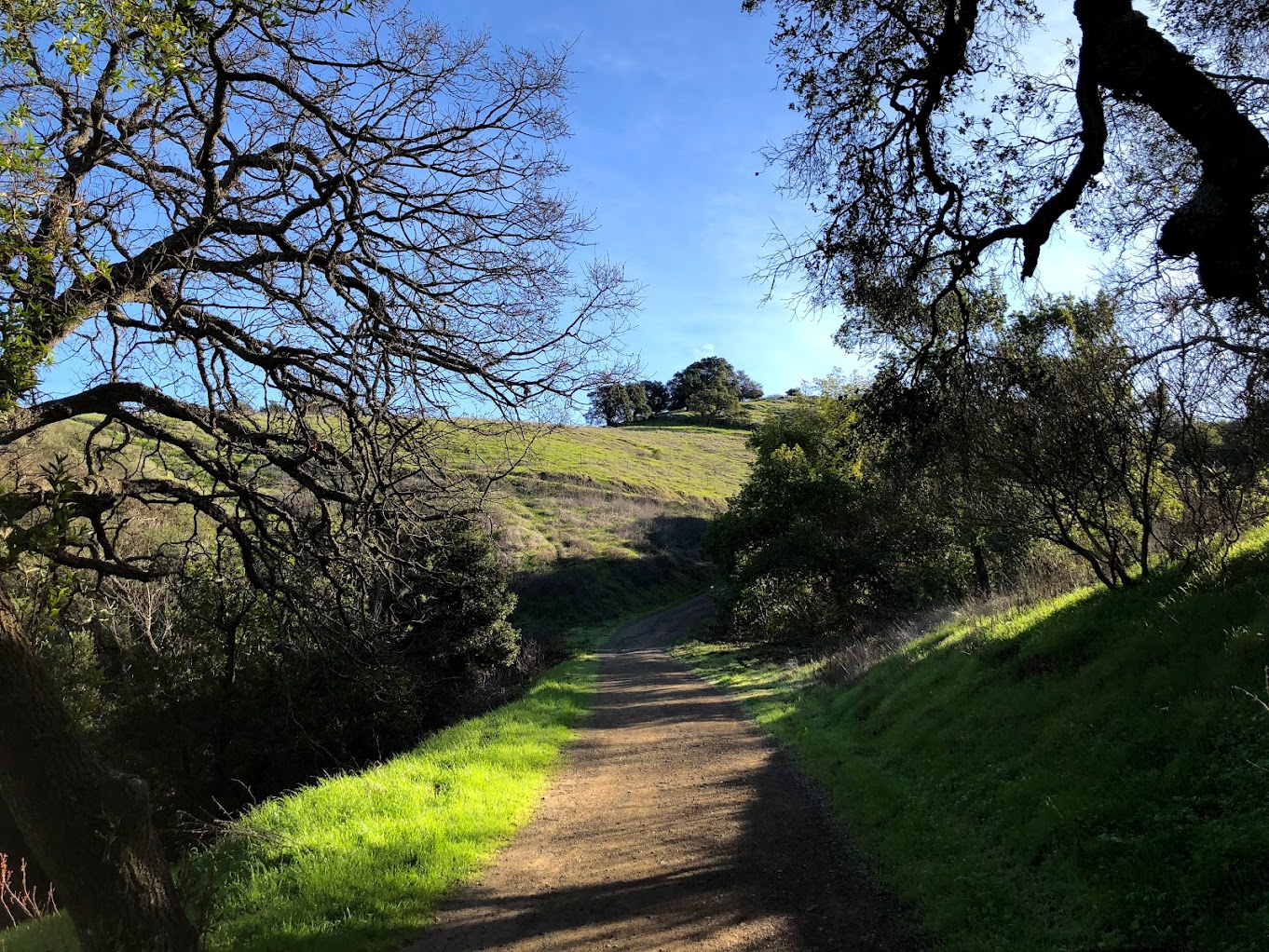 Walking through the trees in the lower section of the trail

There are a few steep-ish sections on the way up, but nothing too crazy. It’s mostly a very gentle grade. On the summit, there’s a tower and before long you’ll see it up close and personal as it comes back into view near the top of the trail. 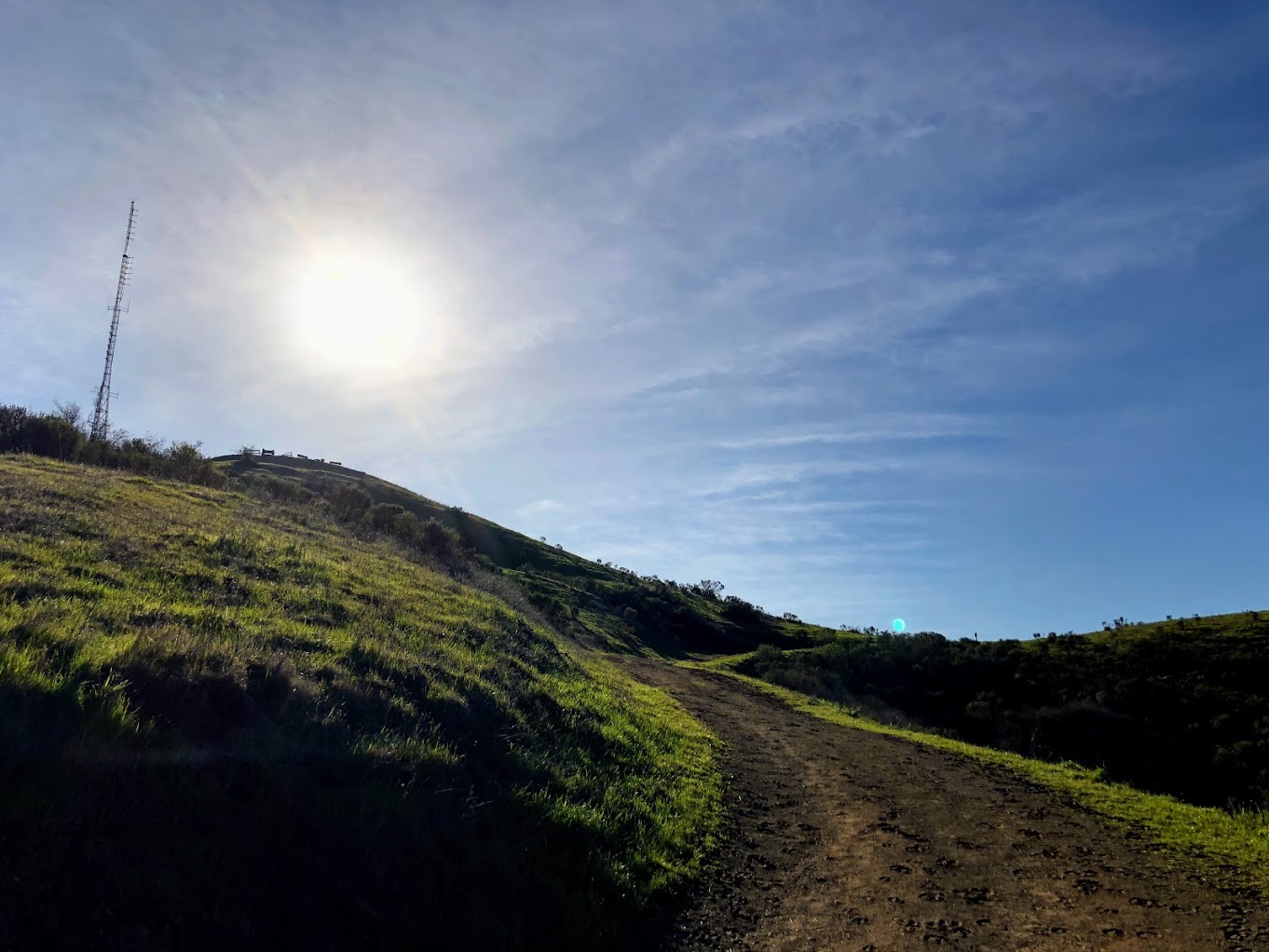 Arriving at the top, I walked quickly around the summit loop and up onto the highest point of the summit (among the bushes). I snapped a couple of pictures, including one picture of the spot I used to operate last time I did this summit. I wouldn’t be operating here this time. 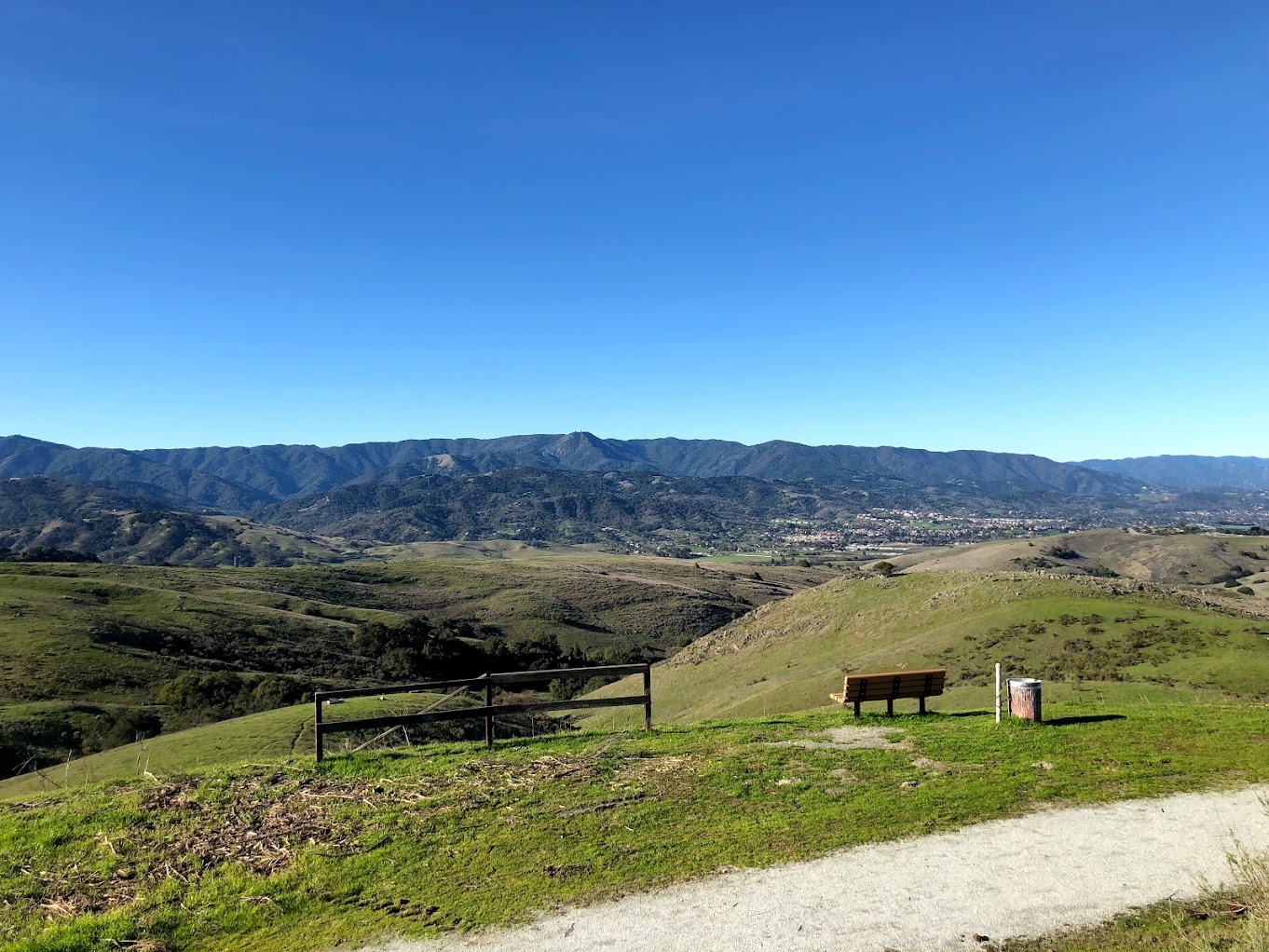 Having visited the true summit, I left the “crowds” (there were only a few people there) and proceeded to the neighboring peak, a couple hundred feet away, and about 10-15 vertical feet below the true summit.  Arriving there, I went straight into scoping out a place to put my antenna and gear.

There aren’t any trees on the summit, but there are a number of bushes and some rocks. I put my squid pole into a nearby bush, and used one of my ties to make sure it stayed in position. I placed the wire on the pole and raised it up.  I took the far end of the antenna and tied it off to a bush below the summit to the east.  I pulled the near end taut, hooked everything up and I was ready to go! Or so I thought.  Hooking everything up to the FT-817, I realized my checklist didn’t include the external filter I use for running CW!  Oh well. I decided I’d switch radios between the FT-817 and the MTR-3B if I wanted to switch to CW operation. 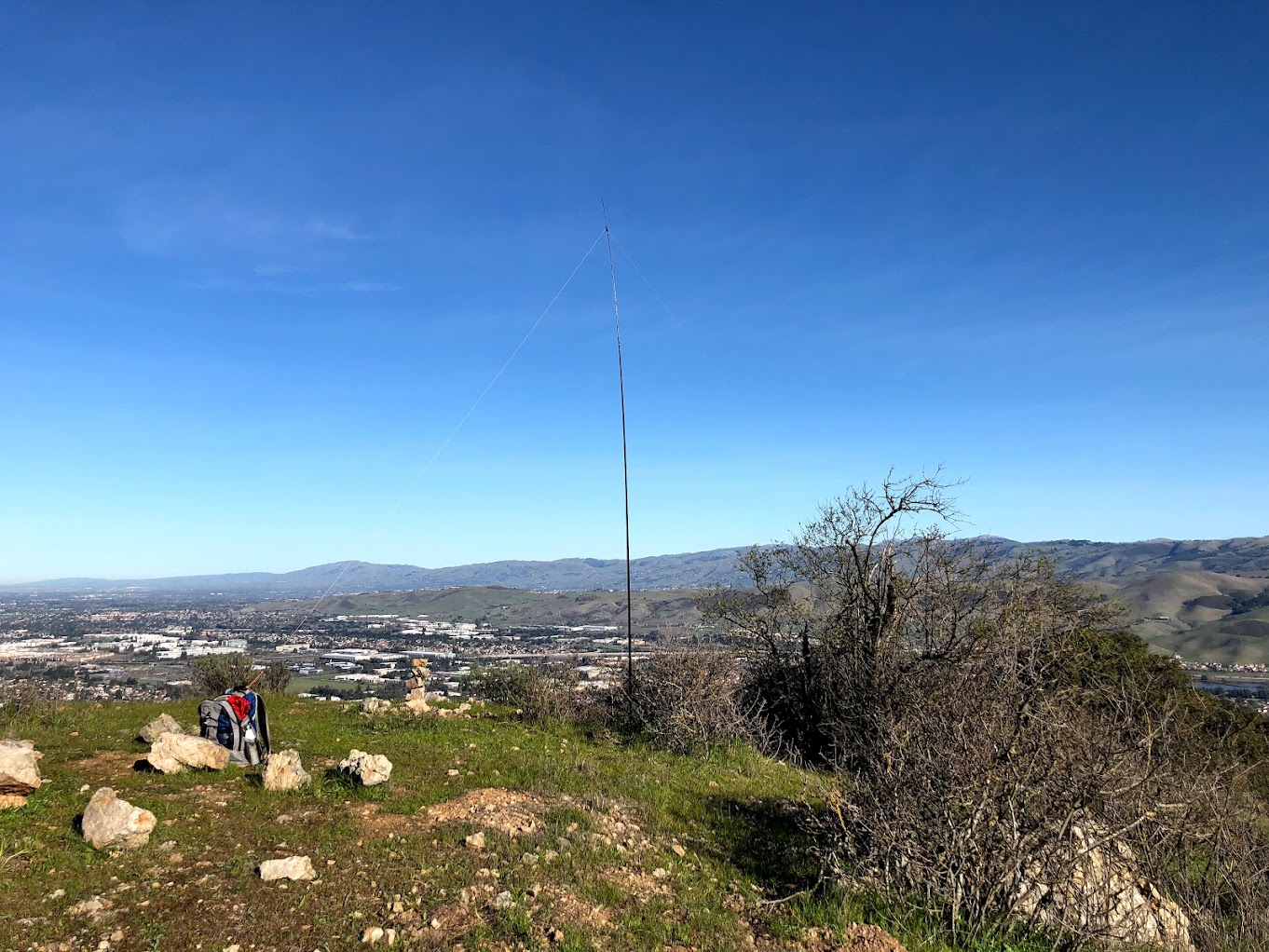 Operating with a view

I sat down and adjusted my antenna matching device for 40 meters. Then I got on dxsummit.fi to look for WFD spots. Most of the spots I was seeing were SSB, not CW. So I decided to do Search and Pounce (S&P) operation on voice for a while.  I successfully contacted two stations on 40 meters, then switched to 20 meters and got two more contacts there.

By then, Winter Field Day was just about over. I had my 4 contacts to qualify the SOTA summit for points, but I wanted to get a couple more if possible, and see if I could get any summit-to-summit (S2S) contacts. 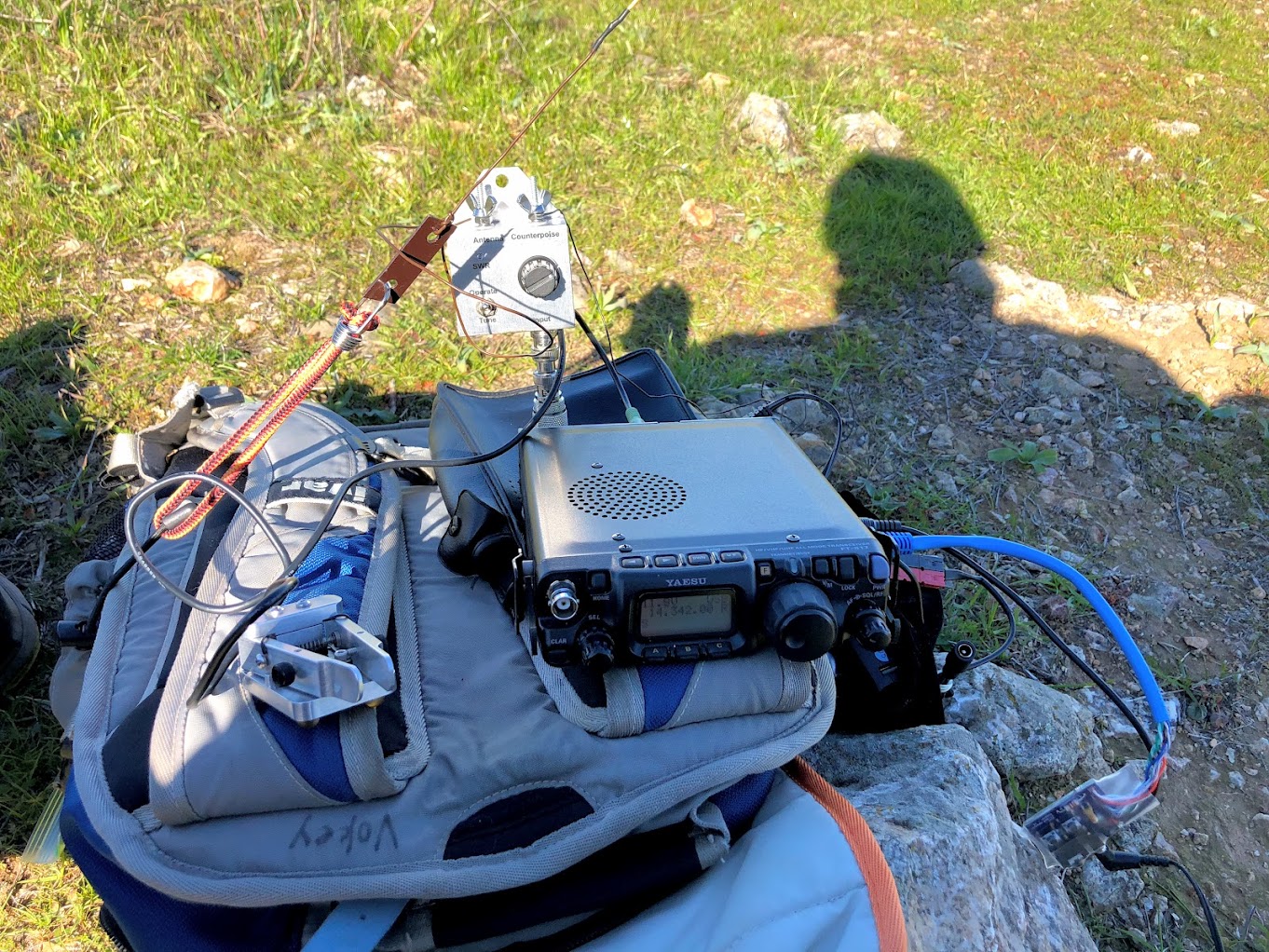 The SOTA Database had been having issues for a few days, including this day. I couldn’t self-spot from my SOTA Goat app since it couldn’t contact the database to verify the SOTA reference.  I tried sending out an SMS spot, but remembered I only had it set up for my burner phone, which I hadn’t brought along on this trip.  So I kept an eye out for any other SOTA stations out there on other summits.

Eventually, I saw a spot for KA6DUH and was able to work that station down in Southern California. Then another SOTA chaser, NW7E, asked me to move to another frequency to make contact.  I went to the agreed frequency and we made contact, followed by a couple more chasers and another activator, Vic AB6SO, over on Mount Diablo about 40 miles north of me. 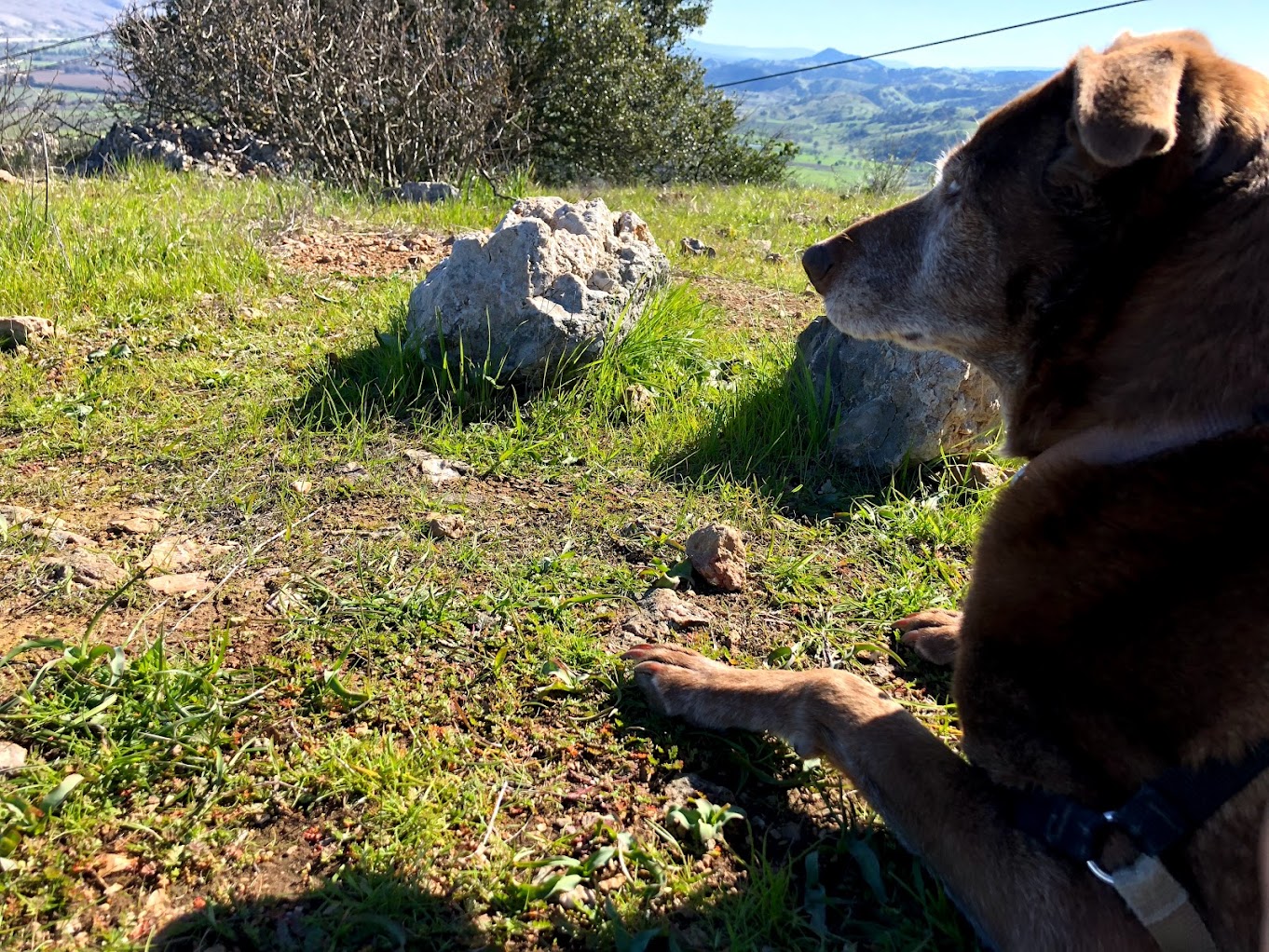 I briefly considered sticking around a while longer to operate CW, but decided against it—other things to do!  Definitely a very pleasant time up on the summit, though.