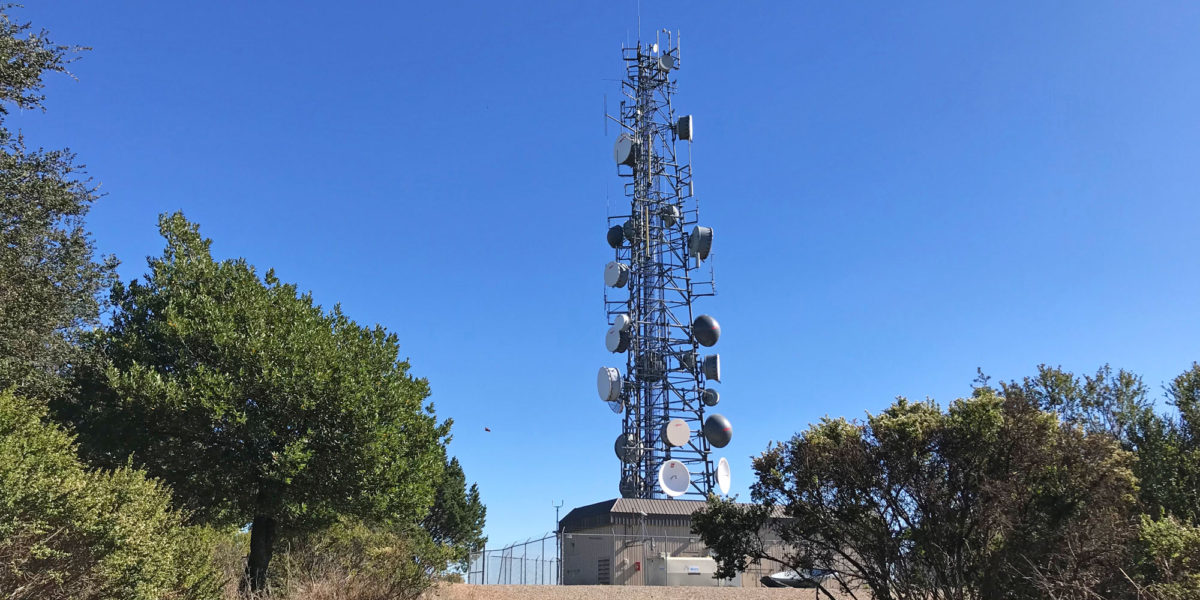 After attending the SOTA lunch at Pacificon, I wanted to go grab a quick/easy summit. Vollmer Peak has been on the list for a while. It’s a very short hike and it was relatively close to San Ramon, where lunch was.  It’s not the most exciting summit, but it does have a couple of nice views.

This was a pretty quick drive from San Ramon where the conference was, but if I were to do this from where I live (San Jose), I’d want to combine it with some other peaks or some other trip. That said, it was pretty easy to get there, without too many traffic issues.  Just drive to the destination and park. 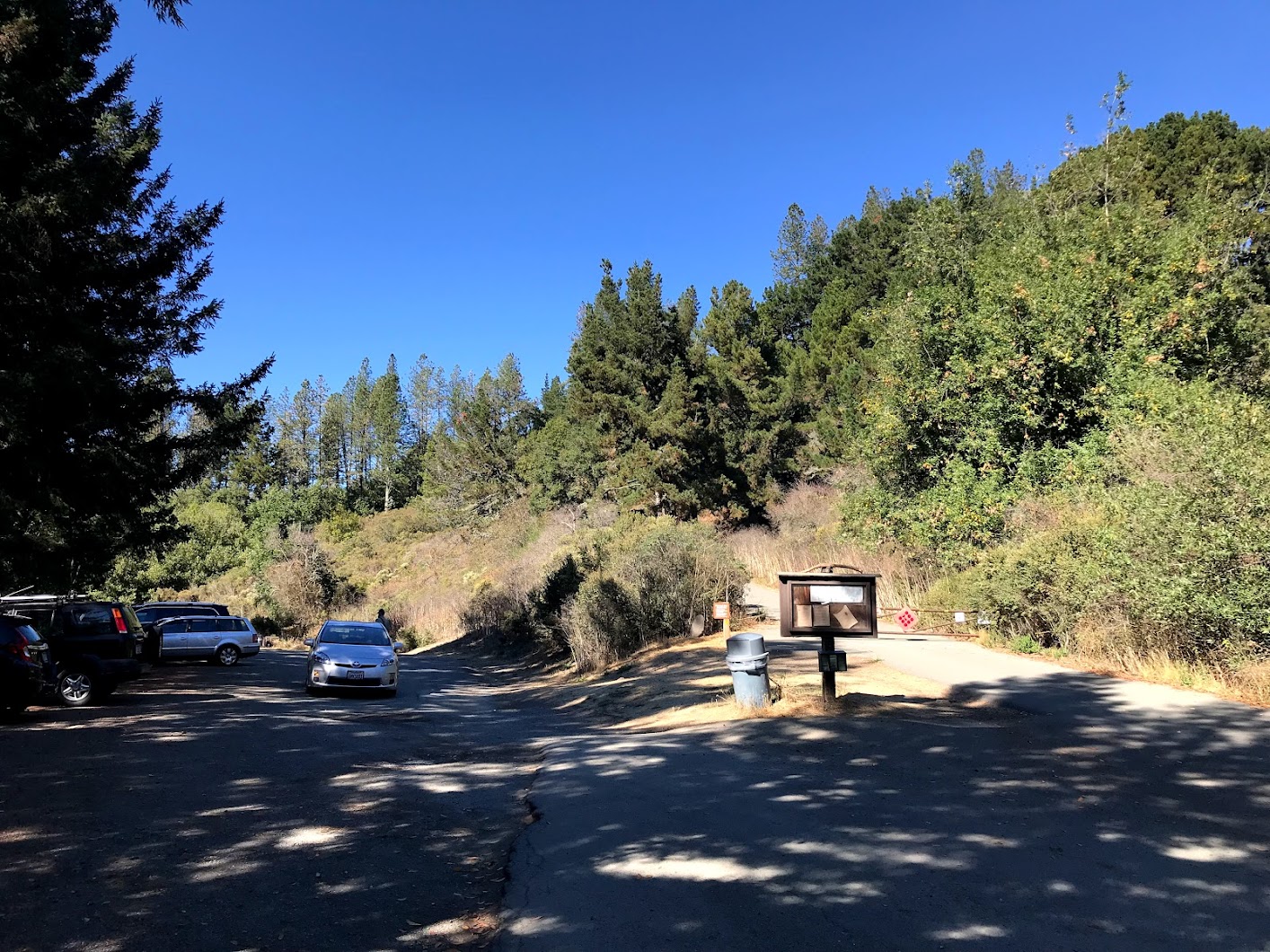 Parking lot and trailhead (left); road to the top (right)

I spent a minute trying to decide if I wanted to take the road or the trail. I wasn’t dressed for hiking, wearing jeans and street shoes. I ended up deciding to take the trail—it’s short enough! 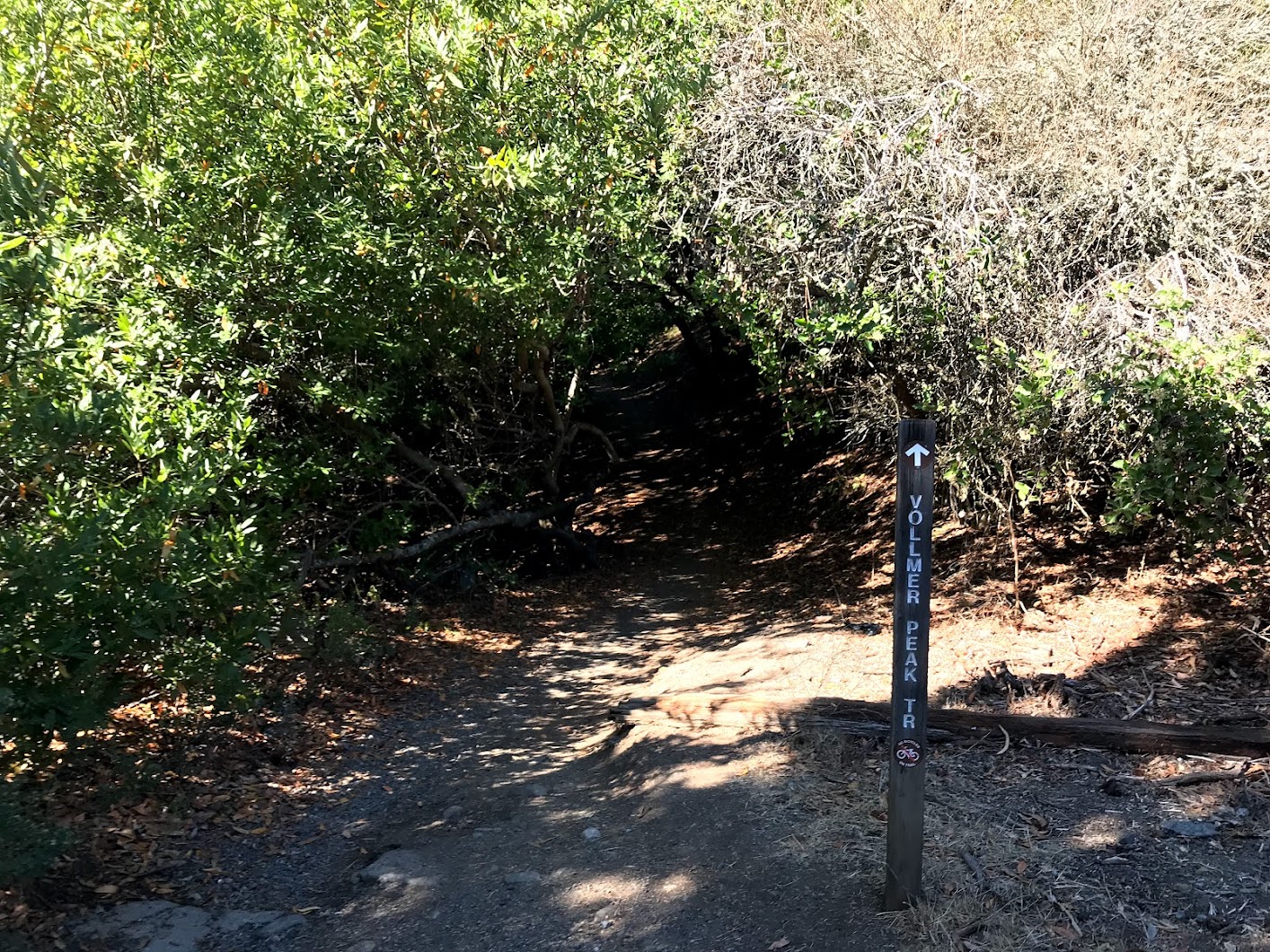 Not wanting to waste any time, I hustled up the hill. I passed several people on the way up. The trail did branch a couple of times, and I just kept following it uphill.  There are views to the west and north here and there. A pretty pleasant little trail. 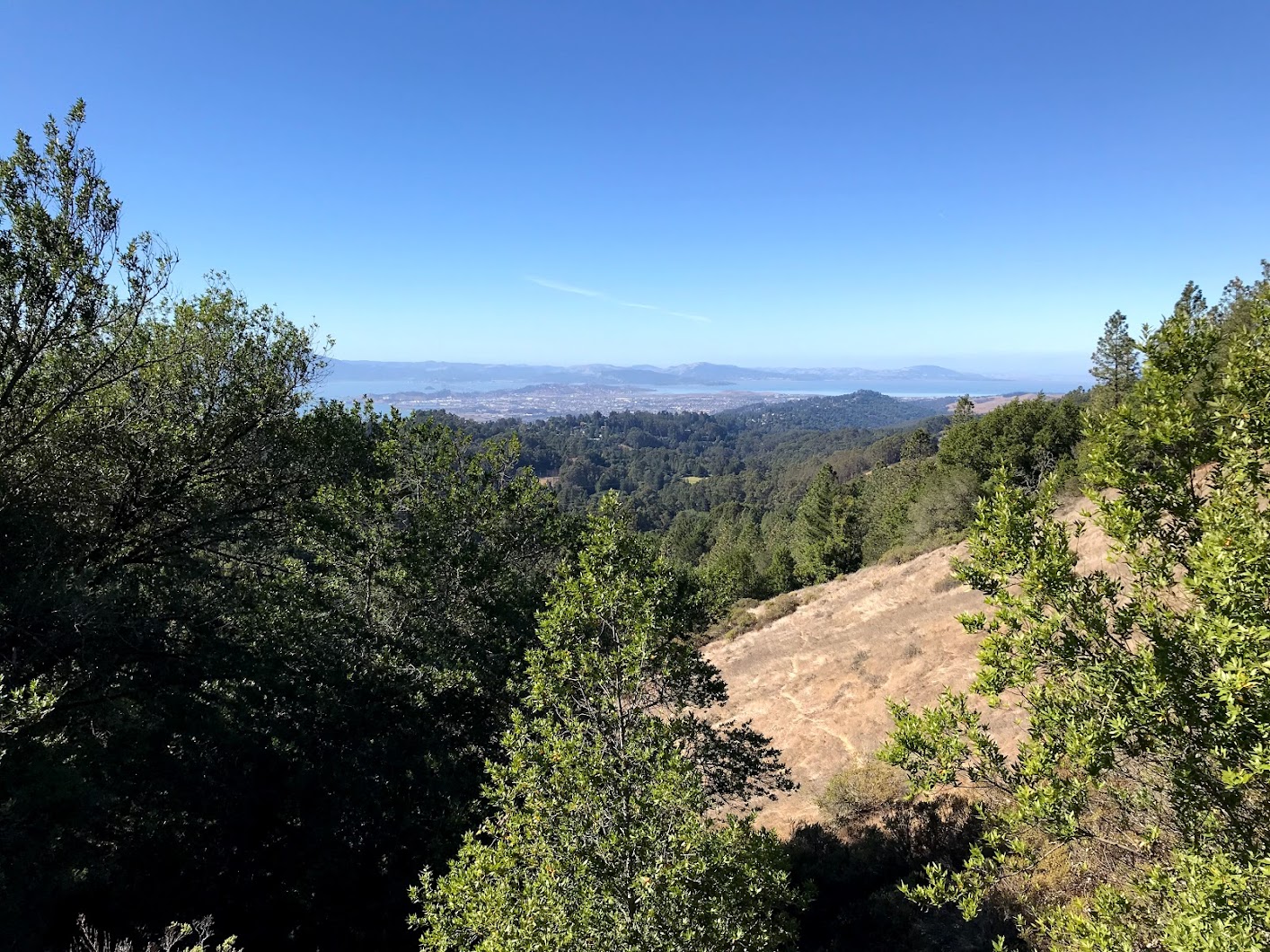 View to the north on the way up

Eventually, the trail met the road that goes to the top, which makes a final steep climb to the summit. 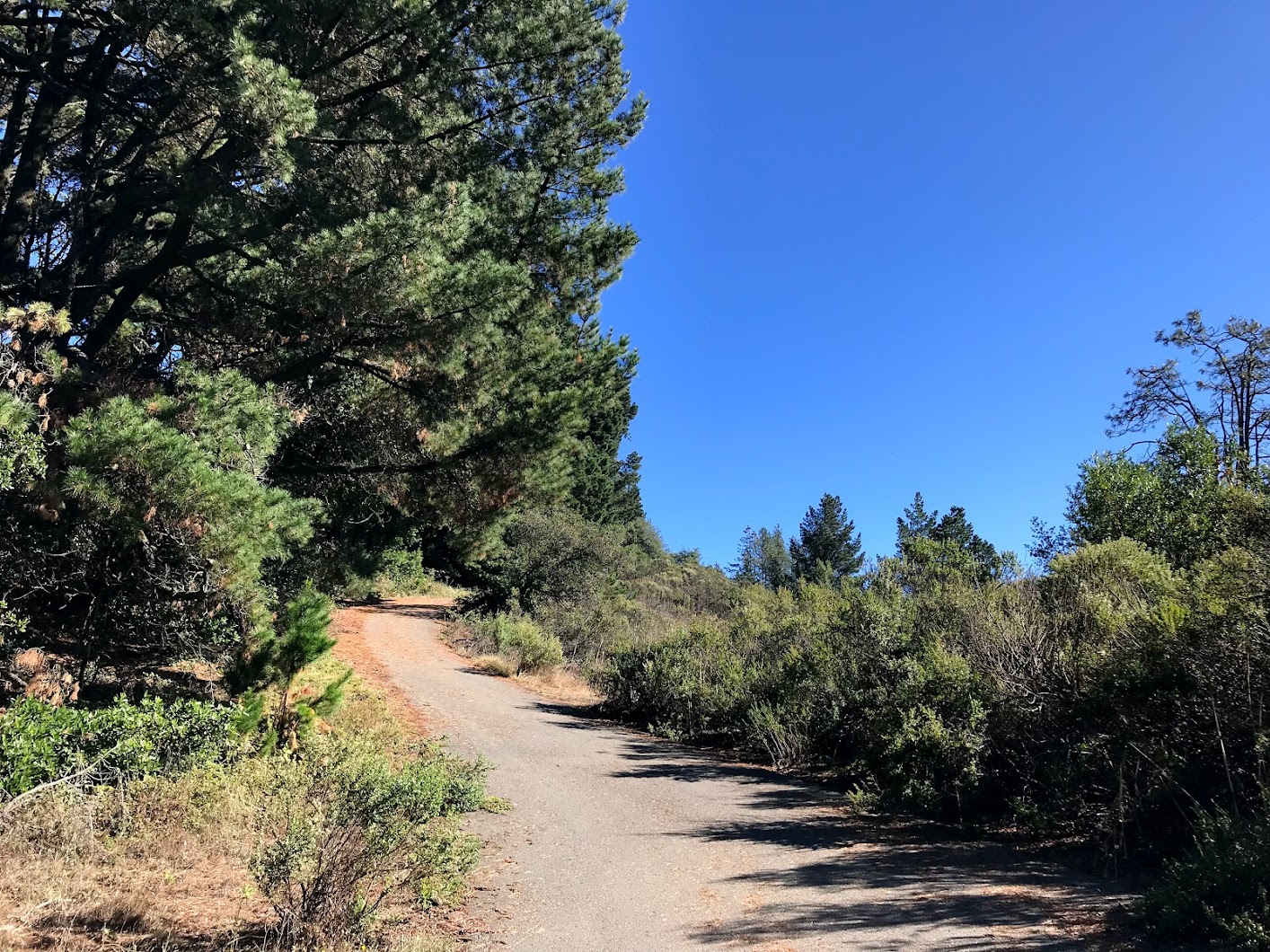 Final steep(ish) climb to the top of Vollmer Peak

A little bit more hiking (and taking off one of my shirts), and I was at the summit. 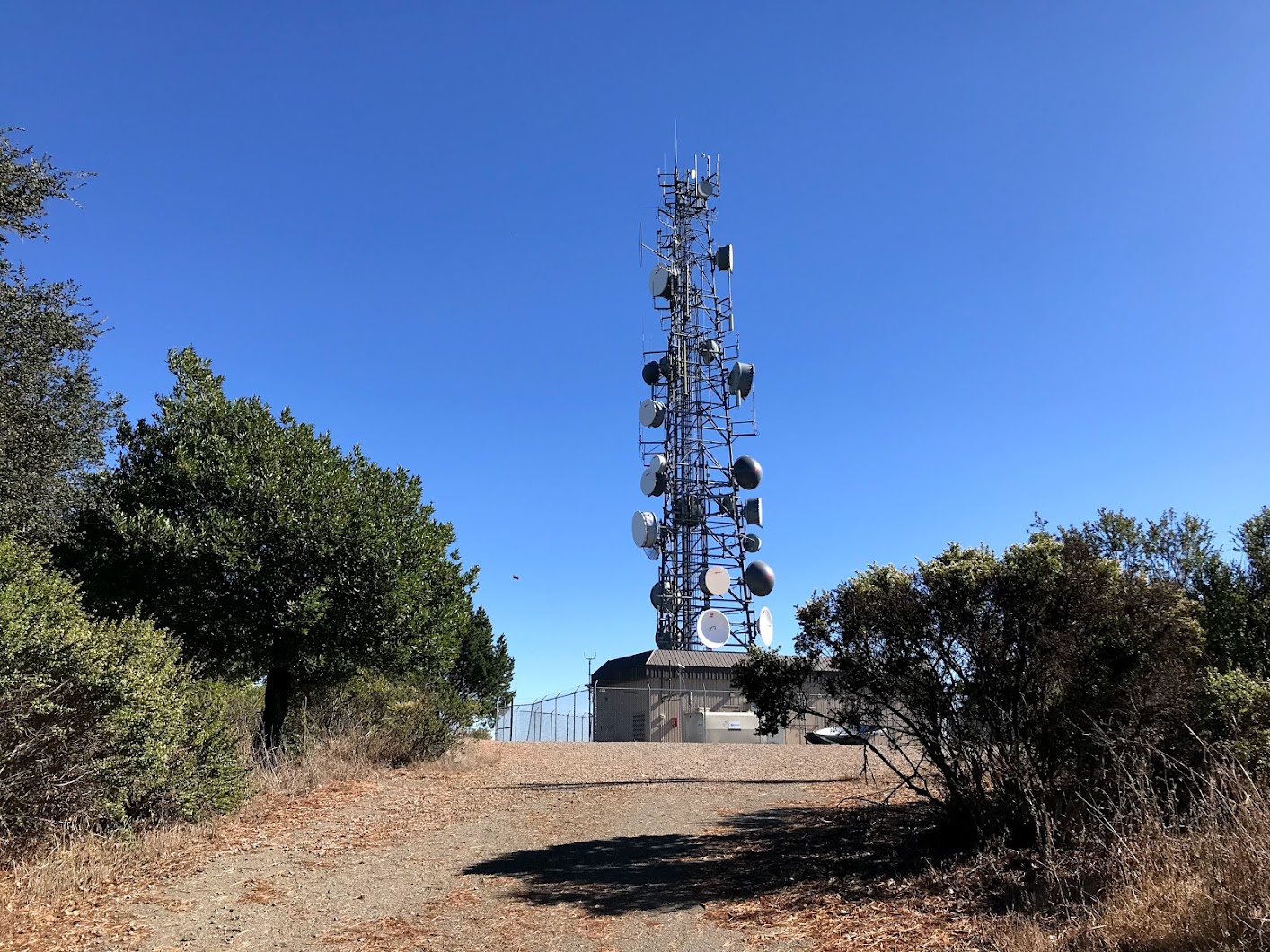 Approaching the summit of Vollmer Peak

After walking around the summit a bit, I decided to set up on the southeast side, away from a couple hanging out under a tree, and in a good position to get my signals out.  I haven’t rebuilt my end-fed antenna since losing it on Mount Whitney a couple of weeks ago, but I had my trusty SOTABeams linked dipole antenna.

It’s been months since I set up the dipole. I’ve gotten really used to throwing the end-fed antenna over a tree, and various other configurations.  With the dipole, it’s a bit trickier.  I put the feed-point on the pole, anchor the ends into the ground, then raise the pole (with its own guy line) in hopes the tension between the three lines will be just right.  With a flat space and no obstacles, this is really easy. With sloped ground, this is difficult.  Anyway, I got it up, such that it would stay up. The center was probably about 15 feet off the ground, near a steep slope to the southeast. I ran the coax cable over into the shade of the building on the summit and proceeded to get the radio ready to use. 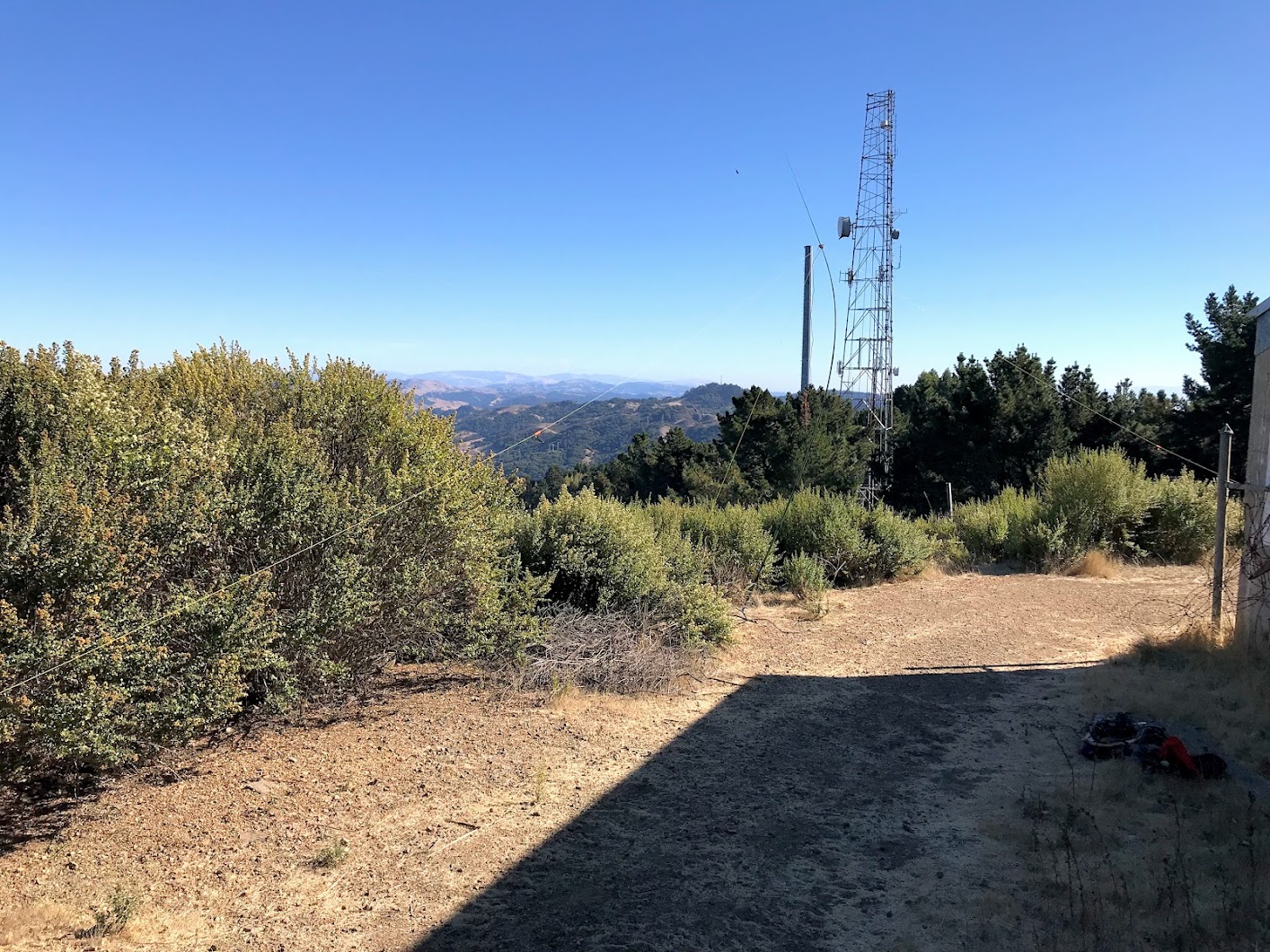 On my last activation (Mount Whitney), I had my regular Yaesu MH-31 microphone (the one that comes with the FT-817).  I haven’t finished unpacking from that trip, so I wasn’t really sure where that mic was.  I ended up bringing my custom headset interface which allows me to plug a 2.5mm cellphone headset into the rig.  I’ll be writing about this soon (it’s still in the testing phase). I had also brought my SOTABeams CW filter, in case I felt brave enough to try a CW/Morse Code activation.  However, I forgot to bring a paddle!  So I’d be sticking to voice for this activation. 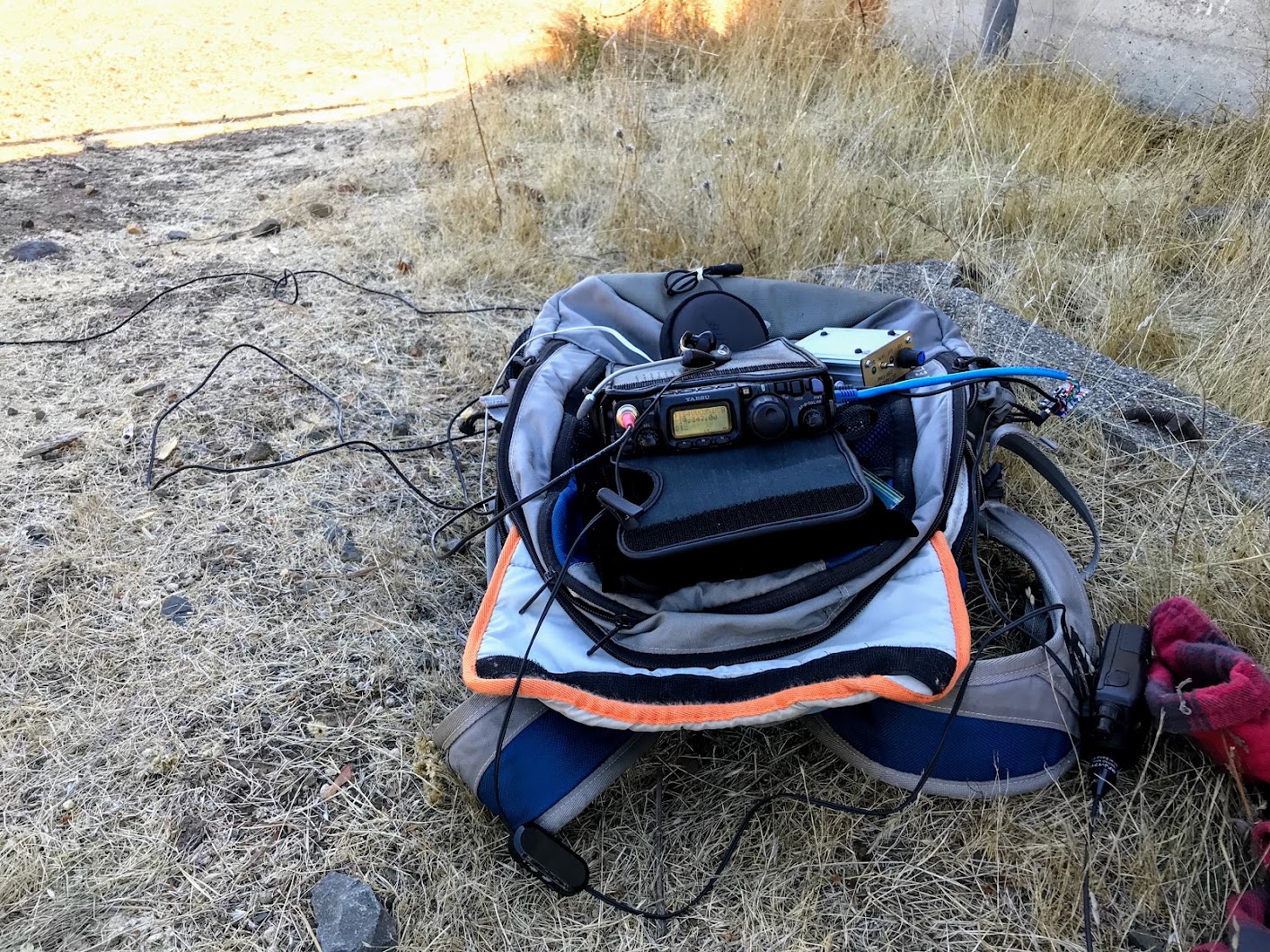 Since the antenna wasn’t as high off the ground as I’d like, I started with 20-meter operation. For some reason, the SOTA Goat app on my phone was having an error sending my spot, so I took the time to log in to the sotawatch.org site while calling CQ, and sent my spot from there. I used the VOX function of my radio, comfortably just speaking whenever I needed/wanted.  Within a couple of minutes, I was making contacts! First Gary W0MNA and Martha W0ERI in Kansas, followed by W2SE in New Jersey. I had to really work to pull W2SE out of the noise, but we were eventually able to get the full exchange done. Right after that, I got KH6RC—Hawaii! He must have been running power, coming in over S9. I could hear him like he was standing next to me.

Then, there was another somewhat weak station. I got the callsign and gave a signal report—W7DNK. He asked for my location again so he could point his beam antenna my way. I repeated it and on his next transmission, he was a lot clearer.  It turns out he was doing Jamboree on the Air (JOTA) and wanted to have a Cub Scout talk with me. Of course! He was up in Seattle.  I let him know that’s where I’m from and I chatted with him for a while (I think his name was Jacob, but I forgot to write it down).  The band began to fade a bit, so we wrapped that up.

I then switched to 40 meters and got one more contact there.  He was over in Half Moon Bay – about 30 miles away. I don’t think we had line-of-sight, so my super-low antenna was probably working NVIS (Near-Vertical Incidence Skywave). I called a few more times on 40 meters, with no answers.  I started packing up.

While packing up, I switched my HT on, tuned to 146.52. I didn’t hear any traffic, but once I was done packing everything up, I spotted myself on that frequency (146.52 FM) and started calling.  Right away, I got K6UDA.  At the time, I didn’t realize it other than his voice and call sounding familiar, but it’s Bob, the “Elmer with an Attitude” on YouTube!  After a brief QSO with him, I got a couple more brief QSOs.  Just as I was getting ready to leave, I heard Jeff AA6XA answer.  I had just seen him at the SOTA lunch, where we both talked about doing local summits after the lunch, with the possibility of a summit-to-summit.  He couldn’t really copy me where I was standing (now on the west side of the summit), so I told him to stand by while I walked to the other side.  Bingo!  We got the exchange done and wrapped up.

At this point, I felt like I had a nice complete summit activation, so I hustled back down the way I came!

Thanks to all the chasers! Hopefully I’ll be doing CW activations soon.