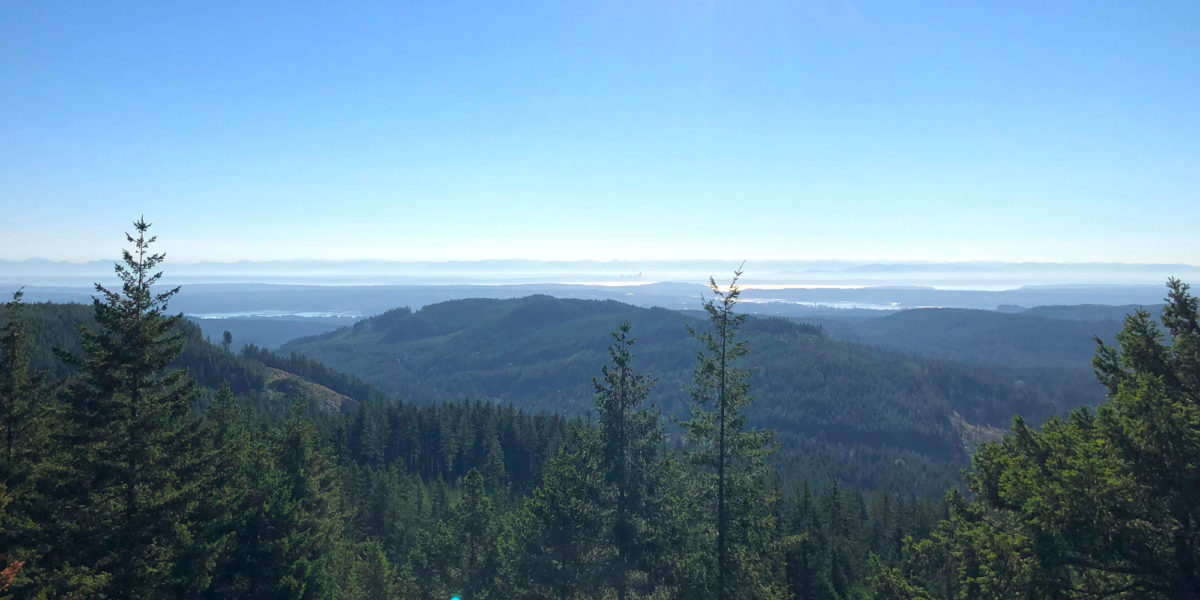 I was up in my home state of Washington (not DC) for a family wedding and wanted to squeeze in a little bit of SOTA fun.  This summit fit the bill, and also looked like it’d be really enjoyable, with a good view.  Too bad I injured my knee just a few days before the trip!  But not to worry: it turns out this summit has a drive-up option if you don’t mind a few miles of dirt road.

I was up in my home state of Washington (not DC) for a family wedding and wanted to squeeze in a little bit of SOTA fun.  This summit fit the bill, and also looked like it’d be really enjoyable, with a good view.  Too bad I injured my knee just a few days before the trip!  But not to worry: it turns out this summit has a drive-up option if you don’t mind a few miles of dirt road.

Since I’d originally planned on doing this summit as a hike, I put all of my planning into that.  So, when I decided I’d do it as a drive-up, I put almost no planning into the drive.  I mistakenly believed it would be completely straightforward as a drive-up.  Early in the morning, I put the destination into Google Maps and started driving from Gig Harbor, about 45-minute drive from south of the summit.  My route took me northeast of the summit, then it hooked west onto NW Holly Road.  Turning left again onto Rock Quarry Road, I ran into one of my first problems. 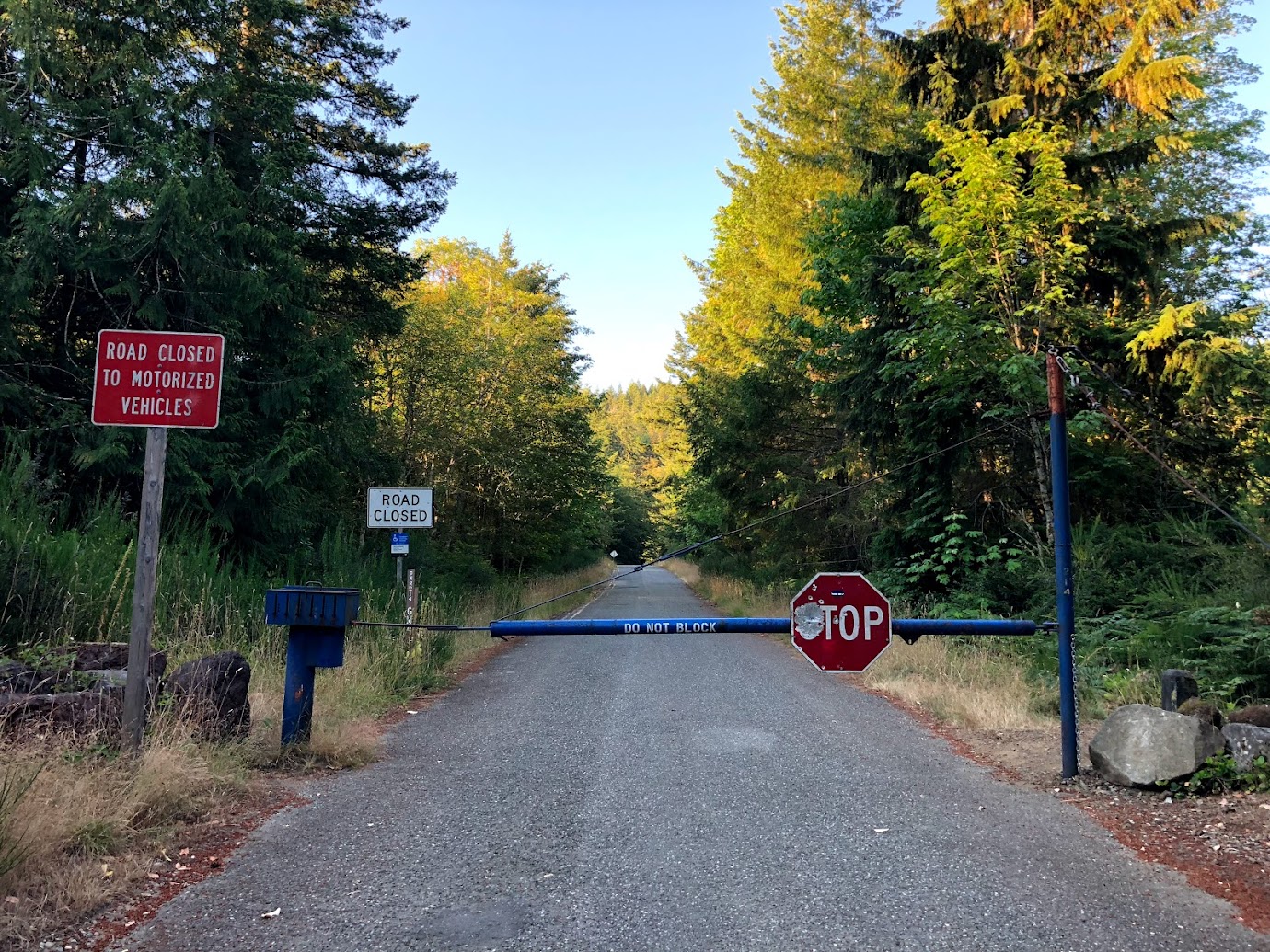 I think this would have been a bit too far to cover on foot. I realized, too, that I had the wrong destination put into Google maps. There’s a nearby “hiking lookout” marked on Google Maps, a little bit to the east of the summit. OK, maybe quite a bit east of the summit.  Anyway, I realized my error and corrected it.  Still wanting to try and make it to the summit quickly, I hustled over to the next possible road to the summit, a little further west. This one was called “Green Mountain Rd NW.”  This route went by some houses and didn’t quite seem right, but I kept going since the name seemed to indicate I had the right road. 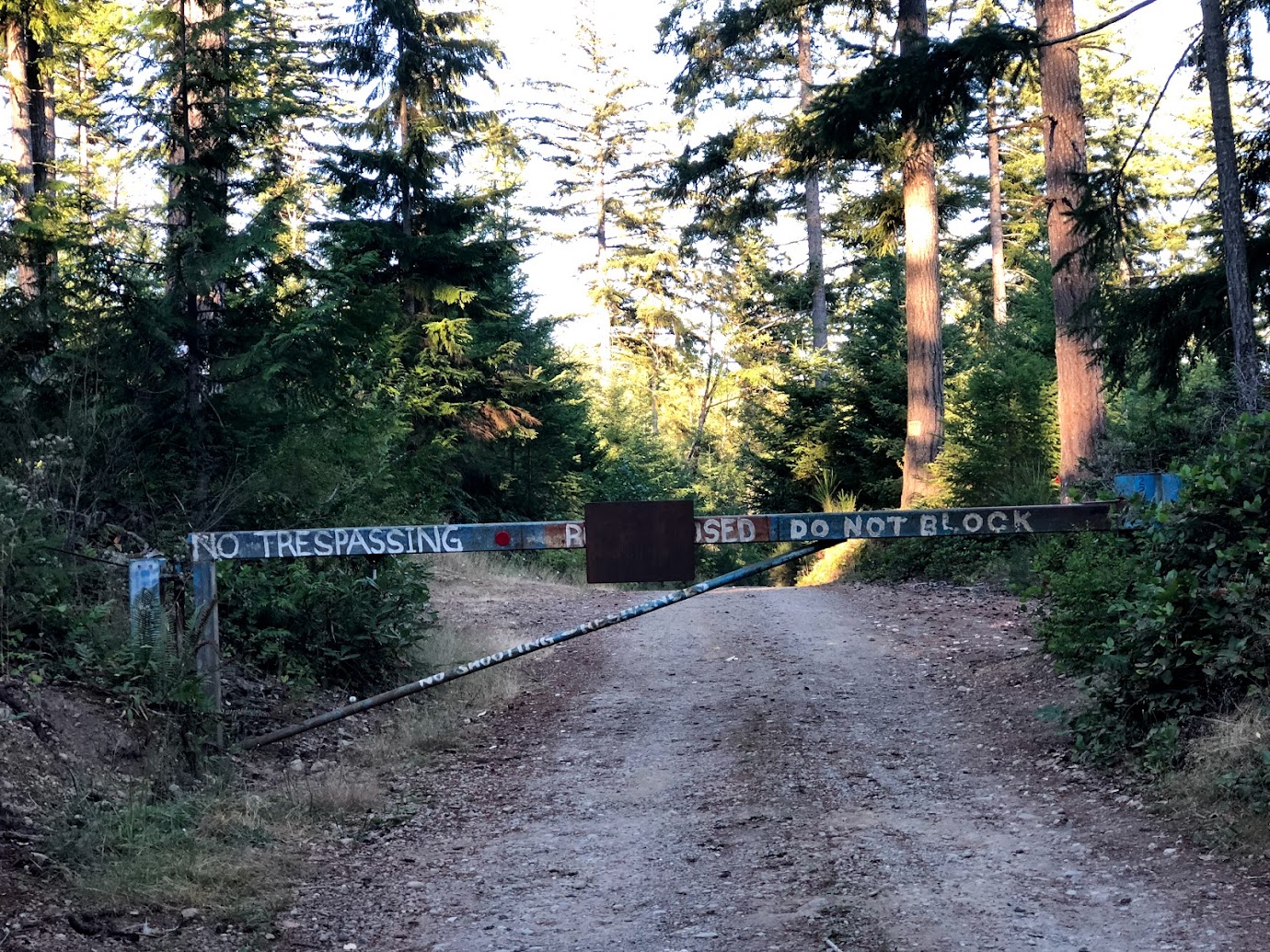 Nope. Not this way, either.

This was a little more awkward – I had to back up quite a bit before I could turn around.  But I did manage to turn around and get out of there. By this time, I didn’t have any cell service, so I couldn’t just look up where the heck the correct road was. I got back out to NW Holly Road and headed west again, turning left on Lake Tahuyeh Rd NW.  I had a pretty good hunch that the correct road approached the summit from the west.  Either that, or the seasonal closure of the road had turned into a permanent one.  I eventually found the correct entrance. 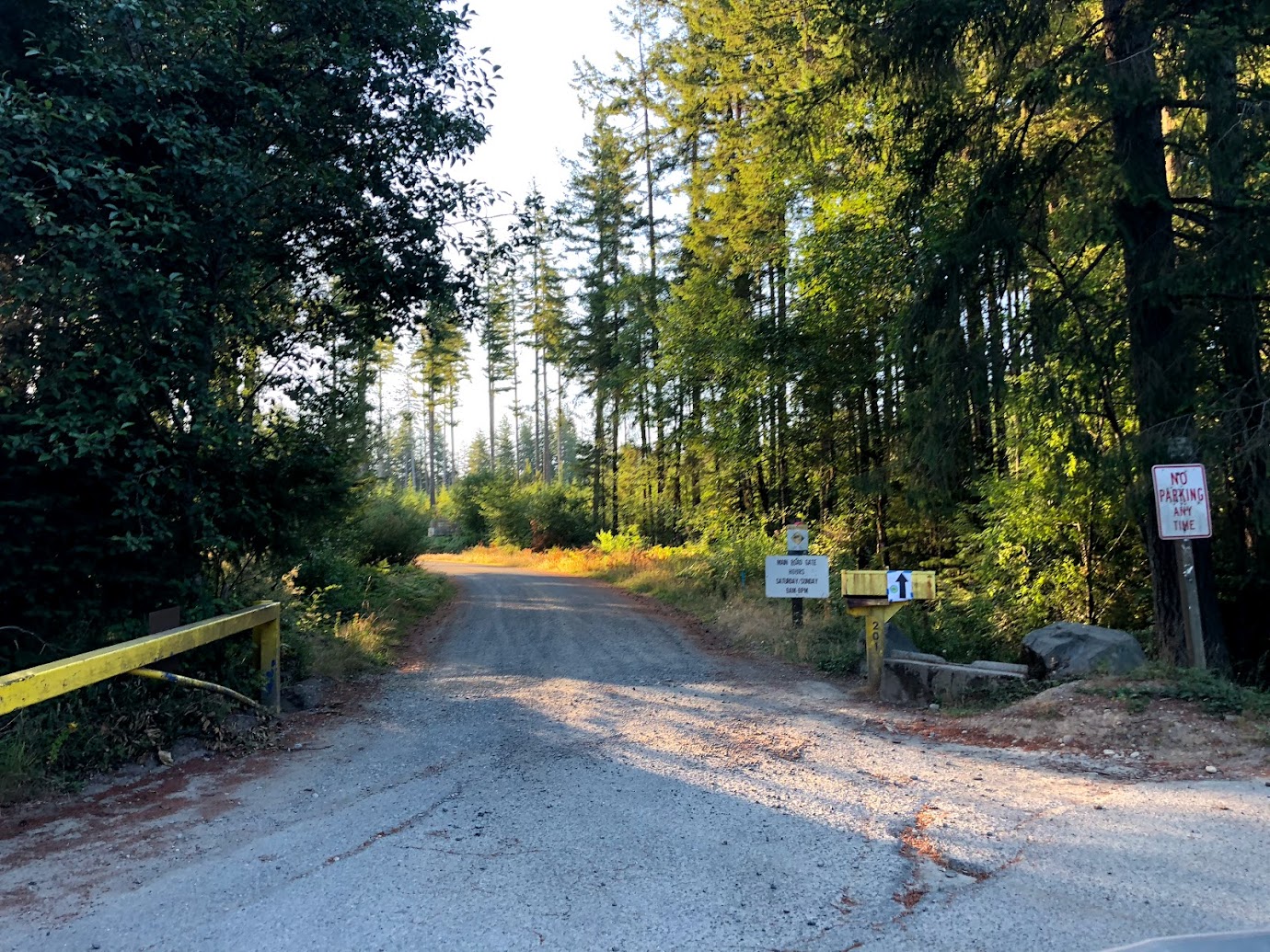 The road to Green Mountain (sorry for blurry pic)

This is the road you’re looking for.  As it turns out, not only is the opening of this gate seasonal (summer), it has hours—9am-6pm Saturday-Sunday only. Fortunately for me at 7am on Sunday, the gate was already open.

From this point on, I primarily used intuition, mixed with an occasional sign. For the most part, I just followed the parts of the dirt road that seemed most heavily travelled. A little under 4 miles later, I was near the summit of Green Mountain. Parked near the summit 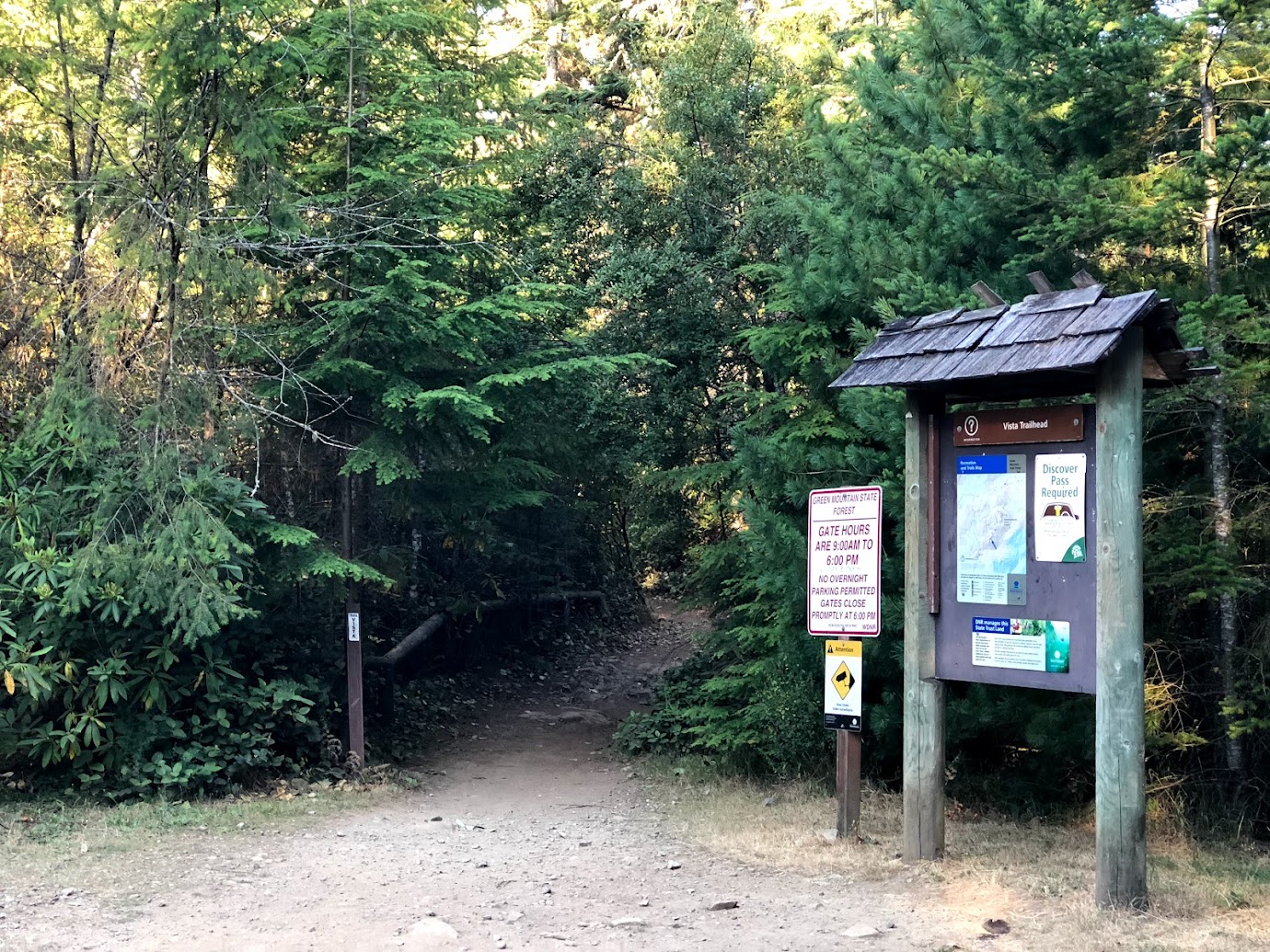 Trailhead at the end of the parking area on Green Mountain

Even though I’d done a hike of Little Si the day before, I was a little apprehensive of the hike. I didn’t know if it would be super-short, but I’d heard it was short and easy. I wasn’t disappointed. There was one slightly steep and loose section. Nothing I’m not used to. 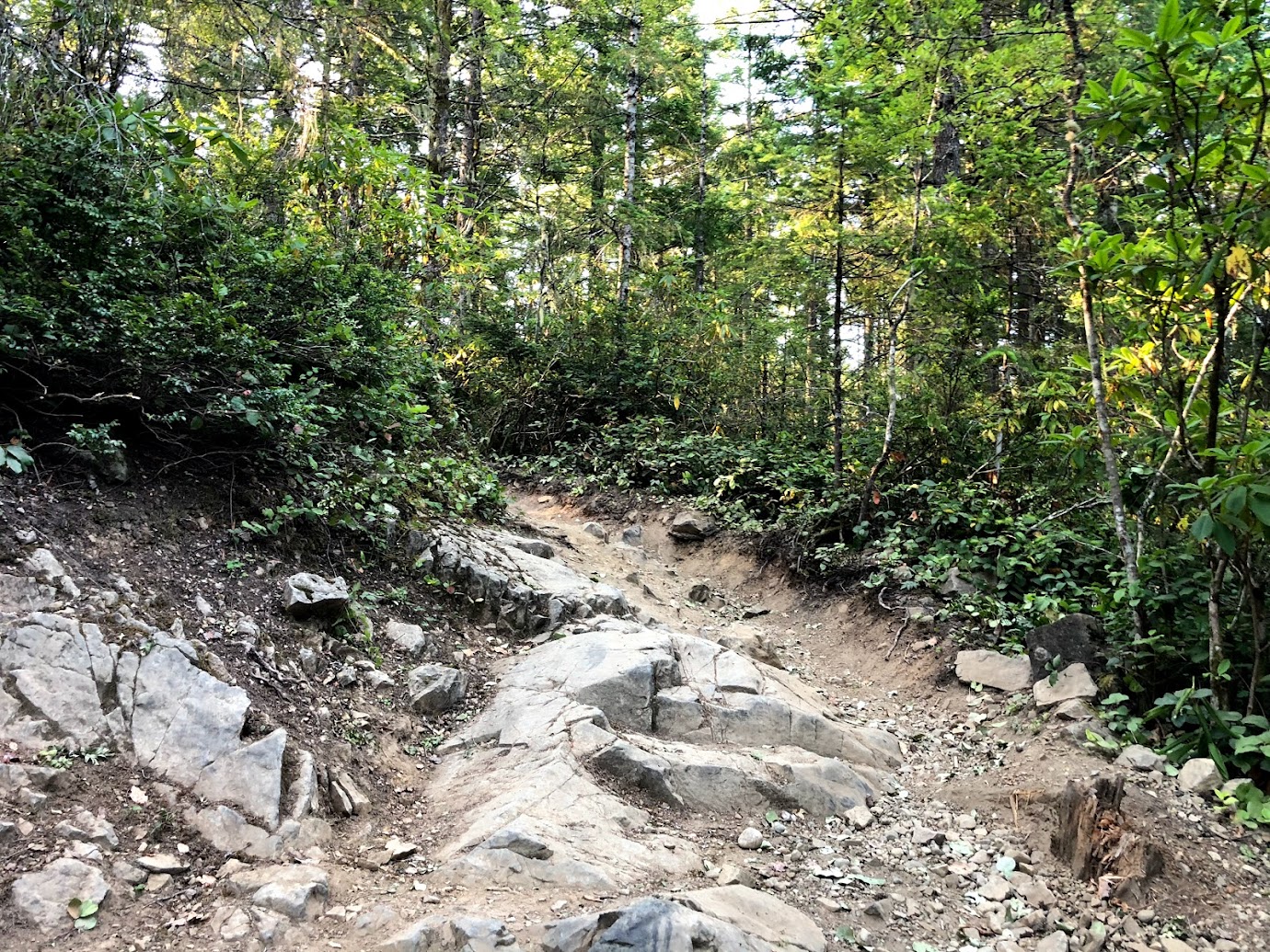 The hardest part of this short walk on Green Mountain

After just 5-6 minutes of walking, I was at the top. 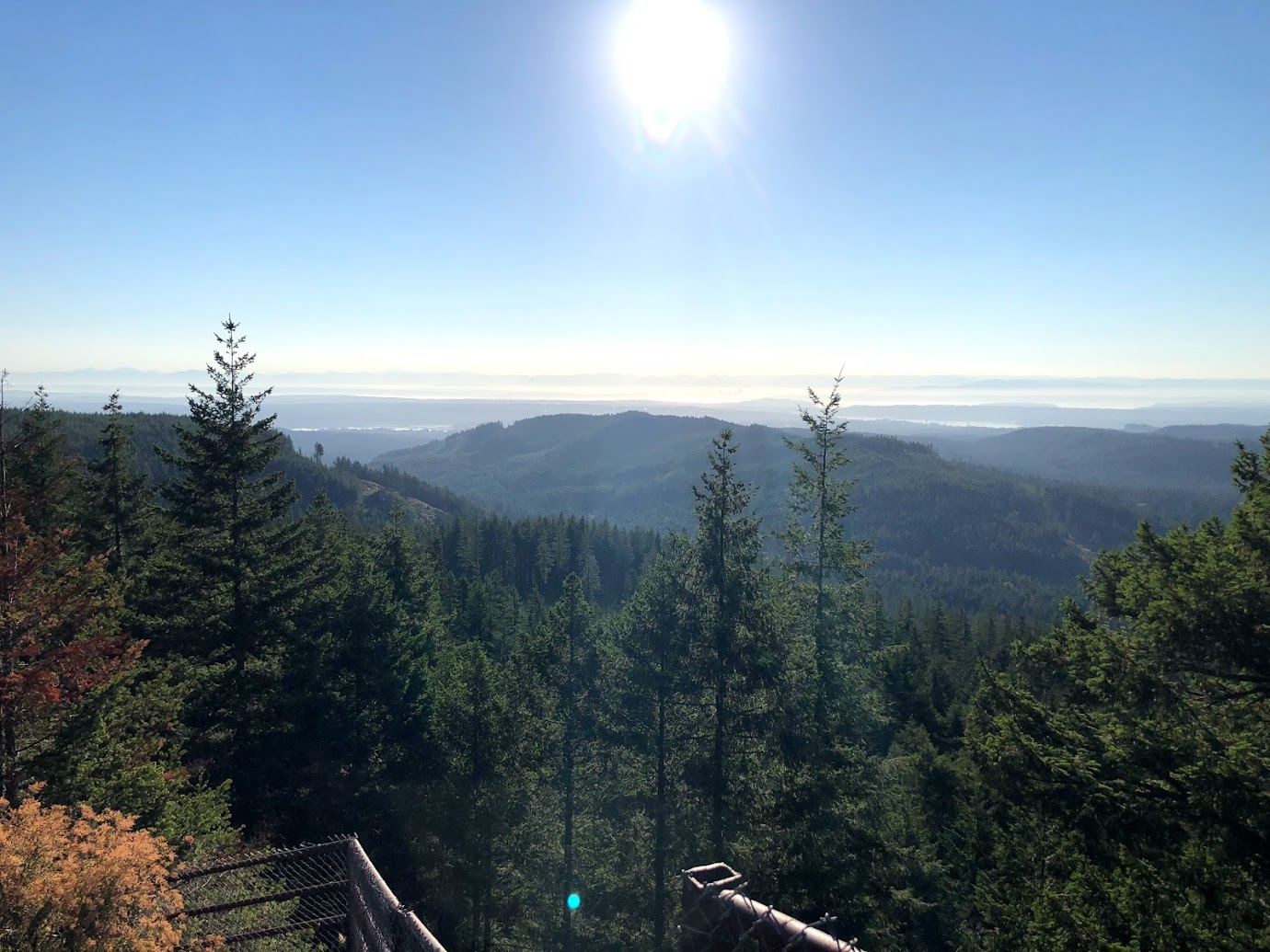 Looking east toward Seattle from Green Mountain near Bremerton

The top has a few picnic tables and lots of trees.  There’s a fence where the lookout is, presumably to keep people from falling off the cliff. Apparently, the true summit is just a little bit south of here, but a bit tricky to get to.  This part of the summit is well within the Activation Zone (AZ), so I just stayed here.

After enjoying the views a little bit, I threw my EFHW wire high up into a tree on the west side of the summit, sloping down to a picnic table in the middle of the summit area.  I hooked it up and got to work.

I made several contacts on 40 meters, using my MTR-3B.  I then switched to 20 meters and made twice as many contacts there—including a summit-to-summit (S2S) contact with George KX0R over in Colorado.

Then, I pulled out the FT-817 and made 5 more contacts on voice/SSB.  I love CW the most, but it’s fun to hear voices once in a while! 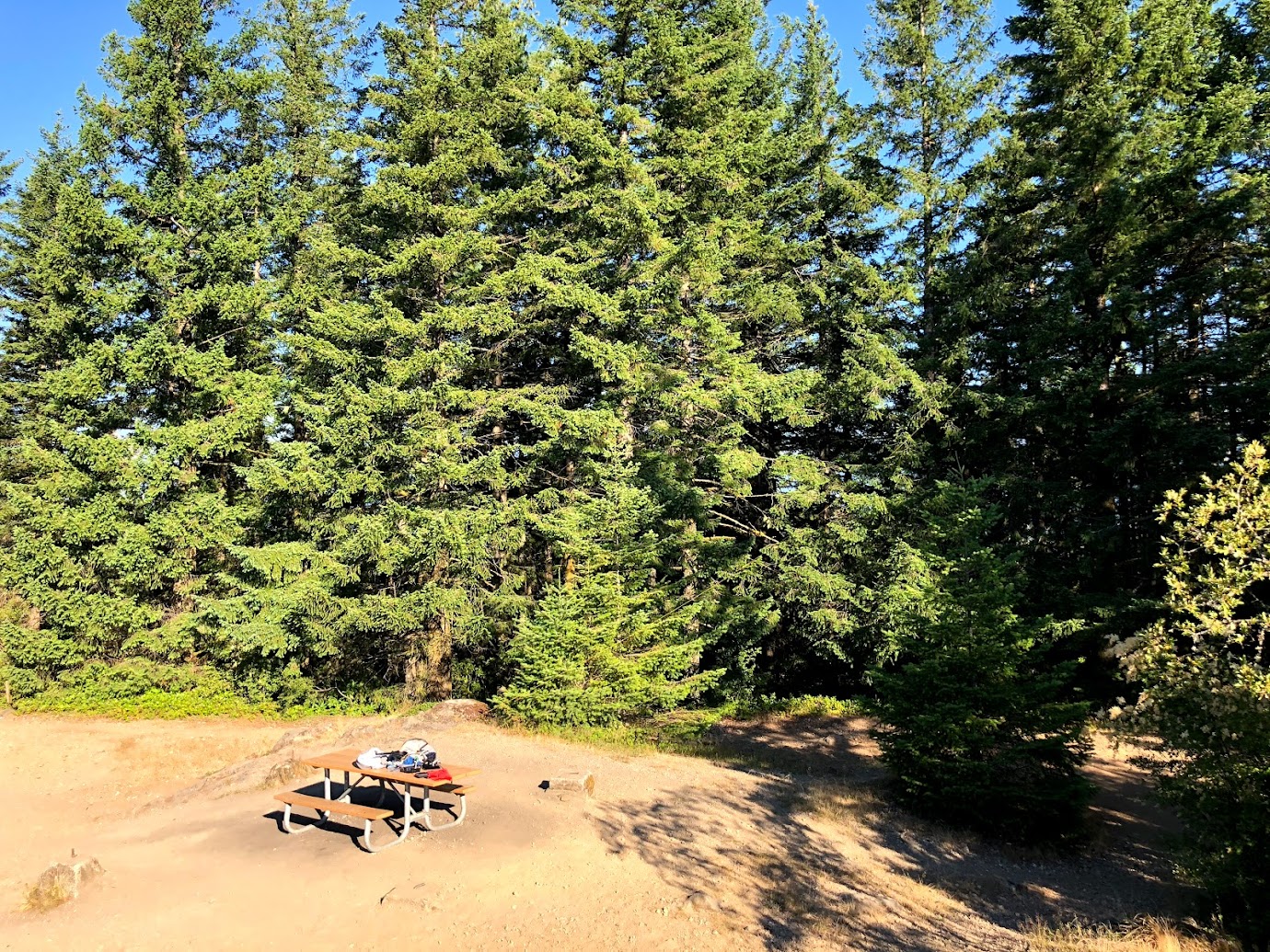 Having finished getting contacts on 20 meters, I briefly considered doing 30 meters, but figured I better get going.  The family wedding was later that day!